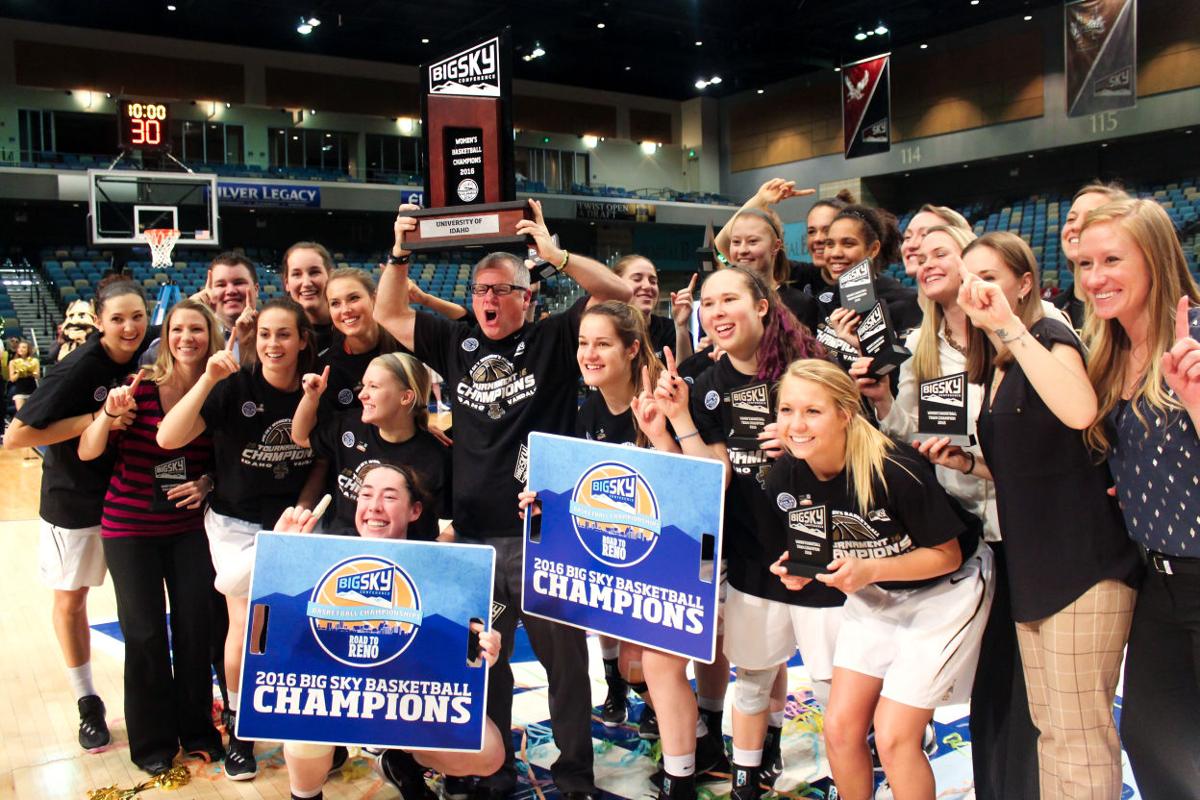 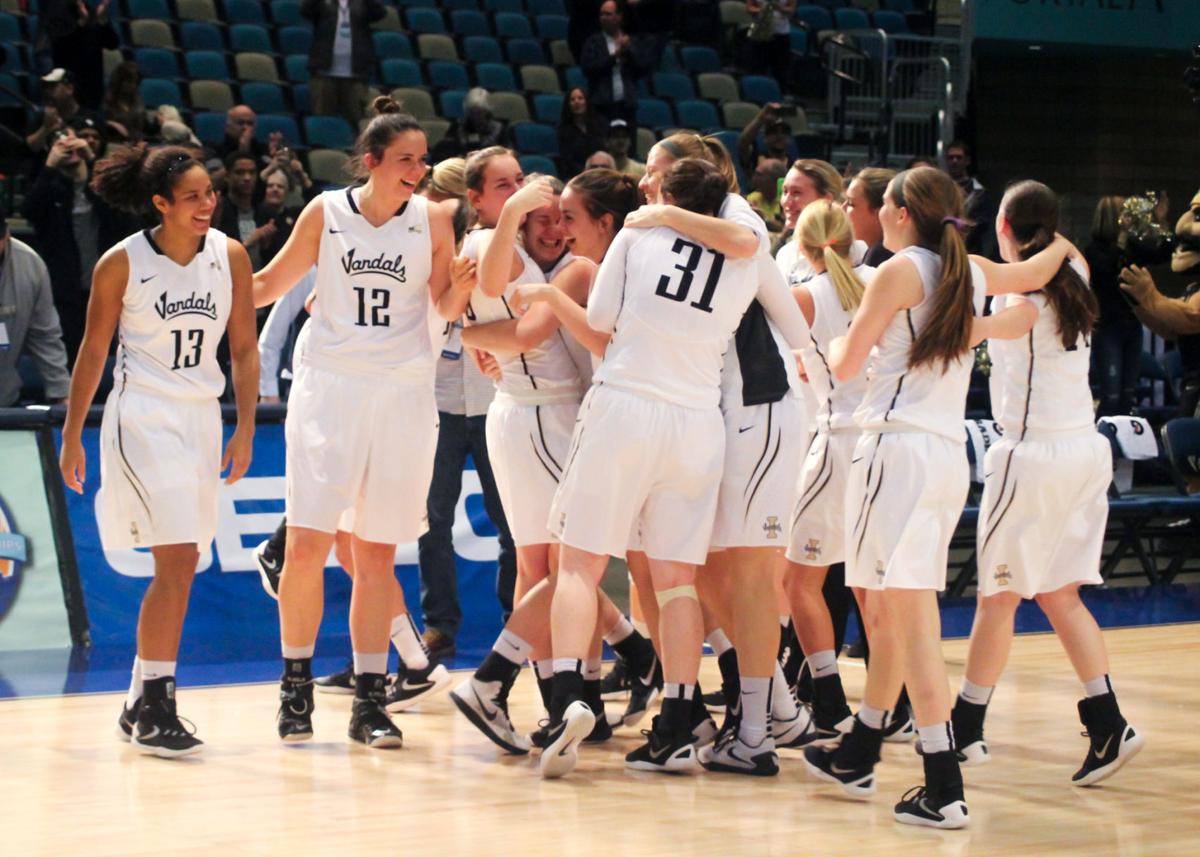 RENO, Nev. — Before the hugs, before the smiles and cries, and before the trophy-hoisting, picture-posing and net-cutting, the Idaho women’s basketball team had to come to a realization: This could be the end.

Trailing Idaho State by three at halftime Saturday in the Big Sky Conference tournament title game, the Vandals understood they were 20 minutes away from falling short of their season-long championship aspirations.

So they channeled the type of lockdown defense and knockdown 3-point shooting that carried them all year long, which is why when the confetti began to fall at the Reno Events Center, the scoreboard read Idaho 67, Idaho State 55.

And for the third time in four years, the Vandals, who won the Western Athletic Conference in 2013 and ‘14, were conference tournament champions and owners of an automatic bid to the NCAA Tournament.

“It feels so good,” freshman Mikayla Ferenz said. “We wouldn’t be here without any of our seniors; they’re such great leaders. It was such a great experience. I couldn’t ask for a better freshman year.”

She couldn’t have played better, either. Ferenz was named tournament MVP after nailing a record setting 16 3-pointers in three games while averaging 22.3 points.

“Coming into this they said nothing feels better than winning the conference tournament,” Ferenz said. “It’s true.”

Ferenz and senior forward Ali Forde led the offensive eruption that denied ninth-seeded Idaho State any chance of upsetting the third-seeded Vandals (24-9). The two combined for the team’s first 14 points of the second half, transforming a 26-23 halftime deficit into a 37-30 lead in five minutes.

The Bengals (18-15) never cut it to fewer than seven after that. They hit four desperation 3’s in the final two minutes to make it interesting, but they never really had a chance once Idaho turned it on. Idaho was 5-of-8 from 3 in the second half.

“We have 20 minutes left of basketball. I’m a senior. I want to win,” Forde said of her mindset in the second half. “I just went out there and did what I had to do to win.”

She did everything, really. The 6-foot-2 post scored eight of her 12 points in the second half and finished with 13 rebounds, a career-high eight steals, four blocks and four assists to earn a spot on the all-tournament team and cap a nearly perfect four-year Vandal career.

“Three out of four feels pretty good,” said Forde, wearing the same smile she had moments earlier when her team danced, cheered and mobbed one another to celebrate finally accomplishing their goal.

It took 18 points from Ferenz, 11-of-12 free throw shooting down the stretch from Karlee Wilson and the sharpshooting of senior guard Christina Salvatore (13 points, 3-of-6 from 3) to get it done.

They outscored ISU 44-29 in the second half, holding the Bengals, who had thumped them in the regular-season finale, to 30-percent shooting for the game.

“My guys just dug deep. These guys were refusing to lose, I can tell you that,” coach Jon Newlee said after beating the school he coached at for six seasons — and took to the NCAA Tournament — before joining the Vandals. “Our seniors, they’ve been through it and they know what it takes. You got freshmen with ice water in their veins. Fantastic effort today.”

This is the fourth time Newlee has earned a trip to the big dance. His team will stage a selection-show watch party Monday as it awaits its postseason destination.

Saturday was a bit personal for Newlee. His departure from ISU in 2008 was controversial, and his two returns to Pocatello since then have been equally dramatic.

He said after the game that he and his players were being “verbally abused” from behind the bench by a group of Idaho State fans earlier in the year, then added that the same group was at it again Saturday.

“It was good to stick it to those ignorant people who were back there behind my bench in Pocatello,” Newlee said. “All I did was win there — and leave there. They’re still bitter about it eight years later and that’s their problem. Certainly not my problem. I’ve moved on, man. I’m a Vandal. Three out of four years, that’s pretty good.

“They said, ‘Is the grass greener?’ Yeah the grass is greener in Moscow. Three.”

But no amount of negativity was going to erase his grin. Not the won he sported while accepting the championship trophy, or the one he had after placing the net around his neck. And definitely not the one he had when his team showered him with Gatorade in the locker room.

“It’s a little chilly right now but that’s all right,” he said, “I’ll take it any day of the week.”