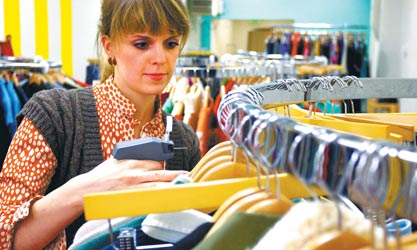 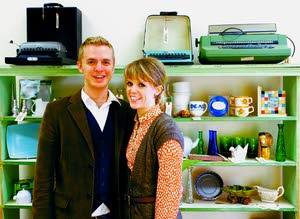 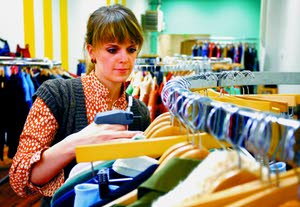 Austin and Laura Storm have always thrived on the thrill of the hunt.

In their case, the Moscow residents are in search of the perfect tie or skirt to add to their closets.

"I prefer to buy secondhand and find something unique," Laura said.

"There's something serendipitous about the thrill of the hunt for something at a yard sale or a thrift store," he said.

There is more to it than going to a store like Old Navy and picking out a sweater that half the people on the Palouse will be wearing, he said. The two have always loved the vibe of consignment shops in bigger cities, like Buffalo Exchange, and their dream has been to open up their own consignment shop with a similar atmosphere.

They opened up The Storm Cellar in downtown Moscow last weekend and will have a grand opening Dec. 2 during Moscow's Holiday Parade.

The long, narrow space is the former Pita Pit space at 212 S. Main St. and includes a variety of men's and women's clothing, knick knack. It eventually will include children's clothing.

The Storms have spruced up the space, which will eventually include fitting rooms, and Austin and his friends refinished the hardwood floors one

The knick knacks are cute but quirky like a rhinoceros-shaped butter dish, paper crane shaped soy sauce container, typewriters and other items, and will soon be joined by some new gift items the Storms plan on carrying in their store.

Austin moved to the area five years ago to attend New Saint Andrews College and Laura has lived in the area for the past 15 years.

Opening up a consignment shop had been on the two's life list since they met and in May, they decided to go for it.

"I yard saled a ton," Laura said. "Friends and a bunch of people also brought me stuff."

They looked for a space over the summer and then started to revamp the location the second week of October.

"There was nothing like this in Moscow," Austin said.

There are thrift stores, and Pullman has consignment shops, but they wanted to bring out a different feel.

Within the first three days of opening, the Storms said they already have 40 consignors.

Laura said she is selective with the clothing she chooses to carry in the store.

All secondhand clothing must be name brand and either within three years old or a vintage item.

"That's my favorite part, going through stuff," she said.

Not taking some of the items for herself has taken some willpower, and sometimes the Storms say its hard to part with them.

The Storms said they also eventually would like to sell local arts and crafts at the store.

They are also planning on having an art opening with work inspired by classic children's stories like Pippi Longstocking and Hansel and Gretel.

The Storms said the average price for a clothing item is between $10-12 and items are usually marked at one-third to one-half of their original cost. Consignors get 50 percent of the price and are entered into a computerized system.

Consignors are alerted by e-mail when their item is sold.

So far clientele hasn't included many college students, but the two say they look forward to bringing them and their gently used clothing into the shop.