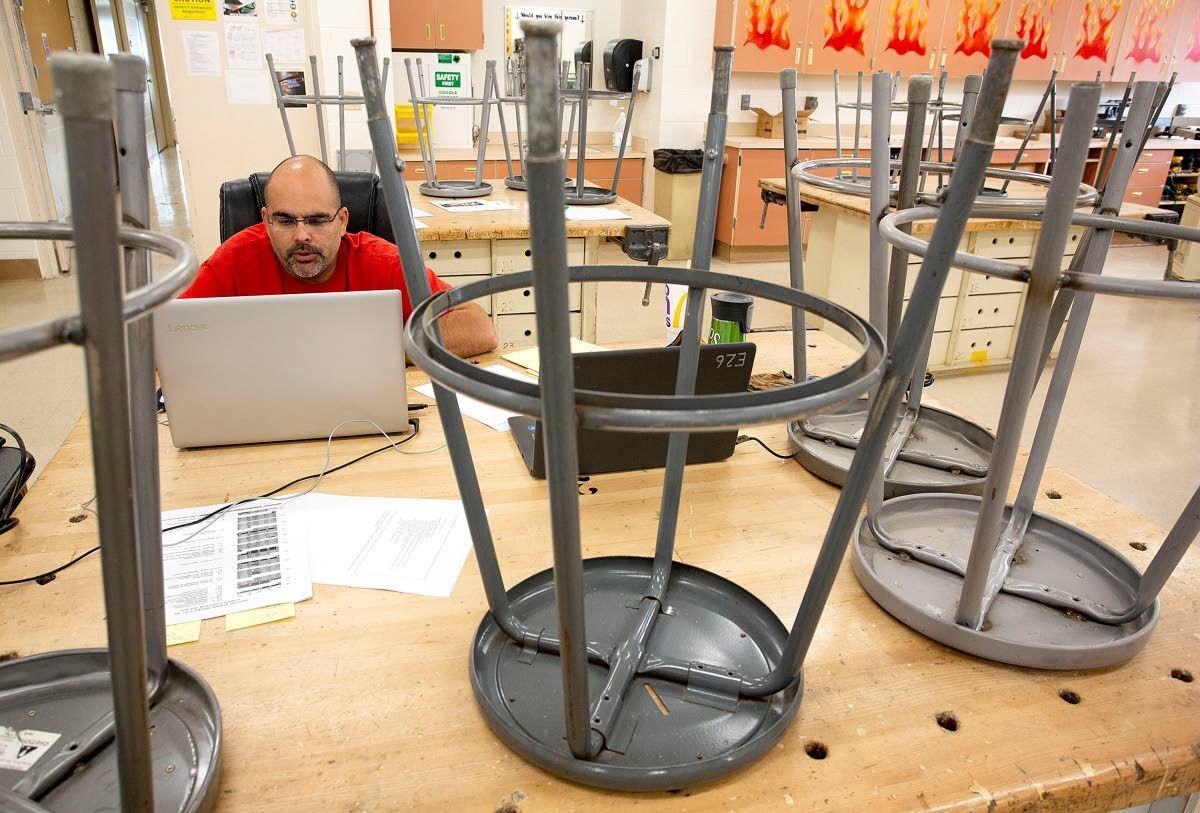 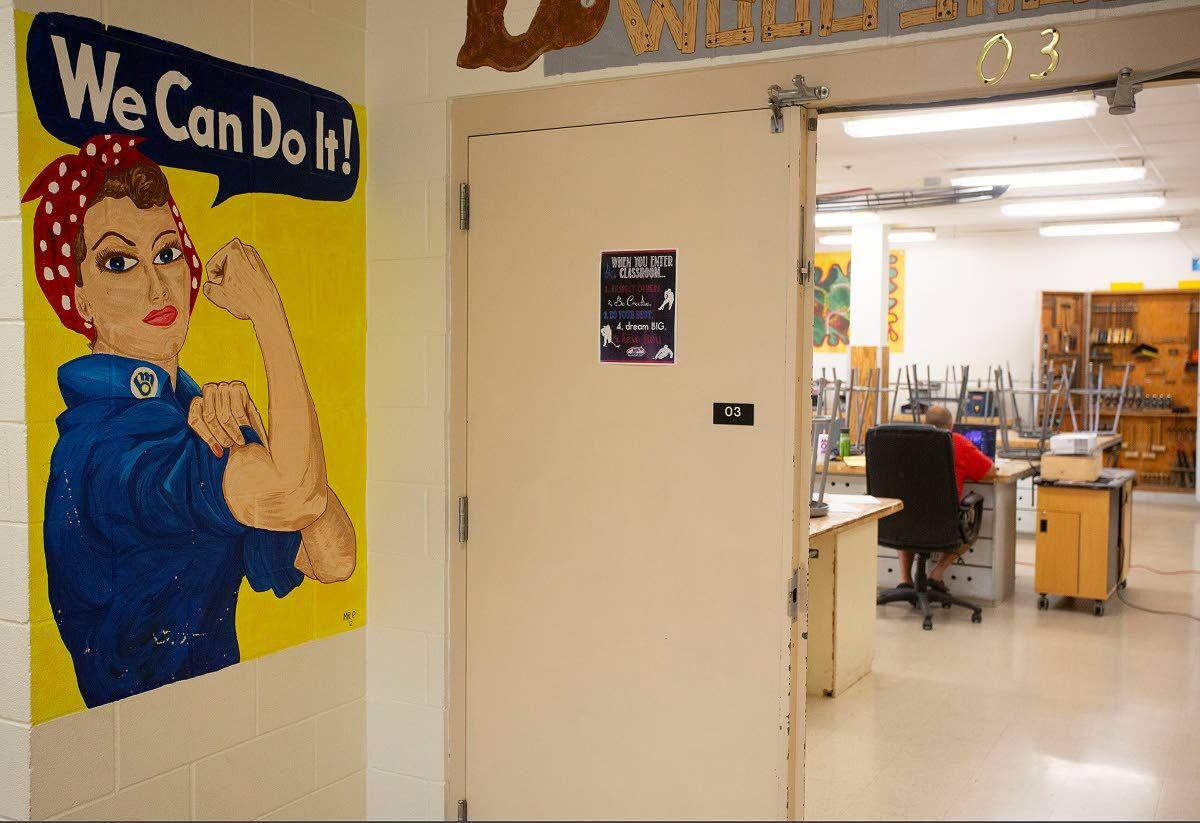 A Rosie the Riveter mural stands outside the classroom while shop teacher J.D. Poulos teaches his Introduction To Communication Technology class online on the first day of school Wednesday at Moscow Middle School. 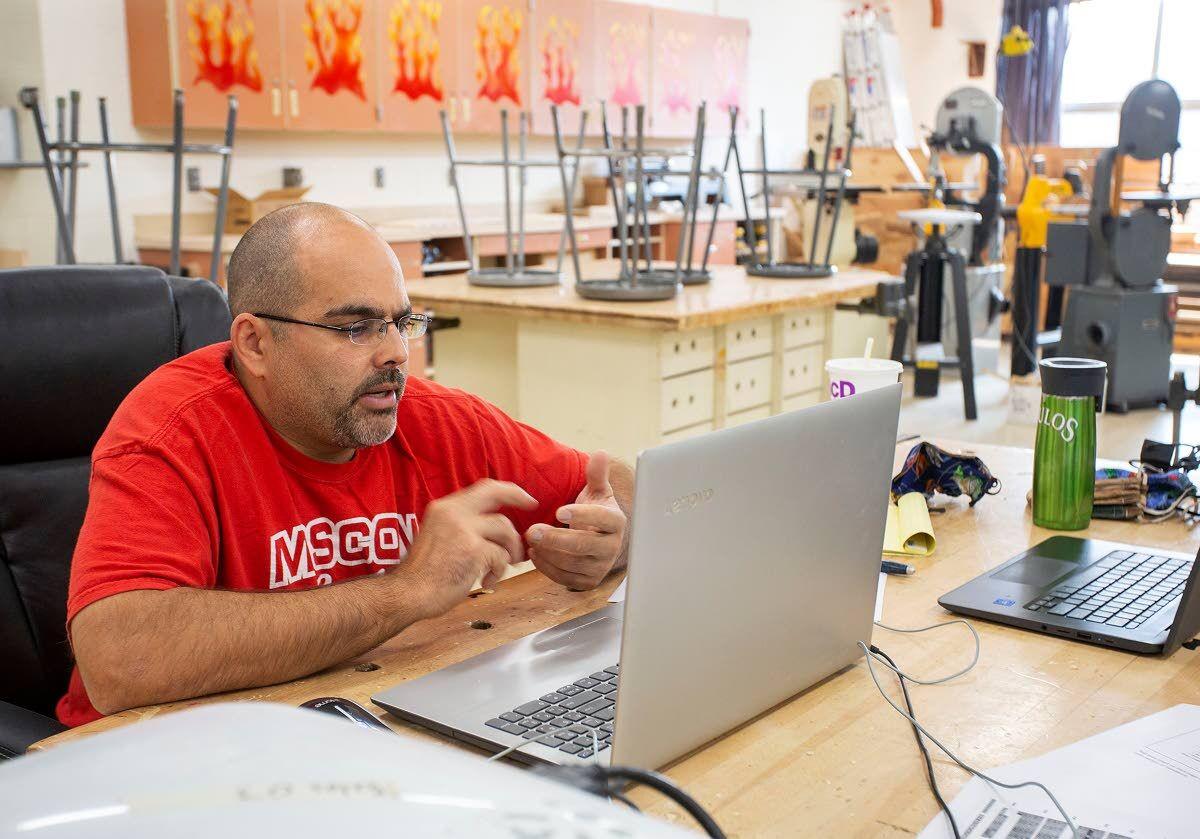 A Rosie the Riveter mural stands outside the classroom while shop teacher J.D. Poulos teaches his Introduction To Communication Technology class online on the first day of school Wednesday at Moscow Middle School.

After postponing its first day of classes two weeks because of COVID-19 followed by another two-day delay because of poor air quality, the Moscow School District on Wednesday finally opened its doors — in a manner of speaking.

“When the weather advisory says that the outdoor air is hazardous and to even limit your indoor activity, that’s probably a really good cause to delay things,” high school English teacher JoyAnn Riley said. “As obnoxious as it is, I think it’s the right call to make to protect the safety of the students and the staff.”

In early August, the Moscow School Board voted to begin the school year two weeks later than usual with a hybrid instructional model. The so-called “AA-BB” hybrid model describes a system with two cohorts of students, labeled “A” and “B,” that attend class in person on different days. “A” students attend in-person classes Mondays and Tuesdays, and “B” students are in school facilities Thursdays and Fridays. Instruction will be delivered online for the remaining three days with all students learning from home Wednesdays.

Though many teachers have been preparing all summer to deliver education at a distance, Moscow Superintendent Greg Bailey said the smoky skies and school closures have caused a bit of turmoil with the district’s start of year plans.

“It made it a lot harder — if we would have had a week of instruction before the smoke hit, that would have been much better,” Bailey said. “Our staff is really working hard on it and you’ve got to appreciate what they’re doing but we’re really looking forward to having the kids in the class, too.”

Despite the year’s off-kilter kickoff, many teachers reported their first day went more smoothly than one might expect. Riley said her students spent much of their first day learning how to use the district’s new online learning management system, Canvas, and it’s gone fairly well.

“Today is kind of a day to prep kids and try to iron out any kinks in the system and give it a good test run, so that we know where technical issues are cropping up,” she said.

Ashley Gingras, fourth-grade teacher at Russell Elementary School, said her live morning meetings with students through the teleconferencing service Zoom also went surprisingly well, noting she had nearly full attendance. She said students were in good spirits and toward the end of the meeting, they even gave a little cheer, as a group, to celebrate the start of the year.

Gingras said the major challenge was to make the day special for her students, even though they can’t be in the same room together. She said she plans to use Zoom conferences as an opportunity to help students build relationships with one another and to connect with them as a group for social-emotional lessons.

“That’s going to be my primary focus with these Zoom calls — the next couple of weeks we’re going to be mostly focusing on just making a connection and trying to build some sort of a community,” Gingras said. “They won’t really have that in the classroom being spread apart and not being all together ever in the classroom, so that’s my primary focus right off the bat.”

In a message sent to parents Wednesday afternoon, Bailey announced instruction at Moscow Schools would continue to be delivered online through the end of the day today in response to poor air quality.

He said the last thing anyone wants is further delays to returning to in-person classes, but poor standards for health and safety have negative effects not only on student wellbeing but also on the quality of their education. It’s much harder for a student to learn when they’re worried about their safety, Bailey said.

“You can’t learn when you’re in a state of fear,” he said.

“My number one concern is the safety of the kids, number two is that the kids have a sense of belonging at their school and then the third one is education,” Bailey added. “The fourth is extracurricular and the fifth is making them good citizens when they’re gone.”

In his Wednesday announcement, Bailey said all after school activities have also been canceled for the time being. However, a grab-and-go lunch program developed for days when students attend class remotely, will be in operation starting today. Students picking up meals are instructed to immediately return home and to limit their time outside.