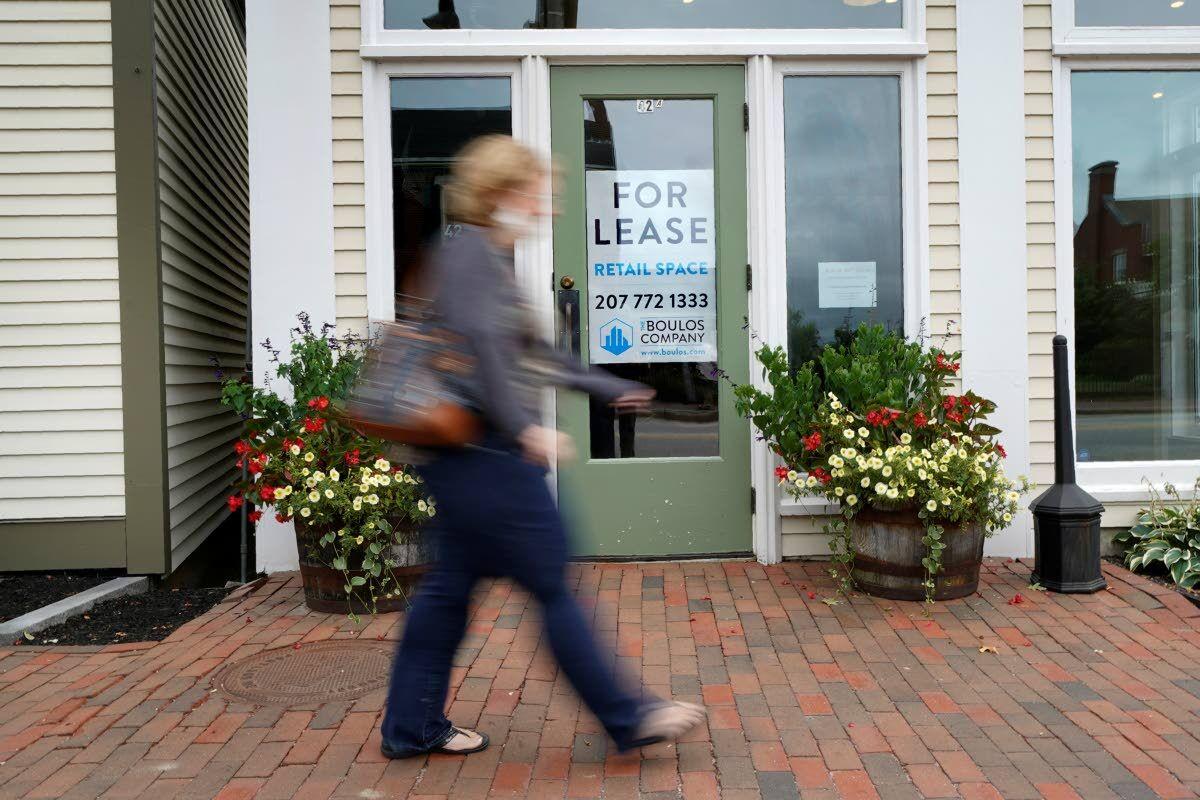 A shopper walks by one of several vacant retail spaces among the outlet shops in Freeport, Maine, on Sept. 2. The U.S. unemployment rate dropped to 7.9 percent in September, but hiring is slowing and many Americans have given up looking for work, the government said Friday. 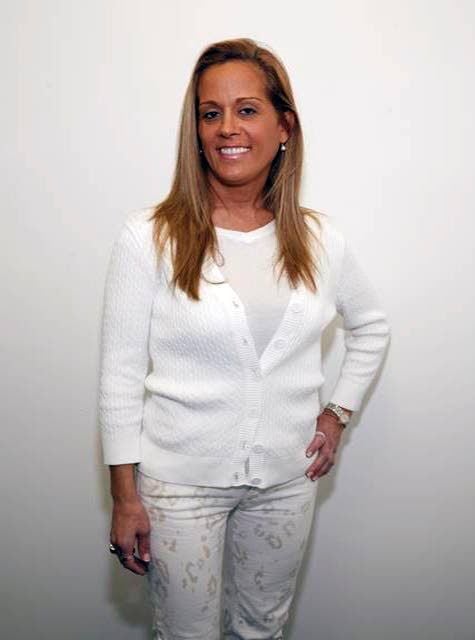 This photo provided by Sofia Valiente shows Magdalena Valiente. This spring, Magdalena Valiente was expecting the best year of her three-decade career as a concert promoter. Now, at age 52, she wonders if that career is over. She is relying on unemployment benefits and Medicaid and has applied for food stamps. Work has dried up. And she has lost hope that the crisis will end soon. (Sofia Valiente via AP)

A shopper walks by one of several vacant retail spaces among the outlet shops in Freeport, Maine, on Sept. 2. The U.S. unemployment rate dropped to 7.9 percent in September, but hiring is slowing and many Americans have given up looking for work, the government said Friday.

This photo provided by Sofia Valiente shows Magdalena Valiente. This spring, Magdalena Valiente was expecting the best year of her three-decade career as a concert promoter. Now, at age 52, she wonders if that career is over. She is relying on unemployment benefits and Medicaid and has applied for food stamps. Work has dried up. And she has lost hope that the crisis will end soon. (Sofia Valiente via AP)

WASHINGTON — This spring, Magdalena Valiente was expecting her best year as a Florida-based concert promoter. Now, she wonders if the career she built over three decades is over.

Back in March, Valiente had been planning five tours for Latin Grammy winners Fonseca and Andrés Cepeda and more than 20 for Miami Latin pop band Bacilos. Earning well into six figures during good years, Valiente was hoping to help her youngest son, a high school junior, pay his way through college.

But with live events canceled, things have turned bleak. She is relying on unemployment benefits and Medicaid and has applied for food stamps. She has lost hope that the crisis will end soon.

“I worked up from the very bottom when I started in this business in my twenties,” said Valiente, a single mother in Fort Lauderdale. “There weren’t many other women, and it was hard. It’s not easy to let it go.”

Millions of Americans in the industries hit hardest by the viral pandemic face a similar plight. Their unemployment has stretched from weeks into months, and it’s become painfully unclear when, if ever, their jobs will come back. In the entertainment field where Valiente worked and in other sectors that absorbed heavy job losses — from restaurants and hotels to energy, higher education and advertising — employment remains far below pre-pandemic levels.

These trends have raised the specter of a period of widespread long-term unemployment that could turn the viral recession into a more painful, extended downturn. People who have been jobless for six months or longer — one definition of long-term unemployment — typically suffer an erosion of skills and professional networks that makes it harder to find a new job. Many will need training or education to find work with a new company or in a new occupation, which can delay their re-entry into the job market.

On Friday, the government reported that employers added 661,000 jobs in September, normally a healthy gain. Yet it marked the third straight monthly slowdown in hiring. The nation has regained barely half the 22 million jobs that were lost to the pandemic and the widespread business shutdowns it caused in March and April.

In a worrisome trend, a rising proportion of job losses appear to be permanently gone. When the virus erupted in March and paralyzed the economy, nearly 90 percent of layoffs were considered temporary, and a quick rebound seemed possible. No longer. In September, the number of Americans classified as permanently laid off rose 12 percent to 3.8 million. And the number of long-term unemployed rose by 781,000 — the largest increase on record — to 2.4 million.

“We have a real chance of there being massive long-term unemployment,” said Till Von Wachter, an economics professor at UCLA.

The nation now has 7 percent fewer jobs than in February. Yet the damage is far deeper in some sectors. The performing arts and spectator sports category, which includes Valiente’s industry, has lost 47 percent of its jobs. It hasn’t added any net jobs since the coronavirus struck.

Hotels are down 35 percent, restaurants and bars 19 percent, transportation 18 percent. Advertising, one of the first expenses that companies cut in a downturn, is down 9 percent.

Higher education has lost 9 percent of its jobs. Many classes have been delayed or moved online, reducing the need for janitors, cafeteria workers and other administrators. Normally during recessions, the education sector adds jobs to accommodate people returning to school to seek marketable skills or education. Not this time.

Ashley Broshious took years to develop skills that now seem much less in demand. A manager and sommelier at a Charleston restaurant, Broshious is one of just six certified advanced sommeliers in South Carolina. Still, she was laid off in March. And when the restaurant owner reopened one of his two establishments, she wasn’t rehired.

Now, Broshious receives about $326 a week in unemployment benefits. That’s not nearly enough to pay the $2,400 monthly rent on her home, as well as student loans, car insurance and credit card debt from a trip to Hawaii she took while still working.

“When you spend your entire life building this career,” Broshious said, “it’s hard to start over.”

Some economists note hopefully that this recovery has progressed faster than many analysts expected and may keep doing so. Matthew Notowidigdo, an economist at the University of Chicago’s Booth School, and three colleagues predicted in a research paper that the rapid recall of temporary workers will lower unemployment to 4.6 percent a year from now. That would suggest a much faster recovery than the previous recession.

Three-quarters of the temporarily laid off aren’t bothering to look for work, Notowidigdo said, based on an analysis of government data, apparently because they’re confident of being recalled. And while the number of job openings has declined by about 17 percent compared with a year earlier, according to Glassdoor, it remains far higher than during the Great Recession.

In July, the most recent month for which government data is available, there were 2.5 unemployed workers, on average, for each job opening. That’s much better than the six unemployed per job opening during the depths of the Great Recession.

“There are still a lot of people finding jobs fairly rapidly,” Notowidigdo said.

Still, more than one-third of workers who have been laid off or furloughed now regard their job loss as permanent, according to a survey by Morning Consult. That’s up from just 15 percent in April.

Some economists, like Sophia Koropeckyj of Moody’s Analytics, see rising cause for concern. Koropeckyj estimates that 5 million people will struggle to find work even after the virus has been controlled. Jobs likely won’t return to pre-pandemic levels until late in 2023, she said in a research note.

Even among some people who have managed to land new jobs, the pandemic recession has upended their financial lives.

Angela Grimley worked her way up through several Marriott Hotels in Philadelphia to become an event manager, only to have the recession kick her back down the ladder. After months of unemployment, Grimley, 38, found a part-time job answering customers’ calls and emails for the Pennsylvania General Store, which sells food and souvenirs found only in Pennsylvania.

She loves the work. And she feels fortunate that her boyfriend, whom she lives with, is still working. But before the pandemic Grimley had received a new job offer as a conference and event manager at a marketing company involved in healthy parenting products. The job would have paid much more and provided health and retirement benefits, which her part-time job doesn’t. But the offer vanished in the pandemic.

The damage to her finances “keeps me up at night,” Grimley said. Having had to buy health insurance through the Affordable Care Act, she’s discovered that some of her doctors won’t accept her new insurance.

For Valiente, no concerts are scheduled until August 2021. Yet she’s no longer confident that the public will be ready even then for packed concerts of thousands of people.

At 52, she said, it’s hard to contemplate a career change.

“By the end of the year, if things look worse, I’ll have to come up with a plan B, but I don’t know what that will be in the music business,” Valiente said. “I don’t want to go into debt because I’m not young, and I don’t have another 30 years of working.”