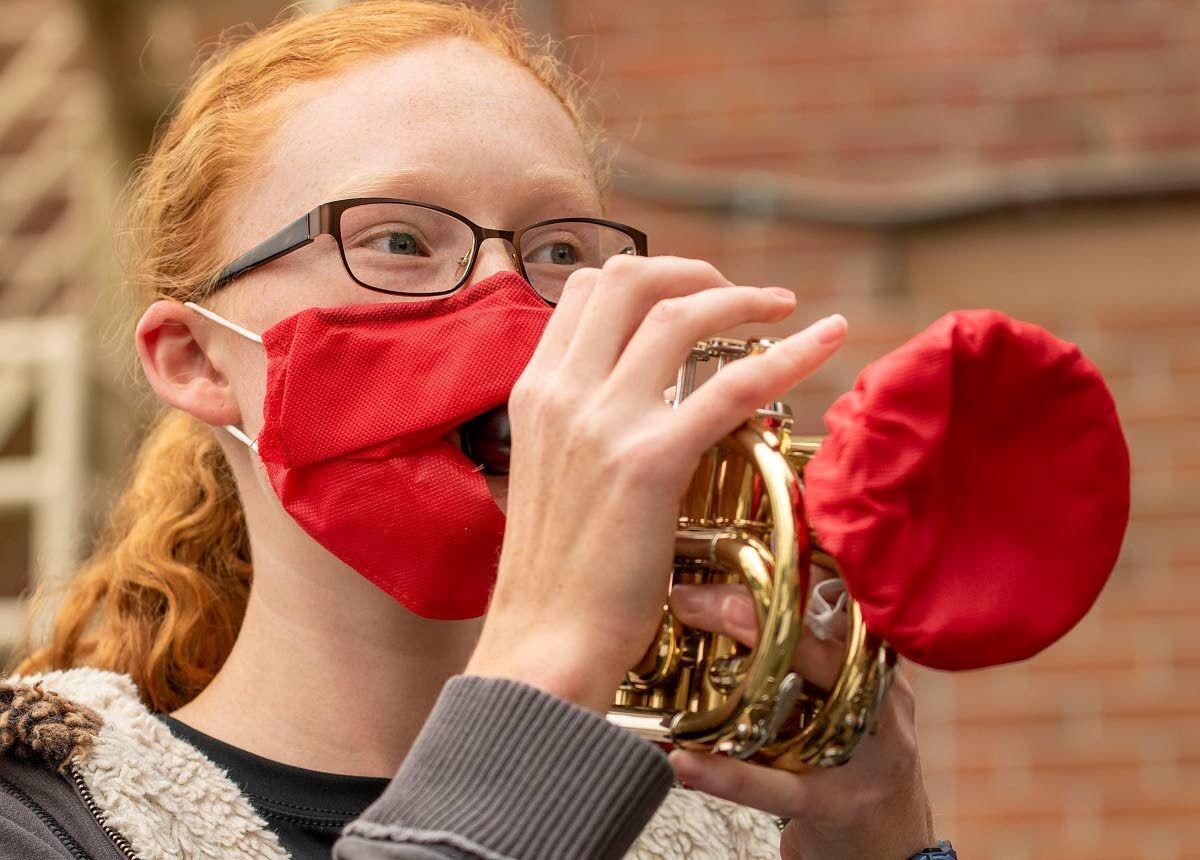 Moscow High School student Hannah Marcoe plays a pocket trumpet using a bell mask and a split face mask Friday outside the high school in Moscow. The masks were made by Alice Hanks Allen, who is the mother of the school’s band and orchestra teacher, Leah Dahl. 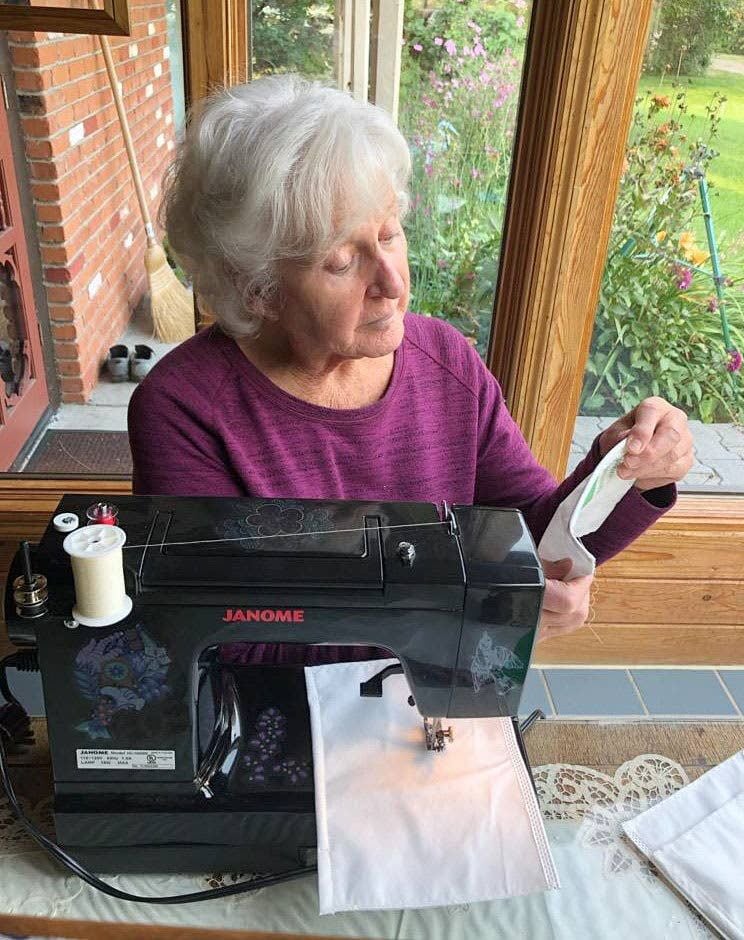 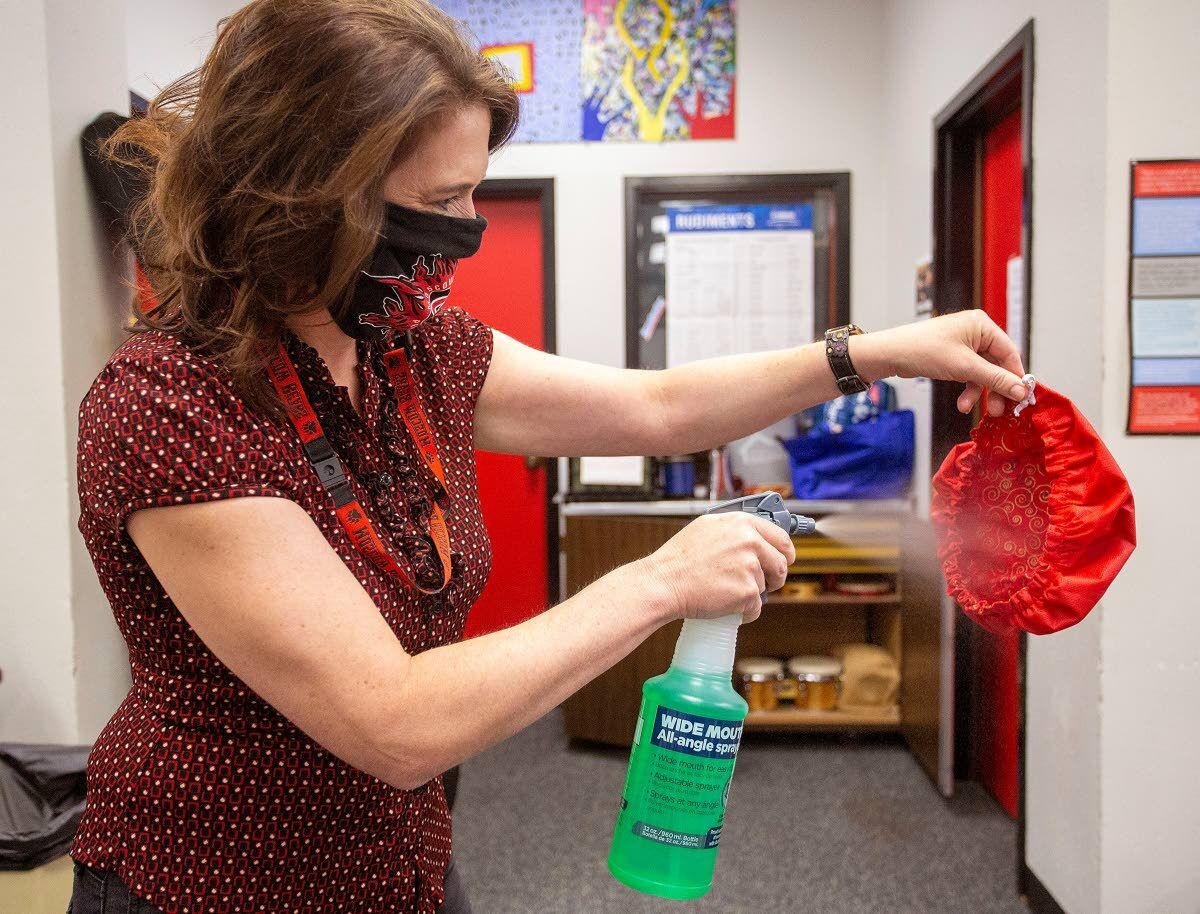 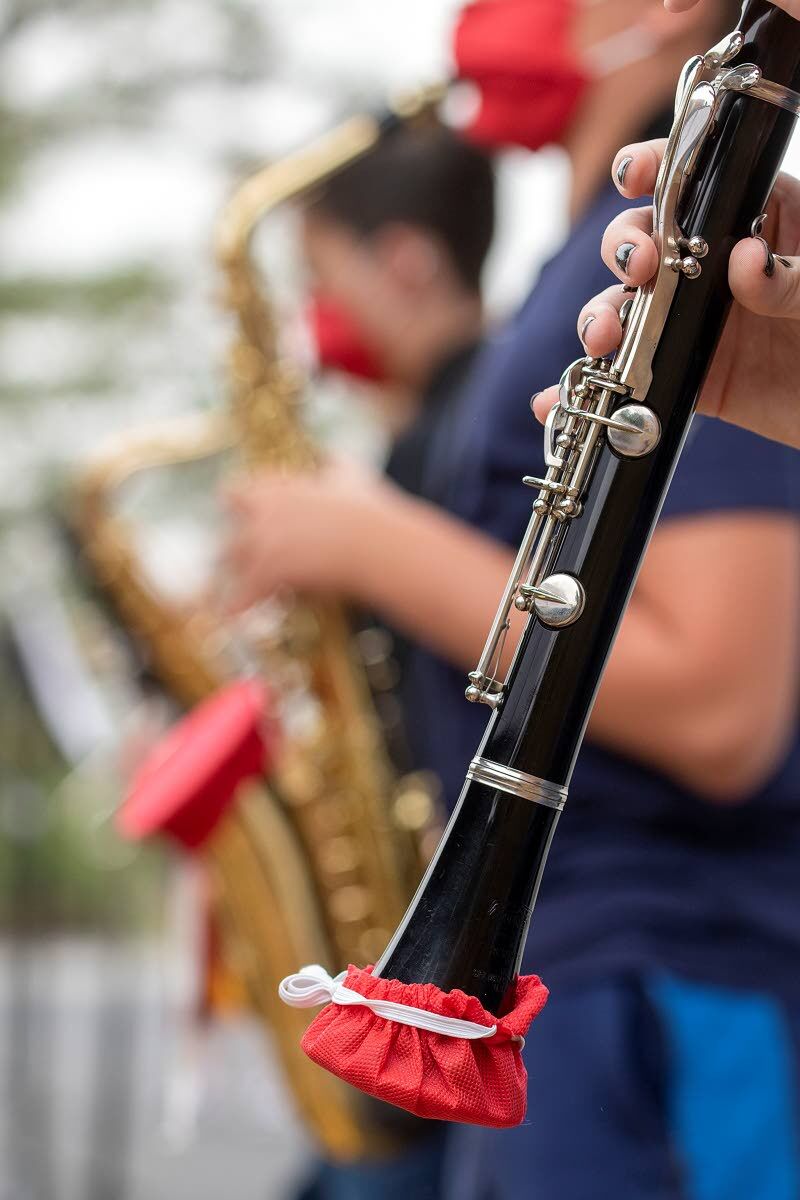 Moscow High School student Hannah Marcoe plays a pocket trumpet using a bell mask and a split face mask Friday outside the high school in Moscow. The masks were made by Alice Hanks Allen, who is the mother of the school’s band and orchestra teacher, Leah Dahl.

The coronavirus pandemic has cast uncertainty over music programs across the country, but with the support of her mother, Moscow High School music teacher Leah Dahl says her program is now up and running and bigger than ever.

Dahl’s mother, Alice Hanks Allen, took it upon herself to sew together “slit” masks that include a small, horizontal hole beneath overlapping pleats. A student can lift the top layer out of the way and slip through a mouthpiece, which allows them to play brass and woodwind instruments.

“It’s just incredible that one woman did all of this,” Dahl said. “I have masks for sousaphones, for tubas, for trumpets (and more).”

Dahl said her mother is not only sewing special face masks but she’s also made polypropylene bell covers that stretch across the opening on the end of brass and woodwind instruments to help halt aerosolized particles from players’ mouths escaping into the air.

Since beginning the project, Dahl said word has gotten out on social media, and Hanks Allen has now received orders from Potlatch and Orofino school districts, as well as a school in Virginia.

“It’s a little counterintuitive to have a hole in a mask, but it’s the best we can do and it helps,” Dahl said. “I don’t want anyone to think that we’re being cavalier or removing all risks, because we very much aren’t — we still will only play outside or in the auditorium.”

Dahl said she and her students are considering doing small chamber or ensemble performances as well as staging virtual concerts in lieu of their usual larger performances, in the interest of health and safety.

Hanks Allen, 75, said music has always been an important part of her life. Her mother was a graduate of the New England Conservatory of Music and later earned teaching degrees in music and English. She plays a number of instruments herself and used to sing opera.

Today, she plays fiddle and sometimes bass for a bluegrass band near her home in Bozeman, Mont. Hanks Allen said she made sure her three daughters received the benefit of music training as well. All three of her daughters still play music to this day, she said.

Hanks Allen said music education provides a host of benefits to students, especially at an early age. She said this is first and foremost about young people “enriching their lives” with music.

She said she did want to support her daughter in a time of crisis, but the most important aspect of this project was to support the students. Music classes “shouldn’t be an elective,” she said.

Dahl said the support of her mother meant a great deal to her, especially in a time where the future of her career as a music educator seemed uncertain.

“I get a little emotional — not only is this my field and it’s my job, but it’s my heart,” Dahl said. “To have everything shut down so abruptly in March and have the future of my career in doubt and the students and families unsure about what’s going to happen — this just hits all the feels.”