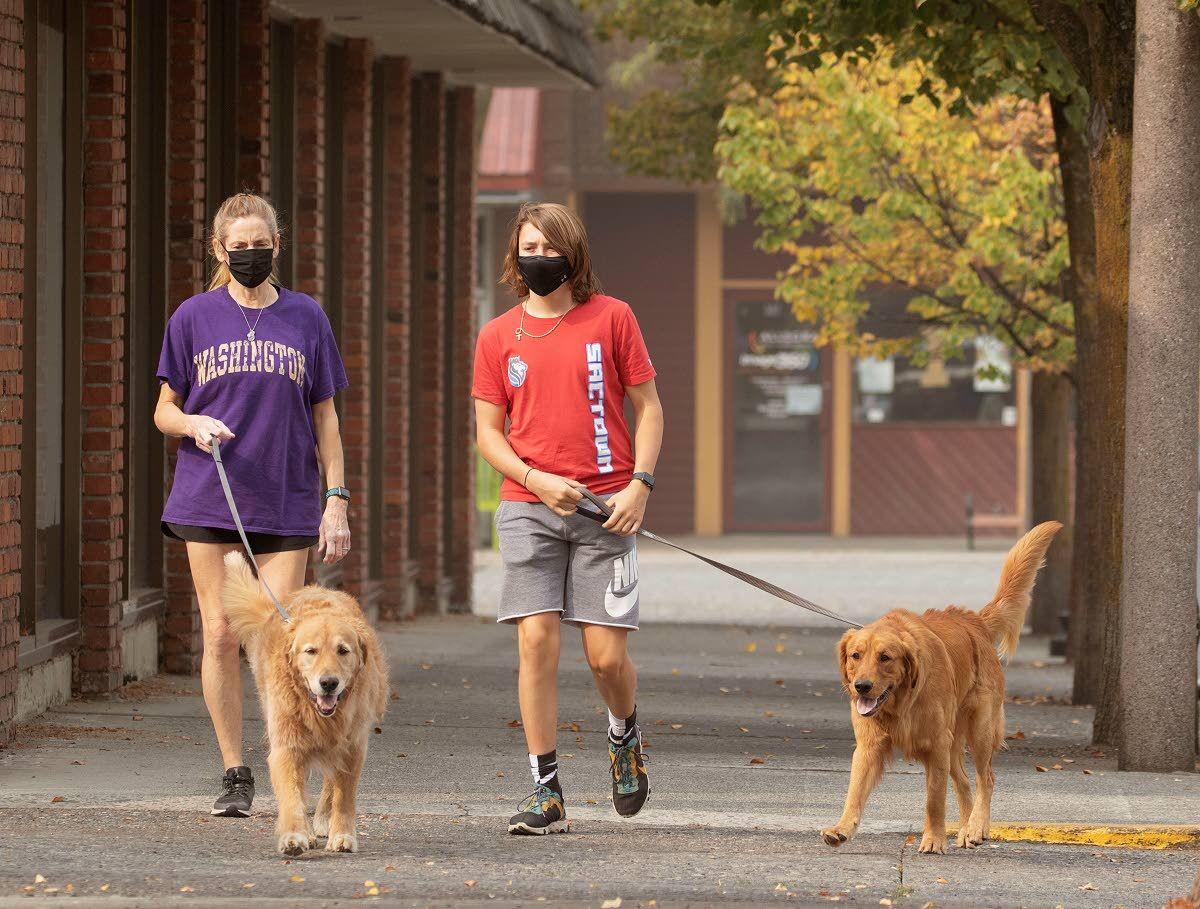 Stacey Thornycroft and her son, Wyatt Thornycroft, walk their dogs on Fifth Street on Friday in downtown Moscow. At a meeting tonight, the Moscow City Council will consider extending the face mask resolution until Jan. 5. 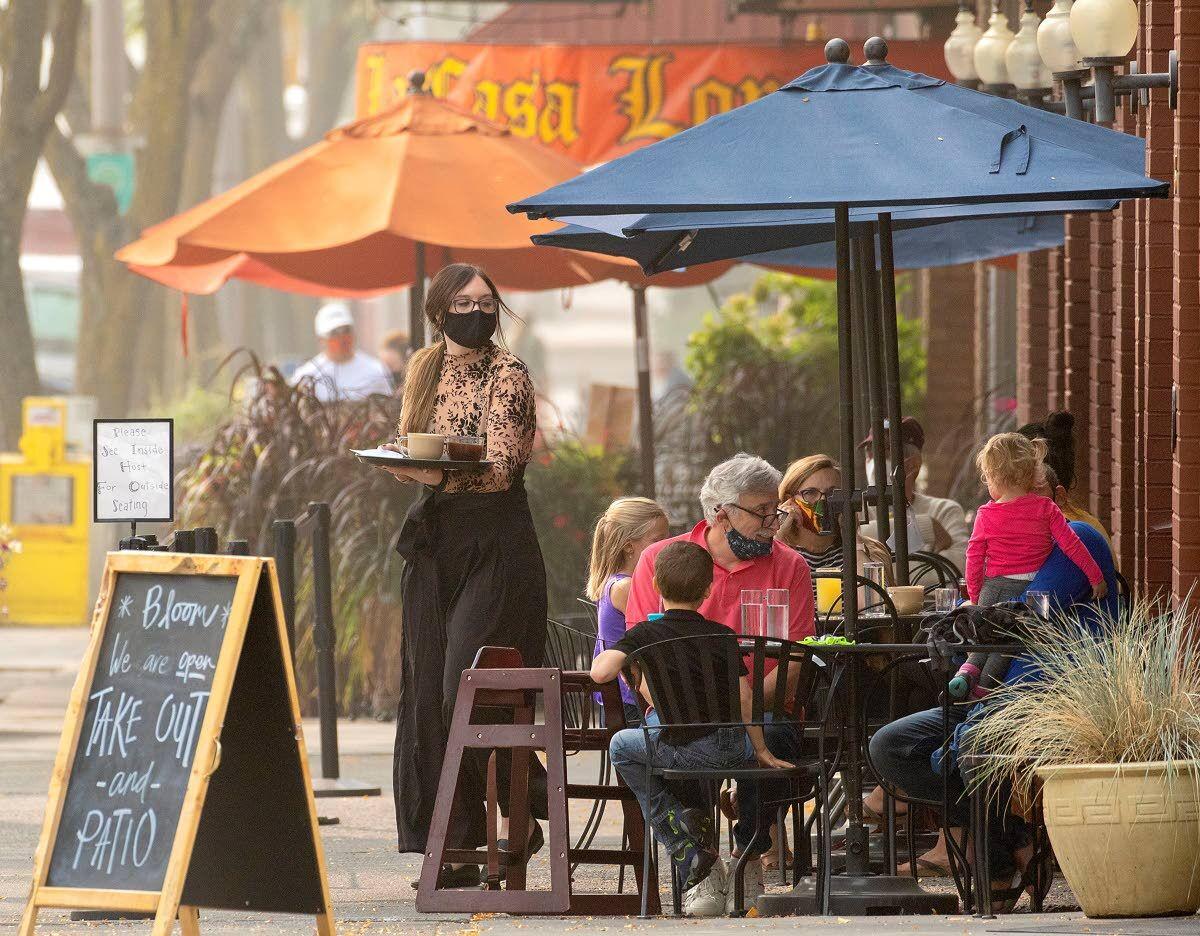 A server wears a face mask while helping customers at Bloom on Friday in Moscow. At a meeting tonight, the Moscow City Council will consider extending the face mask resolution until Jan. 5.

Stacey Thornycroft and her son, Wyatt Thornycroft, walk their dogs on Fifth Street on Friday in downtown Moscow. At a meeting tonight, the Moscow City Council will consider extending the face mask resolution until Jan. 5.

A server wears a face mask while helping customers at Bloom on Friday in Moscow. At a meeting tonight, the Moscow City Council will consider extending the face mask resolution until Jan. 5.

Moscow’s face mask order has been in effect since early July and the Moscow City Council will consider extending it to Jan. 5 at today’s regular council meeting.

Three councilors, or half the city council, said Friday they support extending the order to help prevent the spread of COVID-19.

The order, which expires Oct. 6, states that face coverings must be worn in public settings where 6-foot social distancing cannot be maintained with nonhousehold members.

Mayor Bill Lambert issued the public health emergency order at the end of June and the council extended it July 6, and then again Aug. 3.

“I think that unless there is amazingly compelling data that says masks are not important, I don’t see any reason to change the mandate and I would support extending it,” Councilor Gina Taruscio said.

She said she will carry that opinion into today’s meeting, which starts at 7 p.m. at city hall, and will then put her personal thoughts aside, gather input and vote accordingly.

Councilor Sandra Kelly said the order needs to be extended. She called the number of cases in Whitman County “astronomical.”

“That makes a huge difference in how I look at things and how I want to keep our community safe,” Kelly said of the amount of cases in both counties.

She said a great deal of people drive back and forth between Moscow and Pullman frequently for work and play.

“I have talked to many folks who, as much as they are tired of wearing masks, are thankful that the mandate’s in place because it allows them to go out and carry on business as usual,” Kelly said.

She said wearing a mask is one of the few ways to combat the virus.

“While I’m thankful no one has died and I hope we can keep it that way, (extending the order) is one way to protect that, and so I truly feel that extending this a little longer is the best thing we can do for our community,” Kelly said.

She said she is comfortable with the Jan. 5 date because the council can terminate the order before that date if needed.

Councilor Anne Zabala said she supports extending the order but she encourages the public to contact the council prior to the meeting with their opinions on the proposed extension and she will consider that input and health updates before making a decision.

Zabala said public input makes a difference and that residents opposed to the order have generated great conversation, such as the role of government and what criteria the council uses to make these decisions.

“Beyond the information we’ve received from the (Centers for Disease Control and Prevention) and our local public health districts, my support was solidified the first time we made the decision (on the order) based on the diversity of backgrounds and perspectives that voiced their support and just the sheer number of emails we received,” Zabala said. “It was more than I had received in my first two years of office.”

Because of the order, she said the council has heard from business owners who said they have an easier time asking customers to wear a mask, people are shopping locally again, people are traveling into Moscow to shop and many seniors feel safer making essential trips, such as for groceries.

The council will also consider Monday extending a resolution, which expires Oct. 4, that allows downtown businesses to expand into Main Street rights-of-way, like sidewalks and on-street parking stalls.

The city clerk has issued 16 temporary expansion permits, according to a city news release. Two businesses asked for the removal of their expansion because 10-minute pickup spaces located in front of their businesses were determined to be more valuable to them than extra seating.

The council approved the temporary expansion June 1 so establishments can entertain more patrons during the coronavirus pandemic while maintaining social distancing.

City staff’s draft resolution extends the resolution to Dec. 1, but it can be terminated earlier by City Supervisor Gary Riedner — after consultation with city staff charged with maintaining the public rights-of-way — as a result of safety concerns related to winter weather.

The release said Lambert and the city council are requesting input from the community via email at council@ci.moscow.id.us on the proposed face mask resolution extension and proposed extension of the temporary expansion into public rights-of-way.

The release said the mayor has the authority to issue public health emergency orders by virtue of the Constitution, state laws, city code and the common-law authority to protect the public in the event of an emergency.