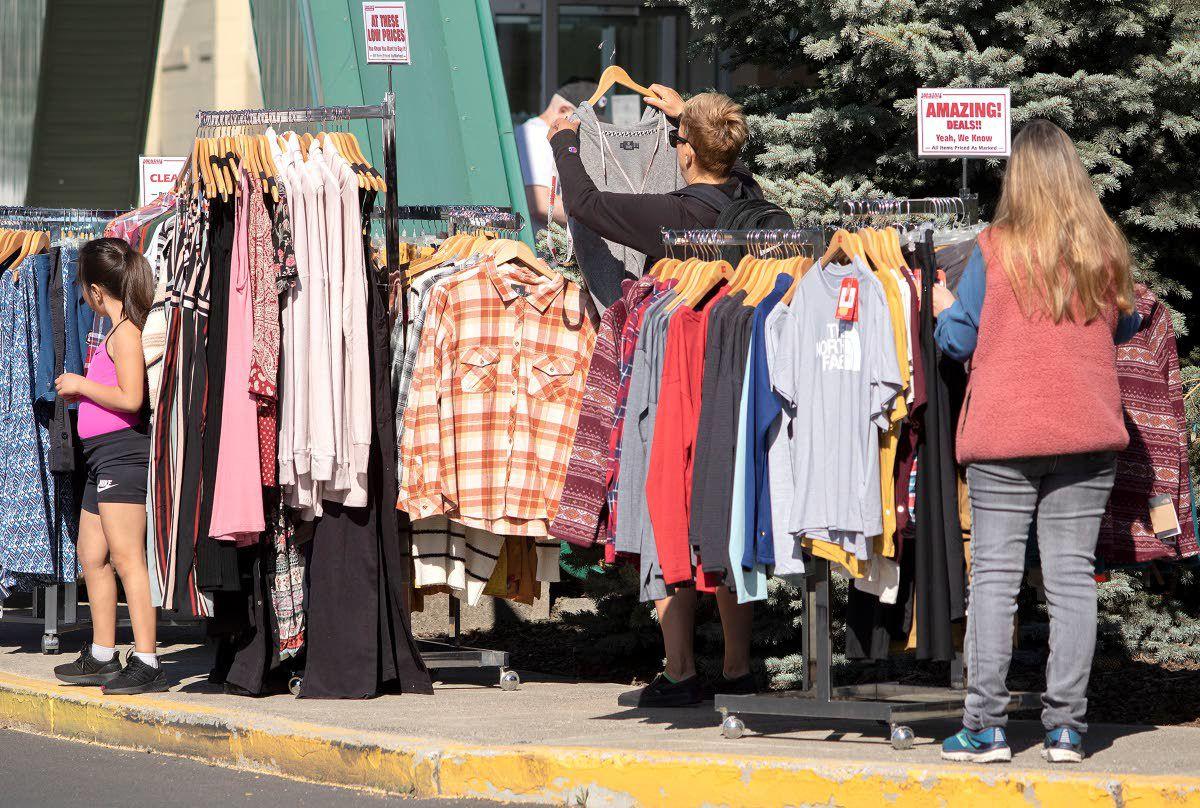 Shoppers browse at clothing on sale outside Tri-State Outfitters on Friday in Moscow. The business re-opened on Friday after Gov. Brad Little lifted a stay-at-home order on Thursday. 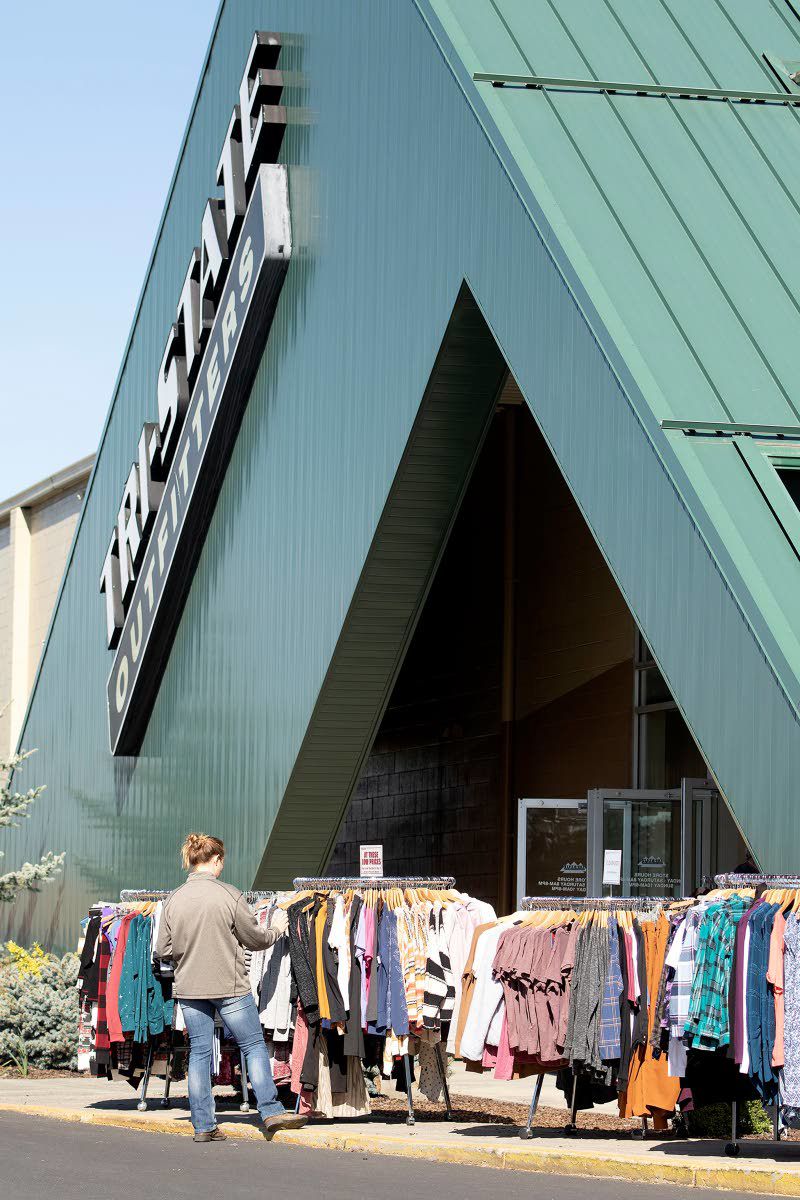 A shopper looks over some of the clothing on sale outside Tri-State Outfitters on Friday in Moscow. The business re-opened on Friday after Gov. Brad Little lifted a stay-at-home order on Thursday. 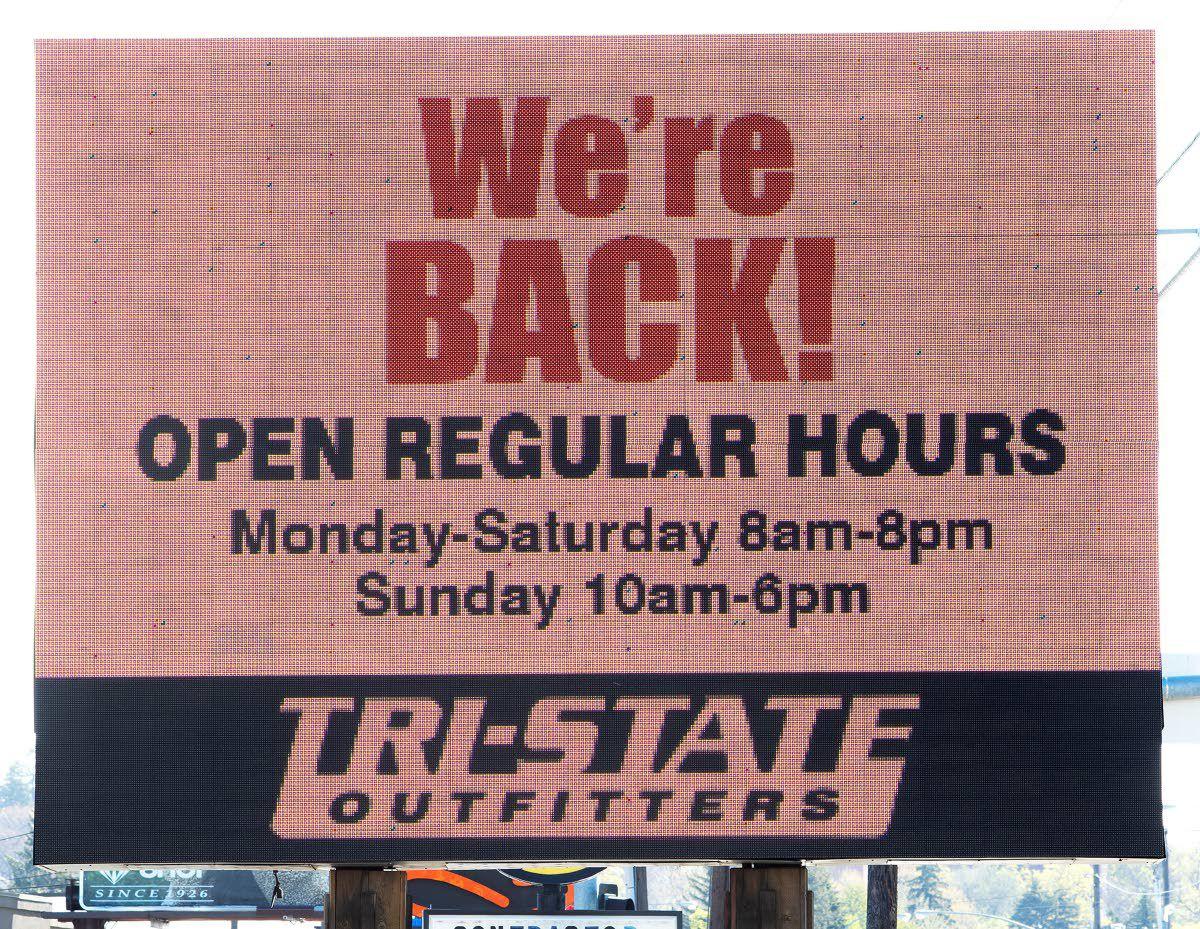 A sign outside Tri-State Outfitters announces that the business is now open regular hours on Friday in Moscow. The business re-opened on Friday after Gov. Brad Little lifted a stay-at-home order on Thursday.

Shoppers browse at clothing on sale outside Tri-State Outfitters on Friday in Moscow. The business re-opened on Friday after Gov. Brad Little lifted a stay-at-home order on Thursday.

A shopper looks over some of the clothing on sale outside Tri-State Outfitters on Friday in Moscow. The business re-opened on Friday after Gov. Brad Little lifted a stay-at-home order on Thursday.

A sign outside Tri-State Outfitters announces that the business is now open regular hours on Friday in Moscow. The business re-opened on Friday after Gov. Brad Little lifted a stay-at-home order on Thursday.

In normal times, thousands of people would have flooded downtown Moscow Saturday to celebrate the first Moscow Farmers Market of the season.

These are not normal times.

Because of the COVID-19 pandemic, the city pushed back the first farmers market to June 6, which resulted in a relatively quiet Saturday morning in Moscow.

Still, for many business owners, simply having an open front door was reason enough for celebration.

Idaho Republican Gov. Brad Little allowed the statewide stay-at-home order to expire Thursday, meaning most Idaho businesses were able to reopen their doors this weekend for the first time in more than a month.

T. Jay Clevenger, owner of Paradise Creek Bicycles in downtown Moscow, reopened the doors of his store on Saturday.

During the shutdown, his business was open only by appointment.

“It’s been really hard,” Clevenger said. He said he is limiting 10 people in his store, black tape markings are placed every six feet to distance customers and surfaces are being wiped down — evidenced by at least one cleaning spray bottle in sight Saturday.

“I’m anxious to open up the doors and get business going at full speed again,” Clevenger said. He said it felt good to reopen his doors but that things are not close to normal.

“They’ll never be back to normal … but I feel people are excited about being able to come downtown and shop,” Clevenger said.

Austin Storm, who owns the Storm Cellar downtown with his wife, Laura, said they plan to open their clothing store Tuesday.

He said they were not prepared to open Friday partly because of the short notice provided by the Moscow City Council that certain stores could open.

The council decided Thursday to terminate its coronavirus orders that were set to expire Tuesday.

He said the delayed opening is also a result of Storm and his wife checking to see if their furloughed employees still plan to work at the store, making sure their employees have masks and checking other related details.

“Obviously, our first concern is hospitality and making people feel comfortable,” Austin Storm said. “So we want to make sure that we approach it in the right way so that people know that we care about them …. The sooner we can return to some kind of open state, the better off we’ll be.”

He said the last several weeks have been filled with several emotions, including uncertainty.“We’ve been doing this for 10 years so it’s wild to think that something you do for 10 years could be threatened,” Austin Storm said.

While their doors are closed, he said they moved to online sales and allowed customers to pick up items at the store.

“It’s been a time of really intense gratitude because even though our sales are down 90 percent, we’re like super, super grateful for the 10 percent that’s still there,” he said.

He said it has been a wild time and every small business owner he has spoken with has been financially harmed.

Austin Storm said their store is going the “extra mile” to make customers feel safe when shopping. He said clothes that people try on will be kept off the sale floor for 24 hours before being reshelved — a move the Macy’s store chain implemented, he said.

In addition, he said floor tape will serve to keep people appropriately distanced, surfaces and door handles will be cleaned and they still need to determine the maximum number of people that can be in the store at once while maintaining six-foot social distancing.

Zachary Dapron, a 24-year-old Moscow resident who bought hardware at the store, said he did not have much apprehension shopping with others because he was only inside the store, which reopened Friday, for a few minutes and most customers kept their distance from one another.

He said he works as a delivery driver and is accustomed to interacting with people during the shutdown — another reason for being unnerved.

Dapron said he would be a bit more nervous shopping at smaller-sized stores where customers could potentially be closer together.

“If it’s really busy in there, I’m like, I’ll go to the next store because I still want to social distance,” he said.

Kim Johnson, who owns Johnson’s Jewelry at the Palouse Mall and Moscow’s Anytime Fitness with her husband, Tony, said it felt amazing to reopen their jewelry store. It had been closed since late March.

“We were so excited and we have been slammed busy,” Kim Johnson said.

But after closing and reopening, the store will close again for good May 31 after 41 years of business, Kim Johnson said. She said the closure will be bittersweet and will allow herself and her husband to focus on running Anytime Fitness.

To keep customers and employees safe and comfortable at Johnson’s Jewelry, she said hand sanitizer is available, tape is on the floor marking six foot distances, employees do not handle customers’ credit cards — unless requested — when making purchases, surfaces and jewelry are thoroughly cleaned after customers try items on and the store is encouraging facemasks.

Since it is a jewelry store, Kim Johnson said those who wear a mask are asked to briefly remove it as they walk in the store so employees can see their face and then they can put it back on.

Garrett Cabeza can be reached at gcabeza@dnews.com.