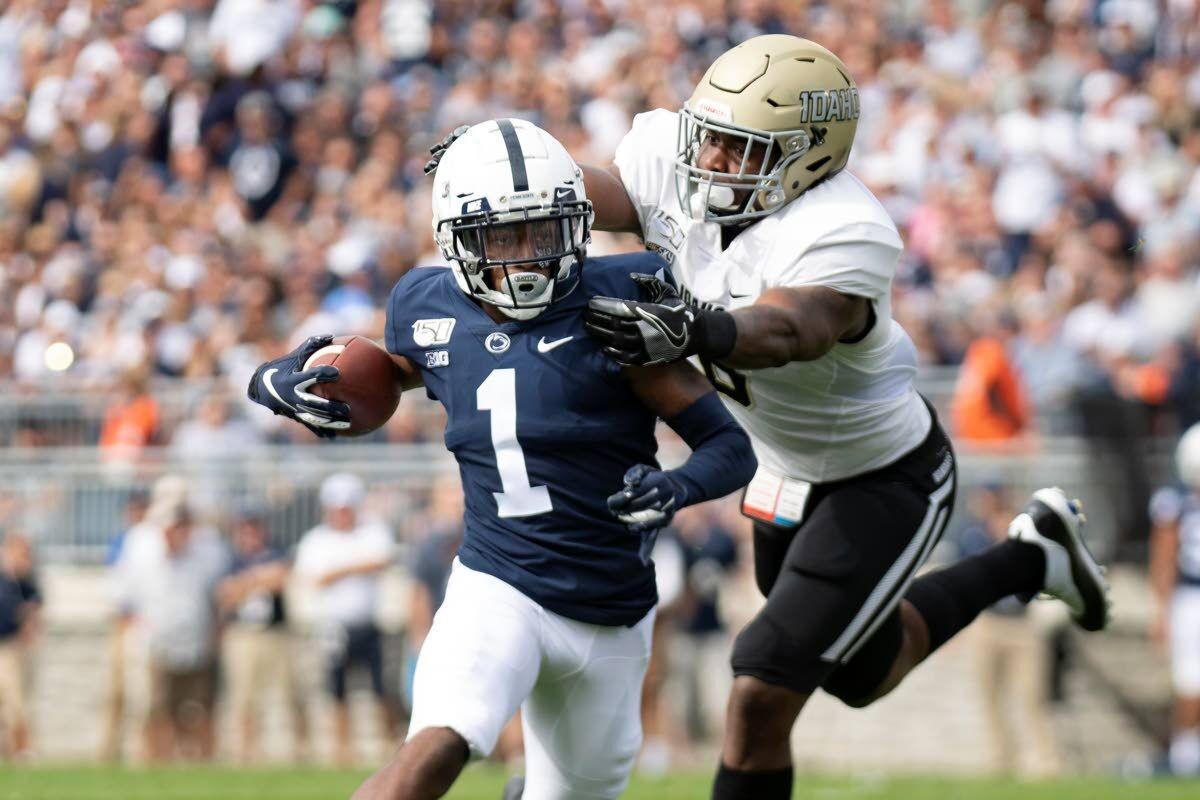 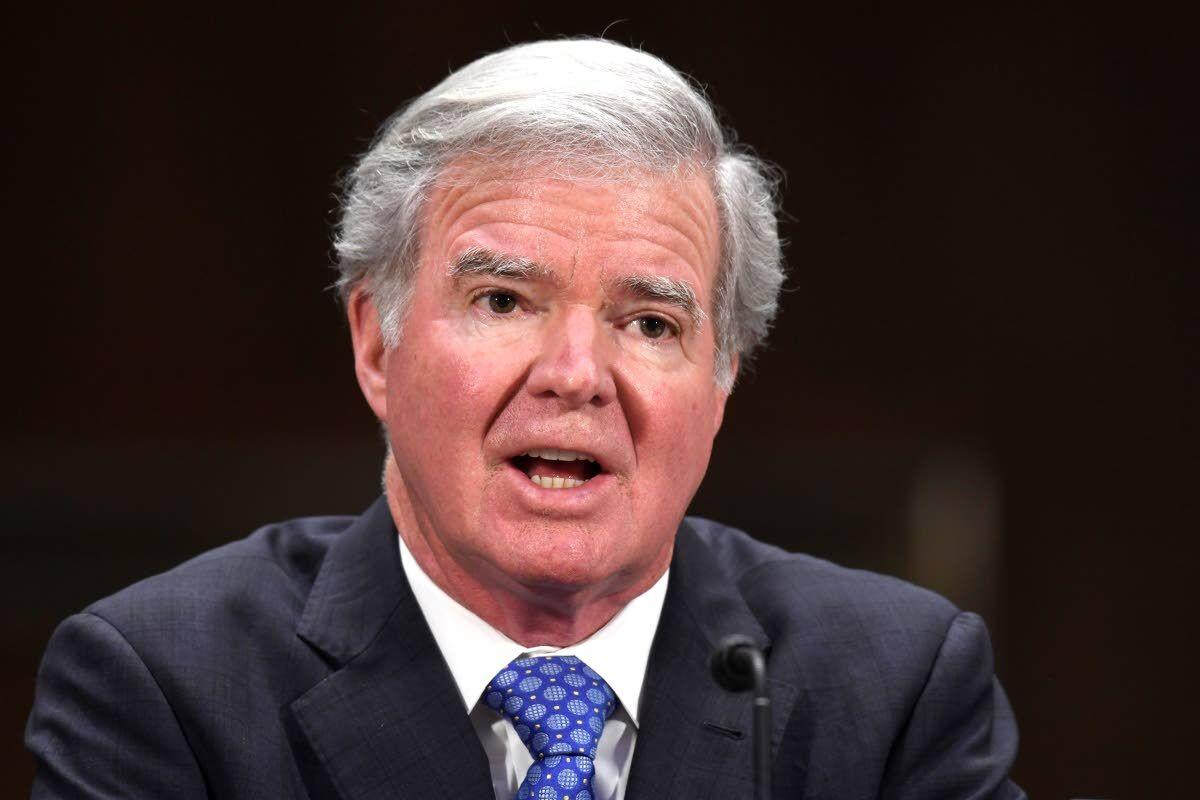 FILE - In this Feb. 11, 2020, file photo, NCAA President Mark Emmert testifies during a Senate Commerce subcommittee hearing on intercollegiate athlete compensation on Capitol Hill in Washington. The Power Five conferences spent $350,000 on lobbying in the first three months of 2020, more than they had previously spent in any full year, as part of a coordinated effort to influence Congress on legislation affecting the ability of college athletes to earn endorsement money. At the hearing in February, NCAA President Mark Emmert said Congress needs to put “guardrails” on athletes' ability to earn money, in part to protect against potential recruiting abuses and endorsement money being used as a pay-for-play scheme. (AP Photo/Susan Walsh)

FILE - In this Feb. 11, 2020, file photo, NCAA President Mark Emmert testifies during a Senate Commerce subcommittee hearing on intercollegiate athlete compensation on Capitol Hill in Washington. The Power Five conferences spent $350,000 on lobbying in the first three months of 2020, more than they had previously spent in any full year, as part of a coordinated effort to influence Congress on legislation affecting the ability of college athletes to earn endorsement money. At the hearing in February, NCAA President Mark Emmert said Congress needs to put “guardrails” on athletes' ability to earn money, in part to protect against potential recruiting abuses and endorsement money being used as a pay-for-play scheme. (AP Photo/Susan Walsh)

Once more, the can has been kicked down the road.

A day after coming up empty on fall sports championship decisions during a long meeting, the NCAA Board of Governors again punted on making a determination regarding fall postseason tournaments, including the Football Championship Subdivision playoffs.

On Wednesday morning, the board directed schools and conferences to follow “specific requirements” in order to conduct fall sports, and announced that, to move forward with fall championships, each NCAA division must assess its ability to meet a lengthy list of protocols.

The FCS, where the University of Idaho plays, will now be tasked to decide the fate of a fall postseason.

“Each division must examine whether it has the resources available to take the required precautions given the spread of COVID-19,” said Michael V. Drake, the board chairman and president of the University of California system, quoted in the NCAA’s news release.

Because the NCAA doesn’t control regular seasons, schools can proceed as normally with their schedules, regardless of the fall postseason’s existence. However, the cancellation of championships would most likely prompt programs to call off their seasons, or potentially push them to the spring.

The governing body set Aug. 21 as a deadline for individual sports — across all three of NCAA’s levels — to conclude whether it’s safe to conduct a regular season and postseason amid the coronavirus pandemic.

The FCS, the lower-half of football-competing Division I schools, can only move forward with a playoff if at least 50 percent of eligible programs play this fall.

The board indicated the 24-team competition may be reduced in size, as well as other fall championships. Hosting postseason competitions at predetermined sites — or single sites — is in the cards as well.

A report from HERO Sports estimated that only 60 percent of eligible FCS teams remain a go for a fall season out of 127 members.

A 40-member Division I council, comprised mostly of school athletic directors, will determine if 22 sports will have fall championships.

According to STATS FCS, the decision to play at all will come from school presidents and CEO groups. The Big Sky Conference is set to meet today to discuss details.

“First and foremost, we need to make sure we provide a safe environment for college athletes to compete for an opportunity to play in NCAA championships,” NCAA president Mark Emmert said, acknowledging that every division is unique. “A decision based on the realities in each division will provide clarity for conferences and campuses as they determine how to safely begin the academic year and the return to sports.”

Per multiple reports, seven of the 13 FCS conferences — and a number of independent programs — have kept hopes for a fall season afloat. The Big Sky is one of them. Idaho’s football team has carried out noncontact drills during the past month, and remains set to open its fall camp Friday.

UI confirmed Monday that nine student-athletes have tested positive for coronavirus over the past month and self-isolated. Since early July, fifteen others had been in contact with the players who tested positive and quarantined themselves. According to sources close to the program, two staffers have also contracted the disease.

The Ivy League, MEAC, Northeast, Patriot and SWAC each have called off their fall seasons. The Colonial Athletic Association, regarded as a top-three FCS league, will not play a conference schedule, but has allowed its members to compete as independents, if programs see fit. The NCAA has left open the possibility of moving the scheduled 2020 fall championships to the spring.

Listed among the protocols the board laid out are myriad coronavirus safety guidelines.

The NCAA will also establish a phone number and email that allow athletes, parents and others to report alleged failures to adhere to COVID-19 protocols.

Student-athletes must be permitted to opt out of participation because of concerns with the pandemic, without risk of losing scholarships. Member schools must adhere to federal, state and local policies, and cover COVID-19-related medical expenses in conjunction with existing insurance standards.

Each division must determine no later than Aug. 14 the eligibility status for student-athletes who opt out of participating this fall, or who have their seasons canceled, or cut short, because of the coronavirus.

“Our decisions place emphasis where it belongs — on the health and safety of college athletes,” Emmert said. “Student-athletes should never feel pressured into playing their sport if they do not believe it is safe to do so. These policies ensure they can make thoughtful, informed decisions about playing this fall.”

According to a report from Stadium on Tuesday, 73 percent of UI players voted confidentially that they did not feel comfortable moving ahead with a fall season considering the policies in place. Several players and parents of players have disputed the report on social media.

Not long after Wednesday’s announcement, the presidents’ councils at the Division II and Division III levels scrapped their fall championships.

The Football Bowl Subdivision season, otherwise, cannot be ended by an NCAA Board of Governors decision — conferences run the postseason.