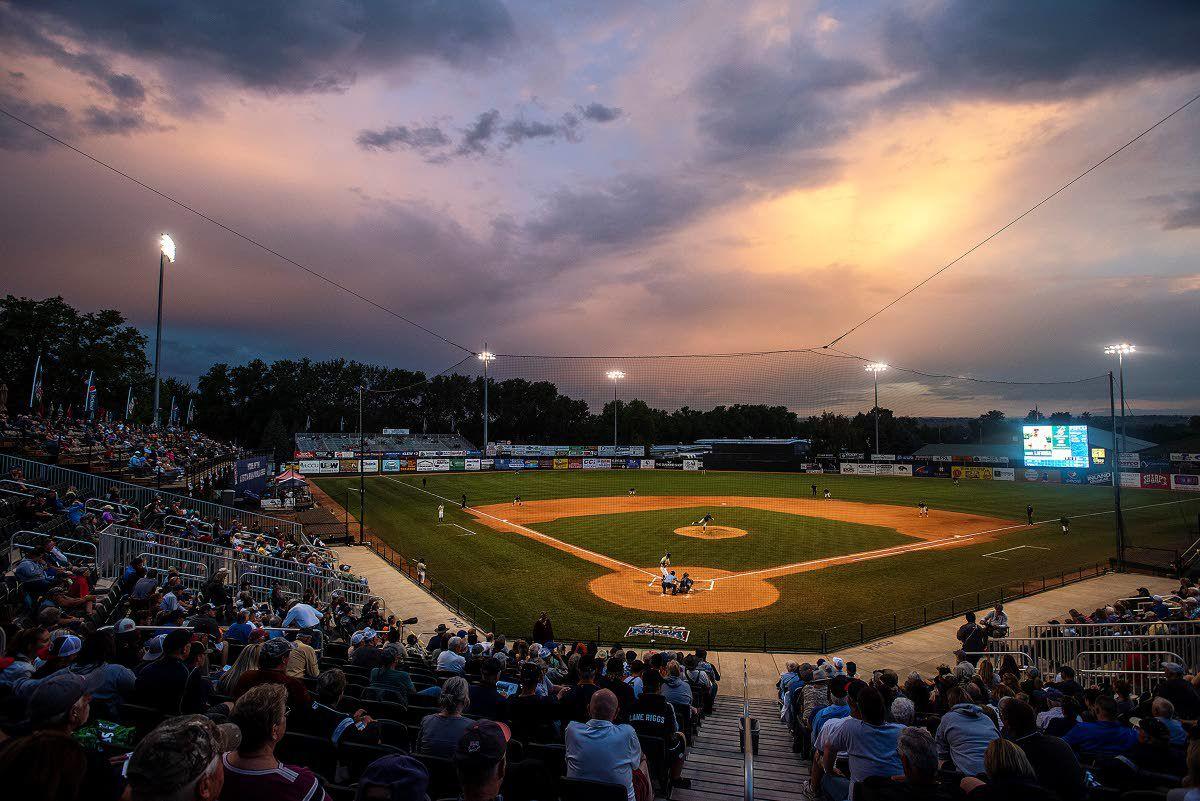 The setting sun paints storm clouds skirting the south end of Harris Field duringgame 18 of the NAIA World Series between St. Thomas and Science & Arts on Thursday at Harris Field in Lewiston. 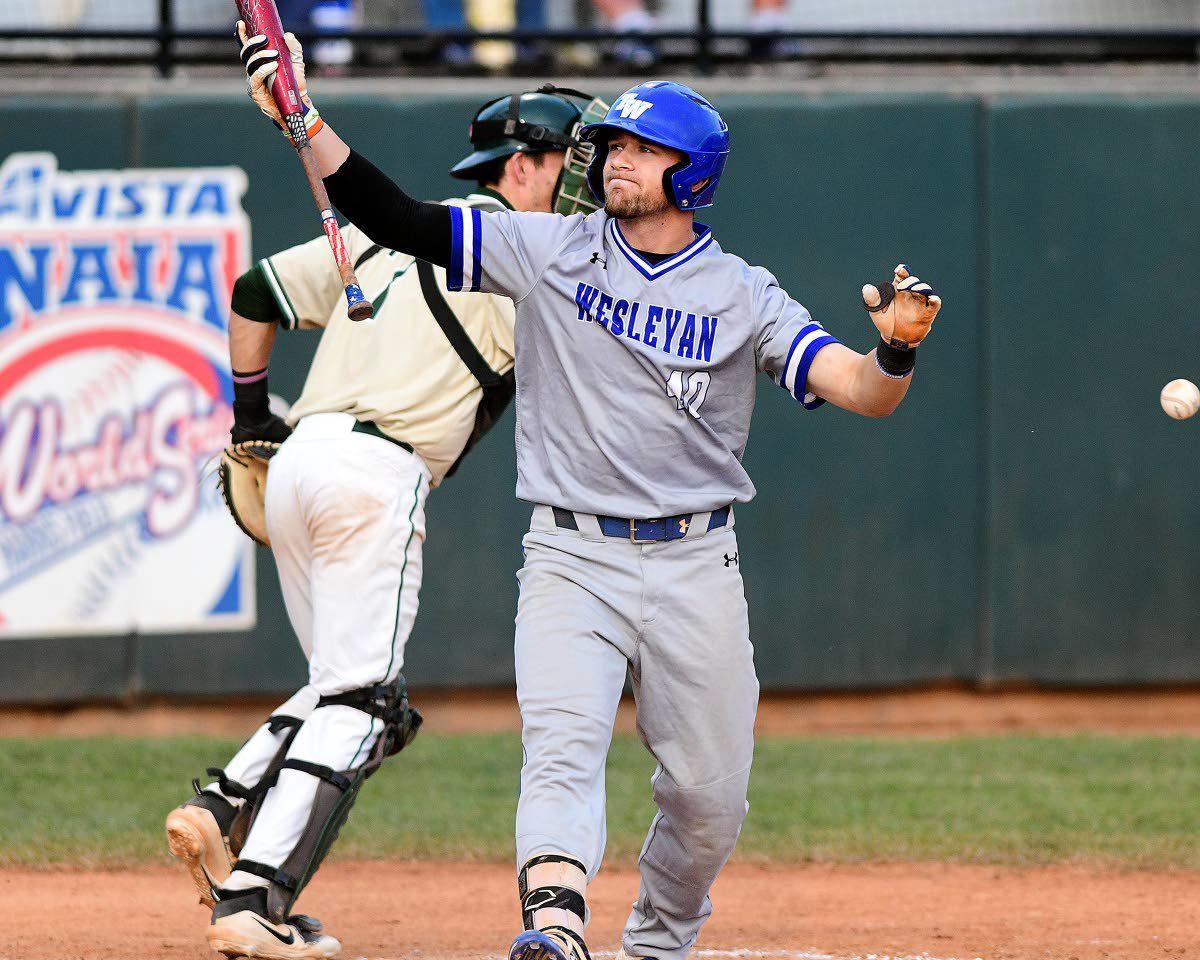 Tennessee Wesleyan's Dan Fry (40) walks back to the dugout frustrated after striking out to end the top of the third inning of game 17 of the NAIA World Series on Wednesday at Harris Field in Lewiston.

The setting sun paints storm clouds skirting the south end of Harris Field duringgame 18 of the NAIA World Series between St. Thomas and Science & Arts on Thursday at Harris Field in Lewiston.

Tennessee Wesleyan's Dan Fry (40) walks back to the dugout frustrated after striking out to end the top of the third inning of game 17 of the NAIA World Series on Wednesday at Harris Field in Lewiston.

For the first Memorial Day weekend in 21 years, there will not be a flood of NAIA baseball enthusiasts to the Lewiston-Clarkston Valley.

On Monday morning, the collegiate athletics organization called off all spring sports at competing schools — including Lewis-Clark State College — amid concerns about the spread of the coronavirus. Among the cancellations is the Avista NAIA World Series, which had closed out the association’s baseball season at Harris Field each year since 2000. It was set to begin May 22, and run for a week.

The decision, effective immediately, was made after the NAIA convened early Monday and discussed possibilities “at great length with multiple governance groups,” a news release said. The group elected to follow suit of several other sports leagues and institutions around the world, and cancel spring seasons to limit the spread of the COVID-19 pandemic.

The Series has been staged annually since 1957. Its first run in Lewiston came between 1984-91. The event then switched sites before returning in 2000, and every May for the past two decades, it has provided a considerable boost for the school, and the valley’s economy.

It means host team Lewis-Clark State, which has won the tournament a record 19 times, won’t have a shot at 20, and that the school’s administration has some figuring out to do in the near future.

“We rely heavily on sponsorships and ticket sales; the Series has a direct impact on LCSC athletics,” said Brooke Henze, the Series director and L-C’s athletic director. “So we’re working on a plan, and probably by early next week we should have an idea of how to move forward with ticket refunds and sponsorships.”

The 10-team competition has more than a $1 million annual impact on the local economy, and draws an influx of players, fans and scouts to the area every year.

Henze said she and other L-C personnel are in the process of working out a figure that accurately captures how much money the community will miss out on without the Series in town, then try to determine how to compensate for the loss of the tournament.

“Everything has happened so quickly, that we’re just trying to make the best decisions with the information given to us,” Henze said.

The NAIA, according to a release from president Jim Carr, made the decision with the health of “student-athletes, staff and fans” in mind. The Center for Disease Control’s recommendation Sunday to limit gatherings to fewer than 50 people for the next eight weeks was a central part of the cancellations — team practices will be put on hold during that time frame.

The NAIA spring seasons became the latest dominoes to fall in an unprecedented six-day period that has seen the NCAA and several major pro leagues scrap competitions for the foreseeable future.

Last weekend, a handful of ranked NAIA baseball teams had their seasons end when several conferences pulled the plug on spring seasons.

“Nobody really wants to cancel, but it’s the best option at this point,” Henze said. “Making sure everyone’s protected is the top priority.”

Student-athletes for LCSC spring sports — which include baseball, track and field, golf and tennis — will be awarded two additional semester terms, allowing seniors to return for another season if they see fit. The Warriors have 27 seniors listed as spring athletes — 11 for baseball, seven for golf, five for tennis and four for track and field.

It’s unclear how the NAIA will handle the issue of scholarship allotments, considering the incoming freshmen who have already been offered.

“Say we’re at our maximum (number of scholarships for a team), and we’re allowing seniors to come back. Are they going to give us flexibility in that number?” Henze said. “We’re waiting on guidance from the NAIA on a lot of future details.

“We’ve got a lot of work to do. If we sign an award letter, we’re gonna honor it.”

As for the winter athletes — who were within a week or two of finishing their seasons — the NAIA said it has not yet made a decision about eligibility.

“We know there are outstanding questions regarding relief for winter sport student-athletes, implications on transfer regulations, and impacts to academic eligibility rules,” the release said. “We are working closely with the appropriate governance groups to determine answers and will continue to share information ... as it becomes available.”

“My heart just breaks for them,” Henze said.

The L-C baseball team, which ends the season 15-5 after having won its last nine games, met after the announcement. Second-year coach Jake Taylor told his seniors to “take the week off, think hard about (returning next year or not), talk to your parents and figure out what’s best ... because another year is a huge commitment.

“There’ll definitely be some guys that wanna come back, and some guys might want to start their careers.”

Taylor and Co., like the whole of the sports world, remain in wait.

“There’s still the questions of: What will happen with classes and graduations, and would (seniors taking an extra year) have to take a new major?” Taylor said. “There’s a lot we don’t know the answer to yet. We’re kinda at the point where it’s a waiting game.”

Taylor noted the uncertainties of recruiting high school athletes — whose senior seasons have also been discontinued — and junior-college players. The National Junior College Athletic Association announced Monday that spring student-athletes would not be charged a year of eligibility. A chunk of Warriors rosters are generally made up of juco talents.

Also up in the air is the fate of LCSC’s professional prospects. The MLB grounded its scouts late last week, and the June MLB draft will likely be affected.

“We talked about that too,” Taylor said. “For the entire country, junior and senior seasons were just getting started, guys were still trying to prove themselves.”

But the cancellation of the L-C Valley’s most important sporting weekend will have the most extensive local impact, even though — considering the circumstances — it wasn’t much of a shock.

“It’s such a special event for the whole community and NAIA baseball, and baseball in itself,” Taylor said. “It’s a big hit to have such a special event taken away. You hope everyone’s safe during this whole thing, hope we can figure it out as a country and get it going again.”