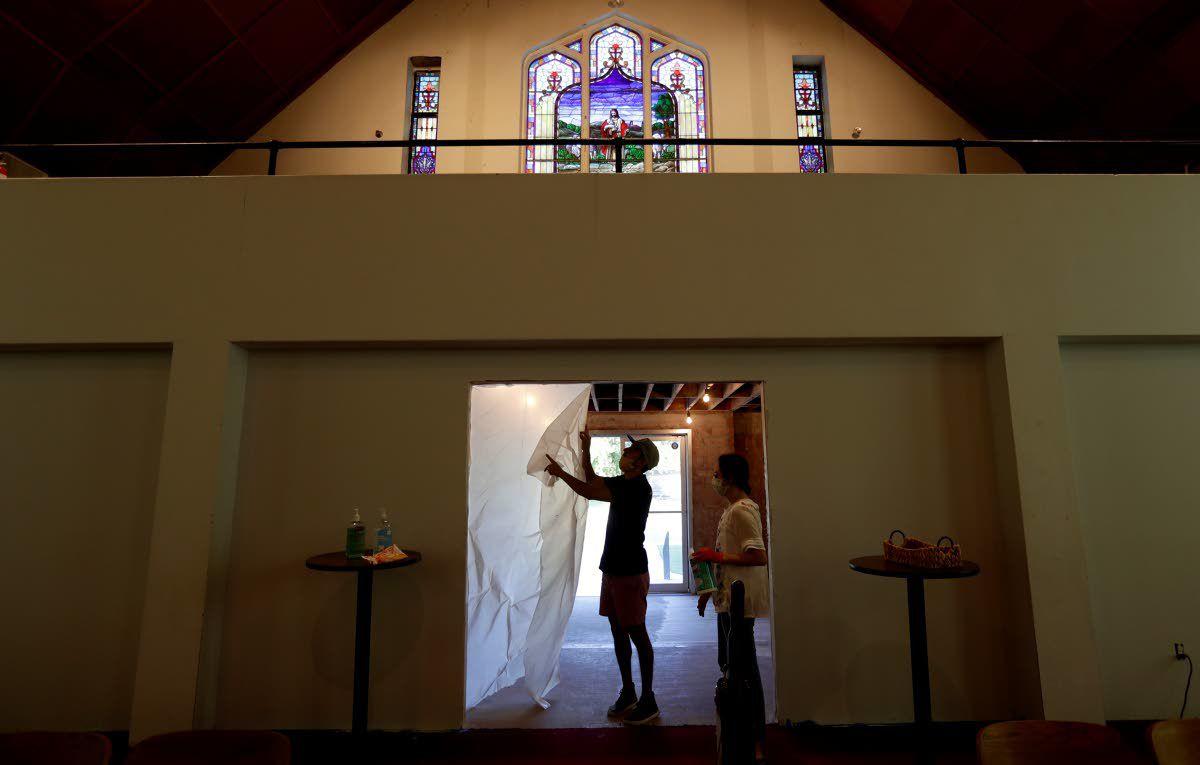 Alamo Heights Baptist Church pastor Bobby Contreras, left, and his wife Hannah, work to clean, sanitize and prepare the church for services this Sunday, in San Antonio, Wednesday, May 6, 2020,. Texas’ stay-at-home orders due to the COVID-19 pandemic have expired and Texas Gov. Greg Abbott has eased restrictions on many businesses that have now opened, churches and places or worship may resume live services with 25% capacity. (AP Photo/Eric Gay) 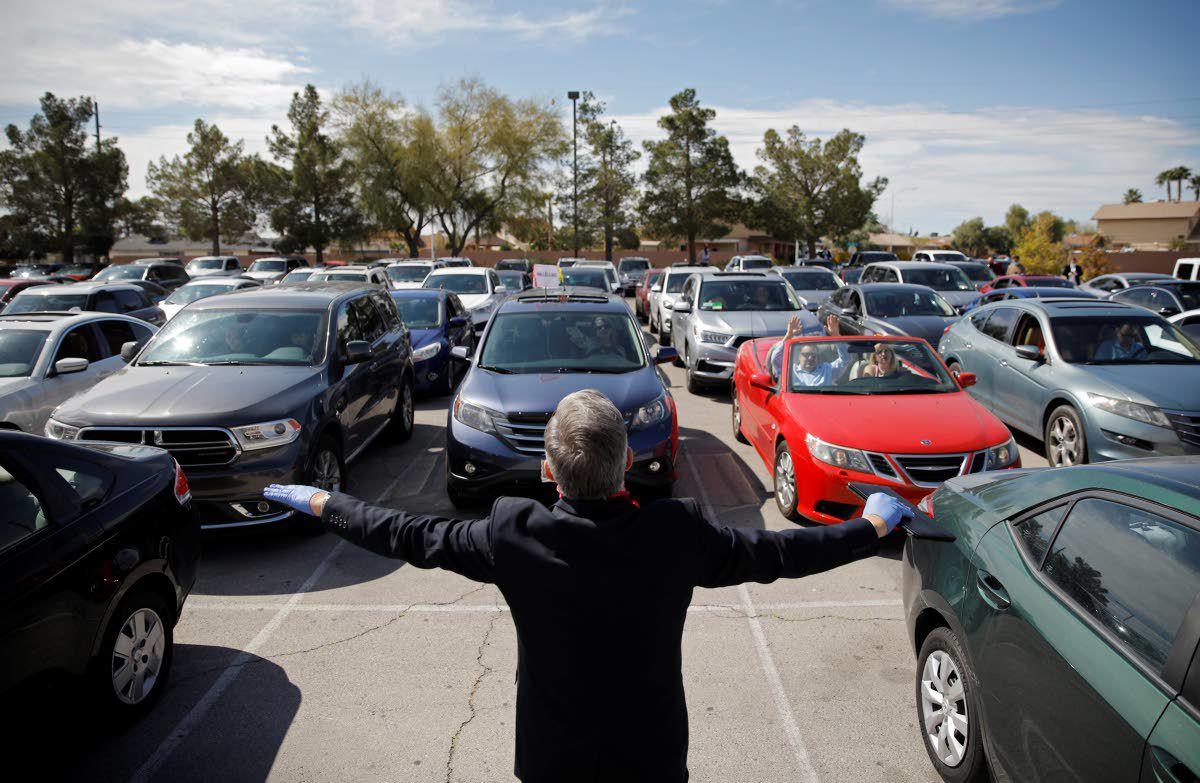 Pastor Paul Marc Goulet prays to people in their cars at an Easter drive-in service at the International Church of Las Vegas due to the coronavirus outbreak, Sunday, April 12, 2020, in Las Vegas. (AP Photo/John Locher)

Alamo Heights Baptist Church pastor Bobby Contreras, left, and his wife Hannah, work to clean, sanitize and prepare the church for services this Sunday, in San Antonio, Wednesday, May 6, 2020,. Texas’ stay-at-home orders due to the COVID-19 pandemic have expired and Texas Gov. Greg Abbott has eased restrictions on many businesses that have now opened, churches and places or worship may resume live services with 25% capacity. (AP Photo/Eric Gay)

Pastor Paul Marc Goulet prays to people in their cars at an Easter drive-in service at the International Church of Las Vegas due to the coronavirus outbreak, Sunday, April 12, 2020, in Las Vegas. (AP Photo/John Locher)

WASHINGTON, D.C. — While the White House looks ahead to reopening houses of worship, most Americans think in-person religious services should be barred or allowed only with limits during the coronavirus pandemic — and only about a third say that prohibiting in-person services violates religious freedom, a new poll finds.

States have taken different approaches to resuming gatherings as the coronavirus continues to spread, raising tough questions for religious leaders and the faithful about the appropriate time to return. But the findings of the new poll by the University of Chicago Divinity School and the Associated Press-NORC Center for Public Affairs Research suggest that, even as President Donald Trump projects eagerness to reopen, many religious Americans are fine with waiting longer to return to their churches, synagogues and mosques.

Among that group is 54-year-old Andre Harris of Chicago, a onetime Sunday school teacher who has shifted his routine from physical worship to the conference calls his church is holding during the pandemic.

Harris, a Methodist, said that until “either there’s a vaccine, or if we know that things have calmed down, I am not comfortable going back to the actual building.”

White evangelical Protestants, however, are particularly likely to think that in-person services should be allowed in some form, with just 35% saying they should be completely prohibited. Close to half – 46% -- also say they think prohibiting those services violates religious freedom.

That constituency’s support for some form of in-person worship underscores the political importance of Trump’s public calls to restore religious gatherings as a symbol of national recovery from the virus, as energizing evangelical voters remains a key element of the president’s reelection strategy. Trump won praise from some evangelical leaders for citing the aspirational ideal of “packed churches” on Easter during the first weeks of the pandemic, though his goal didn’t materialize on Christianity’s holiest day.

Trump has since consulted with religious leaders on a phased-in return to in-person worship.

“It’s wonderful to watch people over a laptop, but it’s not like being at a church,” Trump said during a Fox News town hall on Sunday. “And we have to get our people back to churches, and we’re going to start doing it soon.”

Vice President Mike Pence met with faith leaders Friday in Iowa to talk about their reopening of worship, describing the constraints on worship assemblies as “a source of heartache” for the faithful.

Iowa is one of several states, including Tennessee and Montana, where restrictions on in-person services are starting to ease as stay-home orders imposed to stop the virus run their course.

That’s in line with the preference of Patrick Gideons, 63, of Alvin, Texas, who said worshippers “should be able to do what they want.”

“If they want to be able to hold church the way they normally do, they should be able to do that,” said Gideons, a self-described born-again Baptist.

As houses of worship wrestle with when to reopen, draft guidance by a team at the Centers for Disease Control and Prevention that offered recommendations for faith gatherings has been shelved by the Trump administration. While those guidelines aimed to help religious organizations use best practices to protect people from the virus, leaders in various denominations have already initiated their own discussions.

“Churches are very aware of the implications of people gathering in their buildings,” Kenneth Carter, president of the United Methodist Church’s Council of Bishops, said in a recent interview about the draft CDC guidance.

The Justice Department last month sided with a Mississippi church in its legal challenge to local limits on drive-in worship. Still, the poll found 56% of Americans say prohibiting drive-in services does not violate religious freedom.

About a third of evangelical Protestants streamed services at least weekly in 2019, but about half do now. Among Catholics, the share streaming services weekly has increased from 11% to 22%.

For members of the Southern Baptist Convention, when and how to resume in-person worship “would be a congregation-by-congregation decision,” Russell Moore, president of the Ethics & Religious Liberty Commission, said in a recent interview about the draft CDC guidance.

Moore predicted that some virtual worship would continue even as areas resume in-person gatherings. Part of his work in offering resources to inform decisions, Moore said, involves “preparing churches for the fact that reopening probably won’t be one Sunday when everything goes back to the status quo.”

“Instead, there’s going to be probably a lengthy period of time where multiple things are happening at once,” Moore said.

The AP-NORC poll of 1,002 adults was conducted April 30-May 4 using a sample drawn from NORC’s probability-based AmeriSpeak Panel, which is designed to be representative of the U.S. population. The margin of sampling error for all respondents is plus or minus 4.2 percentage points.

Associated Press religion coverage receives support from the Lilly Endowment through the Religion News Foundation. The AP is solely responsible for this content.