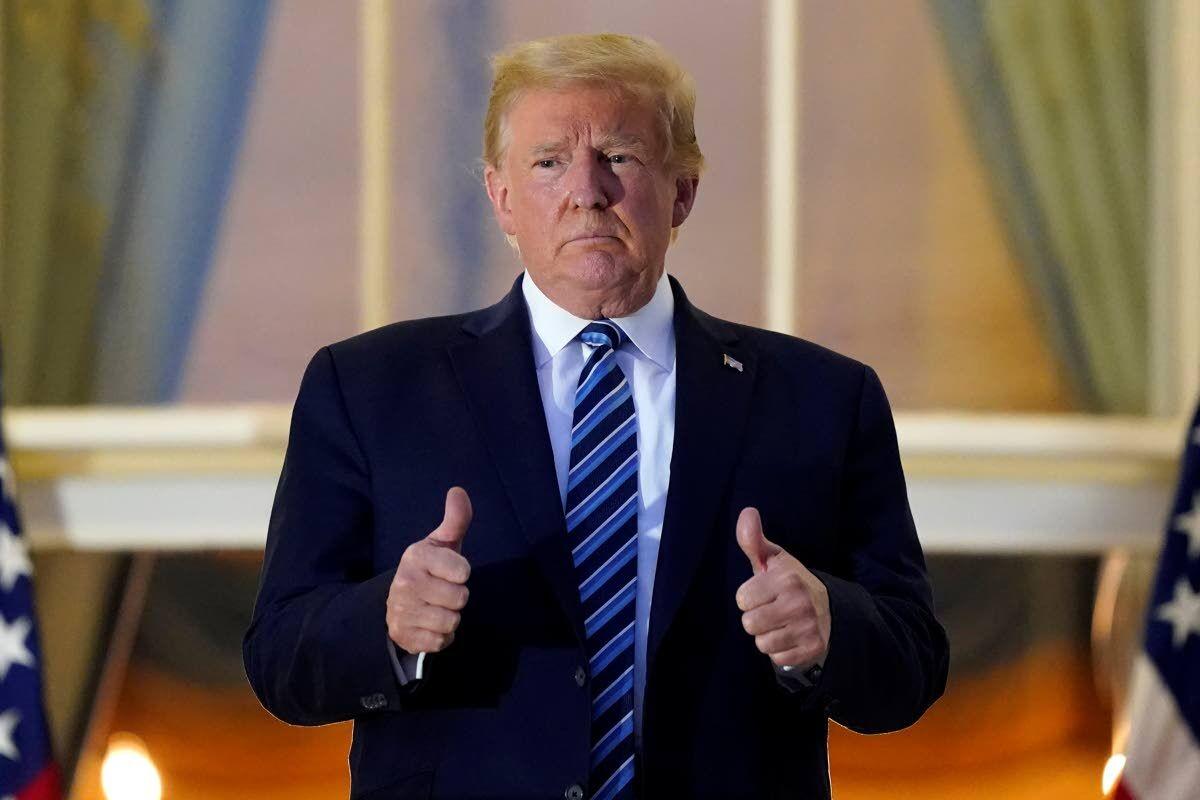 President Donald Trump stands on the balcony outside of the Blue Room as returns to the White House Monday, Oct. 5, 2020, in Washington, after leaving Walter Reed National Military Medical Center, in Bethesda, Md. Trump announced he tested positive for COVID-19 on Oct. 2. (AP Photo/Alex Brandon) 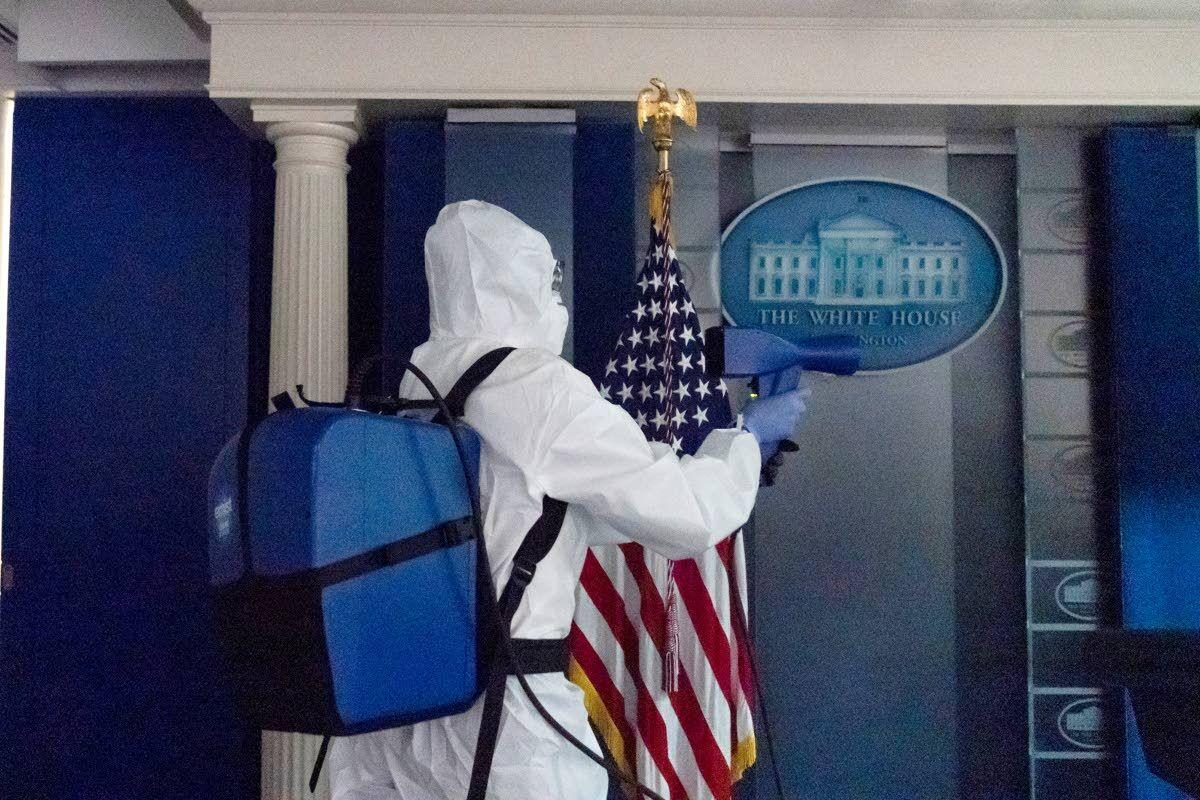 A member of the cleaning staff sprays The James Brady Briefing Room of the White House, Monday, Oct. 5, 2020, in Washington. (AP Photo/Alex Brandon) 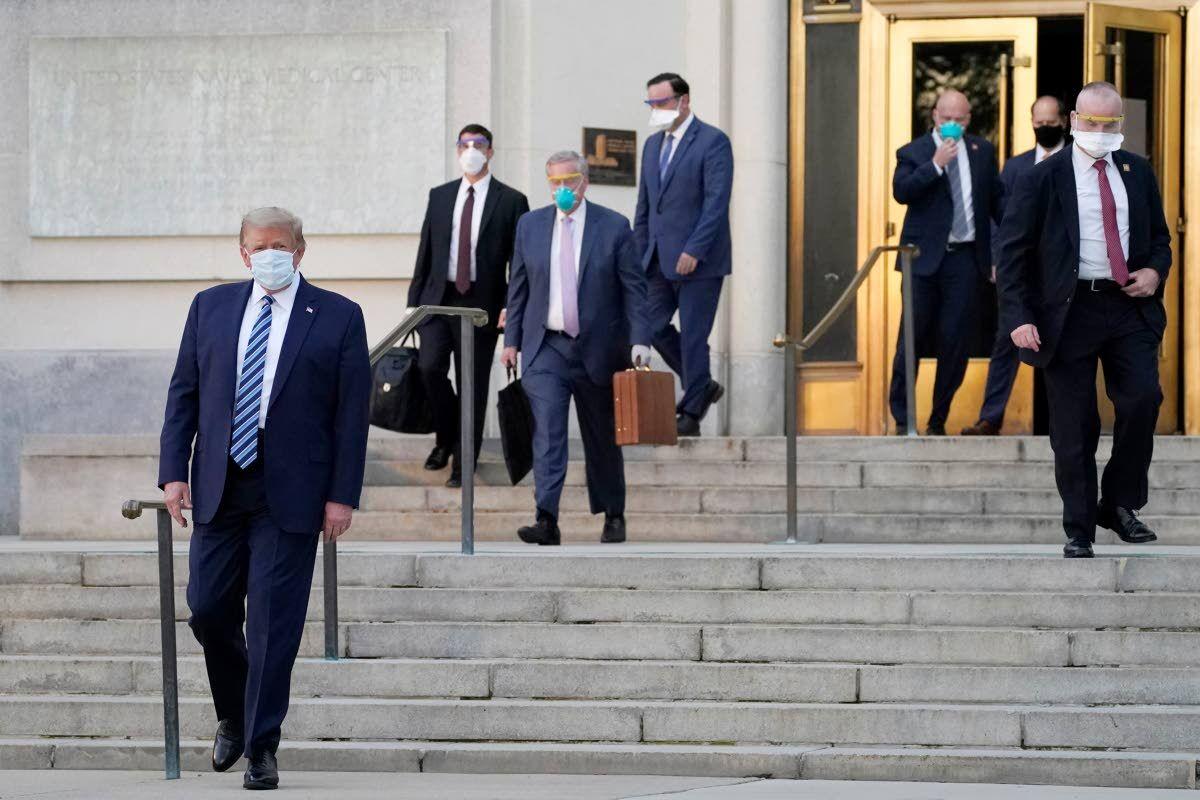 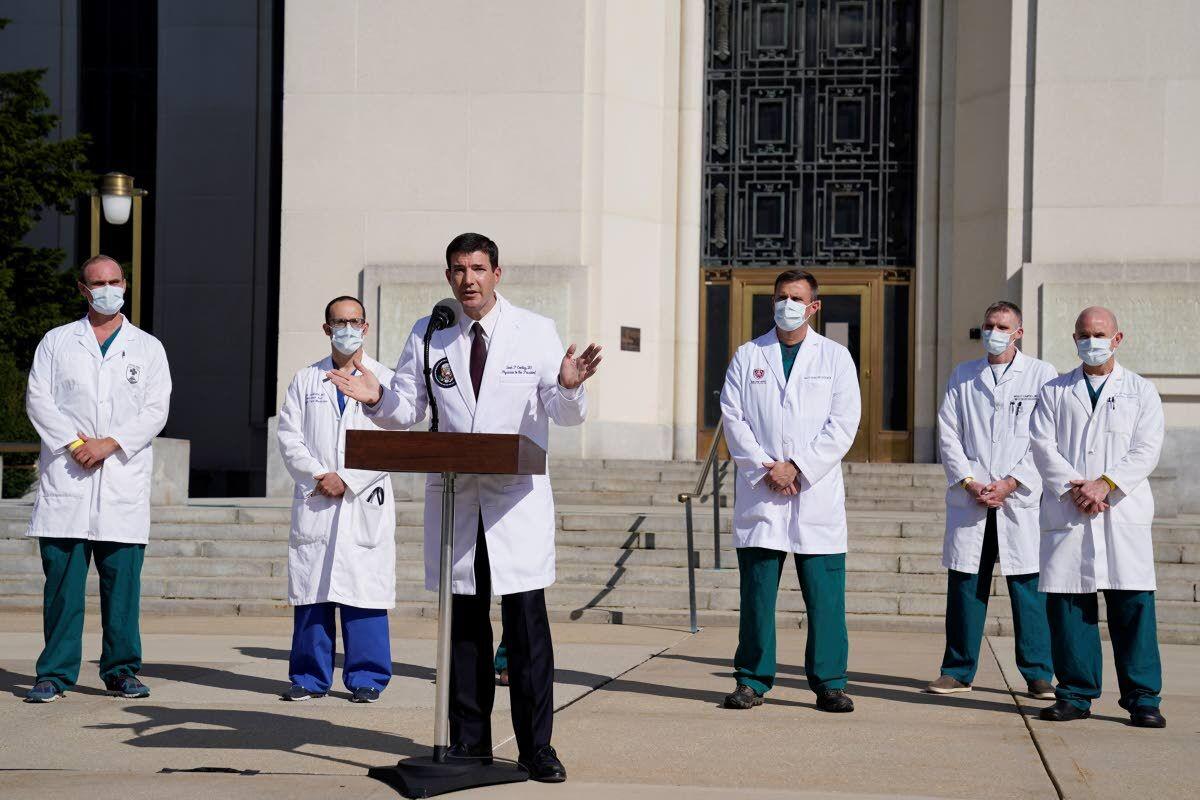 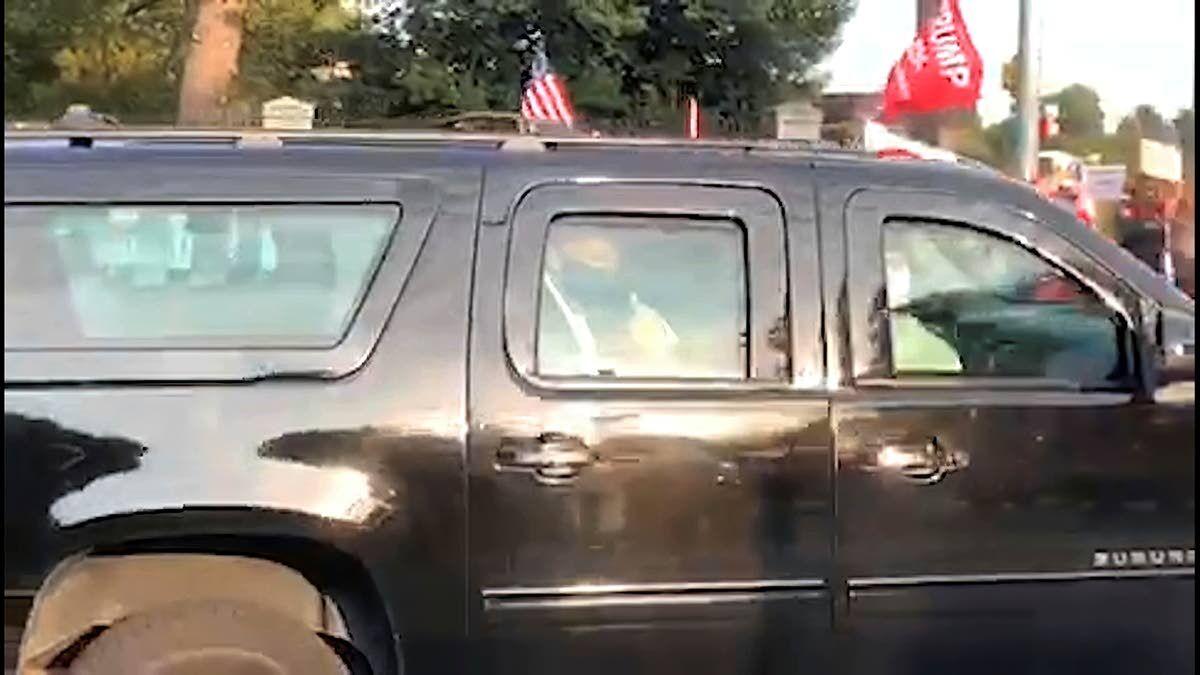 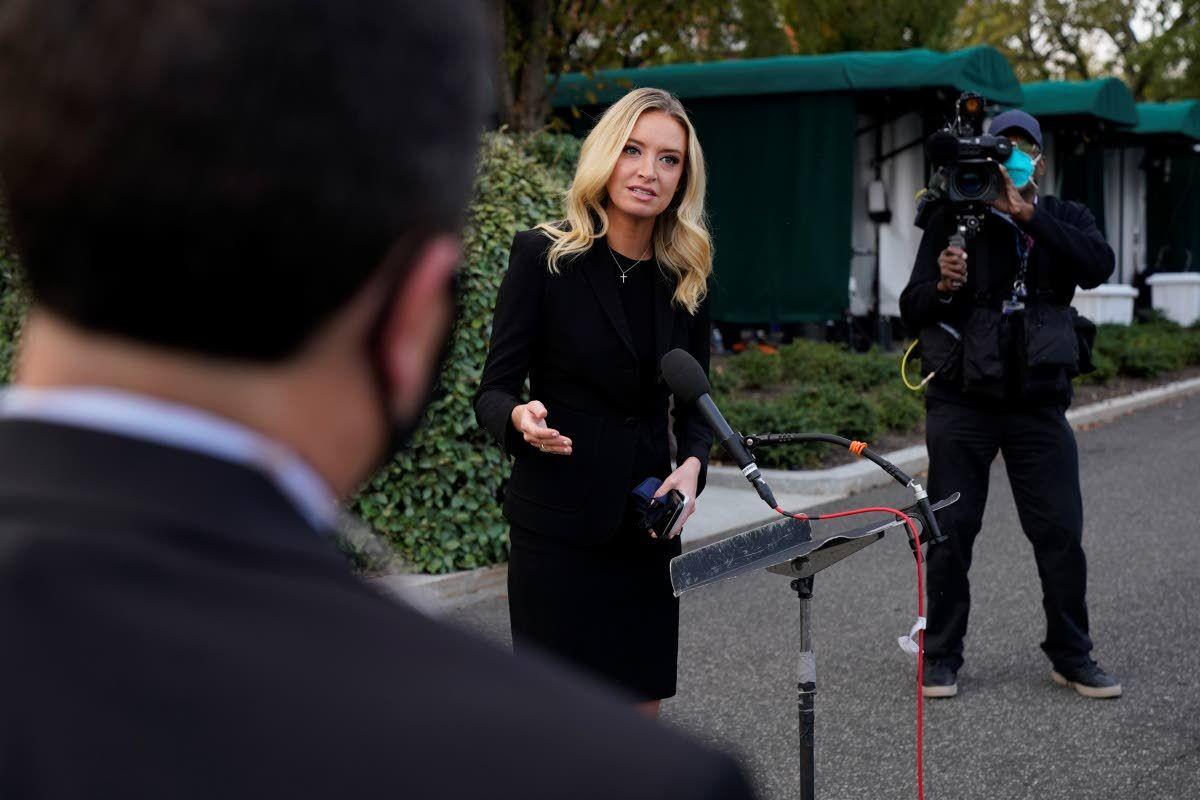 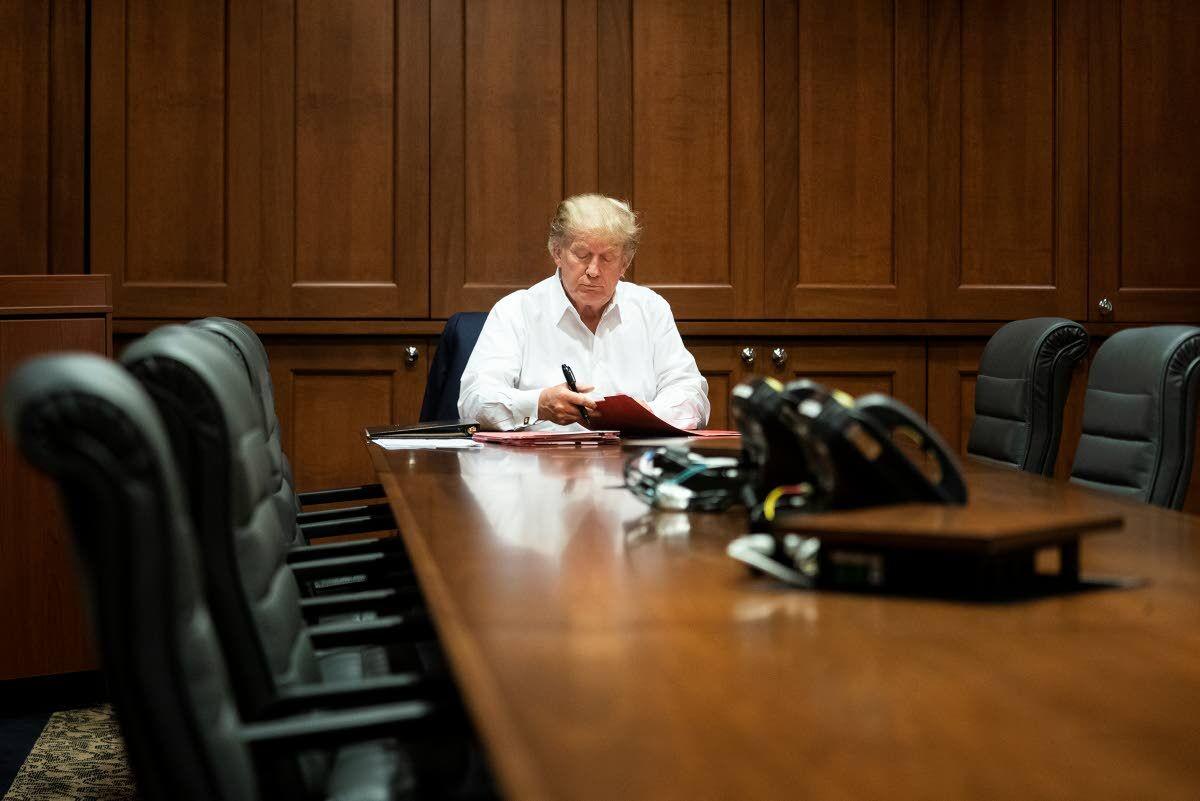 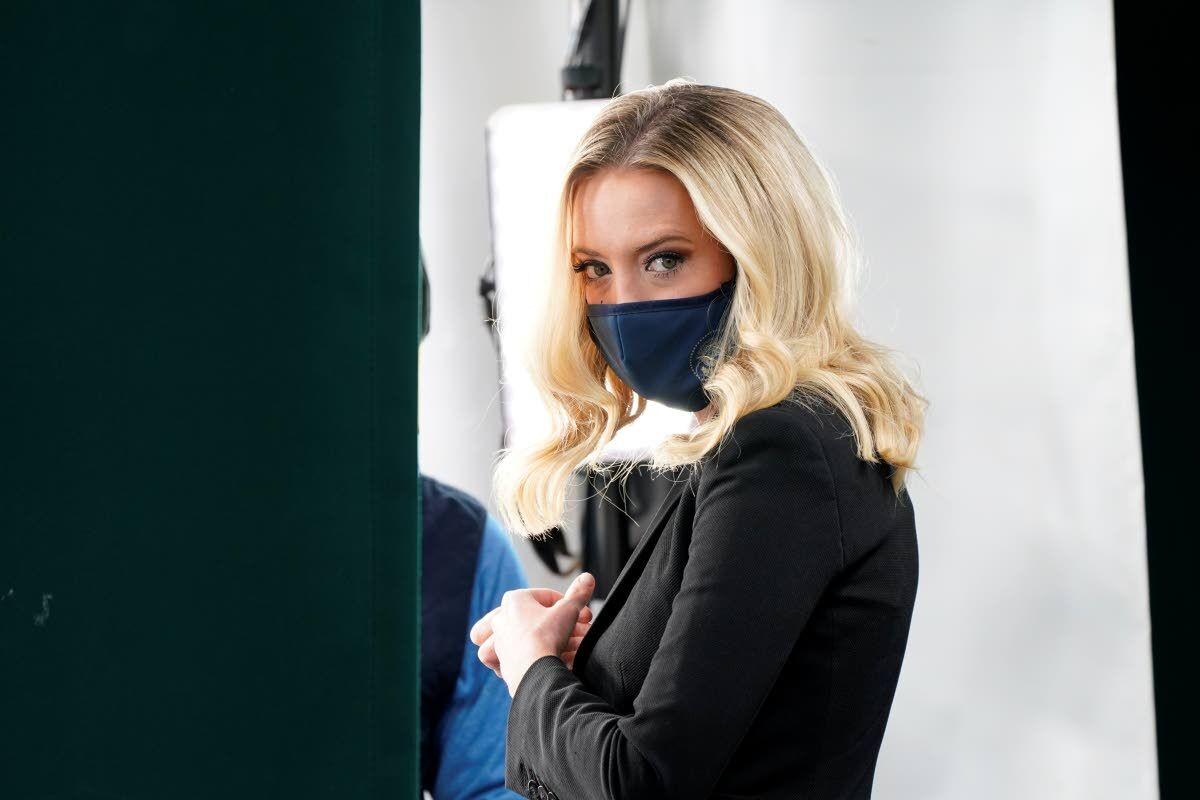 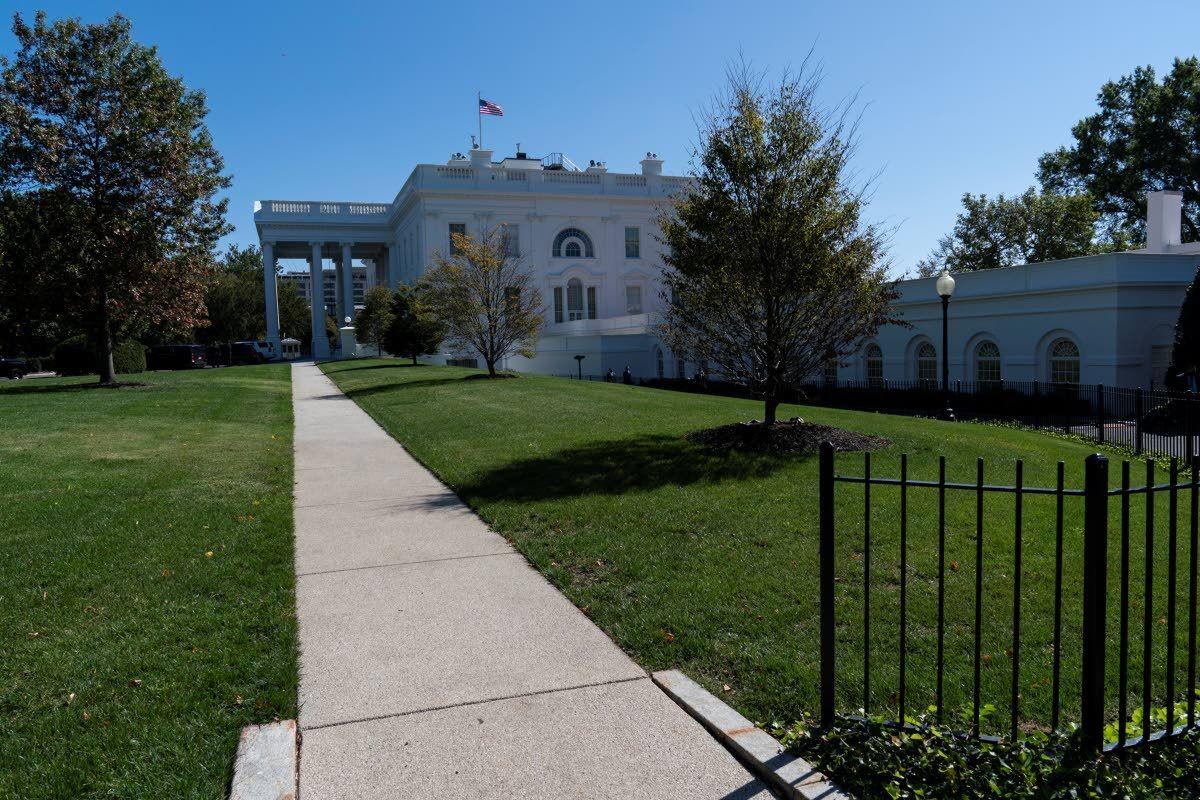 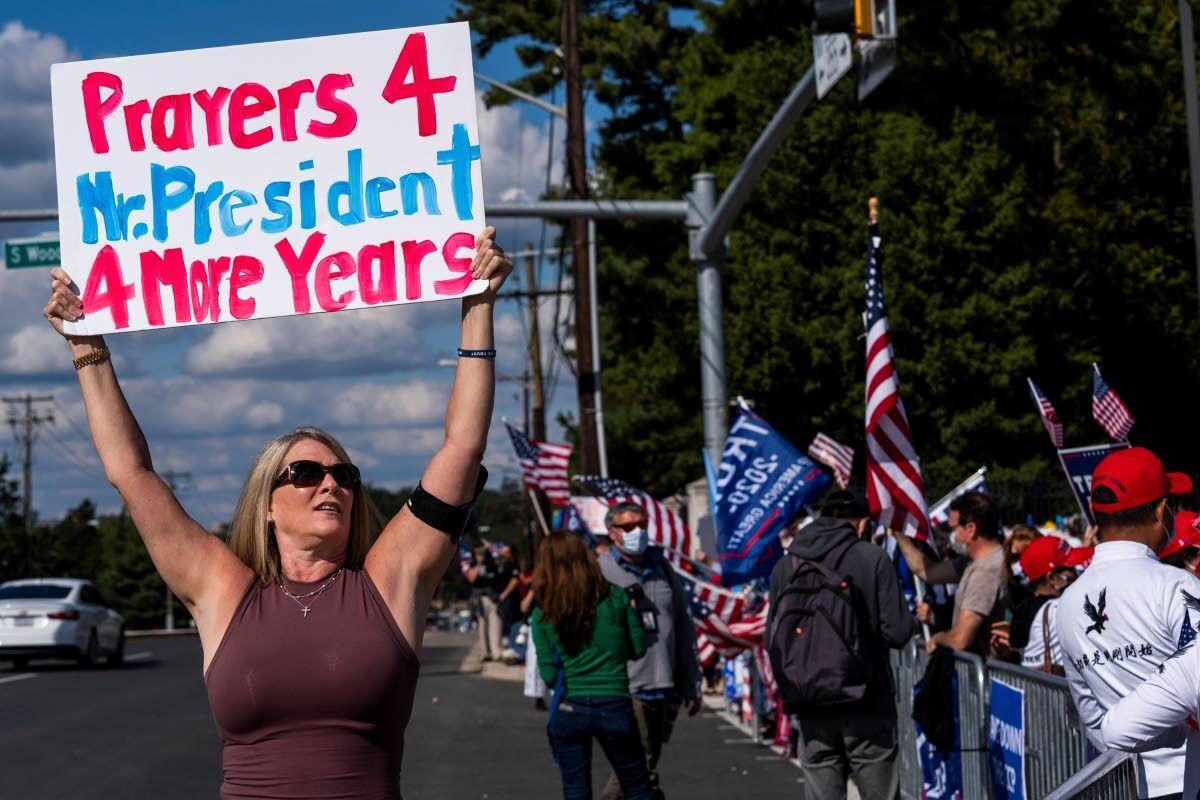 Karen Simon from the District of Columbia, let, waves a banner together with other supporters of President Donald Trump, gathered outside the Walter Reed National Military Medical Center in Bethesda, Md., Monday, Oct. 5, 2020. Trump said Monday he's leaving the military hospital where he has been treated for COVID-19 and will continue his recovery at the White House. (AP Photo/Manuel Balce Ceneta)

President Donald Trump stands on the balcony outside of the Blue Room as returns to the White House Monday, Oct. 5, 2020, in Washington, after leaving Walter Reed National Military Medical Center, in Bethesda, Md. Trump announced he tested positive for COVID-19 on Oct. 2. (AP Photo/Alex Brandon)

A member of the cleaning staff sprays The James Brady Briefing Room of the White House, Monday, Oct. 5, 2020, in Washington. (AP Photo/Alex Brandon)

Karen Simon from the District of Columbia, let, waves a banner together with other supporters of President Donald Trump, gathered outside the Walter Reed National Military Medical Center in Bethesda, Md., Monday, Oct. 5, 2020. Trump said Monday he's leaving the military hospital where he has been treated for COVID-19 and will continue his recovery at the White House. (AP Photo/Manuel Balce Ceneta)

WASHINGTON — President Donald Trump staged a dramatic return to the White House after leaving the military hospital where he was receiving an unprecedented level of care for COVID-19. He immediately ignited a new controversy by declaring that despite his illness the nation should not fear the virus that has killed more than 210,000 Americans — and then he entered the White House without a protective mask.

Trump’s message alarmed infectious disease experts and suggested the president’s own illness had not caused him to rethink his often-cavalier attitude toward the disease, which has also infected the first lady and several White House aides, including new cases revealed Monday.

Landing Monday night at the White House on Marine One, Trump gingerly climbed the South Portico steps, removed his mask and declared, “I feel good.” He gave a double thumbs-up to the departing helicopter from the portico terrace, where aides had arranged American flags for the sunset occasion. He entered the White House, where aides were visible milling about the Blue Room, without wearing a face covering.

The president left Walter Reed National Military Medical Center, where his doctor, Navy Cmdr. Sean Conley, said earlier Monday that the president remains contagious and would not be fully “out of the woods” for another week but that Trump had met or exceeded standards for discharge from the hospital. Trump is expected to continue his recovery at the White House, where the reach of the outbreak that has infected the highest levels of the U.S. government is still being uncovered.

Still, just a month before the election and anxious to project strength, Trump tweeted before leaving the hospital, “Will be back on the Campaign Trail soon!!!” And in case anyone missed his don’t-worry message earlier, he rushed out a new video from the White House.

Trump’s nonchalant message about not fearing the virus comes as his own administration has encouraged Americans to be very careful and take precautions to avoid contracting and spreading the disease as cases continue to spike across the country. For more than eight months, Trump’s efforts to play down the threat of the virus in hopes of propping up the economy ahead of the election have drawn bipartisan criticism.

“We have to be realistic in this: COVID is a complete threat to the American population,” Dr. David Nace of the University of Pittsburgh Medical Center, said of Trump’s comment.

“Most of the people aren’t so lucky as the president,” with an in-house medical unit and access to experimental treatments, added Nace, an expert on infections in older adults.

“It’s an unconscionable message,” agreed Dr. Sadiya Khan of Northwestern University Feinberg School of Medicine. “I would go so far as to say that it may precipitate or worsen spread.”

Likewise, Democratic presidential nominee Joe Biden, who spent more than 90 minutes on the debate stage with Trump last week, said during an NBC town hall Monday night that he was glad Trump seemed to be recovering well, “but there’s a lot to be concerned about -- 210,000 people have died. I hope no one walks away with the message that it’s not a problem.” Biden tested negative for the virus on Sunday.

There was pushback from a prominent Trump political supporter as well.

Republican Sen. John Cornyn of Texas told the Houston Chronicle editorial board that Trump had “let his guard down” in his effort to show that the country was moving beyond the virus and had created “confusion” about how to stay safe.

Conley said that because of Trump’s unusual level of treatment so early after discovery of his illness he was in “uncharted territory.” But the doctor also was upbeat at an afternoon briefing and said the president could resume his normal schedule once “there is no evidence of live virus still present.”

According to the Centers for Disease Control and Prevention, those with mild to moderate symptoms of COVID-19 can be contagious for as many as — and should isolate for at least — 10 days.

Trump’s arrival back at the White House raised new questions about how the administration was going to protect other officials from a disease that remains rampant in the president’s body. Press secretary Kayleigh McEnany announced she had tested positive for the virus Monday morning and was entering quarantine.

There were also lingering questions about potential long-term effects to the president — and even when he first came down with the virus.

Conley repeatedly declined to share results of medical scans of Trump’s lungs, saying he was not at liberty to discuss the information because Trump did not waive doctor-patient confidentiality on the subject. COVID-19 has been known to cause significant damage to the lungs of some patients. Conley also declined to share the date of Trump’s most recent negative test for the virus — a critical point for contact tracing and understanding where Trump was in the course of the disease.

Only a day earlier, Trump suggested he had finally grasped the true nature of the virus, saying in a video, “I get it.” But on Sunday afternoon, he ventured out of the hospital while contagious to salute cheering supporters by motorcade — an outing that disregarded precautions meant to contain the virus.

At the hospital, doctors revealed that his blood oxygen level had dropped suddenly twice in recent days and that they gave him a steroid typically only recommended for the very sick.

Trump’s experience with the disease has been dramatically different from most Americans, who do not have access to the same kind of monitoring and care. While most must cope with their symptoms — and fear of whether they’ll take a turn for the worse — at home and alone, Trump has been staying in the presidential suite of one of the nation’s best hospitals and has been given experimental drugs not readily available to the public. He returns to the White House, where there is a team of doctors on call with 24-hour monitoring.

Trump was leaving the hospital after receiving a fourth dose of the antiviral drug remdesivir Monday evening, Conley said. He will receive the fifth and final dose Tuesday at the White House.

Vice President Mike Pence returned to the campaign trail moments after Trump announced he would soon leave the hospital. The vice president boarded Air Force Two to fly to Salt Lake City, where he is to face off against Democratic vice presidential nominee Sen. Kamala Harris on Wednesday.

Trump, in his new video, defended his decision to repeatedly flout his own administration’s guidelines to slow the spread of the virus, including by holding rallies with thousands of mostly maskless supporters.

Apparently referring to any potential danger to himself rather than others, he said: “I stood out front. I led. Nobody that’s a leader would not do what I did.” He added: “And I know there’s a risk, there’s a danger. But that’s OK. And now I’m better. And maybe I’m immune, I don’t know.”

Even before Trump’s motorcade outing Sunday, some Secret Service agents had expressed concern about the lackadaisical attitude toward masks and social distancing inside the White House, but there isn’t much they can do, according to agents and officials who spoke to The Associated Press.

Trump’s aggressive course of treatment included the steroid dexamethasone and the single dose he was given Friday of an experimental drug from Regeneron Pharmaceuticals Inc. that supplies antibodies to help the immune system fight the virus. Trump on Friday also began a five-day course of remdesivir, a Gilead Sciences drug currently used for moderately and severely ill patients. The drugs work in different ways — the antibodies help the immune system rid the body of virus, and remdesivir curbs the virus’s ability to multiply.