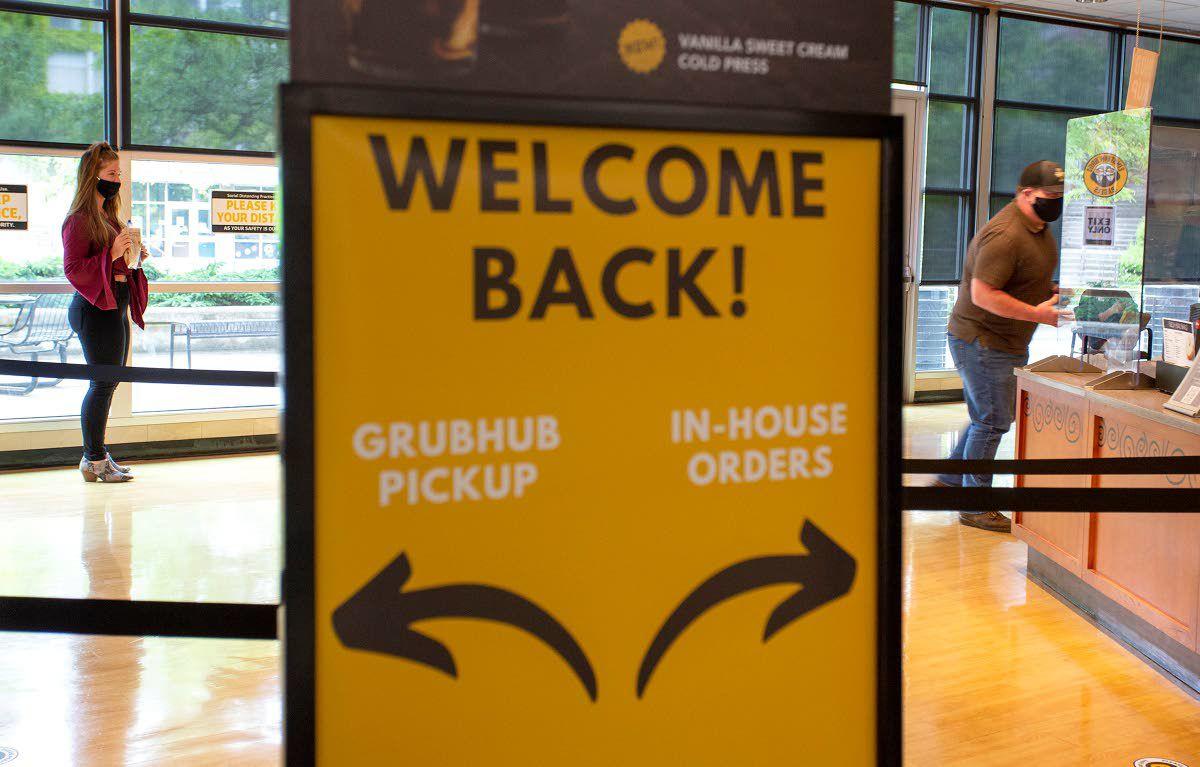 University of Idaho employees Bryanna Muscella, left, and Ryan Robinson wait for their orders Tuesday at Einstein Bros. Bagels at the Idaho Student Union Building in Moscow. The university is starting to reopen this week after being closed because of the coronavirus. 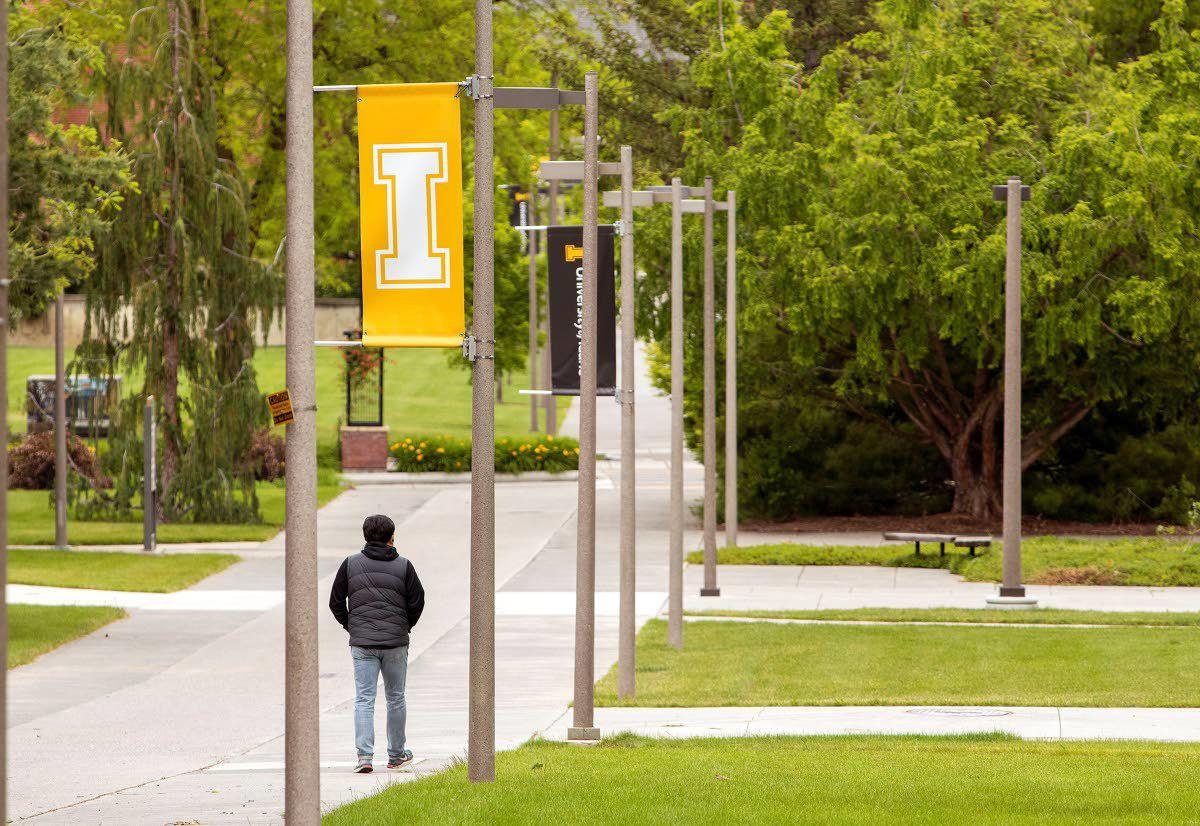 A pedestrian walks across the University of Idaho campus Tuesday in Moscow. 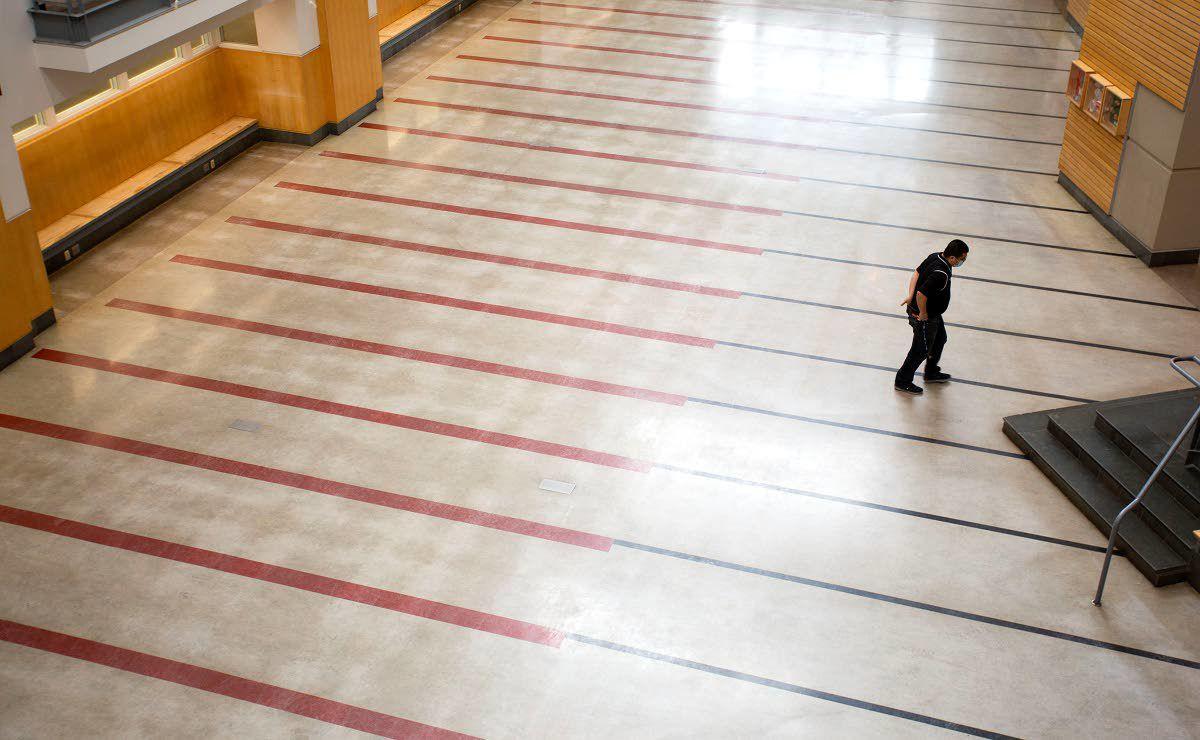 A lone University of Idaho employee walks through the empty food court at the Idaho Student Union Building on Tuesday in Moscow. The university is starting to reopen this week after being closed because of the coronavirus.

University of Idaho employees Bryanna Muscella, left, and Ryan Robinson wait for their orders Tuesday at Einstein Bros. Bagels at the Idaho Student Union Building in Moscow. The university is starting to reopen this week after being closed because of the coronavirus.

A pedestrian walks across the University of Idaho campus Tuesday in Moscow.

A lone University of Idaho employee walks through the empty food court at the Idaho Student Union Building on Tuesday in Moscow. The university is starting to reopen this week after being closed because of the coronavirus.

While most on-campus buildings are still closed to the public, the University of Idaho has tentatively begun reopening retail in university-owned facilities — starting with Einstein Bros. Bagels.

Vandals Dining Marketing Specialist Bryanna Muscella said while there is no seating available inside, the small campus cafe is now open for outdoor seating and pickup orders Monday through Friday from 7 a.m. to 2 p.m. She said they are also rolling out contactless ordering through the mobile app GrubHub.

The campus recreation center opened in a very limited capacity last week to those that make an appointment, but Muscella said other university-owned retail locations won’t open until August.

“We’re going to be doing what we’re calling a ‘rolling open’ in retail, and so on Aug. 10, that is our projected open date for Chick-Fil-A, and then Aug. 17, will be a Qdoba opening,” Muscella said. “Then the first day of fall classes, we will roll open everything else in retail, and then resident dining will be closed until the beginning of the fall semester.”

UI Director of Communications Jodi Walker said the university bookstore and adjoined Starbucks opened during previous stages of the Idaho’s four-phase reopening plan. Both are observing appropriate safety and sanitation guidelines, she said.

Even with safety protocols in place, Muscella stressed that dining locations will still be able to accommodate students who have dietary restrictions. Walker said capacity limits in dining areas would not extend to adjoined residence halls. She said the residence halls themselves will be populated more or less as normal for the fall semester with the exception of the Theophilus Tower where rooms will be limited to a single resident.

“The tower is the one residence hall we have where they have communal bathrooms and so one person per room will cut down the capacity in the tower and reduce the risk of spread,” Walker said. “The others in Wallace complex and in the (Living Learning Centers) will have just our traditional living arrangements.”

Walker said guidance from state health authorities indicates other on-campus living facilities, which usually feature a bathroom shared by a small group of suite-mates, are similar to an at-home arrangement. She said it is relatively easy to begin isolation protocols for a small group rather than for an entire floor of residents.

Walker said the UI’s requirement that first-year students reside on campus is still in place, but students can apply for a waiver to that requirement.

The UI has also lent guidance for fraternities and sororities as they determine how to safely welcome members who live in the chapter houses back to school, Walker said. She said each house has submitted a plan to the UI for how they will conduct the coming semester which include strategies for social distancing and reducing capacity of live-in members on campus.

If all goes as planned, Walker said after July 6, most staff and faculty will have returned to campus and the majority of on-campus buildings will reopen as well.

She said that on June 26 the school will host its first in-person “Idaho Bound” event for prospective students since statewide isolation orders went into effect. She said about 100 students have signed up for the event, however masks will be required and students will be broken into smaller groups.

She said everyone — including staff, students, faculty and visitors to campus — must do their part to keep the college on the path to some version of normal.

“We just asked that everyone be engaged — everybody has a role to play in ensuring that we can continue to have face-to-face classes and be able to remain on campus,” Walker said. “If everybody does their part, hopefully we’ll be okay and be able to make it through this very strange semester.”

Scott Jackson can be reached by email to sjackson@dnews.com.