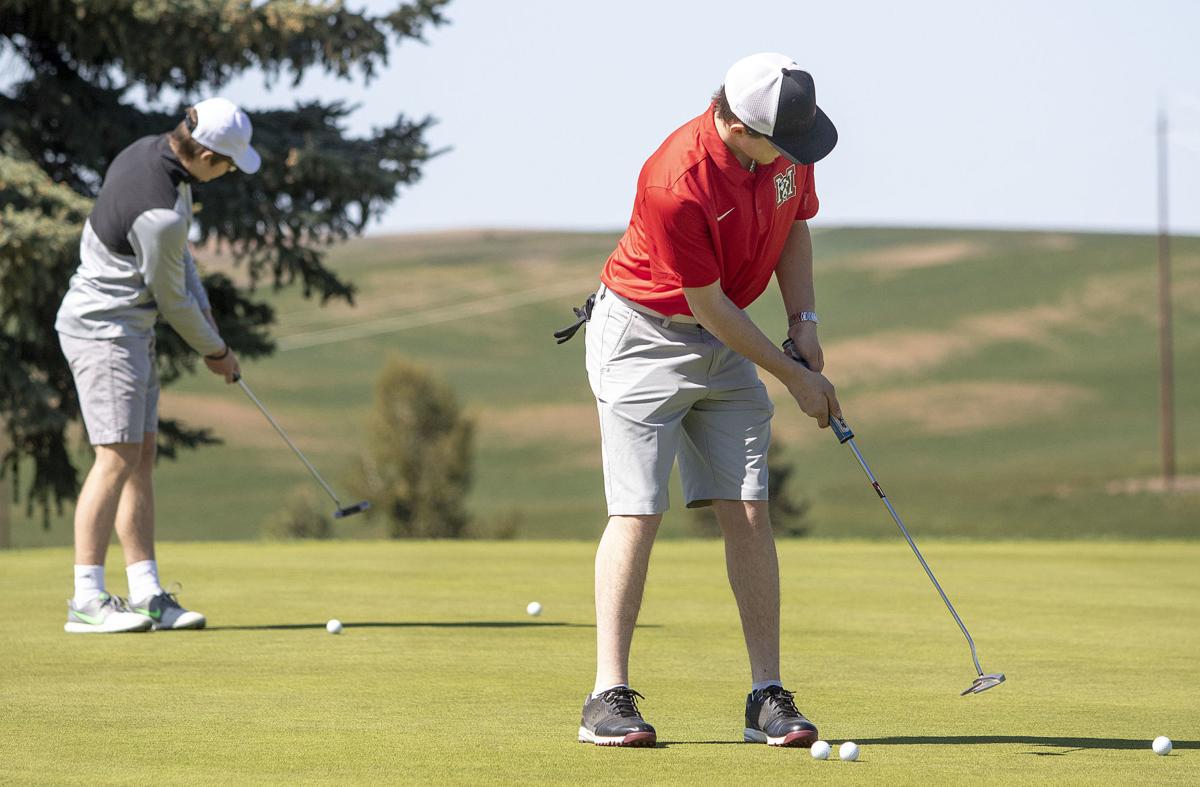 Sam Kees, left, and Tayler Parsons pratice on the putting green on Monday at the University of Idaho Golf Course in Moscow. 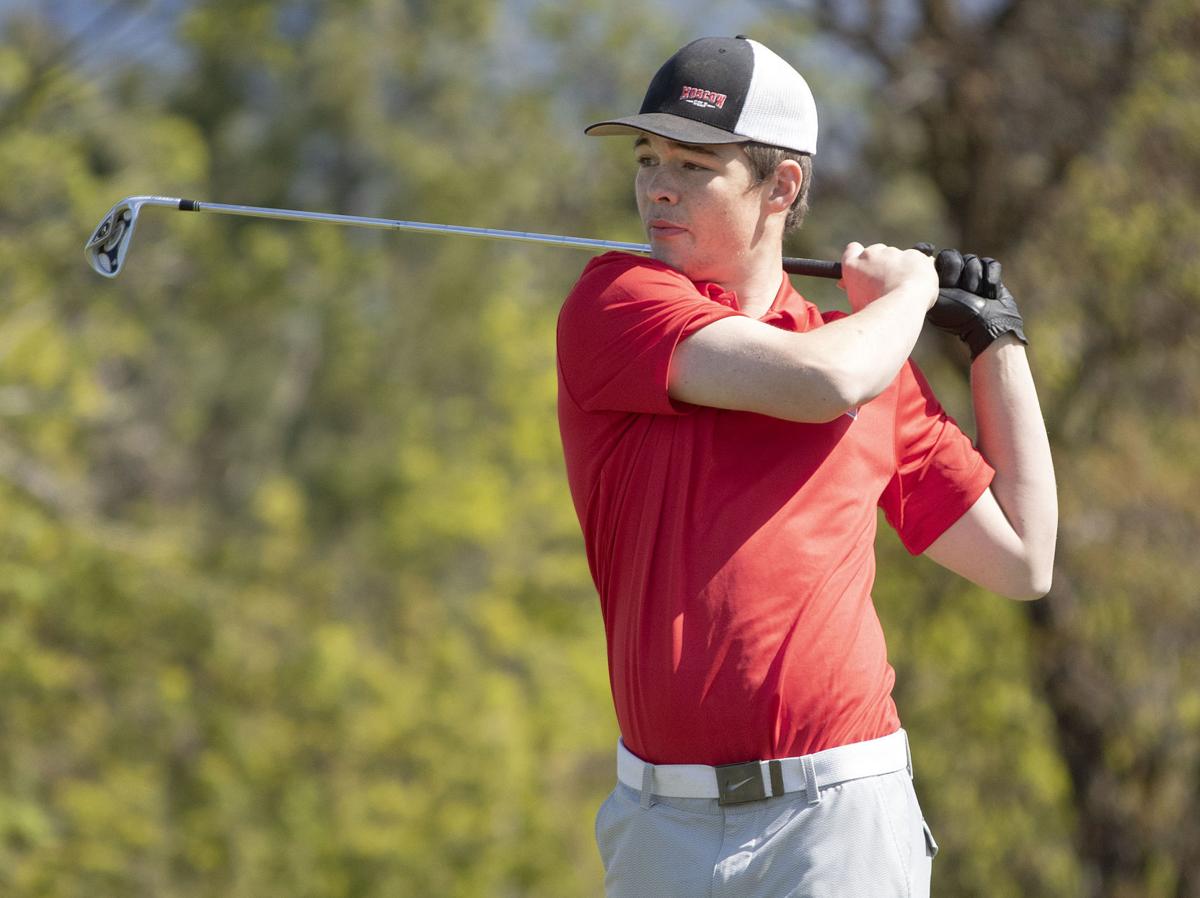 Tayler Parsons tees-off on the first hold on Monday at the University of Idaho Golf Course in Moscow. Parsons is a member of the Moscow High School Golf team, which had the remainder of its season suspended because of the coronavirus. 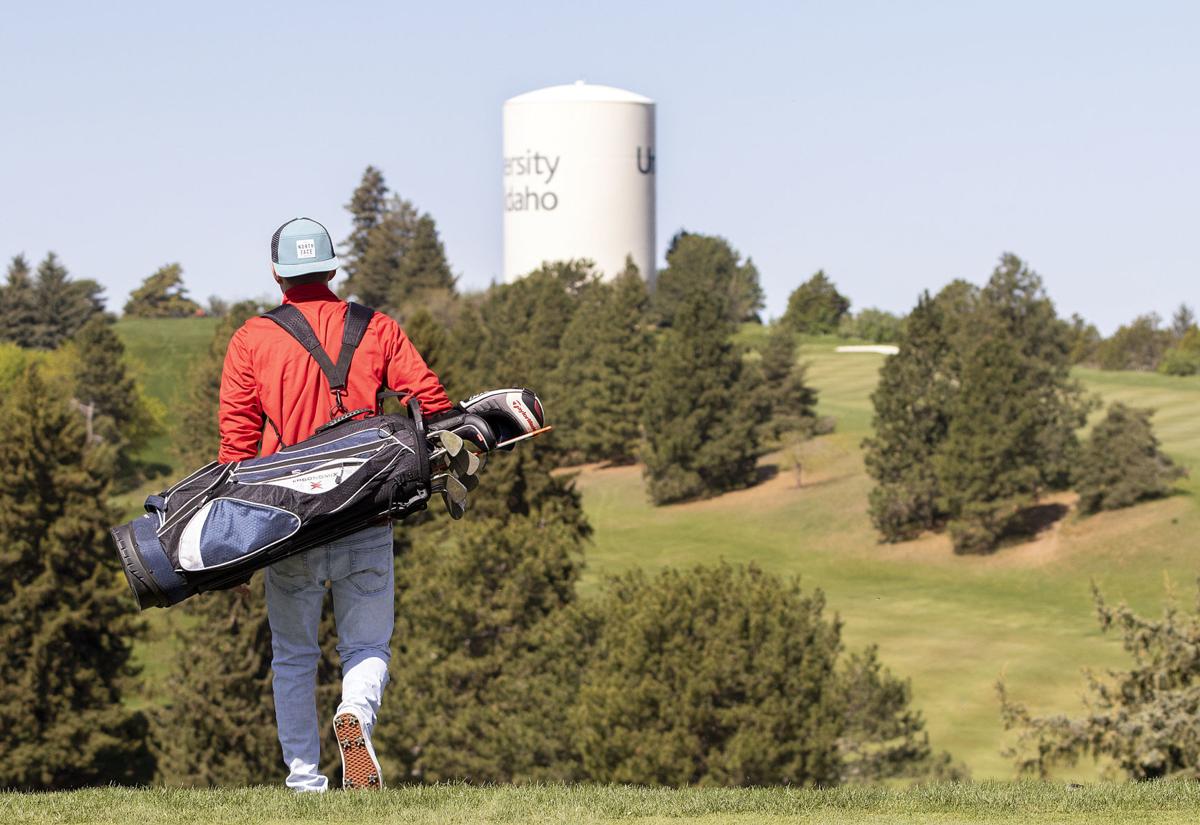 A golfer walks down the fairway after teeing-off on the first hole on Monday at the University of Idaho Golf Course in Moscow. 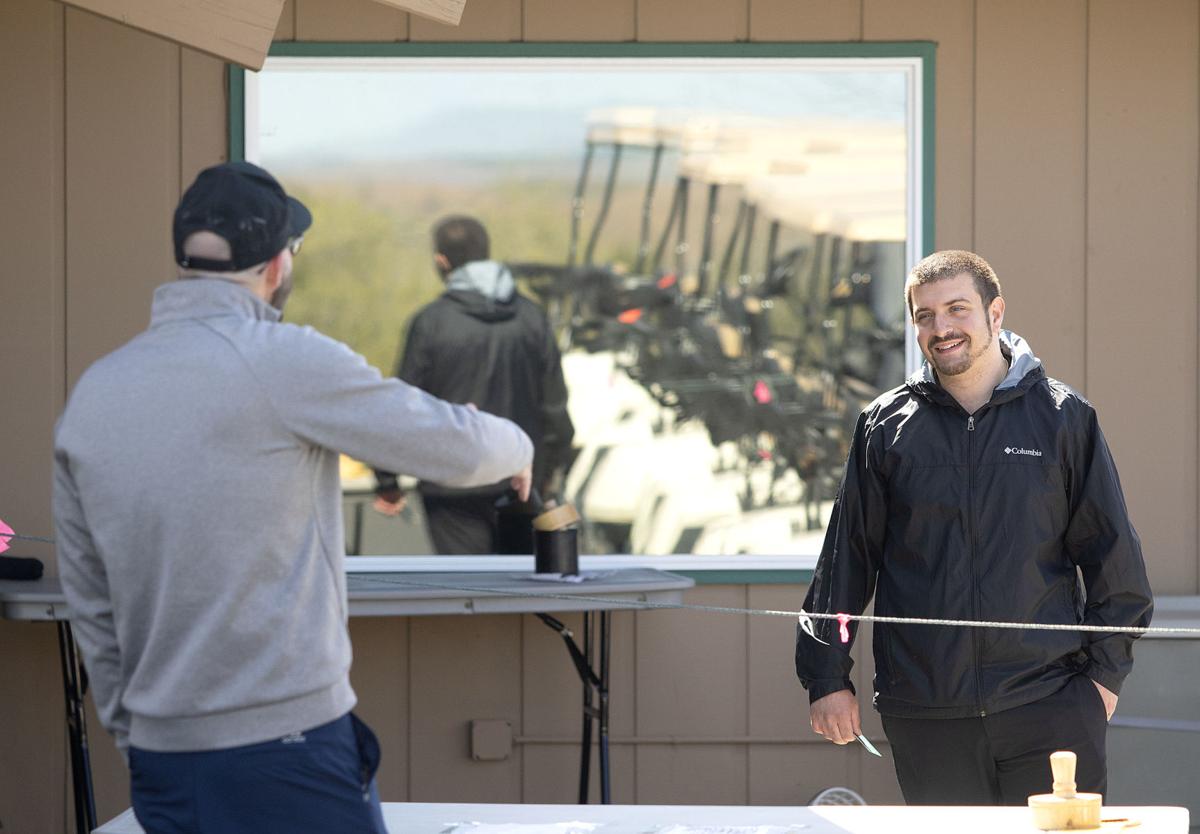 Head Golf Professional Andrew Elaimy, right, helps Dave Morrissey of Pullman check in for his round of golf on Monday at the University of Idaho Golf Course in Moscow.

Sam Kees, left, and Tayler Parsons pratice on the putting green on Monday at the University of Idaho Golf Course in Moscow.

Tayler Parsons tees-off on the first hold on Monday at the University of Idaho Golf Course in Moscow. Parsons is a member of the Moscow High School Golf team, which had the remainder of its season suspended because of the coronavirus.

A golfer walks down the fairway after teeing-off on the first hole on Monday at the University of Idaho Golf Course in Moscow.

Head Golf Professional Andrew Elaimy, right, helps Dave Morrissey of Pullman check in for his round of golf on Monday at the University of Idaho Golf Course in Moscow.

Golf courses in Idaho have seen a boost in players — and are remaining as consistent as possible financially — but have had to adapt to new guidelines.

Across the border to the west, clubs are champing at the bit to begin recouping their losses during the area’s busiest time for golf.

Today, the pastime will recommence in Washington after about 1½ months without because of the state’s stay-at-home order to combat the spread of the coronavirus.

With no golfing options in Washington and much looser restrictions, some Idaho courses near the border have been breaking closer to even.

“It’s a little busier, not significantly, but it is.”

Among many of the area’s Idaho courses, driving ranges and pro shops have been closed; restaurants haven’t been running at full strength; club rentals have been put on hold, and — until recently — a walking-only rule had been put in place.

But broadly speaking, people were tired of being cooped up inside while the weather became increasingly pleasant, and the sport can act as a getaway in which social distancing comes n­­aturally.

“It’s been about as busy as you can imagine, especially with limited hours (starting at 10 a.m.),” said Andrew Elaimy, the head pro at the University of Idaho Golf Course. “We sold more season passes and had more customers than ever before in the month of April.

“I think a lot of it was because area courses, like in Clarkston and Pullman, have been closed, and a few others are members-only. Unfortunately, there just weren’t many courses available. … Luckily, the course is in amazing shape. People are digging their teeth into golf.”

At UI, payments are processed online to avoid in-person encounters, and sand rakes and ball washers have been removed. Flagsticks have been substituted with smaller flags typically used for irrigation, visible from about 100 yards out. Beginning today, single-player golf carts will go for $28 — two people may ride, provided they live in the same household. An on-course rest room will also be open.

“A lot of it was just getting people onboard with the guidelines,” Elaimy said. “There are a lot of recreational golfers in the area, so it’s kind of been a priority making golf an available outdoor activity.”

Other Idaho courses are operating while accommodating similar measures. Bryden Canyon runs its business from outside the clubhouse, and has widened the gaps between tee times. At Grangeville’s public course, a food truck is parked outside to make up for the closure of the kitchen.

While their hometown clubs were closed, many Washingtonian players had drifted toward nearby Gem State courses — that is, if they didn’t already call an Idaho club home, like several Pullmanites do with UI’s course. Now, many can return to their local links, which need the business.

“It happened right as we were entering golf season, so the timing was bad,” said Tom Bugbee, the chief operating officer at CourseCo, the managing company of Pullman’s Palouse Ridge Golf Club, which plays home to Washington State. “Just as bad is the work for employees. That’s what we’re most excited about, is bringing people back to work. Thankfully, we didn’t have to lay anyone off, (just furloughed).”

A list of 24 requirements was recently released by the state to Washington courses planning on reopening today. They are largely preventative measures, including increased sanitation, no “touch points” — like merchandise, flagsticks, holes and cash — and personal-spacing rules, like only two people per group and limiting entrance to pro shops.

A log of customer contact information will also be maintained “in case contact tracing is necessary,” Bugbee said, and these rules will be monitored. At Palouse Ridge, “safety ambassadors” have been trained, and will patrol the course in rotating shifts.

“The new norms of golf are a lot different than they were three months ago,” Bugbee said. “We’ve all had to adjust to how we approach the business.”

Carlson, whose course sold about 80 percent of its season passes before closing in March, has been preparing keenly to pick up again, with an altered appearance. Quail Ridge is “operating through our pro-shop window,” and following a one-at-a-time system for entrance to the clubhouse while “doing just a lot of sanitizing and social distancing.” Congregations before and after rounds aren’t permitted.

“We’re just being really careful,” Carlson said. “With social distancing, I think there’ll be a lot of steady days, but not packed by any means. A lot of people come out in groups. Golf’s important, but so is the social aspect of it. There are only so many tee times.

“We’re losing most of our tournaments, too, because we can’t have groups.”

That’s one of the trickiest parts — along with the maintenance expenses over the 41 days courses were closed to the public. Washington golf clubs are behind, but making up for the loss is difficult with twosomes only and spaced-out tee times.

“You’re kinda cutting the capacity in half,” Bugbee said.

But starting today, albeit with a new look, Washington players can “get their fix back, so to speak,” Bugbee said.

NOTABLE — On April 22, Idaho men’s golf senior Sean Langham got some work in, firing an 11-under 61 at the UI course, the unofficial course record.

“He did it without traditional course amenities, swung freely and had a really solid round,” Elaimy said.