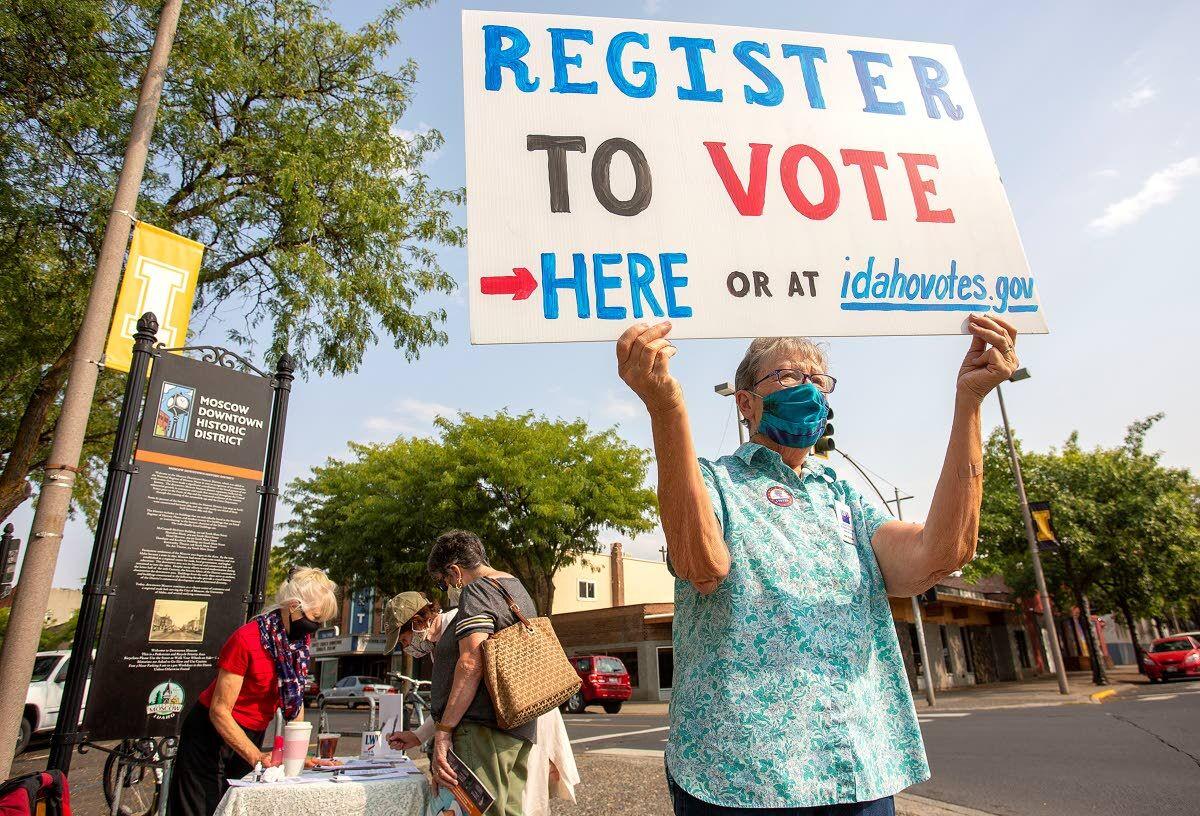 Karen Lewis, left, helps people register to vote while Joan Klingler holds up a sign during a voter-registration event organized by the Moscow League of Women Voters on Tuesday in Moscow. 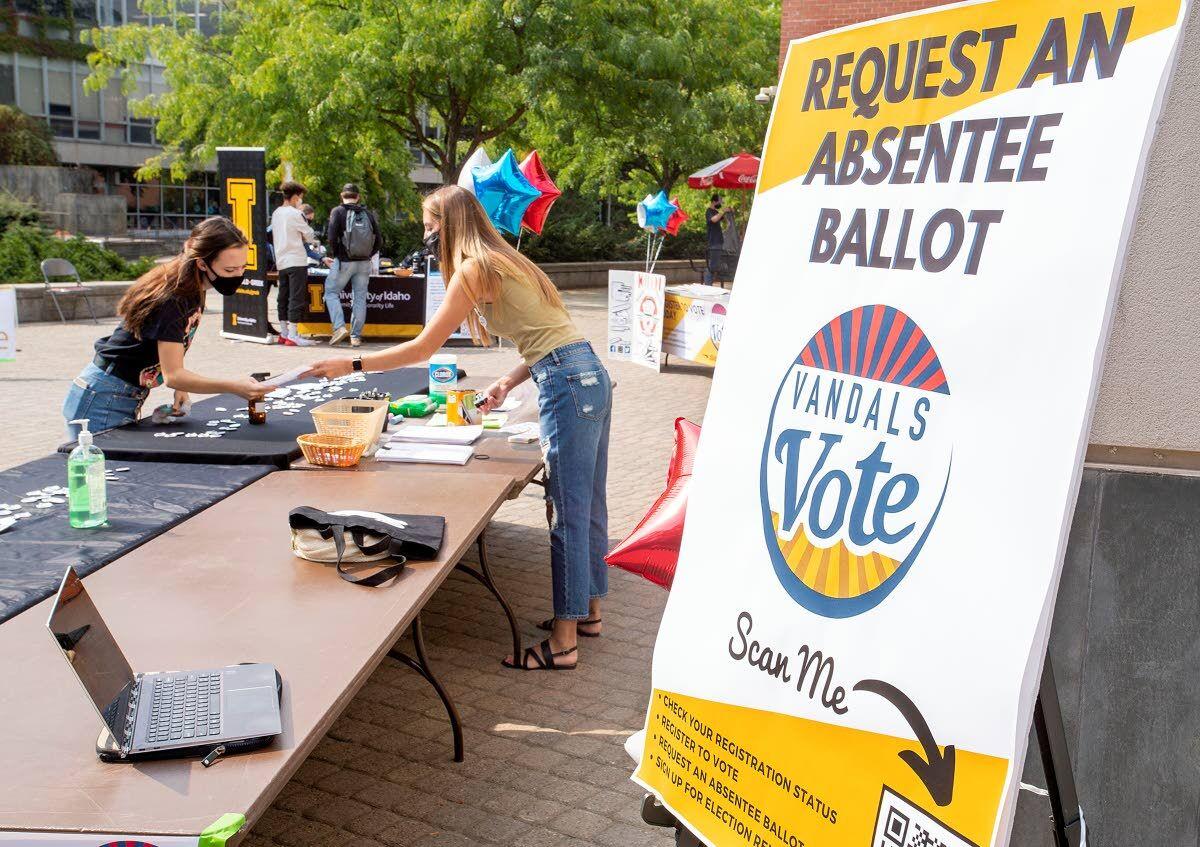 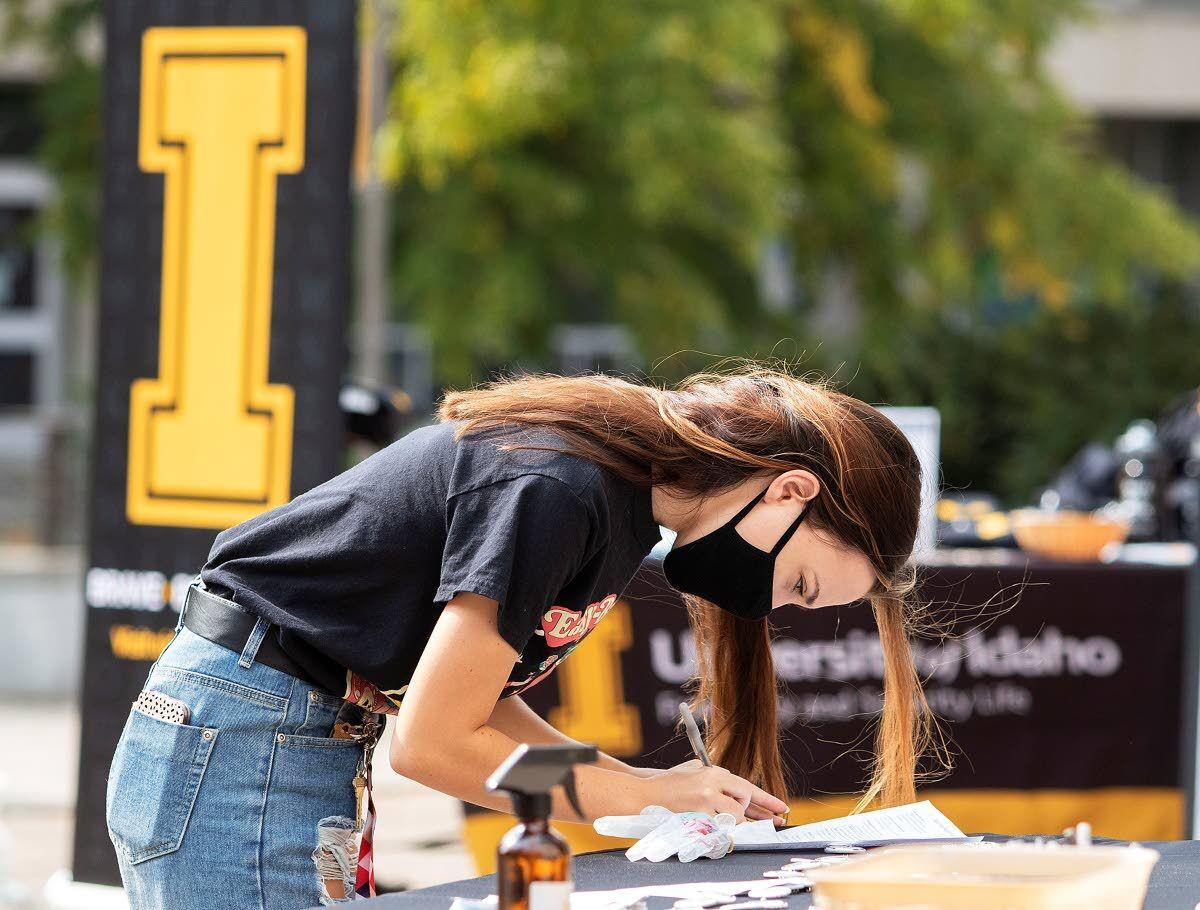 Karen Lewis, left, helps people register to vote while Joan Klingler holds up a sign during a voter-registration event organized by the Moscow League of Women Voters on Tuesday in Moscow.

“There’s been a lot of discussion about the mail,” Westberg said during a League of Women Voters of Moscow Zoom meeting Wednesday.

She said all election material is marked as such for U.S. Postal Service workers to see.

“They’re (postmasters) keeping their eyes open for election material and making sure that it’s not held up, that it’s moved along quickly,” Westberg said.

She said Linden, Farmington and Onaway have always been mail-voting precincts in Latah County.

“These people have been voting by mail for years and we have not had any problem mailing those ballots out and getting those ballots back,” Westberg said. “And people actually like it. That’s where our highest voter turnout is.”

Westberg said she encourages residents to vote by mail to reduce overcrowding at the polls, and thus, the spread of COVID-19. She said in an email 36 percent of Latah County registered voters have requested an absentee ballot thus far.

There will be 13 county polling places Nov. 3, including the University of Idaho Student Recreation Center, the Hamilton Indoor Recreation Center and the Latah County Fairgrounds. All three are in Moscow.

Moscow precincts 1, 8, 16 and 18, which are all located at or near the UI campus, will vote at the UI Student Recreation Center.

Westberg said the county had an agreement to use the UI Bruce M. Pitman Center as a polling location, but the university needed that space for COVID-19 reasons.

As far as poll workers go, Westberg said she has more volunteer poll workers than she can use. She said some businesses told their employees they will be paid to take Nov. 3 off and work at the polls if they choose.

“It’s very heartwarming to know that we have that kind of community that will step up when they see a need and come forward,” she said.

Westberg said absentee ballots can be dropped off at the ballot box in the courthouse parking lot instead of mailed. She also reminded voters to make sure the ballot the county sends them is the correct one.

Oct. 9 is the deadline to register to vote. If residents do not register by then, they can register during the early voting period or at the polls Nov. 3.

Oct. 23 is the deadline to request an absentee ballot. Ballots must be in the elections office by 8 p.m. Nov. 3.