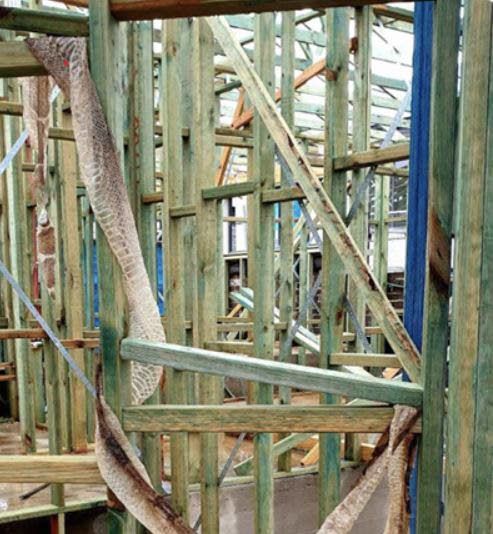 This snake shed, shown in image clipped from a Twitter account, has all the makings of a fake.

This snake shed, shown in image clipped from a Twitter account, has all the makings of a fake.

In Queensland, Australia, a pet cat went missing. At about the same time, the cat’s owner found a 2 meter-long python sleeping in the sunshine in her garden. She called a snake catcher (a real job in Australia and Africa).

Snake catcher Stuart McKenzie located the snake, captured it,and took it to a local veterinarian. They scanned the conspicuously bulging belly and got a ping off the cat’s microchip. Yep, swallowed whole.

Last fall, Sydney’s Cascades Estate residential complex in Silverdale was on a big snake alert. A shed skin from a very large boa constrictor was found at a construction site. Government officials from New South Wales issued an alert to citizens.

The South American snake, which grows to an average of 3 meters, is illegal to keep in Australia outside of zoos. They can kill people and animals by strangulation.

Hang on, though. If Aussie construction workers are anything like the devilish ones here in the U.S., this might just be a grand prank to spook media or a co-worker who is deathly afraid of snakes. A photo apparently accompanied the buzz and was clipped from a Twitter account.

The careful draping of the unbroken skin suggests a prank. In addition, whole snake skins and sheds kept moist are notorious for being able to be stretched before drying. If tacked down well, after drying the stretch becomes permanent. Carnivals and circuses have featured enormous snake skins as an attraction. Some far exceeded anything ever found in the wild.

Cleo lived (past tense) in a pond by his house. To the man’s surprise, Cleo wasn’t in the pond when he got there. She was being dragged up a sidewall of the pond in the fangs of a very large spider.

The culprit was a member of the nursery web spider family. They are semiaquatic arachnids that can walk on still water, dive to avoid predators and even capture fish many times their size with their strong fangs and powerful venom.

A guy in Tempe, Ariz., outfitted a van with tiny treadmills, too narrow for a human. Ideally, he or his team pull up to your house and you bring your pooches for a run on the treadmills. He calls the service, RunBuddy Mobile LLC, and of course there is a website, an app, Facebook, Twitter, Instagram and multiple ways to book appointments.

To his credit, founder David Lopez conceptualized the service more than 13 years prior. And yes, one can consider a franchise. The website says to those interested, “Please send your resume along with any inquiries to info@runbuddymobile.com with the subject line ‘employment’ or ‘franchise interest.’ We are always looking for insane and incredible dog people to spread our mission for healthy, happy dogs through fitness!”

Tagline for the service is, “We run dogs!”

Recall we said treadmills, plural. Yep, a bunch of neighborhood client dogs or your whole pack can work out in his climate-controlled van at the same time.

Might I suggest, Mr. Lopez, you consider drop-down flat screens streaming Dog TV and a background music subscription for a reggae channel, the genre preferred by dogs.

Charlie Powell is the public information officer for the Washington State University College of Veterinary Medicine, which provides this column as a community service. For questions or concerns about animals you’d like to read about, email cpowell@vetmed.wsu.edu.