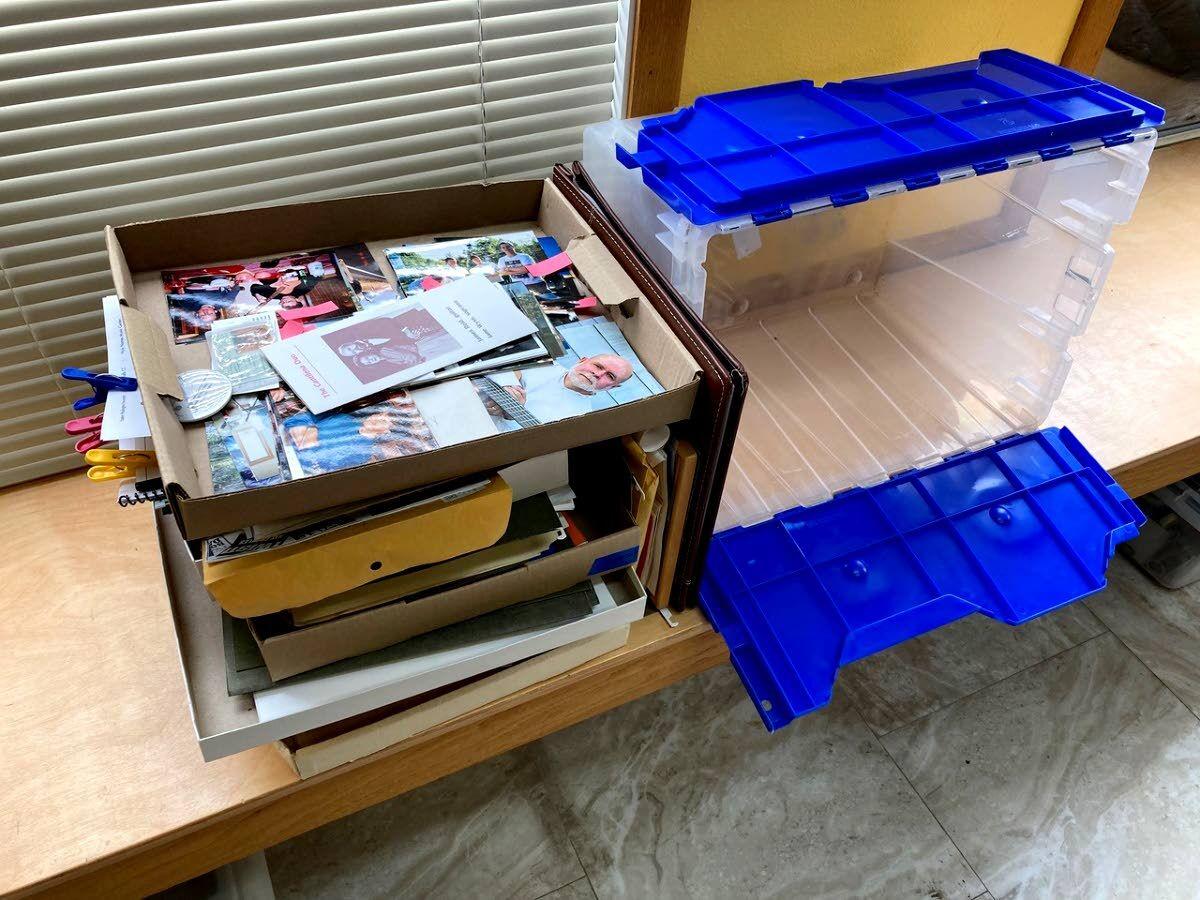 Jeanne Leffingwell photoThe good news? The author’s raw material for her husband’s photo album is in one spot. The bad news? The author neglected to take note of where she left off with the project.

Jeanne Leffingwell photoThe good news? The author’s raw material for her husband’s photo album is in one spot. The bad news? The author neglected to take note of where she left off with the project.

Lightening up, organizing, or downsizing without moving or dying has been my theme for quite a while now. Sometimes, as described in a previous column, the reward for getting one project accomplished is getting to do a different one. But I’m afraid the flip side of that is using one project as a way to avoid another one.

For several years I’ve been wishing I could get a handle on our family archives: photos, journals, papers, my mom’s archives and my deceased uncle’s World War II writings. I know that many people have used this COVID-19 time to conquer lots of this kind of work, and I must stop and give myself some credit too. I’ve been plugging away at it in fits and starts for quite a while. I’ve actually broken down what is for me a truly gargantuan project into sensible-seeming portions and I’ve gotten some parts of it done. But it’s just such a big job, and there is still far too much that I don’t want to leave behind for our kids to deal with. (Has anybody heard of Swedish Death Cleaning?)

Some people can just toss family history stuff out without much problem. Or digitalize everything and then toss it to save space. Great idea if it works for you.

But I just can’t, and don’t want to anyway. I suspect some of my readers are kindred spirits. But whether or not you’re among them you might hang in with me anyway, as I’m about to share a far-reaching cautionary tale.

Yes, there are photos I plan to digitize from prints, either to share or safeguard, along with a few digital photos that I’ll print out. My career as family documentarian and conservator of printed snapshots conveniently wound down about the same time the digital revolution was gearing up.

But whatever the starting point, I currently just want to downsize and create one or two personal albums for each child. And maybe 2 or 3 more to sit and enjoy now with my husband, or later, in the proverbial rocking chair. Or while listening to members of a younger generation point and giggle while turning pages. I don’t need one more damn thing to hunt for inside a computer, or tablet or phone and then try to peer over someone else’s shoulder to “share.”

Actually, a couple years ago, I put together some favorite photos from 10 visits in as many years to the same town in Mexico. I had them made into a slick hardbound book. My very own “decade book” which I took with me on my 11th winter visit and asked friends to autograph. There was a steep learning curve to get the book prepared (and it sure wasn’t cheap) but the results were wonderful and fun.

So, taking a step back from that lofty goal, the last time I was into this project, with piles spread out all over the trusty ping pong table, I was trying to put together a special album for my husband, to honor his retirement. From what started as a huge tub of various papers, photos, concert programs, fan letters and other items I’d volunteered to be the keeper of, I’d started making considerable progress sorting, deciding and condensing what remained into some logical order.

What happened next was I had to temporarily gather it all up to make room for a more time-sensitive endeavor. And I broke one of, if not the most important, cardinal rules: never gather things up temporarily (especially if it’s anything to do with archives) without spelling out exactly where you left off. Write down a brief description, or make a next-to-do list, or even a checked-off list of what you’ve already accomplished or best yet, all three. It’s like remembering to take a map or plugging your destination into your phone or laying out a trail of gingerbread crumbs so you can find your way back through a teeming metropolis or the deep dark forest. Am I mixing up my fables?

At any rate, I didn’t do it. I thought I was being careful enough, setting papers and photos in crisscrossed stacks, onto bankers’ box lids, with an additional tray or two each of “not sure yet” and “miscellaneous.” Then I stacked the trays and set them all to one side, just for a day or two. Mistake!

I don’t think I even need to say what has happened. I have no idea where I left off. And I’ve been putting off even spreading things out to look. But that’s where I’m headed right now, after I finish this column. Unless some other project gets in my way.

I promise to report back.

Jeanne Leffingwell is inspired that others out there are accomplishing long overdue domestic tasks and would love to hear about others’ challenges and insights. She hopes you all stay healthy. Reach her at jleffingwell4@gmail.com.