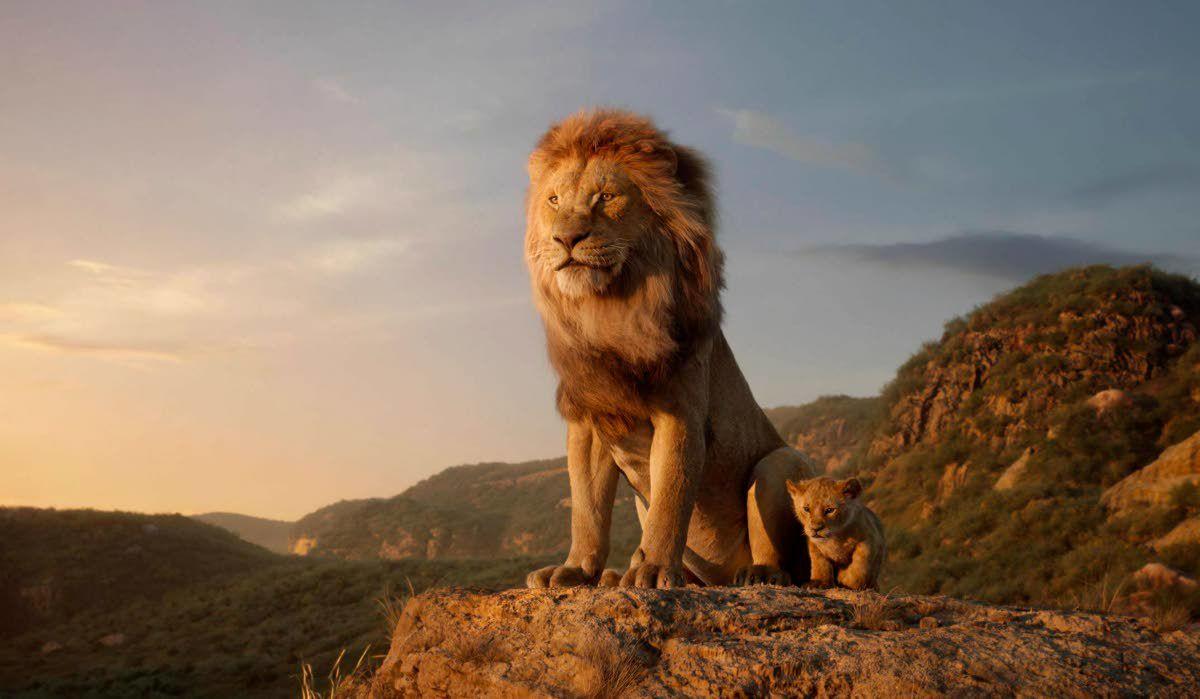 This image released by Disney shows characters, from left, Mufasa, voiced by James Earl Jones; and young Simba, voiced by JD McCrary, in a scene from “The Lion King.”

This image released by Lucasfilm shows droids BB-8, left, and D-O in a scene from "Star Wars: The Rise of Skywalker." (Lucasfilm via AP) 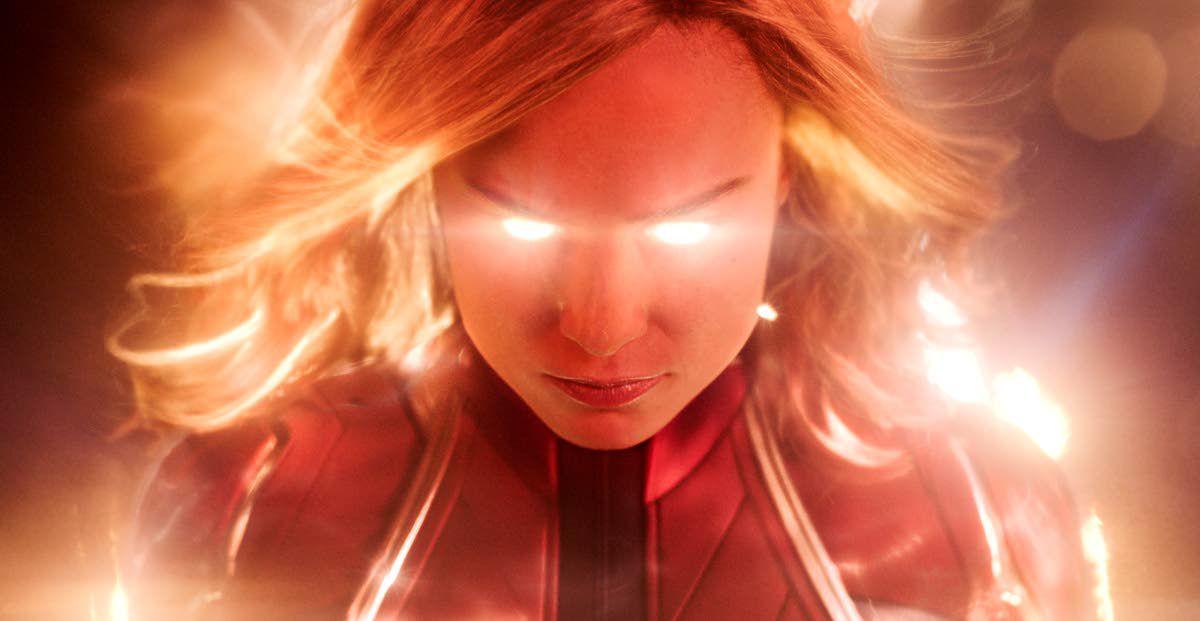 This image released by Disney shows Elsa, voiced by Idina Menzel, from left, Anna, voiced by Kristen Bell, Kristoff, voiced by Jonathan Groff and Sven in a scene from the animated film, "Frozen 2." (Disney via AP)

This image released by Disney shows, foreground from left, Buzz Lightyear, voiced by Tim Allen, Woody, voiced by Tom Hanks and Bo Peep, voiced by Annie Potts in a scene from "Toy Story 4."(Disney/Pixar via AP) 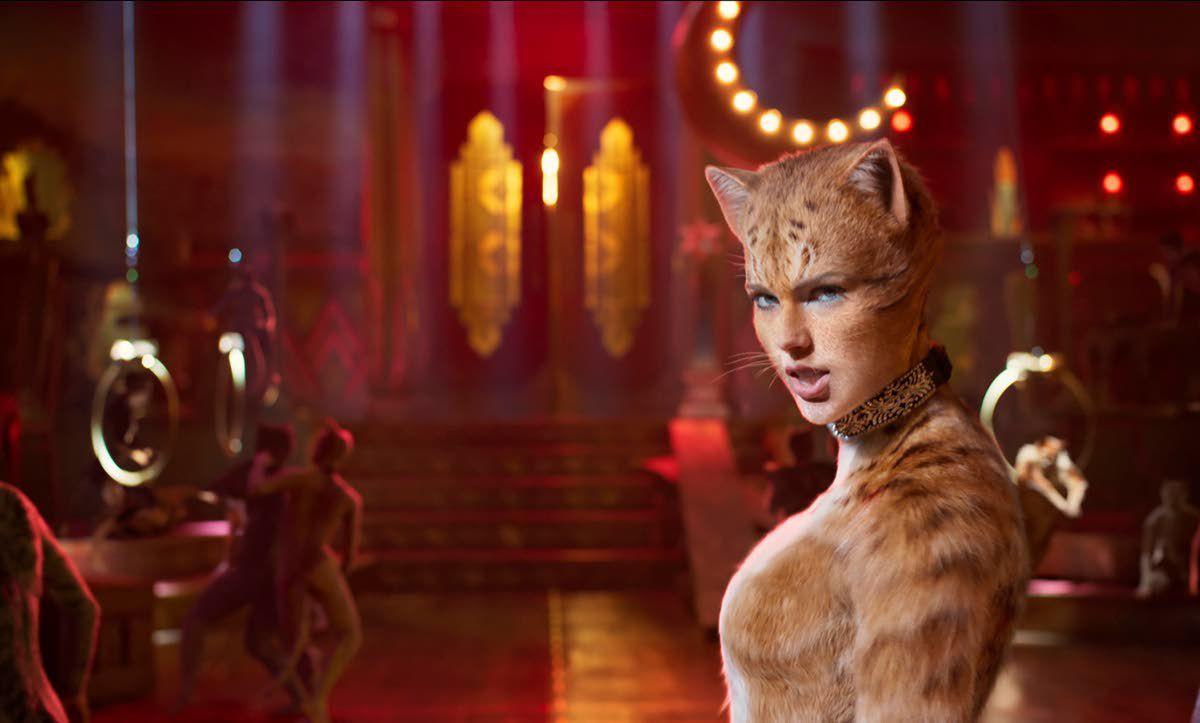 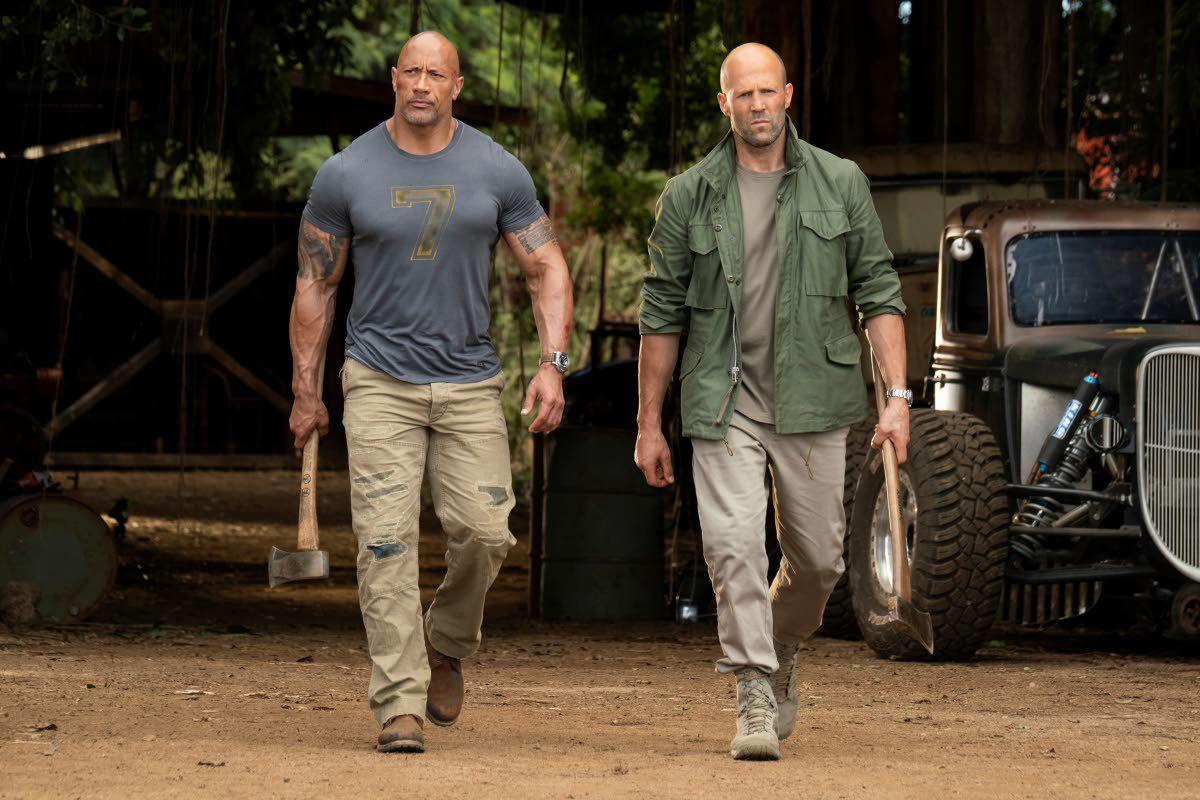 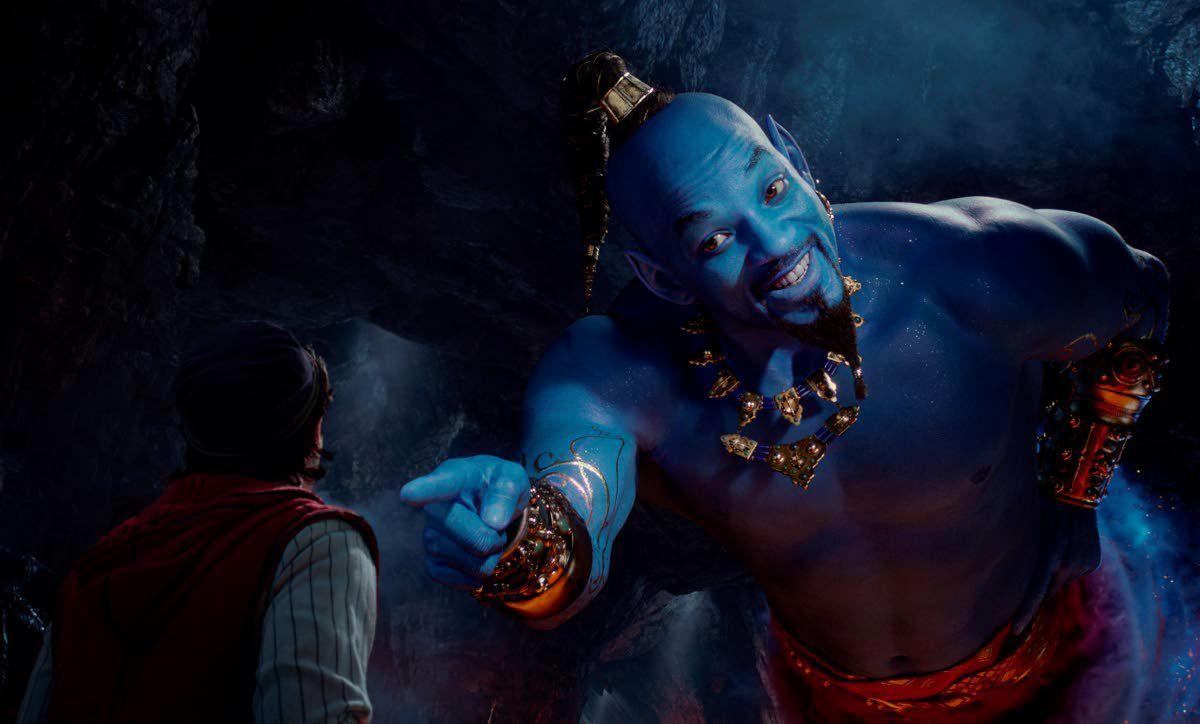 This image released by Disney shows Mena Massoud as Aladdin, left, and Will Smith as Genie in Disney's live-action adaptation of the 1992 animated classic "Aladdin." (Disney via AP)

This image released by Disney shows characters, from left, Mufasa, voiced by James Earl Jones; and young Simba, voiced by JD McCrary, in a scene from “The Lion King.”

This image released by Lucasfilm shows droids BB-8, left, and D-O in a scene from "Star Wars: The Rise of Skywalker." (Lucasfilm via AP)

This image released by Disney shows Elsa, voiced by Idina Menzel, from left, Anna, voiced by Kristen Bell, Kristoff, voiced by Jonathan Groff and Sven in a scene from the animated film, "Frozen 2." (Disney via AP)

This image released by Disney shows, foreground from left, Buzz Lightyear, voiced by Tim Allen, Woody, voiced by Tom Hanks and Bo Peep, voiced by Annie Potts in a scene from "Toy Story 4."(Disney/Pixar via AP)

This image released by Disney shows Mena Massoud as Aladdin, left, and Will Smith as Genie in Disney's live-action adaptation of the 1992 animated classic "Aladdin." (Disney via AP)

NEW YORK — Every movie year offers up a parade of hits and flops. But in 2019, no winner was in the same galaxy as the Walt Disney Co. And the biggest loser might have been anyone less than thrilled about the box-office domination of franchise films.

When the year closed out Tuesday, the top 10 films in U.S. and Canada theaters will all be intellectual property-backed movies. That, in itself, isn’t new. It’s the third year in a row that the year’s 10 biggest ticket-sellers have all been sequels, remakes and superhero films.

But in today’s IP-driven movie world, one studio is in a league of its own. In 2019, Disney dominated American moviegoing more than any studio ever has before — roughly 38 percent of all domestic moviegoing.

The year’s top five films were all Disney movies, and it played a hand in the sixth. Disney’s Marvel Studios produced the Sony Pictures release “Spider-Man: Far From Home.”

Disney banked about $13 billion in worldwide box office in 2019, including a record number of $1 billion releases. Once “Star Wars: The Rise of Skywalker” ($724.8 million through Sunday) inevitably reaches that milestone, it will mark the studio’s seventh such $1 billion movie in 2019. The others were: “Avengers: Endgame” (the highest grossing release ever, not accounting for inflation, with $2.8 billion), “The Lion King,” “Captain Marvel,” “Aladdin,” “Toy Story 4” and “Frozen II.”

Disney’s unprecedented market share includes films from 20th Century Fox, the 84-year-old studio that Disney gobbled up in March in a $71.3 billion acquisition.

Despite Disney’s considerable firepower, overall ticket sales in U.S. and Canada theaters were down 4.4 percent from the year before through Sunday, according to data firm Comscore. The upper echelons of the box office may be stratospheric, but the lower realms — where critics’ scores are rotten and word of mouth is faster than opening weekend — are dismal. The movies are increasingly a zero-sum game. You’re either “The Lion King” or you’re “Cats.”

“There’s plenty of capacity to bring people to the movie screen,” says Cathleen Taff, distribution chief for Disney. “What I think we’re doing is competing for their time. If it’s not great, they do have other options. But when it is great, people show up. And we’ve seen that this year with seven $1 billion movies.”

Disney’s considerable role in today’s moviegoing hasn’t been without critics. They have lamented its mega-blockbusters as products, not cinema. Before Martin Scorsese’s criticisms of Disney’s Marvel movies sparked headlines, he lamented the monopolizing of the multiplex, disturbed by the sight of “Avengers: Endgame” playing on 11 of a theater’s 12 screens.

If the big-screen experience is narrowing, the small screen is expanding. Streaming services proliferated in 2019 with the launch of Apple TV Plus (although it pushed back its first big movie release ) and Disney Plus. Amazon also reshaped its release strategy, shortening the theatrical window for some of its movies to just two weeks. Netflix rolled out its most ambitious release slate, including a host of awards contenders, led by Scorsese’s “The Irishman” and Noah Baumbach’s “Marriage Story,” that played in only limited theaters. The so-called streaming wars will only grow in 2020 when NBCUniversal launches its service, Peacock, and WarnerMedia debuts HBO Max.

While some may see a downturn in ticket sales as indicative of streaming’s impact, John Fithian, the president and chief executive of the National Association of Theater Owners, believes streaming is disruptive to broadcast TV, cable and home markets like DVDs, but not to movie theaters.

“This may sound counter-intuitive, but with the launch of Disney-Plus, HBO Max and Peacock, we’re more confident of the symbiotic relationship of streaming and theatrical than we were before,” says Fithian. “The people who stream also go to the movies a lot.”

Disney, Universal and Warner Bros. also remain devoted to the traditional theatrical window. Netflix will soon be competing with studios that can offer both a robust theatrical release and a streaming life — albeit not one with the same number of viewers at home that Netflix can promise.

Those services have certainly added pressure to the theatrical release, and quite a few in 2019 weren’t up to the challenge. The year’s most glaring bombs included bold bids at technological innovation ( “Gemini Man” ), mishandled franchise finales (“Dark Phoenix”), remakes that failed to connect (“Charlie’s Angels”), prestige dramas doomed by controversy ( “Richard Jewell” ), toy movies that didn’t click (“Playmobil: The Movie”) and, you know, “Cats.”

But some Hollywood executives point to successes suggesting a vibrant medium. Jordan Peele’s “Us,” for Universal, was the highest grossing original movie. Others like Lionsgate’s “Knives Out,” Fox’s “Ford v Ferrari,” STX’s “Hustlers” and Sony’s “Once Upon a Time ... in Hollywood” were also both critical and global hits. Bong Joon Ho’s “Parasite” and Lulu Wang’s “The Farewell” gave the art house a boost.

“I don’t think that the four-to-five percent drop means the domestic audience wants to stay home on the couch. I think it’s just like everything else in this industry since it began: We have cycles,” says Jim Orr, distribution chief for Universal. “Generally, the box-office is still trending up and I think that will continue over time, especially because you can do films like ‘Us’ and films like (the R-rated comedy) ‘Good Boys’ and people will still come out in force.”

Last year’s box office, which followed a two-decade low in 2017, set a record with $11.9 billion in ticket sales. Disney, the market leader for the last five years, again led the way with “Black Panther,” “Avengers: Infinity War” and “Incredibles 2.”

Revenues have largely been on the rise thanks to increasing ticket prices. 2019’s estimated $11.4 billion in ticket sales rank second all time, not accounting for inflation. But admissions have been gradually declining since 2005.

Overseas business, however, is booming. International box office for the first time crossed $30 billion in 2019. Either next year or in 2021, China will likely surpass North America as the world’s top movie market.

Lately, homegrown movies have been China’s top draws. This year, only two U.S. productions — “Avengers: Endgame” and “Fast and Furious: Hobbs and Shaw” — cracked the country’s top 10 films. A pair of Chinese blockbusters led the way, each with about $700 million in box office: the science fiction adventure “The Wandering Earth” and the animated fantasy “Ne Zha.”

All of these factors — a rare alignment of Disney juggernauts, expanding home-entertainment options, a more inward-looking China — mean a potentially dimmer outlook for 2020. Many in the industry expect the year’s ticket sales to drop of a few percentage points again. No one forecasts a similar year from Disney. The studio will still have a strong slate but one without an “Avengers” or “Star Wars” movie.

“2020 is going to be a more typical year, where the wealth will be spread quite a bit more,” says Paul Dergarabedian, senior media analyst for Comscore. “The sky is not falling but we’re definitely going to have to change our expectations for 2020. It’s not going to be just about one studio dominating but it’s going to be about all the studios bringing some of their biggest brands.”

James Bond, Wonder Woman and The Rock are coming in 2020. But greater volatility may be on the way, too.