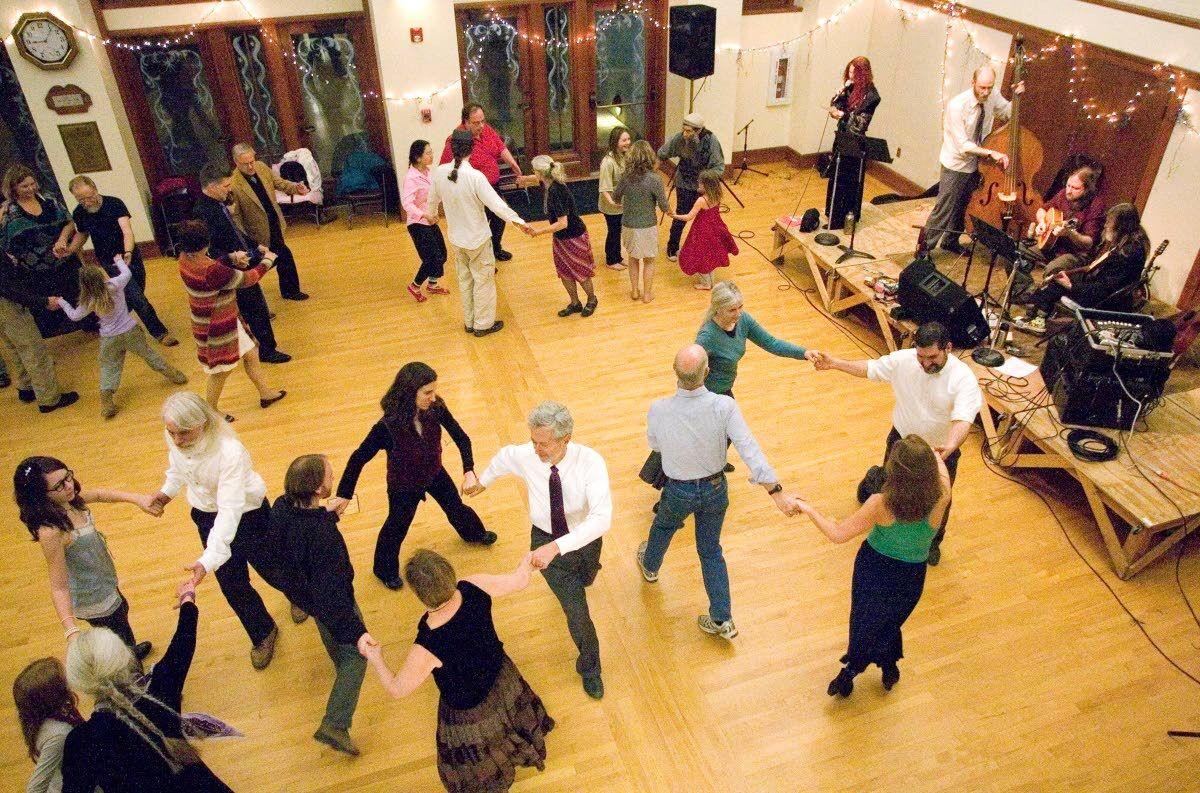 Members of the Palouse Folklore Society ring in 2012 during a contra dance that year at the 1912 Center in Moscow. 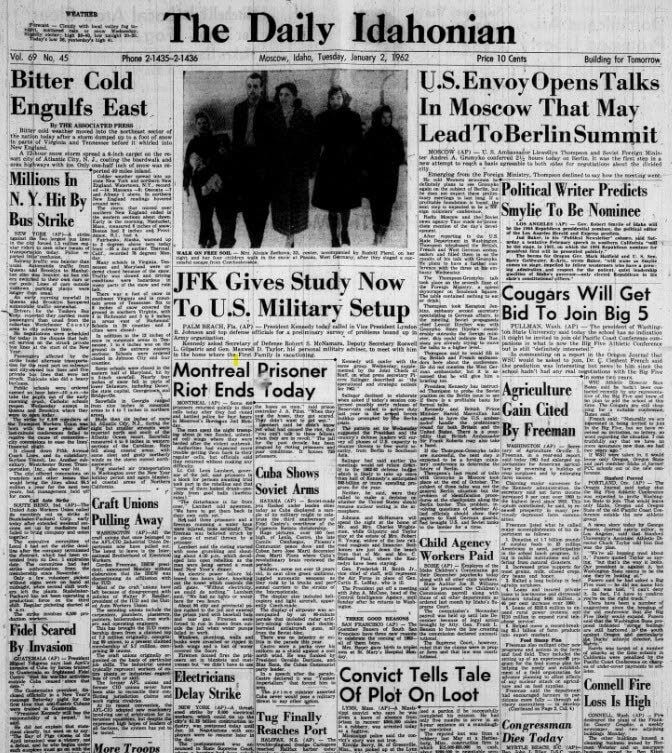 The cover of Jan. 2, 1962, copy of The Daily Idahonian (the precursor to the Moscow-Pullman Daily News) included 18 headlines, just one of them local, a story about Washington State University joining the Big Five Athletic Conference.University of Idaho Special Collections

The temperature in Moscow on New Years Day in 1952 was a downright chilly minus-19 degrees.

Six news stories landed "above the fold" in The University Argonaut the first week of 1922. A story about a University of Idaho alumni stag event in Lewiston included a note about how women of the faculty entertained the crowd with a puppet show and served refreshments. 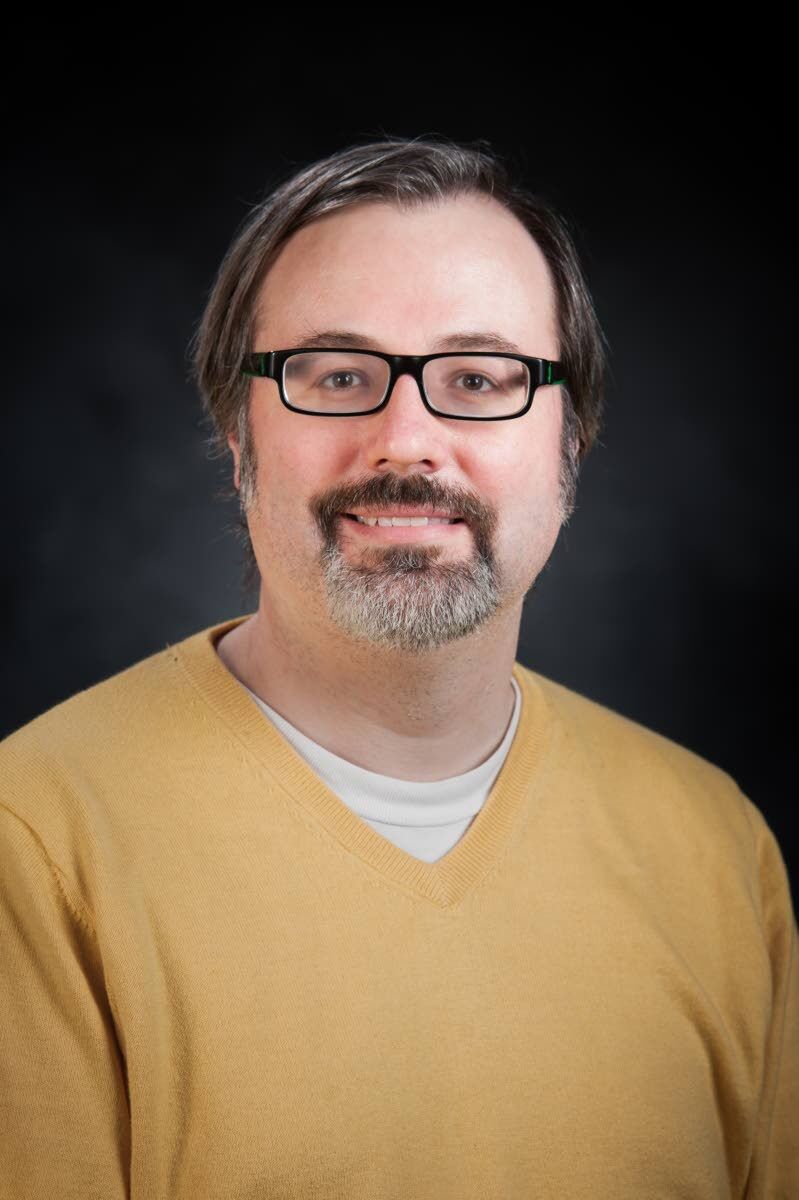 Members of the Palouse Folklore Society ring in 2012 during a contra dance that year at the 1912 Center in Moscow.

The cover of Jan. 2, 1962, copy of The Daily Idahonian (the precursor to the Moscow-Pullman Daily News) included 18 headlines, just one of them local, a story about Washington State University joining the Big Five Athletic Conference.University of Idaho Special Collections

The temperature in Moscow on New Years Day in 1952 was a downright chilly minus-19 degrees.

Six news stories landed "above the fold" in The University Argonaut the first week of 1922. A story about a University of Idaho alumni stag event in Lewiston included a note about how women of the faculty entertained the crowd with a puppet show and served refreshments.

Most people spend New Year’s Day looking forward to the coming year. Working in the University of Idaho’s Special Collections and Archives, I can’t help but look back.

Diving into our microfilm collection (which includes the Moscow-Pullman Daily news), our digital collection of The Argonaut and the database America’s News (all of which are available to anyone who comes by the UI Library) I took a look at the first issue of the local papers for each decade counting back from 2022. (So, 2012, 2002 and so on.)

The headline in the Moscow-Pullman Daily News was “People of the Palouse plan to be healthier, happier in 2012.” The article noted that weight loss was a popular goal. We were also “Dancing in the New Year” at the 1912 Center. There was the small matter of a fire that destroyed two vehicles and damaged an apartment building at 1125 Valley Road. The Argonaut was writing about indigenous enrollments, or “Native Numbers,” and the closure of two Vandal Store branches.

The Moscow-Pullman Daily News tells us the Gladish Community Center had just begun plans for a pedestrian bridge. Latah County was planning a 15,000-square-foot expansion to the courthouse. The state legislature was struggling to find facilities funding for public schools. Washington State University had just won the Sun Bowl. The Argonaut noted that students were “flocking to new courses about Sept. 11, terrorism.”

The newly christened Moscow-Pullman Daily News opined about the desire for public transportation between Moscow and Pullman. Whitman County passed a parking ordinance specifically to remove a green car that had been parked in the courthouse parking lot for three continuous years. The Argonaut featured a picture of students lining up to buy their textbooks in person, likening the scene to Soviet bread lines. Governor Andrus was promoting a five point plan for education, including putting computers in classrooms to make them “future friendly” and establishing before and after-school enrichment programs.

The Daily Idahonian features a picture of people cross country skiing down Third Street in Moscow. Due to Federal budget cuts, Latah County was losing a building code inspector and a program to develop city parks. The Argonaut featured a picture of a “perplexed UI student” trying to sign up for a computer science class, in person. Many university departments were worried about how to manage unexpectedly high enrollment.

The top headline in the Daily Idahonian was that bombing in Vietnam was delayed by bad weather. At the same time President Nixon was promising more troop withdrawals and hinting at a re-election campaign. In The Argonaut, the cover story was a proposal to eliminate the grade F and replace it with a designation of No Credit. Law students were being assessed a new fee of $100 a semester to fund the construction of a new Law School building. Down at the bottom of the front page was a small notice that undergraduates could no longer defer being drafted.

The Daily Idahonian assures us that “Fidel [Castro] scared by Invasion.” In Montreal there was a 400-person prison riot. On the Palouse, WSU was hopeful of joining the Big 5 Athletic Conference. The Argonaut reports “Idaho to Host Music Confab.” Jazz Fest was still five years away, but it is hard not to see this as the beginning. The UI purchased the Nest and the adjoining properties. And perhaps most striking of all, the Administration Building clock stopped!

It was 19 degrees below zero in Moscow, according to the Daily Idahonian. Hundreds of cars were stranded on snow-packed US 40 just outside of Salt Lake City. The UN was negotiating POW exchanges between the US and Korea. The Argonaut gleefully notes that 1952 is a Leap Year, meaning, in the customs of the time, that women could propose marriage to men. Moreso, if a woman proposes to a man, he has to either accept the proposal or purchase an expensive garment for the woman. This was a completely real phenomenon. The UI campus was also holding a “Cowpokes Ball” and workshops were held so students could learn how to be a “well-dressed cowboy.”

The Daily Idahonian tells us that, at home, farm appropriations are being cut, while abroad the battle for Manila was now on “in force.” There was also significant fear of Japan bombing the U.S., stated in terms we wouldn’t use today. At UI, an International News Service Bureau Head was giving a talk that would reveal the “inside dope” on the ongoing world war. ASUI planned to flood the tennis courts to make ice skating rinks. The runway at the Moscow-Pullman airport was being extended 100 feet.

The Daily Star-Mirror opined that the blanket of snow across the Pacific Northwest guaranteed “bounteous yields.” In world news, Turkey had just become military allies with Italy. In the midst of the Great Depression, The Argonaut declares that “Students Must Sacrifice Something for Education,” advising that paying for a college education is more important than personal savings. UI announces its football schedule, with only one of five games being played in Moscow.

The Daily Star-Mirror tells us that “Moonshine Causes Death and Injuries.” Senator William Borah was speaking out against the Allied Forces as aggressors in Europe. The Argonaut trumpets “Glee Club Tour Half Completed.” They performed 37 times across Idaho and Montana and were apparently always greeted by full houses. In Lewiston there was an Alumni Stag at the Majestic Café. Perhaps most amazingly, “Women of Faculty Entertain With Puppet Show – Serve Refreshments.”

It may seem like we are living through especially challenging times in 2022, but a look back can give us some perspective and some hope. The University of Idaho’s Special Collections and Archives are always ready to help you visit our shared past. Feel free to contact us at libspec@uidaho.edu or (208) 885-0845.

Perret is the special collection librarian at the University of Idaho.