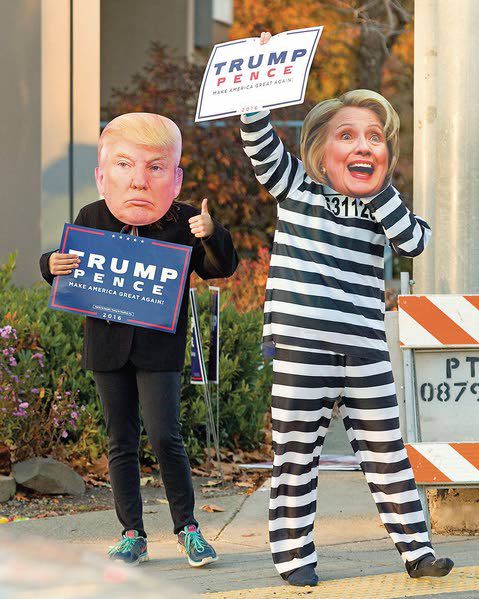 Abby Rasmussen, left, and Reagan Dollemore, both of Orofino, campaign for Donald Trump at the intersection of Third and Jackson streets Wednesday in Moscow. Rasmussen and Dollemore were campaigning with Leeann Callear, who is the vice-chair of the Idaho Trump campaign.

Whether the next president is Donald Trump or Hillary Clinton, the nation will be witness to many firsts.

Katherine Aiken, University of Idaho professor of history, discussed many of the election's historical implications Wednesday during a League of Women Voters of Moscow meeting at the 1912 Center in Moscow.

"It's such an amazing election and it's been so, shall we say, controversial that I think a lot of the things that are important in terms of a historical context have kind of fallen by the wayside," Aiken said.

Aiken said the United States has never seen someone as wealthy as Trump run for president. She said Trump would also be the first president elected with no military or significant political experience, and he would be the oldest first-term commander in chief in the history of the country.

As for Clinton, Aiken said, she made history in 2008 when she became the first woman to win a presidential primary.

"We forget how phenomenal her candidacy is from a historical standpoint," Aiken said.

Aiken said she never thought a woman would be president, even when she was a young and dedicated feminist.

"If somebody had told me that the wife of a former president would run for president I would have told them that they were out of their mind," Aiken said. "That's just not what happens in American history and that can't happen."

"Let's try to think about that," Aiken said. "He was the most powerful person in the world for eight years. He ran this country, so now what do you do with him?"

Regardless of the winner, Aiken said, the election will be revolutionary.

"It is literally a place that we've never been before and we don't exactly know how to deal with it, and I think that's why it's created such angst," Aiken said.

Besides Trump and Clinton, there have already been historical happenings in the presidential race.

"That's a first and that's pretty amazing in a lot of contexts," she said.

She said Sen. Bernie Sanders, D-Vermont, was the first Jewish person to mount such a major challenge in a presidential race.

"Even 50 years ago if we had said a Jewish-American was going to win a primary vote in the United States of America people would have laughed at us," Aiken said.