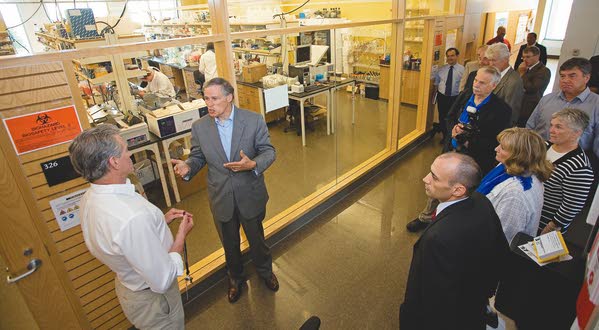 Washington Gov. Jay Inslee, second from left, asks Guy Palmer, left, a question during a tour of the Paul G. Allen School for Global Animal Health on the Washington State University campus Monday in Pullman. Palmer is the director of the Allen School. 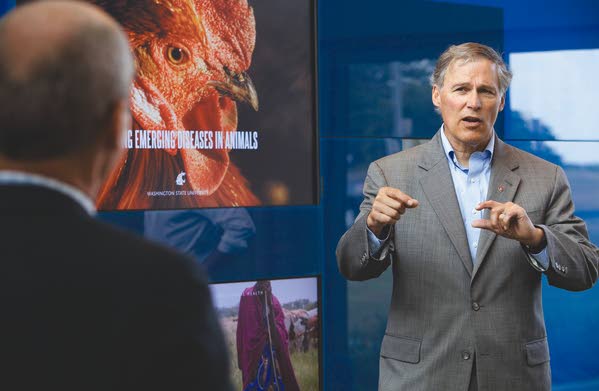 Washington Gov. Jay Inslee, right, directs a question to Tim Baszler, left, a professor at the Washington State University College of Veterinary Medicine and the director of the Washington Animal Disease Diagnostic Laboratory, during a tour of the Paul G. Allen School for Global Animal Health on Monday, July 8, 2013, in Pullman.

Washington Gov. Jay Inslee, second from left, asks Guy Palmer, left, a question during a tour of the Paul G. Allen School for Global Animal Health on the Washington State University campus Monday in Pullman. Palmer is the director of the Allen School.

Washington Gov. Jay Inslee, right, directs a question to Tim Baszler, left, a professor at the Washington State University College of Veterinary Medicine and the director of the Washington Animal Disease Diagnostic Laboratory, during a tour of the Paul G. Allen School for Global Animal Health on Monday, July 8, 2013, in Pullman.

"These research facilities are so integral to our larger economic plans for growth in our state, and in order to continue the growth of agriculture in our state, these things are a huge value," Inslee said. "They're not just academic. They're an industrial concern."

The three-story, 62,000-square-foot Allen Center, which officially opened in September, houses laboratories and researchers aiming to diagnose and develop control measures for infectious diseases affecting humans and animals around the globe. The building and its researchers are the home base for the Paul G. Allen School for Global Animal Health, which is part of WSU's College of Veterinary Medicine.

Guy Palmer, director of the school, led the first part of the tour, which included an inside look at the new Biosafety Level 2 labs and the 5,000-square-foot Biosafety Level 3 lab. The BSL3 labs featured negative pressure air filtration systems, which maintain air flow in and out of the labs to prevent contaminants from getting in and pathogens from getting out. Air flowing out of the lab is filtered, as is any air recirculated into the lab.

While inside one of the BSL3 lab spaces, which was empty at the time of the tour, Palmer explained to the tour group that the Allen Center provides WSU researchers with surge capacity. In the case of a disease outbreak, like avian flu or foot-and-mouth disease, that means Allen Center researchers can quickly dedicate an entire floor to diagnostic and suppression efforts.

Inslee, Hover and Bonlender each asked several questions throughout the tour, many having to do with the facility's funding and opportunities for growth.

The Allen Center's construction was funded by donations from WSU alumnus Paul G. Allen, the Bill and Melinda Gates Foundation, many other donors and bonds issued by the state. The Allen Center employs 24 faculty members, with the goal of adding 10 more, said Charlie Powell, public information officer for the College of Veterinary Medicine.

Tim Baszler, WADDL director, and Palmer told the government officials they plan to expand the Allen Center by adding an additional wing, giving the facility a V-shape. Baszler said the addition would house new and updated WADDL facilities, replacing the current 35-year-old ones.

WSU requested $5.7 million from the state to begin the design phase for the new wing, but the funding was not granted in the recently approved 2013-2015 state operating budget, pushing the project back at least two years.

Baszler said having Inslee, Hover and Bonlender see firsthand why and what facilities need to be updated is an advantage.

"It helps for them to have a vision of what we need," Baszler said. "It's important for them to see how we help the agricultural industries and the animal industries in the whole region, not just Washington."

Hover, whom Inslee appointed in April, said the tour and information provided by Baszler and Palmer helped him understand what kind of a resource the Allen Center can be for him and Inslee in terms of agriculture, the animal industry, education and jobs.

"It was really important the WSDA take a more active role in seeing what can be done to find funding for this thing," Hover said.

Inslee said he wants to grow the capabilities of the Allen Center and said the facility's mission is an integral part of a statewide global animal health initiative. Inslee also commended WSU for its work at the Allen Center and its construction of the Biomedical and Health Sciences Building on its Spokane campus, to be completed in August.

"You're not only helping health," Inslee said of WSU's efforts. "You're helping the economy at the same time."

Bryan Slinker, dean of the College of Veterinary Medicine, said he was glad to show off the new Allen Center facility to Inslee.

"There's just a lot of things we do for the state, and we just tried to get those in front of him," Slinker said.

For several members of Monday's tour group, the visit to WSU was like a homecoming. Hover and Bonlender both earned bachelor's degrees from WSU, and Trudi Inslee said she attended WSU for two years from 1969 to 1971 before transferring to the University of Washington.

Meredith Metsker can be reached at (208) 883-4628, or by email to mmetsker@dnews.com. Follow her on Twitter at: @MeredithMetsker

Gov. Jay Inslee was on-hand Monday for a ceremony to commemorate the generation of 150,000 megawatts by the Palouse Wind Project.The 58 turbines spanning the Naff…