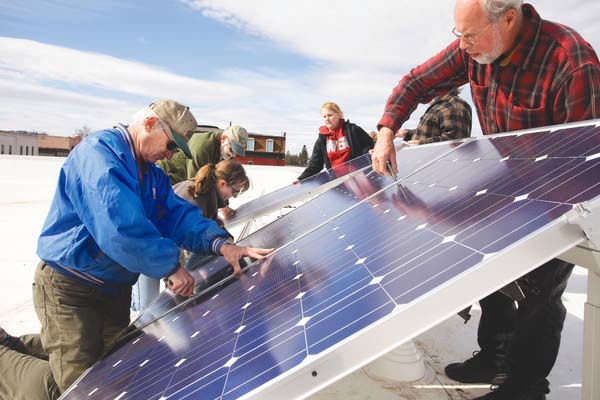 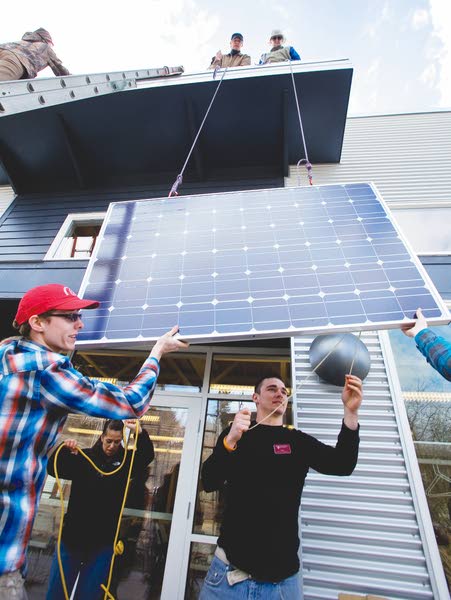 Brady Dier, bottom left, steadies the first solar panel while Nick Montanari, bottom right, attaches a rope so the panel can safely be hoisted atop the Palouse Community Center roof by Richard Wesson, top left, and Brian Clark during a volunteer work day to install the panels, Saturday, March 10, 2012.

Brady Dier, bottom left, steadies the first solar panel while Nick Montanari, bottom right, attaches a rope so the panel can safely be hoisted atop the Palouse Community Center roof by Richard Wesson, top left, and Brian Clark during a volunteer work day to install the panels, Saturday, March 10, 2012.

Mike Carlton's friends kept their promise Saturday of placing solar panels on the Palouse Community Center in honor of the former energy-conscious resident.

About $12,000 in donations were raised to place 10 solar panels on the roof of the community center by So Happy It's Tuesday, a renewable energy group Carlton had been a member of before his sudden death in 2010 from a metabolic brain injury. He had also been an employee with the Pullman Police Department.

"We decided to put up solar panels in his name," said Sharon Tharp, who serves on the group with her husband, Dave. "It's going to provide the energy that goes into the grid and then it helps reduce their electrical cost."

The group's efforts were made easier Saturday with the included labor of about 20 students from Washington State University participating in the fifth annual alternative spring break through the Center for Civic Engagement and Center for Sustainable Agriculture and Natural Resources.

"We are finding that a lot of students are really craving hands-on learning," said Lynne Carpenter-Boggs, bioagricultural research coordinator for WSU. "We also really want kids to get their hands dirty and make a physical difference."

This was Nick Montanari's third time leading community service projects through the Center for Civic Engagement, he said, and installing solar panels was a nice change from the typical tours of regional agricultural operations.

"This technological aspect of it was really cool," he said.

WSU senior Nate Bitz, who is majoring in organic agriculture and philosophy, said he can see a practical use for solar panels in his future as farming continues to evolve, blending low- and high-tech practices.

"This is my first time working with solar panels and it's definitely something I want on my farm someday," he said.

Dave Tharp led the charge throughout the process, instructing students and volunteers on every aspect of the project starting with building brackets to hold the rails to which the panels were attached. Students were forced to come up with ingenious ways to get supplies from the ground to the roof using ropes.

"This is a unique system because every solar panel is going to have its own microinverter," said Dave, which will allow people to log online and see in real time the amount of energy being collected and how that relates to the lifetime of the panels. He added each panel should produce about 240 watts of energy annually. "That's not a lot of energy when you think of things."

But using the money saved through energy costs and a 15-cent rebate for every kilowatt of energy generated from the solar panels will allow them the opportunity to look at adding more solar panels in the future for greater savings, he said. His group had aimed for $20,000 in funding for 20 panels, but decided to go with 10 this year as that was the amount they could afford.

Sharon said a meter will also be placed on the side of the building with plans for a memorial plaque crediting Carlton's contribution to renewable energy practices in Palouse. The Tharps have their own solar panels on their home, which they decided to install following an energy audit by Carlton - a side business of his - shortly before his death.

Later this month an electrician will come by to hook up the solar panels so the community building can begin seeing its energy savings.

"I just hope nobody else in our group kicks off because we're not doing this again," Sharon joked.