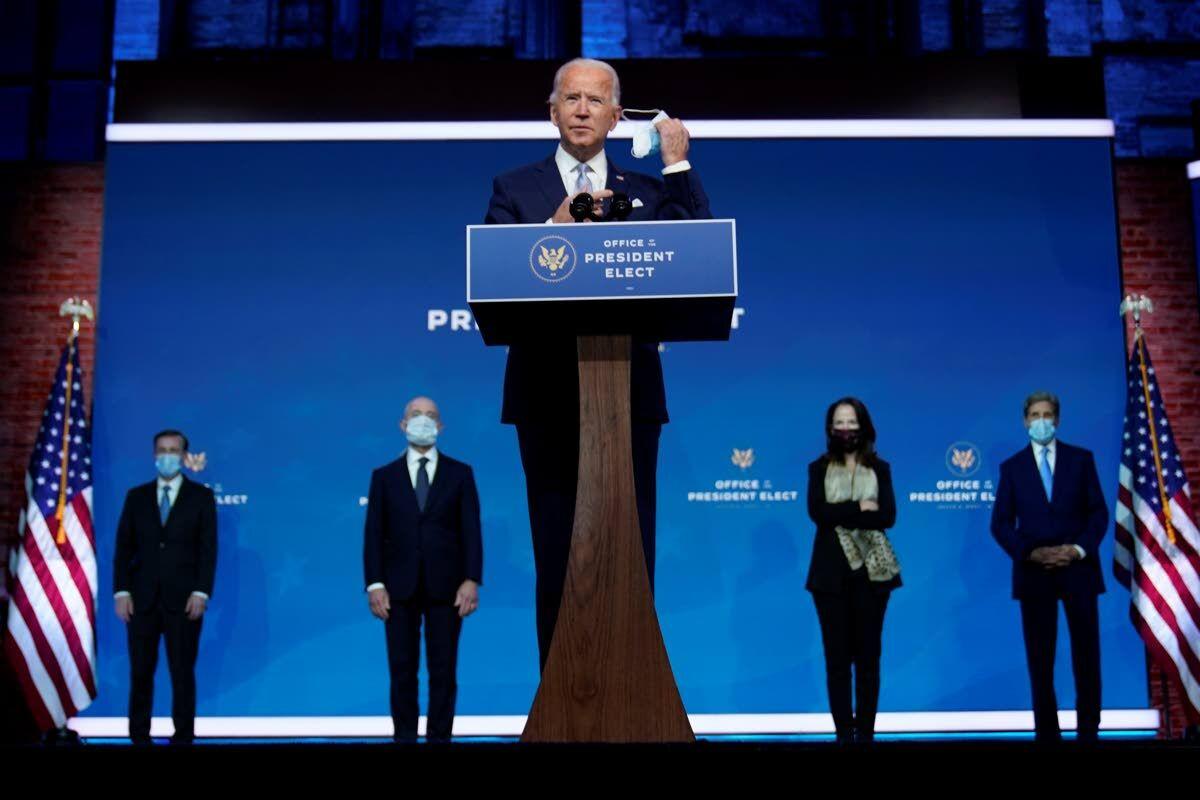 President-elect Joe Biden removes his face mask as he arrives to introduce his nominees and appointees to key national security and foreign policy posts at the Queen theater Tuesday in Wilmington, Del. 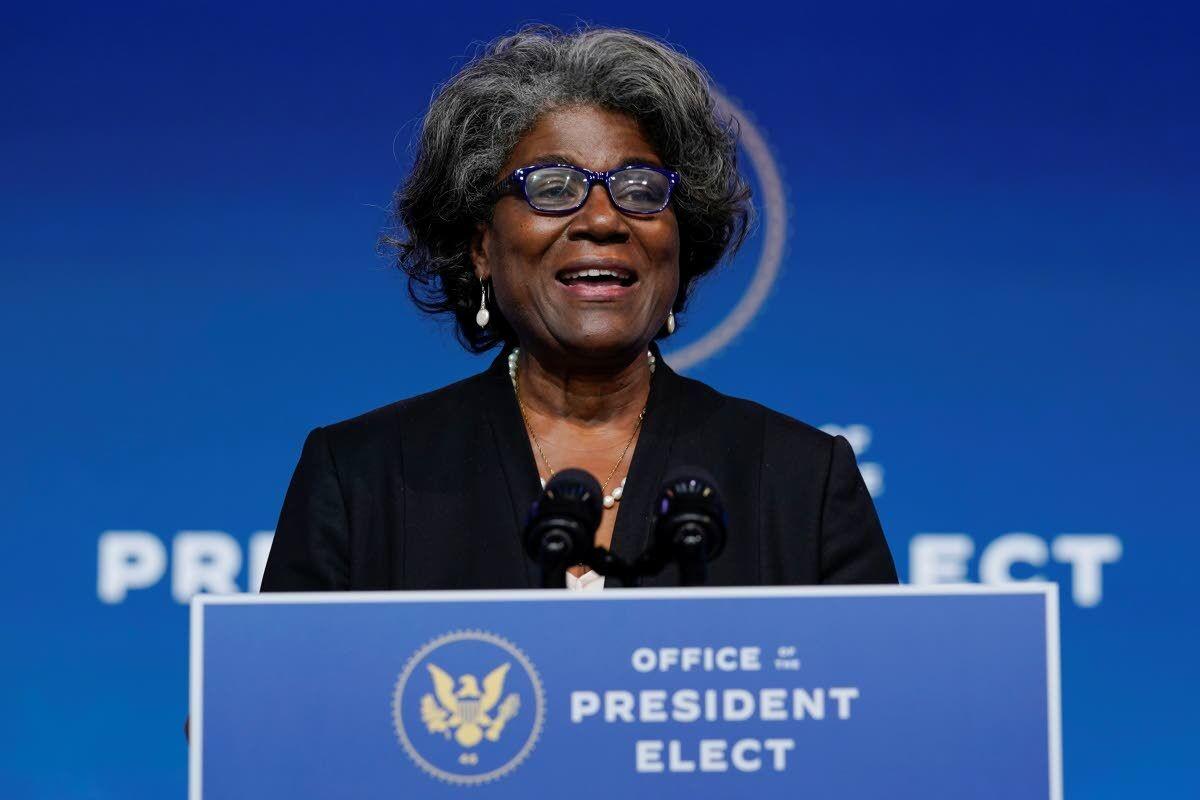 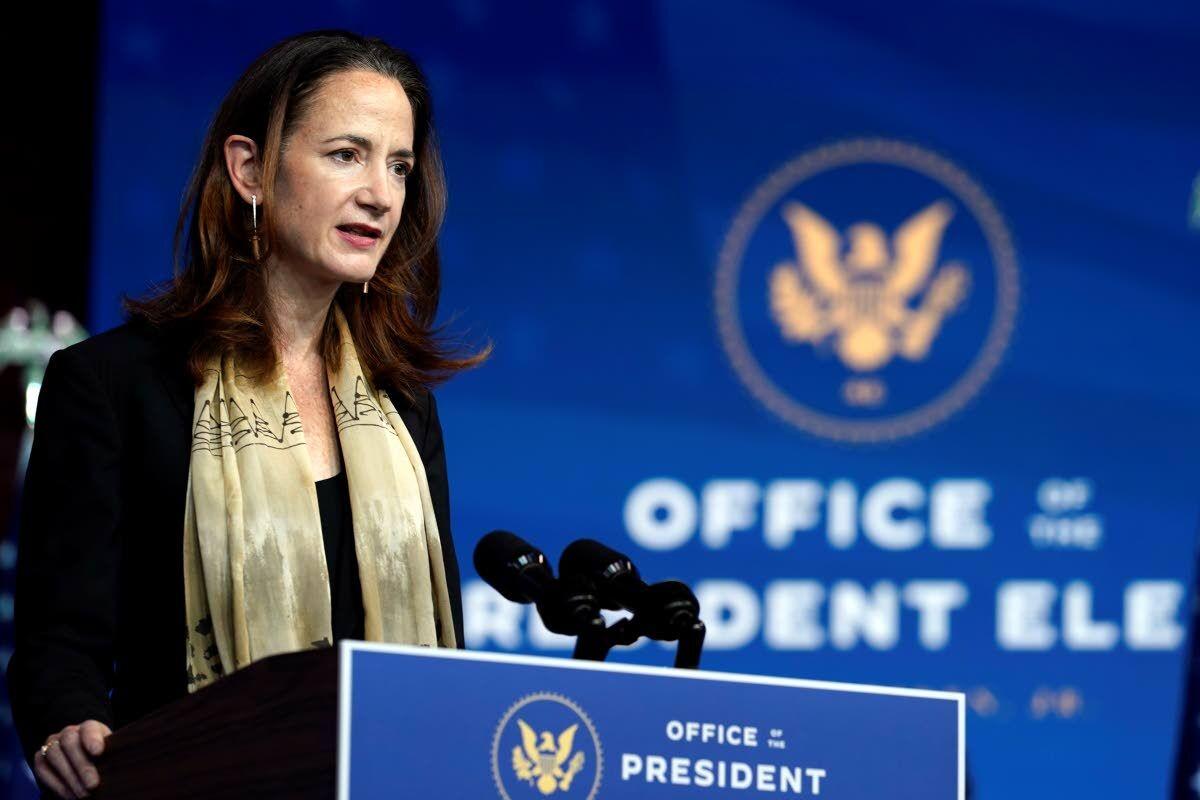 President-elect Joe Biden removes his face mask as he arrives to introduce his nominees and appointees to key national security and foreign policy posts at the Queen theater Tuesday in Wilmington, Del.

WILMINGTON, Del. — Declaring “America is back,” President-elect Joe Biden introduced his national security team Tuesday, his first substantive offering of how he’ll shift from Trump-era “America First” policies by relying on experts from the Democratic establishment to be some of his most important advisers.

“Together, these public servants will restore America globally, its global leadership and its moral leadership,” Biden said from a theater in his longtime home of Wilmington, Del. “It’s a team that reflects the fact that America is back, ready to lead the world, not retreat from it.”

The nominees are all Washington veterans with ties to former President Barack Obama’s administration, a sign of Biden’s effort to resume some form of normalcy after the tumult of President Donald Trump’s four years in office. There are risks to the approach as Republicans plan attacks and progressives fret that Biden is tapping some officials who were too cautious and incremental the last time they held power.

Still, Biden’s nominees were a clear departure from Trump, whose Cabinet has largely consisted of men, almost all of them white. Biden’s picks included several women and people of color, some of whom would break barriers if confirmed to their new positions.

They stood behind Biden and Vice President-elect Kamala Harris spaced apart and wearing masks to prevent the spread of the coronavirus, a contrast with Trump and many of his top aides who have largely eschewed facial coverings.

Avril Haines, a former deputy director of the CIA, was picked to serve as director of national intelligence, the first woman to hold that post, and former Secretary of State John Kerry will make a curtain call as a special envoy on climate change. Kerry and Sullivan’s position will not require Senate confirmation.

With the Senate’s balance of power hinging on two runoff races in Georgia that will be decided in January, some Senate Republicans have already expressed antipathy to Biden’s picks as little more than Obama world retreads.

Sen. Tom Cotton, an Arkansas Republican and potential 2024 presidential candidate, argued that Biden is surrounding himself with people who will go soft on China.

Biden said his choices “reflect the idea that we cannot meet these challenges with old thinking and unchanged habits.” He said he tasked them with reasserting global and moral leadership, a clear swipe at Trump, who has resisted many traditional foreign alliances.

The president-elect said he was “struck” by how world leaders have repeatedly told him during congratulatory calls that they look forward to the U.S. “reasserting its historic role as a global leader” under his administration.

Trump, who has debated recently whether to mount another presidential campaign in 2024, appeared to defend his worldview on Tuesday.

“We shouldn’t go away from that — America First,” he said at the annual turkey pardon, a lighthearted pre-Thanksgiving White House tradition.

While Trump expected total loyalty from his Cabinet and chafed at pushback from advisers, Biden said he expected advisers to tell me “what I need to know, not what I want to know.”

Further drawing a contrast with Trump, Haines said she accepted Biden’s nomination knowing that “you value the perspective of the intelligence community, and that you will do so even when what I have to say may be inconvenient or difficult.”

Haines said she has “never shied away from speaking truth to power” and added “that will be my charge as director of national intelligence.”

Biden celebrated the diversity of his picks, offering a particularly poignant tribute to Thomas-Greenfield. The eldest of eight children who grew up in segregated Louisiana, she was the first to graduate from high school and college in her family. The diplomat, in turn, said that with his selections, Biden is achieving much more than a changing of the guard.

“My fellow career diplomats and public servants around the world, I want to say to you, ‘America is back, multilateralism is back, diplomacy is back,’” Thomas-Greenfield said.

Mayorkas, who is Cuban American, also offered a nod to his immigrant upbringing.

“My father and mother brought me to this country to escape communism,” he said. “They cherished our democracy, and were intensely proud to become United States citizens, as was I.”

But Mayorkas might pose the most difficult confirmation challenge from Biden’s early round of nominees.

The Senate previously confirmed him in December 2013 by a party-line vote to be the deputy secretary of Homeland Security. The Senate was controlled by Democrats then, and all of the chamber’s Republicans voted against his confirmation mainly because he was then under investigation by the Obama-appointed inspector general in that department. At the time, the Senate historian’s office said it was unprecedented for the Senate to vote on a nominee who was under investigation.

The inspector general, John Roth, found in March 2015 that Mayorkas, as director of the U.S. Citizenship and Immigration Services, appeared to give special treatment to certain people as part of the visa program that gives residency preference to immigrants who agree to invest in the U.S. economy.

Meanwhile, there were signs Tuesday that the stalled formal transition of power is now underway. Biden’s team now is in contact with all federal agencies, according to a transition official who spoke on condition of anonymity to describe developments that have not been announced.

At the Pentagon, Kash Patel, chief of staff to the acting secretary of defense, is heading the department’s transition work. A transition task force has been assembled, led by Tom Muir, head of the Pentagon office that provides administrative and management services to all Defense Department facilities in the Washington area.

Muir said the first meeting with Biden’s team was held virtually Tuesday morning and that he expected daily meetings to come — some virtually and some in person. He said normal accommodations for the Biden team have been made, including provision of briefing materials, video-teleconferencing capabilities, and office space inside the Pentagon.

Health and Human Services Secretary Alex Azar also said his agency is working to get briefing materials to Biden’s aides immediately and pledged a “professional, cooperative and collaborative” transition.

The moves came a day after the head of the General Services Administration wrote the necessary letter of “ascertainment” acknowledging Biden as the apparent winner of the election, triggering the transition process.

Trump, who continues to press a legal challenge to overturn the election results, again on Tuesday refused to concede his election loss.

Trump tweeted that “the GSA does not determine who the next President of the United States will be.”