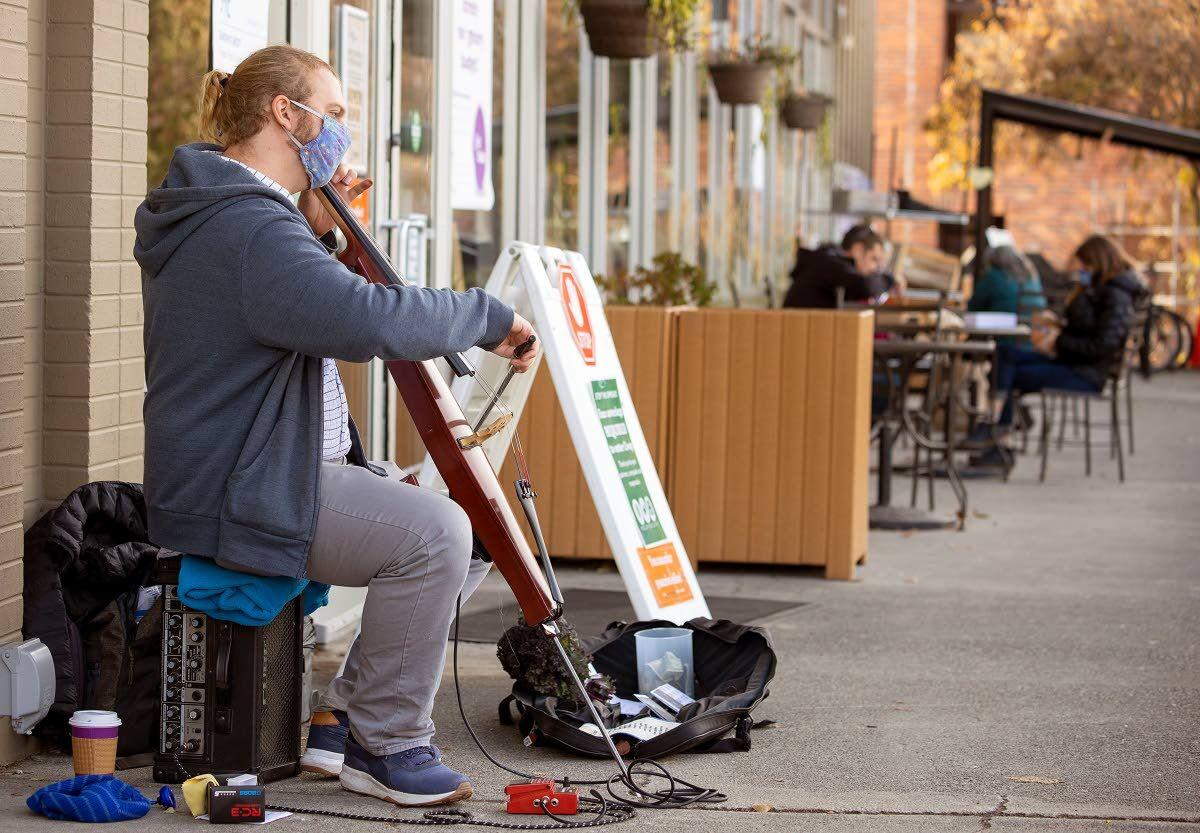 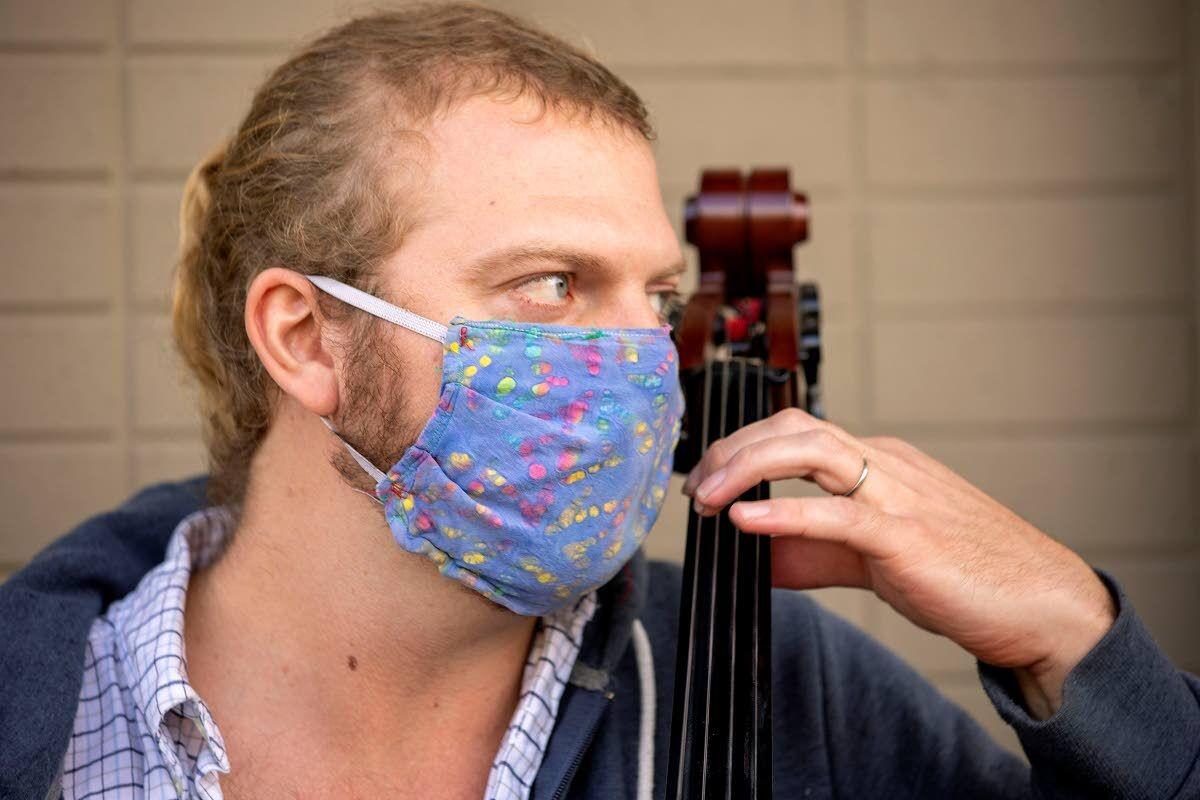 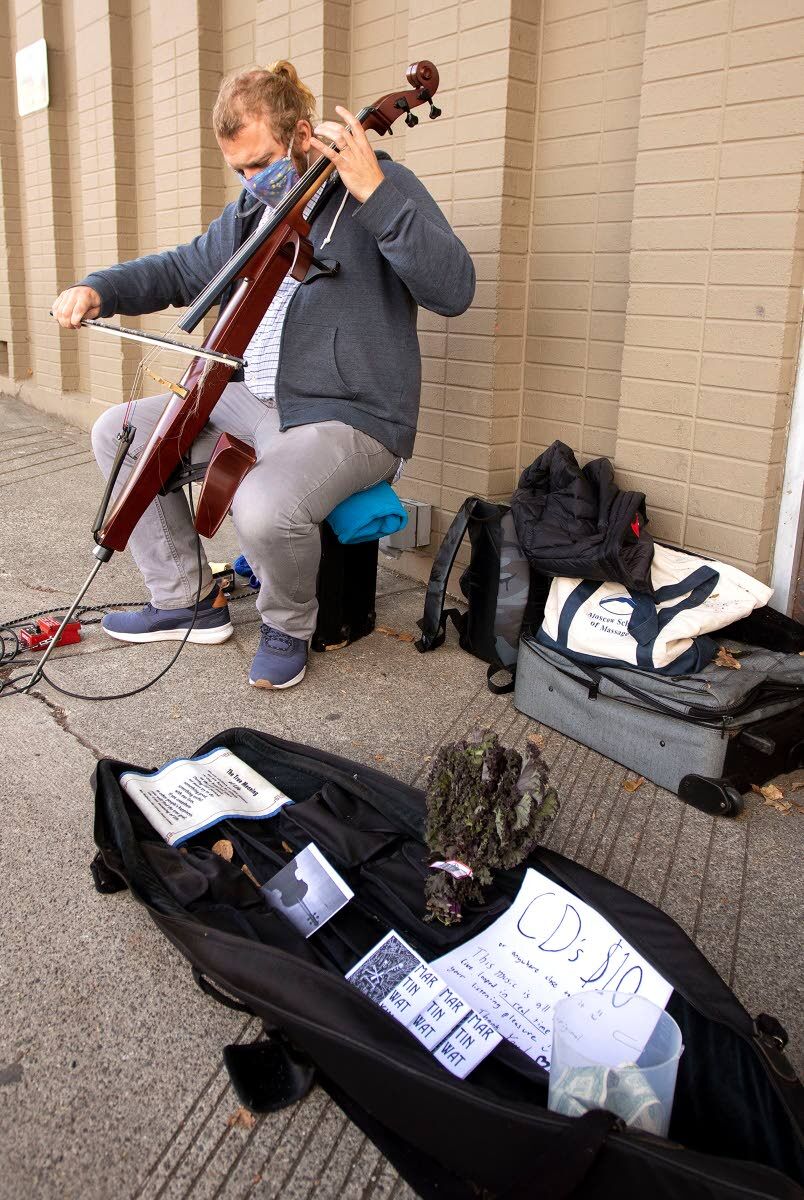 Those frequenting downtown Moscow may have been pleasantly surprised recently to hear notes from an electric cello reverberating through the streets.

The man behind those melodies is 31-year-old Martin Watkinson of Ashland, Ore., a lifelong cello player and musician.

Most days — weather permitting — the musician can be found brightening the days of others by shredding on his electric cello in front of the Moscow Food Co-op.

The location has special meaning to Watkinson.

“I grew up here and I used to work at the co-op. It’s always been an open-minded community forum, so it was my hunch that they would be supportive of the music,” he said. “I was right.”

Watkinson is the son of longtime Moscow residents Lisa O’Leary and John Watkinson, who are members of the Irish music band, Potatohead. He said being raised in a musical household paved the way for his decision to pursue the craft as a full-time venture.

“They had band practice every week, and I always enjoyed being around that,” he said.

Watkinson was exposed to music lessons at a very young age. His first foray into the world of music was at the ripe age of 3 when his parents enrolled him in a Waldorf-esque preschool called Giant Steps. Students at the school were allowed to choose between studying foreign languages, various instruments, rock-climbing and more.

“I initially chose violin, then I switched to cello because I wanted to sit down,” he said. “When I was about 10, I learned my first piece of Bach, and I fell in love with music from that point on.”

Fast forward 20 years, and Watkinson has released multiple albums with his band, Gaea, which has a sound he describes as “acoustic soul-funk rock.” Along with his cello, the band features vocals by his wife, Cherita Meadows, and percussion by his friend, Jackson Coffee.

Gaea made a name for itself in the Portland street music scene by drawing crowds at farmers markets and festival performances before Watkinson and Meadows moved to Ashland.

The band also recorded seven songs that are featured in the soundtrack for the 2016 documentary film, “SEED: The Untold Story.”

“It was a huge whistleblower on agriculture companies Monsanto and Syngenta,” Watkinson said in reference to the documentary. “It covers native tribes and seed banks that have been saving heirloom organic genetics.”

All of Watkinson’s performances are improvised — he said he sometimes returns to chord progressions or themes, but he never plays anything exactly the same way twice. His current busking setup consists of his electric cello, a looping pedal and a battery-powered stereo amplifier.

On average, he spends about 20 hours performing on the street year-round. He plans to stay in Moscow and keep performing through the holidays, at which point he will eventually return to his home in Ashland and continue performing there.

Local musicians like Josh Ritter, classics like The Beatles and alternative rock staples such as Radiohead are among the artists from whom Watkinson draws musical inspiration.

His biggest inspiration, however, isn’t quite old enough to release an album of her own.

“My wife gave birth to our beautiful baby girl, Pheonixx, six months ago,” he said. “She’s been a huge inspiration of light — the brightness of her soul and her amazing smile — so her existence has been profoundly inspiring.”

The cellist will play a release show for his recently-recorded solo album, “Songs for Earth,” at 6 p.m. on Nov. 28 at Hunga Dunga Brewing Company in Moscow. He said he looks forward to performing in a formal setting for the people he connects with via busking on the street.

When asked what his favorite thing about performing is, Watkinson said he’s always lived by the philosophy that music is medicine, because he believes it’s a good way to uplift others.

“I’ve always noticed that it’s a good way to spread positive intentions and uplift people,” he said. “It’s a really good medicine for me and it seems to be for people who hear it.

“There’s a lot you can process with music that you can’t with words, so it’s an extremely valuable tool for healing and self-expression.”

For more information on Gaea or to purchase the band’s music, visit gaeasoul.com/.

Ellen Dennis can be reached a