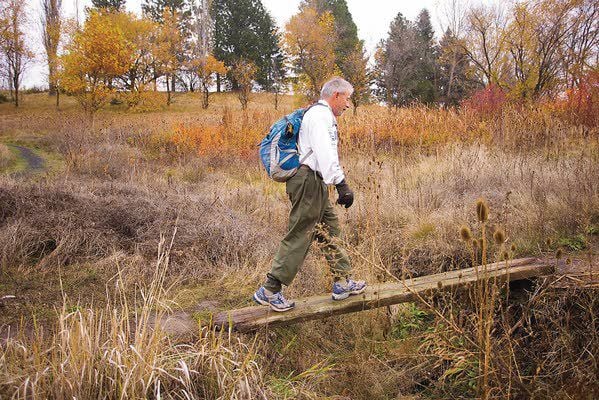 Scotty Cornelius walks on a path on the Dry Fork Creek Natural Area on his land Thursday in Pullman. The paths, which are open to the public, are on Crestview Drive west of Lincoln Middle School. 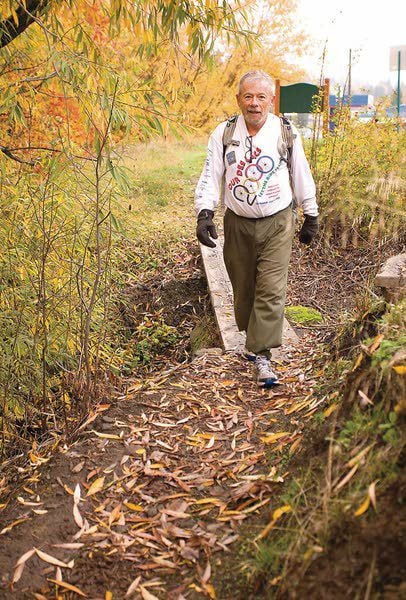 Cornelius walks on a path on the Dry Fork Creek Natural Area on his land on Thursday in Pullman.

Scotty Cornelius walks on a path on the Dry Fork Creek Natural Area on his land Thursday in Pullman. The paths, which are open to the public, are on Crestview Drive west of Lincoln Middle School.

Cornelius walks on a path on the Dry Fork Creek Natural Area on his land on Thursday in Pullman.

In an effort to encourage residents to experience nature and keep them from being sucked into their electronic devices, Scotty Cornelius, 72, is shoveling and chiseling out trails in Pullman's undeveloped pockets.

Cornelius and his wife, Diane Cornelius, purchased a 3.5-acre space to the west of Lincoln Middle School for about $90,000 last year and immediately started creating a network of trails for public use.

"If you can create pastoral, serene places in town, that's important to the ambience of the town," Cornelius said. "We have a lot of paved paths in Pullman, but we don't have enough primitive paths."

Because of that, he said, it's critical to create paths so residents are able to access and enjoy the streams and creeks that run through the city.

"I see kids here laying across here and looking into the water," Cornelius said, pointing to one of the many plank bridges that jumps the nearby creek and connects with the network of trails on the property. He said he received all the planks for the bridges from local farmer Doug Jacobson, who had removed them from a bridge near his farm.

While the trail helps keep the screens of this age's devices black, creating accessibility to Pullman's creeks and rivers was more of a driver for Cornelius.

He said he was influenced by Loretta Anawalt, a Pullman resident who died in 2007. Anawalt, he said, was instrumental in development of the Bill Chipman Trail, the Civic Trust Riverpark and check dam, the Pine Street Plaza and Downtown Riverwalk, a connection of approximately 27 miles of path in and around Pullman.

"She got me interested in how beneficial it is to have creeks and rivers running through town," Cornelius said. "She did a lot to enhance that and I began to appreciate what she's talking about ... it's very beneficial to Pullman that the rivers through our town can be beautiful and are an amenity for the town."

After spending a few days shoveling and chiseling out the one-quarter-mile-long trail into the hillside next to Lincoln Middle School, Cornelius said it doesn't take much in the way of time or money to keep the trail up.

He said he occasionally puts wood chips, which are provided for free by Pullman Parks and Recreation, down on the trails, and in the wetter months he lays gravel on the trails. He also does some occasional spraying of weeds.

In addition to his 3.5-acre park, Cornelius also helps keep up other trail networks in the city. His latest project is a bike park, which includes a dirt pump track and wooden ramps for middle school students, right off Southeast Crestview Drive. That project is a partnership between Cornelius and his friend Scott McBeath.

He said the trail is open to the public and it's not just for the children.

"The bike park is for their benefit," he said. "Hopefully they aren't texting while biking."