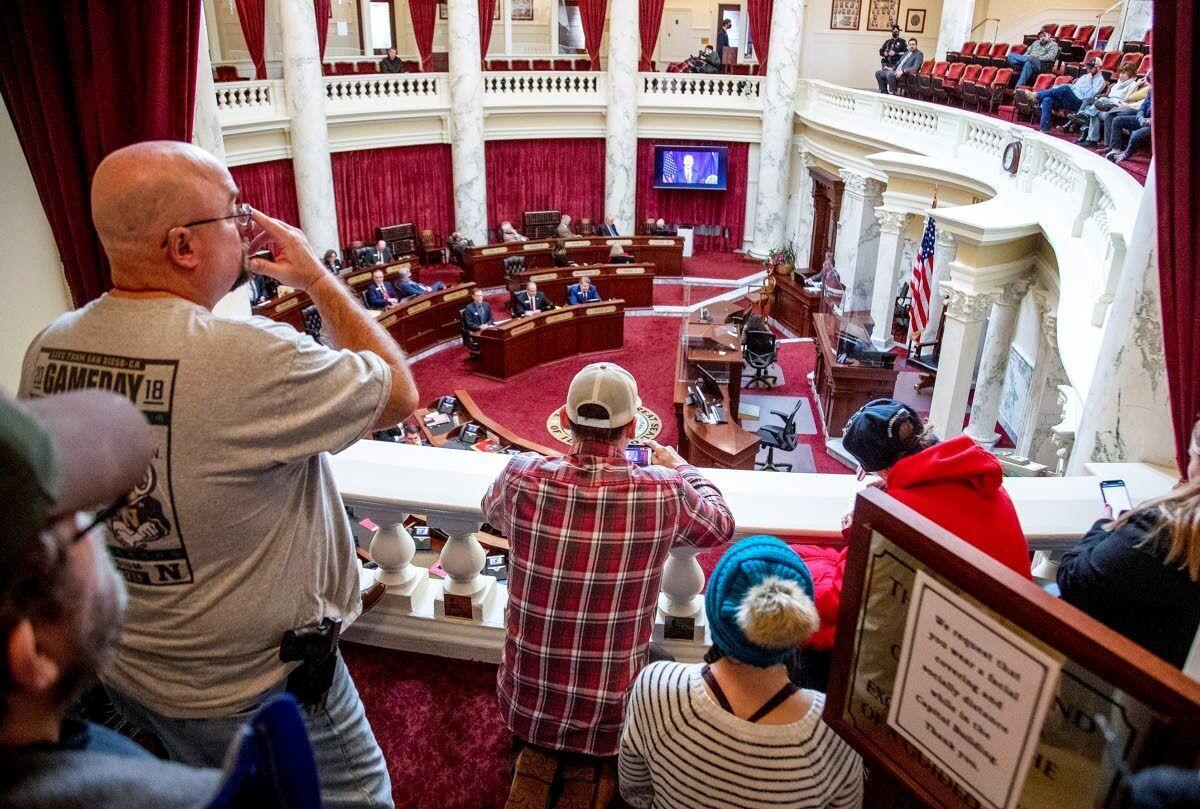 A group of onlookers, some from a “Peoples Rights” group that had been protesting earlier outside the Capitol building in Boise, watch Gov. Brad Little’s virtual State of the State Address from the Senate Chamber gallery Monday at the Statehouse. 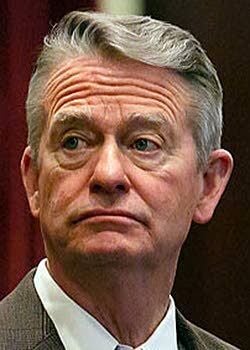 BOISE — Idaho Gov. Brad Little is proposing a mix of tax cuts and infrastructure investments to strengthen the state’s rebound from the coronavirus pandemic.

During his 2021 State of the State Address on Monday, Little said his “Building Idaho’s Future” plan will put money back in the pockets of hardworking Idahoans and propel the state forward.

“This would be among the single largest tax cuts in Idaho history,” Little said. “To get there, I’m proposing $295 million in one-time tax relief, and $160 million in permanent tax cuts to boost prosperity, while keeping our tax rates competitive and our business climate vibrant.”

Exactly what form any of the tax relief would take — whether it lowers income tax rates, eliminates the sales tax on food or emphasizes property tax relief — will be determined through conversations with the Legislature.

“Curbing government spending and returning taxpayer dollars should be the perpetual mission of public servants,” Little said. “I look forward to working with my partners in the Legislature to get tax relief across the finish line for our citizens.”

The governor’s State of the State serves as the traditional start of the annual legislative session.

In a nod to the ongoing coronavirus pandemic, Little delivered the address from a nearly empty Statehouse auditorium, rather than the over-crowded House chamber. It was broadcast to lawmakers in their respective chambers; there were also a number of spectators in the House and Senate galleries.

Little began the speech by condemning the protesters who stormed the U.S. Capitol last week.

“Former President George W. Bush aptly described the events as fitting of ‘a banana republic, not our democratic republic,’ ” he said. “The riots tarnished the shining values America stands for. This is not who we are. Hostility and violence are not an expression of your rights; they are a violation of everyone else’s.”

The governor also praised Idaho health care workers for their “heroic” efforts to combat the spread of COVID-19.

“The pandemic turned our work lives, social lives and home lives upside down,” Little said. “But the pandemic also reminds us that in troubled times, we have choices. We can choose compassion over conflict. Listening over lecturing. Humanity over hostility. These choices start with each of us individually, in our hearts.”

Additional details from the governor’s 2022 budget recommendation include:

The $295 million in one-time tax relief includes $115 million in assistance to businesses affected by the coronavirus pandemic. This would come from mirroring temporary changes in the federal tax code that Congress approved last year.

The remainder would come from the state tax relief fund, which collects sales tax revenue from online purchases. That fund is projected to have a balance of $180 million by the end of fiscal 2021.

The governor is proposing to obligate $105 million from the tax relief fund going forward, to pay for the bulk of the permanent tax cuts, he said. The remaining $55 million would come from “general growth in the economy.”

Adams said the governor sees the $160 in permanent tax relief as part of a “package deal” with his transportation funding proposal.

Little is recommending $126 million in one-time funding to address the backlog of transportation projects; it would be split 60-40 between the state and local highway systems.

He’s also recommending an ongoing, $80 million increase in transportation funding. At least half of that would have to come from higher fuel taxes or other user fees, Adams said. The other half could come from general fund revenues.

Little historically has rejected the use of general fund dollars for transportation, because it puts highways in director competition with public schools and other general government services for scarce tax dollars.

However, given the importance of the issue — and the Legislature’s historical resistance to higher user fees — he’s changed his tune.

Getting more money for roads and bridges “is very important to me,” Little said following his State of the State Address. “I want to get it across the finish line. I think this is a good compromise, and I think it’s something we can get done.”

“With all the disruptions in education delivery over the past 10 months, many Idaho students are experiencing a learning loss,” Little said. “We must close the achievement gap. ... We must ensure this school year is an anomaly — not a permanent, system-wide flaw for Idaho students in the next decade or more.”

The governor’s higher education budget calls for $315.2 million in state support, which would be an $8.1 million, 2.6 percent increase over the current year.

He’s also recommending $22.7 million for deferred maintenance projects, about half of which would go to higher education.

The Department of Health and Welfare would see a 5 percent, $45 million increase in state general fund support. That includes full funding for the traditional and expanded Medicaid programs.

However, faced with a significant, unexpected increase in utilization rates, the governor is proposing that Idaho counties contribute $12.5 million to offset the higher Medicaid costs.

The department itself is proposing another $30 million in cost-saving measures, including Medicaid benefit cuts, reductions in provider rates and higher tax assessments on nursing homes and intermediate care facilities.

The Legislature’s joint budget committee will begin considering the governor’s budget recommendations this week. Barring any changes because of the pandemic, it will start setting agency budgets in mid-February.