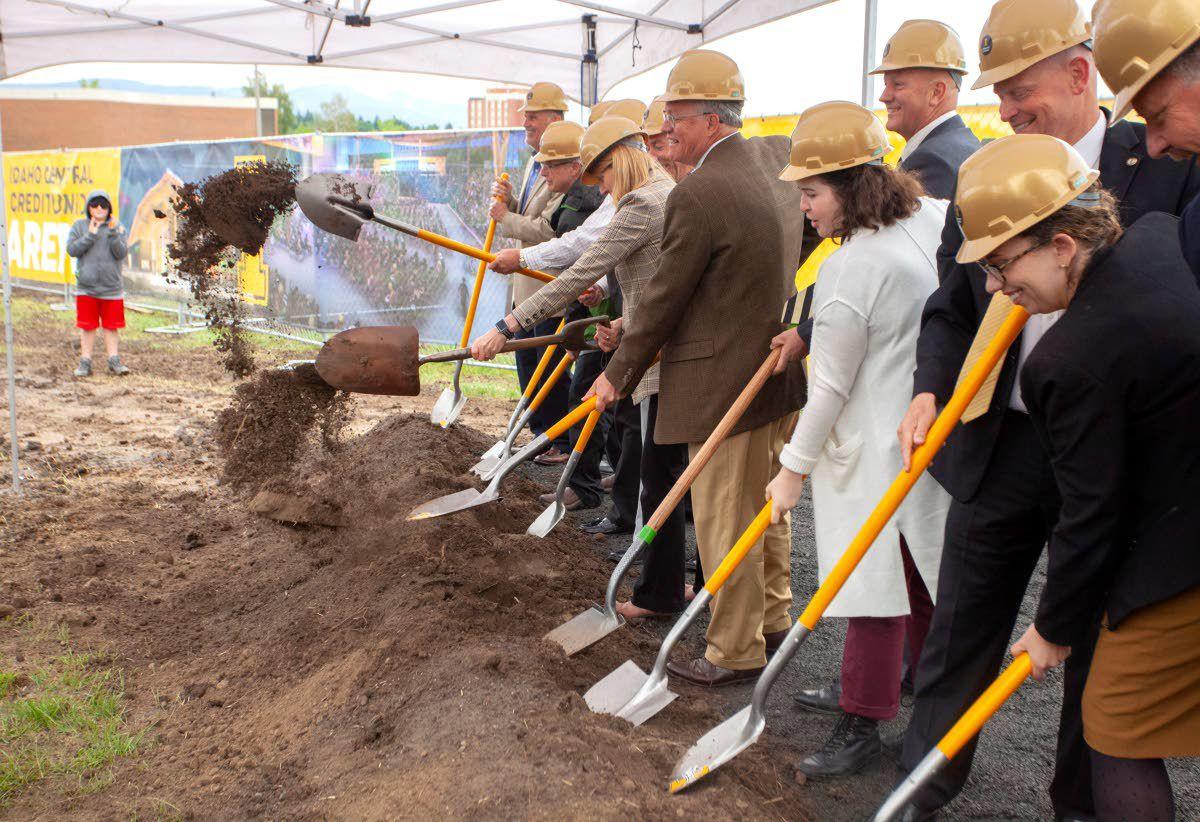 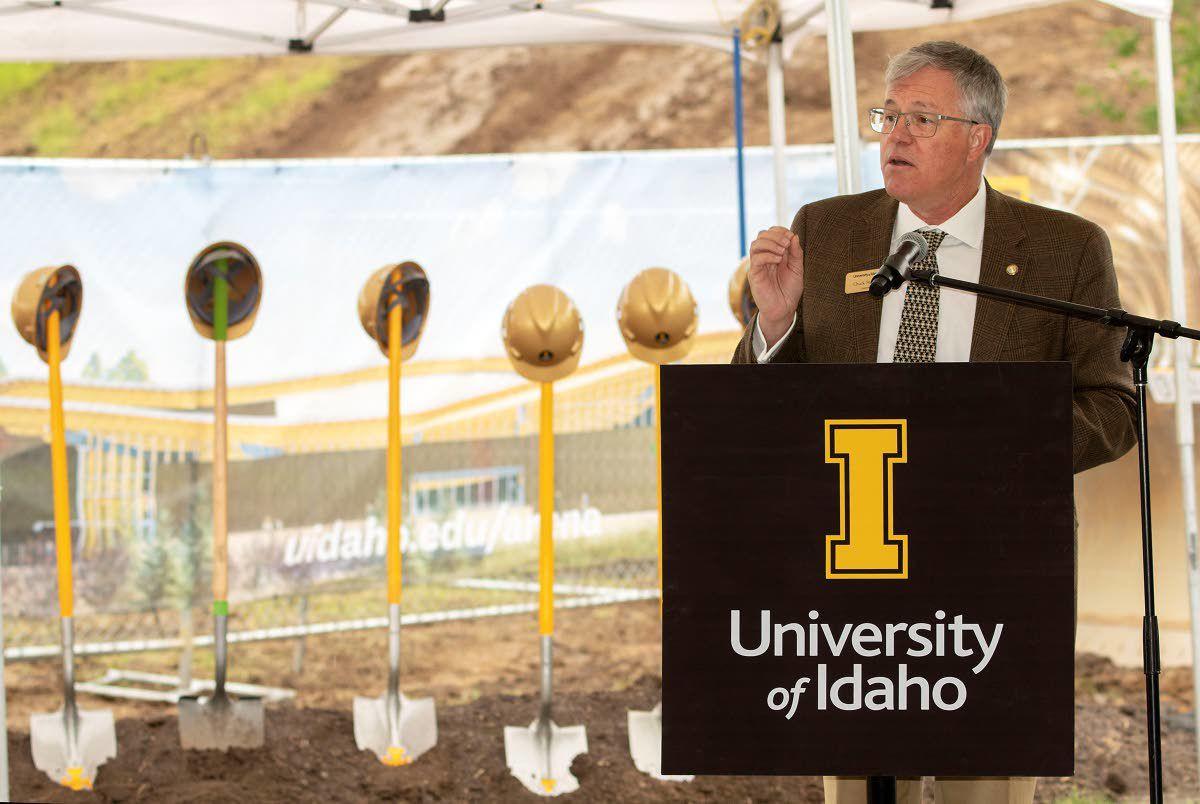 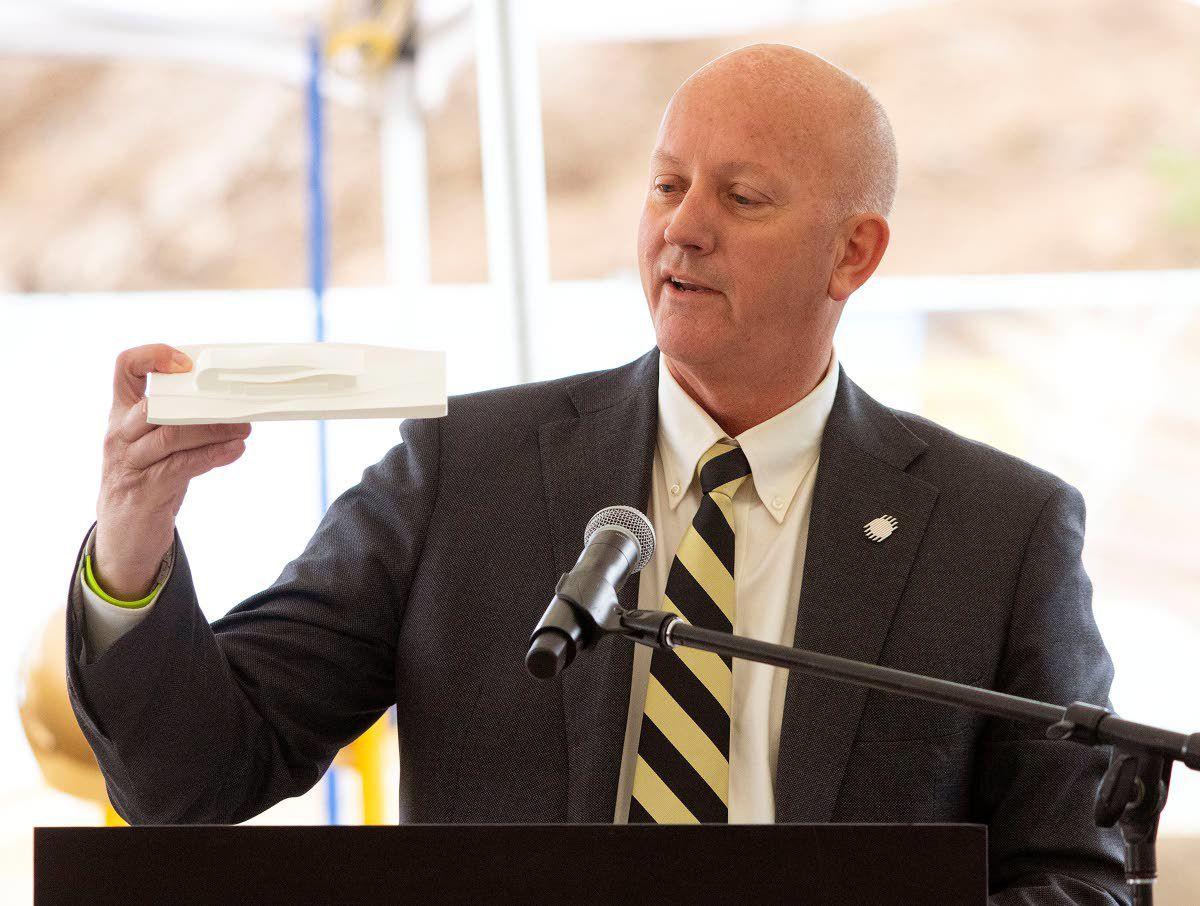 More than 90 years after Memorial Gym opened in 1928, the University of Idaho broke ground on a new basketball arena Thursday.

About 200 people were present under drizzly overcast skies to watch the shovels hit the dirt in celebration of an event that’s been on the UI docket for decades.

The $51 million Idaho Central Credit Union Arena will be built on the north side of the Kibbie Dome and is set to be completed by fall of 2021.

One of the dozen shovels used in the ceremony was the same one President Theodore Roosevelt used to plant a tree on campus in 1911, a UI official said.

“This is gonna be a game-changer for athletics,” UI interim athletic director Pete Isakson said. “We’re going to have the best facility in the Big Sky Conference. We’re going to be able to recruit to this like no other place we’ve been and we’re going to have an environment like you’ve never seen.”

Isakson said Idaho has raised $43 million of the $51 million needed for the project with private donations. He said fundraising is ongoing, but some of the project could be funded with government bonds.

“For the most part, everything we’re doing now is going to be donations,” Isakson said. “But we will probably end up bonding the end of it, whether that will be $3 million, $4 million or $5 million, we will just have to wait until we get there.”

Isakson said a $10 million donation from Idaho Central Credit Union was paramount for the project.

The mostly wood facility will be the first of its kind in college athletics, said Vicki Christiansen, the chief of the U.S. Forest Service, who was on hand for the event.

“U of I, you’re already out front,” Christiansen said.

The 62,000-square-foot arena will have a capacity of 4,200 and will be built almost entirely of Idaho-grown wood.

“If you look at this building there’s nothing like this across the country,” added Dennis Becker, dean of the UI College of Natural Resources, “so this isn’t only a model for Idaho, this is really a model for the entire country on how we can do this. What’s exciting about this is this is an Idaho project. This is Idaho wood that we’re harvesting off of this mountain that is going to Idaho companies with Idaho employees right here at the University of Idaho.”

The facility will be home for Idaho’s men’s and women’s basketball teams, which currently split time between tiny Memorial Gym and Cowan Spectrum inside the Kibbie Dome.

“Just the whole vibe of having a brand new arena and the buzz that’s gonna create and already is creating, it’s helped us already with the 2021 class and the ’20 class,” Newlee said. “What a fantastic day; what a great day to be a Vandal.”

Isakson joked that the new arena has been in the works since construction was complete on Memorial Gym 91 years ago.

Every decade, rumors would pop up about a new basketball facility coming, but it never happened — until now.

“We just had a golf event where Orlando Lightfoot came back — a great player for us in the early ‘90s — and he was telling us of plans that they had that he’d heard that this was going to be done by the time he was here, and obviously that never got done,” Isakson said. “So this has been a long time coming.”

The project gained traction in recent years under outgoing UI President Chuck Staben. A grant by the U.S. Forest Service put a “stamp of approval on the project,” Staben said.

The multi-use arena will include an alumni center, and will be a venue for concerts, high school events, concerts, culture events and lectures, but it will primarily be the home for Idaho basketball.

Staben already has a nickname for the arena.

“I can’t resist looking forward to seeing the Vandals take opponents to what I call this building,” Staben said. “The ICCU Arena is the official name, but I think we want to take some of our sister institutions like (Boise State) and (Idaho State) to the ‘woodshed.’ ”