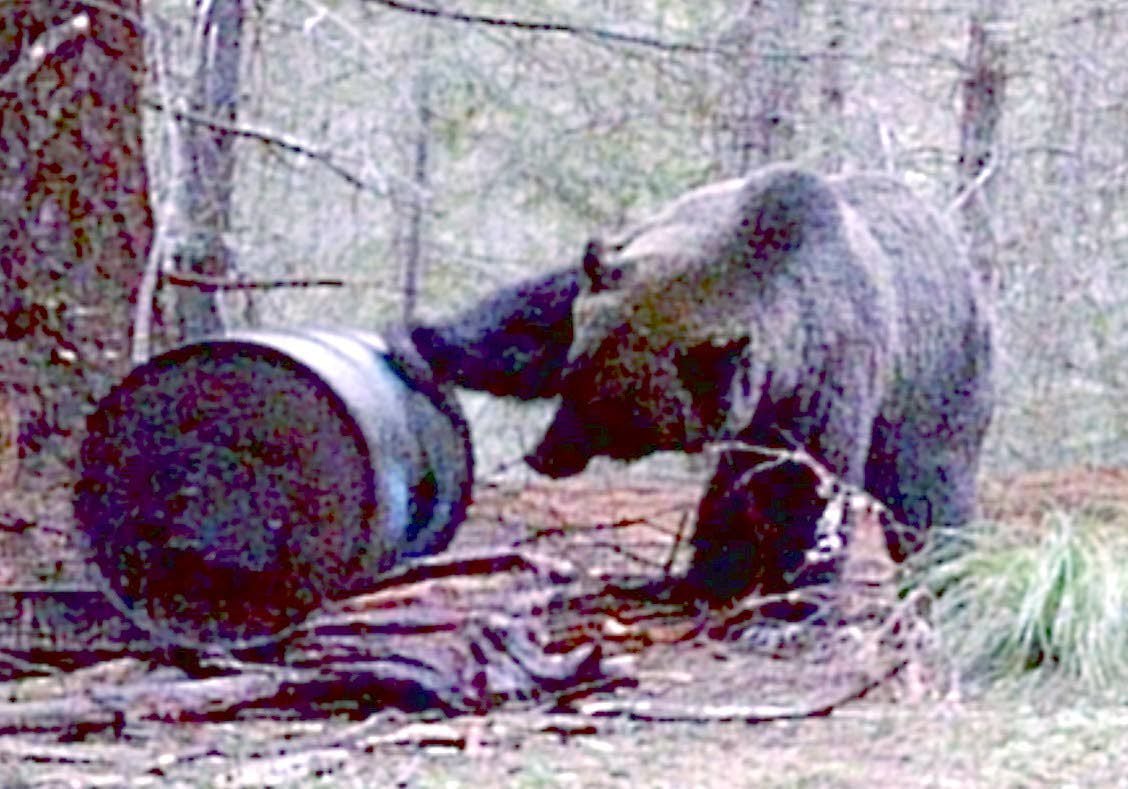 A bear that wildlife experts say is most likely a grizzly was photographed at a baiting station in the Newsome Creek drainage near Elk City last fall. 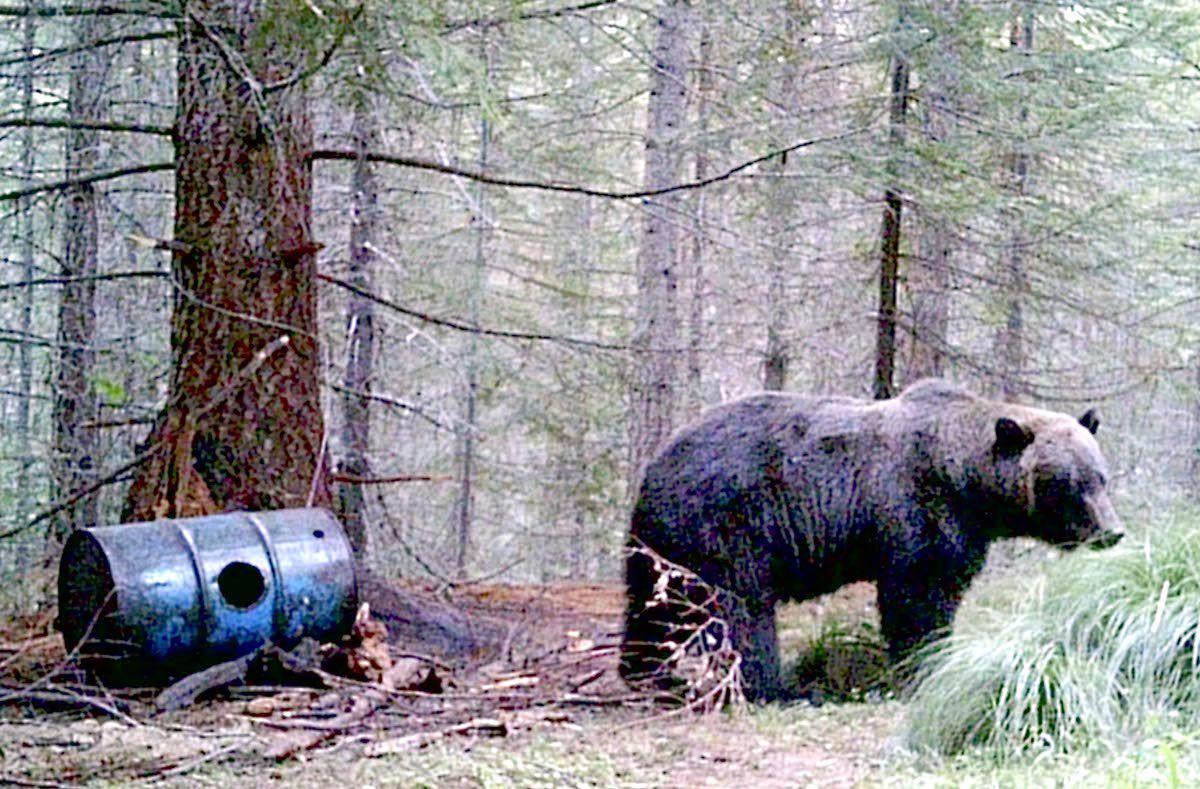 A bear that wildlife experts say is most likely a grizzly was captured at a baiting station in the Newsome Creek drainage near Elk City last fall.

A bear that wildlife experts say is most likely a grizzly was photographed at a baiting station in the Newsome Creek drainage near Elk City last fall.

A bear that wildlife experts say is most likely a grizzly was captured at a baiting station in the Newsome Creek drainage near Elk City last fall.

LEWISTON — North central Idaho appears to have had a second grizzly roaming its wilds last year.

A hunter captured images of a bear at a baiting station last fall on Newsome Creek in the greater Elk City area that experts say likely is a grizzly. The bear has a visible hump and rounded ears. It also appears to have long front claws in one of the photos. All three characteristics are common in grizzly bears, experts say. However, wildlife managers have been unable to say for certain the bear is a grizzly.

The hunter has no doubt.

“It’s definitely a grizzly,” said Jim Alfrey, of Lapwai, who captured the images on his trail camera. “I know for sure it’s a grizzly bear. I’ve shot a lot of black bears. If you look at it compared to the 55-gallon drum, you could put almost three 55-gallon drums inside of it.”

Another grizzly bear spent much of the summer south of Lolo Pass after traveling south from the Cabinet Mountains in Montana. That bear was wearing a satellite tracking collar allowing his movements to be monitored. J.J. Teare, supervisor of the agency’s Clearwater Region at Lewiston said the agency also received photos of a possible grizzly bear in Whitebird Creek and attempted, but failed, to capture that bear. He said officials weren’t able to confirm if the White Bird bear was a grizzly and are listing it is “inconclusive.”

Alfrey captured the images at his bear baiting site below Pilot Nob near Newsome Creek, a tributary to the South Fork of the Clearwater River. In one instance, the bear visited the site about 12 minutes after Alfrey left. When he saw pictures of the bear, he decided to give up the spot. The bear continued to visit the site for about a week, he said. Alfrey later pulled the bait but left the camera. The bear didn’t return after the bait was removed.

Alfrey shared the pictures with Idaho Fish and Game officials. He said they didn’t seem to be overly interested.

“They never really wanted to know about it, it seemed like to me,” he said. “I haven’t heard from them. They said they were wanting to go up there and take a look, but they never got ahold of me.”

Toby Boudreau, chief of the Idaho Department of Fish and Game’s Wildlife Bureau at Boise said agency officials are interested and have looked at the pictures and believe the bear is likely a grizzly.

“I would say there is an extremely high likelihood that was a grizzly bear,” he said.

Wayne Kasworm, a grizzly bear biologist for the U.S. Fish and Wildlife Service at Libby, Mont., reviewed the pictures and confirmed they likely show a grizzly bear. Kasworm also shared the photos with other biologists, who agreed. He said the bear appears to have a shoulder hump, rounded ears, rounded or dished face, possible silver tippings on its fur and possible long claws on its front feet.

Teare said Idaho Fish and Game visited the site to verify where the pictures were taken. They collected DNA samples from scat there and sent it away to be analyzed. The results haven’t yet come back.

The department declined to publicize the bear’s presence last fall, but Boudreau said it plans to inform hunters of the possibility of a bear in the area before the next bear baiting season. Teare said the agency intends to work with the U.S. Forest Service to make sure the public is aware when they are able to confirm the presence of any grizzly bear.

“We want to document them, and we want to let people know within the area because how they recreate and how they use the landscape is different,” he said. “A grizzly bear is still just a bear. There are lots of folks who live and work and play where there are grizzly bears. There are precautions folks have to take, just to be more bear aware as folks should do with black bears anyway,” he said.

He said those precautions include things like keeping a clean camp and securely storing food and other items that can attract bears.

“If you are out in the woods, taking care of your cooler and garbage is important regardless of if you are worried about a grizzly bear or a black bear,” Teare said.

Fish and game officials don’t have any more information about the bear seen at Newsome Creek. For instance, they don’t know if the bear stayed in the area or was just passing through.

Teare said it’s not uncommon for young male grizzly bears to travel great distances as they seek out new territory. He noted grizzly bear populations in the greater Yellowstone National Park area, northern Continental Divide and Glacier National Park ecosystems and in the Cabinet and Yaak ecosystem in Montana are expanding.

“What we are probably starting to see here, as expected in the Bitterroots, is a lot of these bears tend to be young males that are dispersing,” he said. “They are very mobile.”

Fish and Game wildlife biologists deployed about 800 of their own trail cameras in the Clearwater Region last summer as part of an effort to monitor wolf populations. Teare said none of those cameras captured images of grizzly bears. Teare said anybody who does get a picture of bears they suspect to be grizzlies are encouraged to share them with agency officials.

He said DNA helps biologists know for sure if a particular bear is indeed a grizzly.

The collared grizzly bear that spent much of last summer near Lolo Pass returned to the Cabinet Mountains in Montana, where it has denned for the winter.

Grizzly bears aren’t known to occupy north central Idaho, even though much of it has been identified as prime grizzly bear habitat. The federal government once had a plan to reintroduce grizzly bears into remote areas of what is known as the Bitterroot Ecosystem in north central Idaho and western Montana. That plan fell to political pressure, and wildlife officials opted to instead manage the area for natural recolonization by the bears.

Before last summer, the last known grizzly bear in north central Idaho was in 2007. That bear was mistakenly shot by a hunter, who mistook it for a black bear, in the upper reaches of Kelly Creek. Hunting isn’t allowed on grizzly bears, which are protected in some areas as a threatened species under the Endangered Species Act.

Some environmental groups are suing the U.S. Forest Service for allowing bear baiting on federal forests in Idaho and Montana. The groups, which include Western Watersheds Project, WildEarth Guardians and Wilderness Watch, say the practice puts grizzlies at risk of being shot and should be banned.

The Forest Service once regulated bear baiting on land it manages, but stopped in 1992 and instead left it up to state wildlife agencies to decide when and where the practice should be allowed. The groups argue that several grizzly bears have been killed at baiting sites when hunters have mistaken them for black bears.