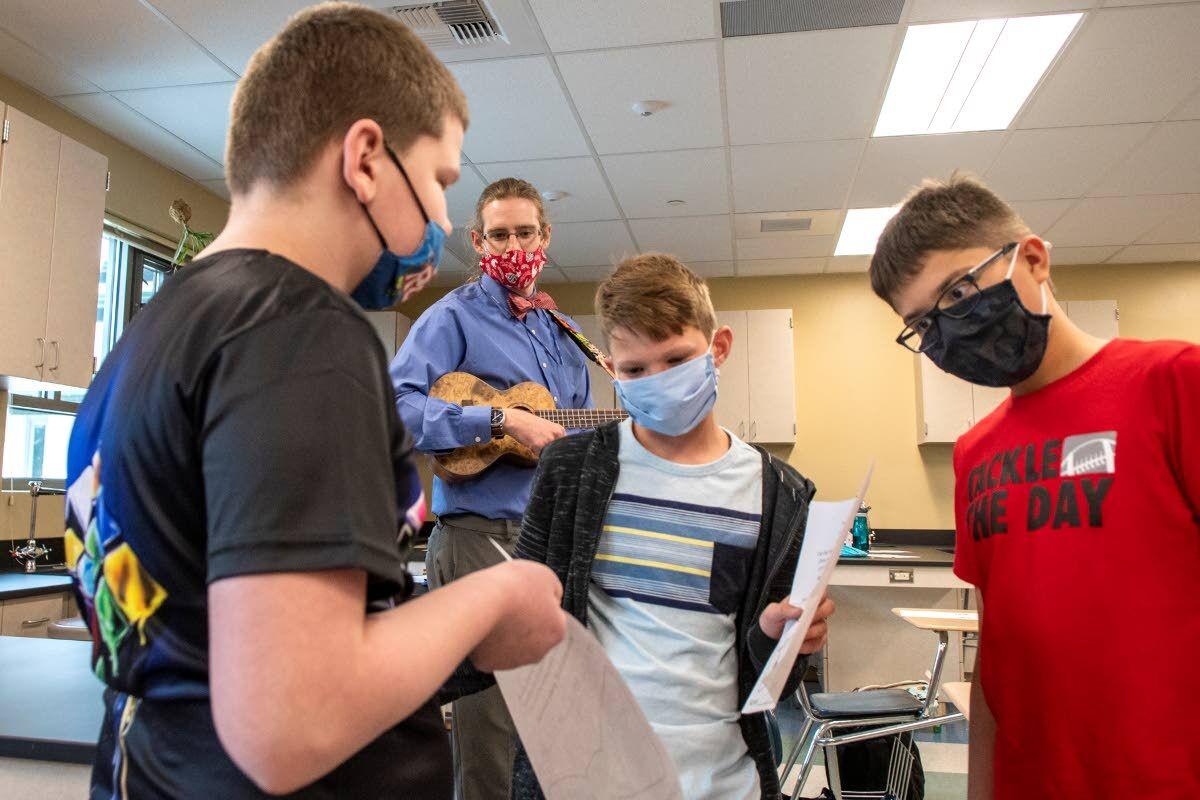 Sixth grade science teacher Geoff Reilly plays the ukulele as students in his classroom introduce one another with their name and favorite animal on the first day of school at Lincoln Middle School in Pullman on Wednesday afternoon. Several districts in the area started school Wednesday. 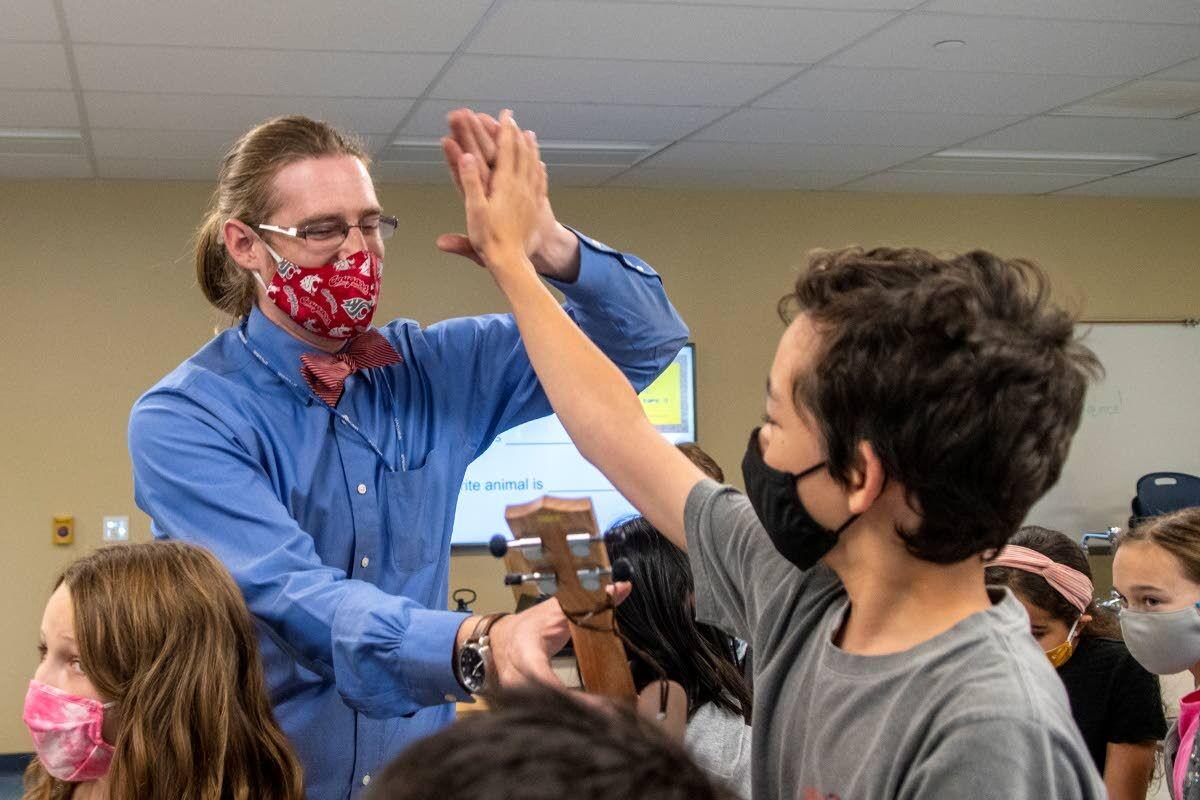 Zach Wilkinson/Daily NewsReilly high-fives a student after they successfully tuned his ukulele. 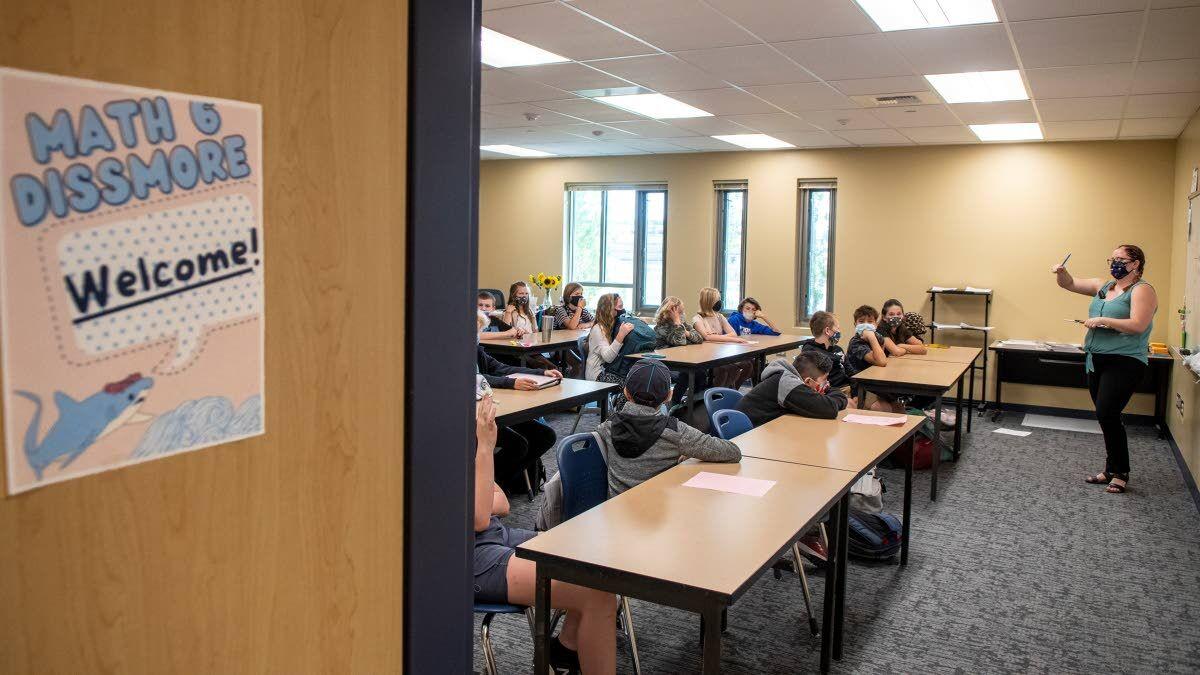 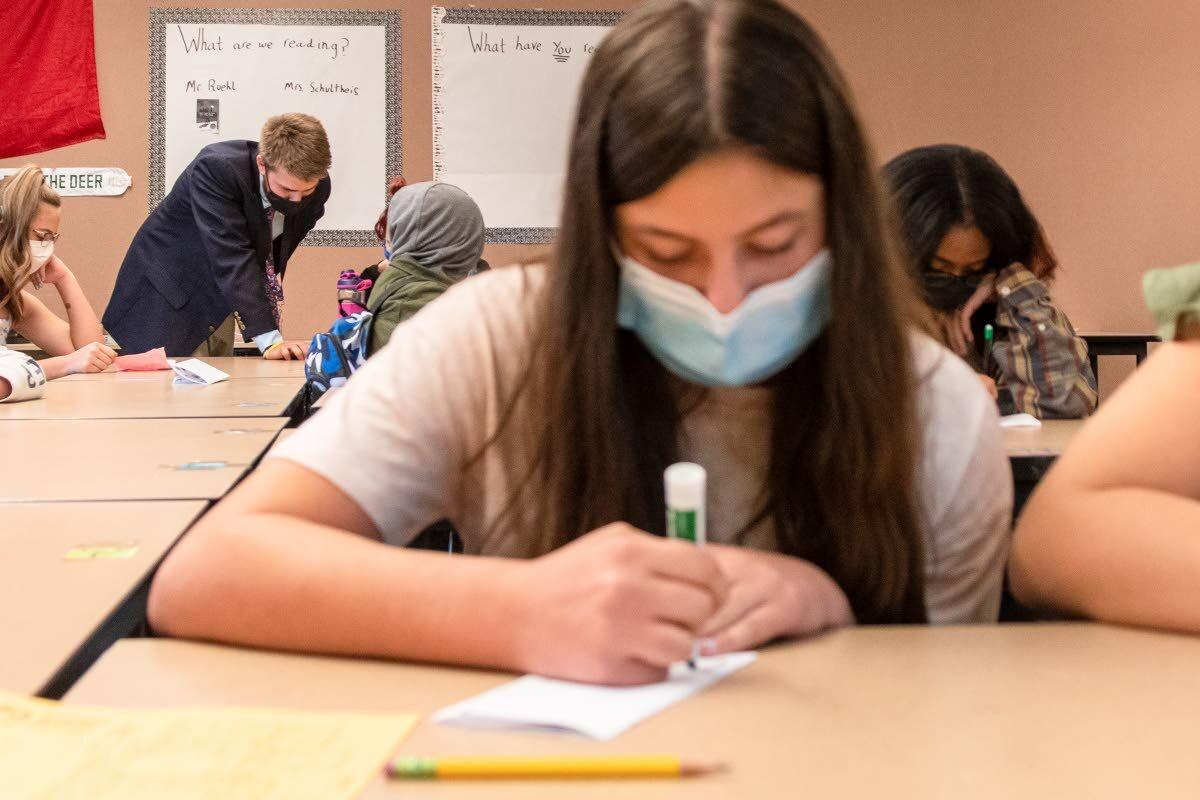 Sixth grade science teacher Geoff Reilly plays the ukulele as students in his classroom introduce one another with their name and favorite animal on the first day of school at Lincoln Middle School in Pullman on Wednesday afternoon. Several districts in the area started school Wednesday.

Zach Wilkinson/Daily NewsReilly high-fives a student after they successfully tuned his ukulele.

Students from kindergarten through high school are filing back into classrooms for the start of a third academic year afflicted by the COVID-19 pandemic.

For many schools across the region, including those in the Pullman, Clarkston, Whitepine and Orofino school districts, Wednesday marked the first day of class.

There were hugs, tears and excitement to be shared at Lincoln Middle School in Pullman where, aside from a mask mandate and some construction, most things are back to normal.

“It’s a little nerve-wracking,” Principal Cameron Grow said while shepherding students through the hallways. “But the staff is giddy and can’t wait to do what we normally do, which is have fun and learn.”

This year, the first day of school at Lincoln looked different than the last, when classrooms remained empty for much of the year and teachers and students often interacted with each other through rectangular screens on Zoom.

“It was great to see everybody at points during the week, but it wasn’t as robust as we would have liked it to be,” Grow said. “We know that kids learn best in person. It’s tough to build positive relationships when you only see students in person twice a week.”

Enforcing the mask mandate recently handed down from the state of Washington has not been an issue, according to Grow. The school had already planned to require face coverings, given the surge in cases driven by the delta variant over the last several weeks.

After seeing some students for the first time since the start of the pandemic, Michael Riley, a history teacher at the school, said the kids have dealt with the circumstances well.

“The kids have been awesome with their masks,” Riley said. “It’s nice when they can wear them not just because they’re supposed to, but because it’s the right thing to do.”

The school is currently serving 610 students in grades sixth to eighth, roughly half of whom remain ineligible for vaccination against COVID-19.

While Pfizer’s shot received full FDA approval Monday for people 16 and older, the vaccine has yet to be approved for kids younger than 12. However, a recent report from NPR states the vaccine maker expects to apply for emergency use authorization for children ages 5 to 11 in September.

Kristen Coke-Sutton, a librarian at the school, said she feels safer being in person since her family has been vaccinated. Her youngest son, a 12-year-old attending Lincoln, got the vaccine as soon as it became available.

Still, she remains worried about kids who haven’t had the option.

“Not having the vaccine last year added to my fears as a parent,” Coke-Sutton said. “Those of us who have had the opportunity to be vaccinated are fortunate, but we have a vulnerable population who we need to remember is still out there.”

After helping about 15 students check out books Wednesday afternoon, she watched them file out of the library. When school was remote, Coke-Sutton struggled to get materials in students’ hands. Sometimes, she even drove to their homes to deliver books.

Of the students who visit her before and after school, she said many are in need of adult connections they didn’t have access to for a while.

“To have them all back just means so much,” she said. “Normally I cry when I’m sad, mad or tired, but this morning I cried happy tears.”