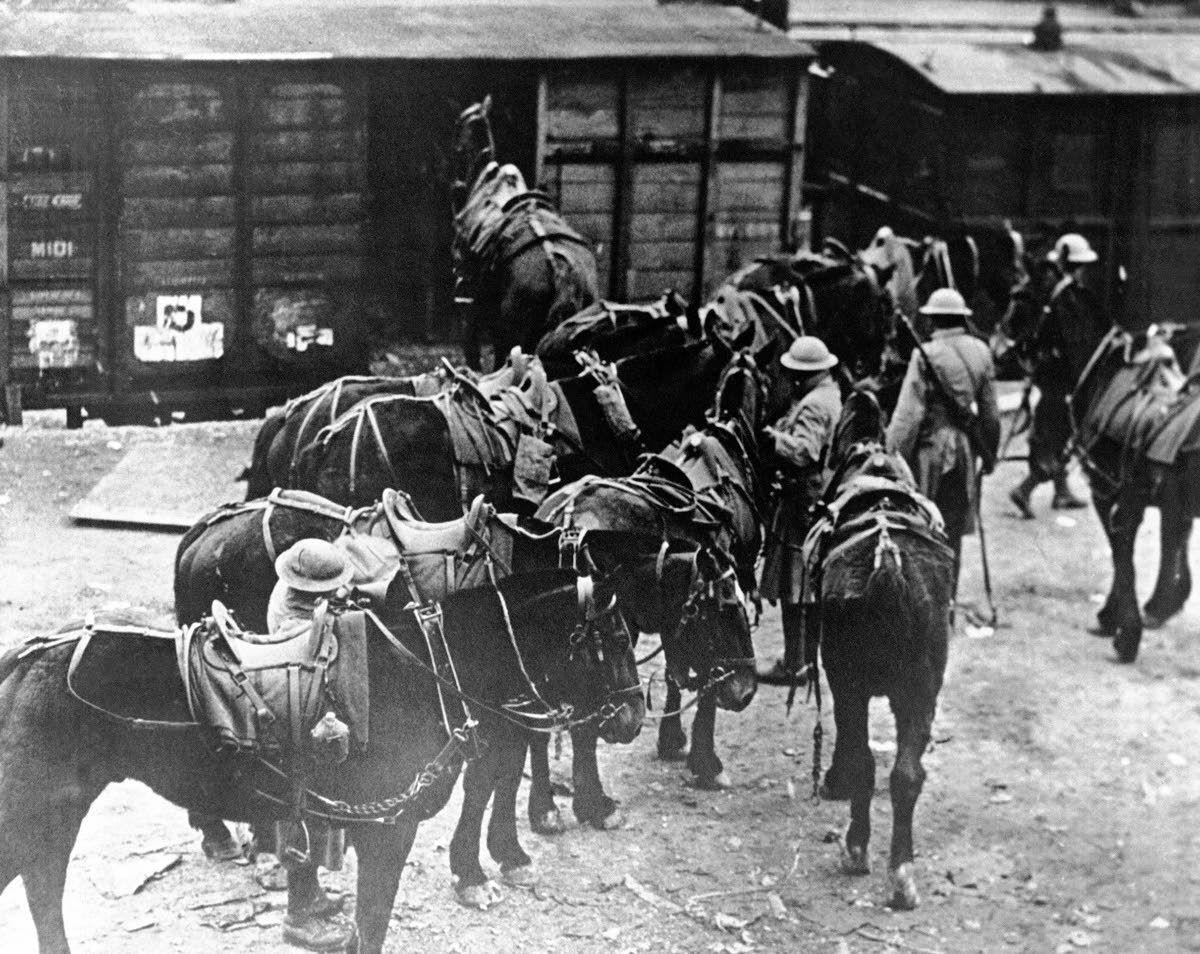 In World War I, more people died of disease than they did injuries. The same happened with the horses used.

Horses were the primary means of locomotion for all war materiel. The so-called “caissons” that went “rolling along,” were piled on wagons pulled by horses. Like the soldiers beside them, horses suffered from poor nutrition and not enough of it, dehydration, unresolved fatigue, disease and much more.

The life of a horse in that conflict was so difficult yet vital that Third Cavalry veterinarian Olaf Schwarzkopf wrote, “It appears that the armies at war are more or less guilty of some form of sinful waste of horses ... .” The quote appeared in his article entitled, “The Changed Status of the Horse in War,” written for the U.S. Cavalry Journal published in January 1916.

Some were issued gas masks, chemical protective leggings, and goggles to protect them from poisonous gases intended for humans.

Contagious parasitic skin infections resulting in sarcoptic mange caused terrible suffering. The itching experienced by horses and mules with mange became almost unbearable and consumed precious calories from an already poor diet. The essential role of equines meant that even with mange, they were often worked until they could go no further. Then they saw a veterinarian.

Mange was cured with a special dip of chemical agents toxic to the parasites. Where the itching skin had been rubbed raw, it would often take months to heal and regrow hair. They typically were not euthanized at the time because there were simply not enough horses for all the tasks they were needed to perform.

A dip is a long trough deep enough to submerge a horse filled with toxic chemicals. The chemicals typically included a solution of lime, sulfur or sometimes arsenic. At the exit end of the trough was a long incline with steps for the horses to make their way out.

Alongside the dipping tank were men in raincoats and Sou’wester hats with long handled scrub brushes. They worked at a fiendish pace to scrub the horses as they walked out. They also got their mouth and eyes filled with the solution and the sloughed skin from the horses. In rear camps, 1,000 horses a day could be treated, and the solution was replaced every third day.

The injuries suffered ranged from typical battlefield wounds from bullets and shrapnel to skin and lung irritations from poison gas. Simple cuts were sutured shut after cleaning. Deep penetrating wounds however resulted in euthanasia by gunshot. There was no effective way to treat the infections that resulted.

Injuries from gas were a long-term proposition — meaning one month. If the horse had not recovered in a month, it was euthanized.

The silent killer however was overworking horses and the injuries and illnesses that resulted. It is estimated by some sources that each horse was called upon to do the work of two peacetime counterparts … and to keep doing it until ... whenever. Teams of two hauled the weight of a four-horse hitch.

Horses were forced off-road to open up those for the few faster trucks and cars that could get through. Often that meant hauling heavy freight in soft plowed fields or mud. Some artillery horses spent 72 hours in harness and were so fatigued when relieved some fell into a sleep and could not be easily roused.

Similarly, cavalry horses were kept under saddle for three or four days at a time, too.

As for veterinary care, only two were assigned for each horse regiment, that’s 2,000 to 5,000 soldiers. It’s hard to imagine.

Powell is the public information officer for the Washington State University College of Veterinary Medicine, which provides this column as a community service. For questions or concerns about animals you’d like to read about, email cpowell@vetmed.wsu.edu.