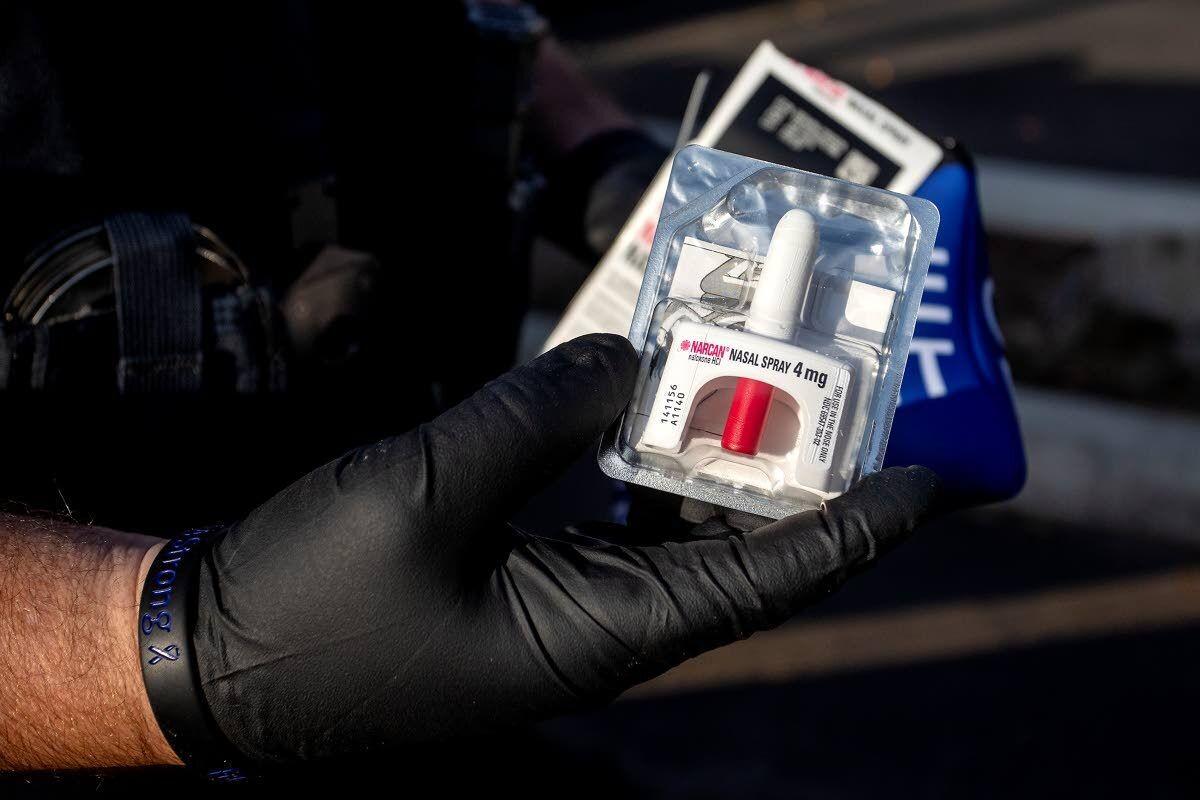 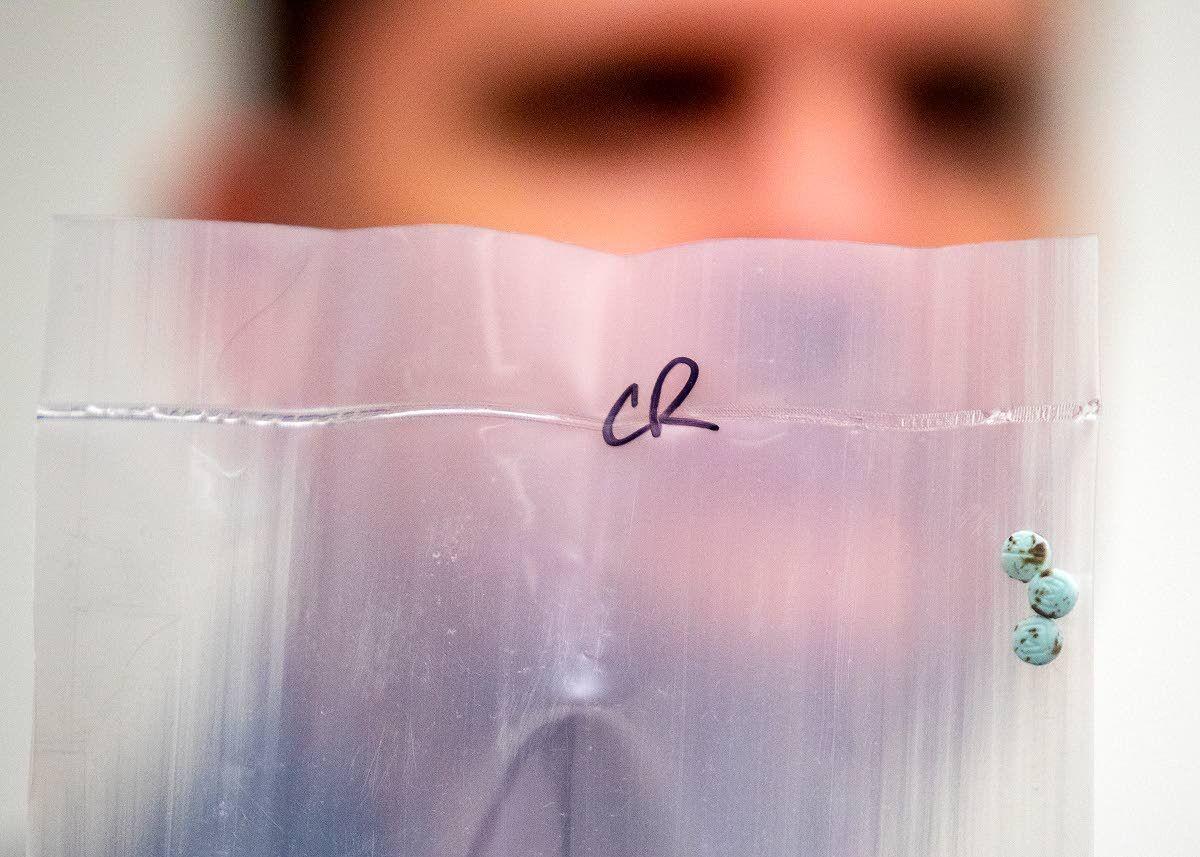 Sgt. Chris Reese holds a sealed sample of fentanyl last week at the Lewiston Police Department. Use of the powerful drug has become more commonly seen by first responders in recent months. 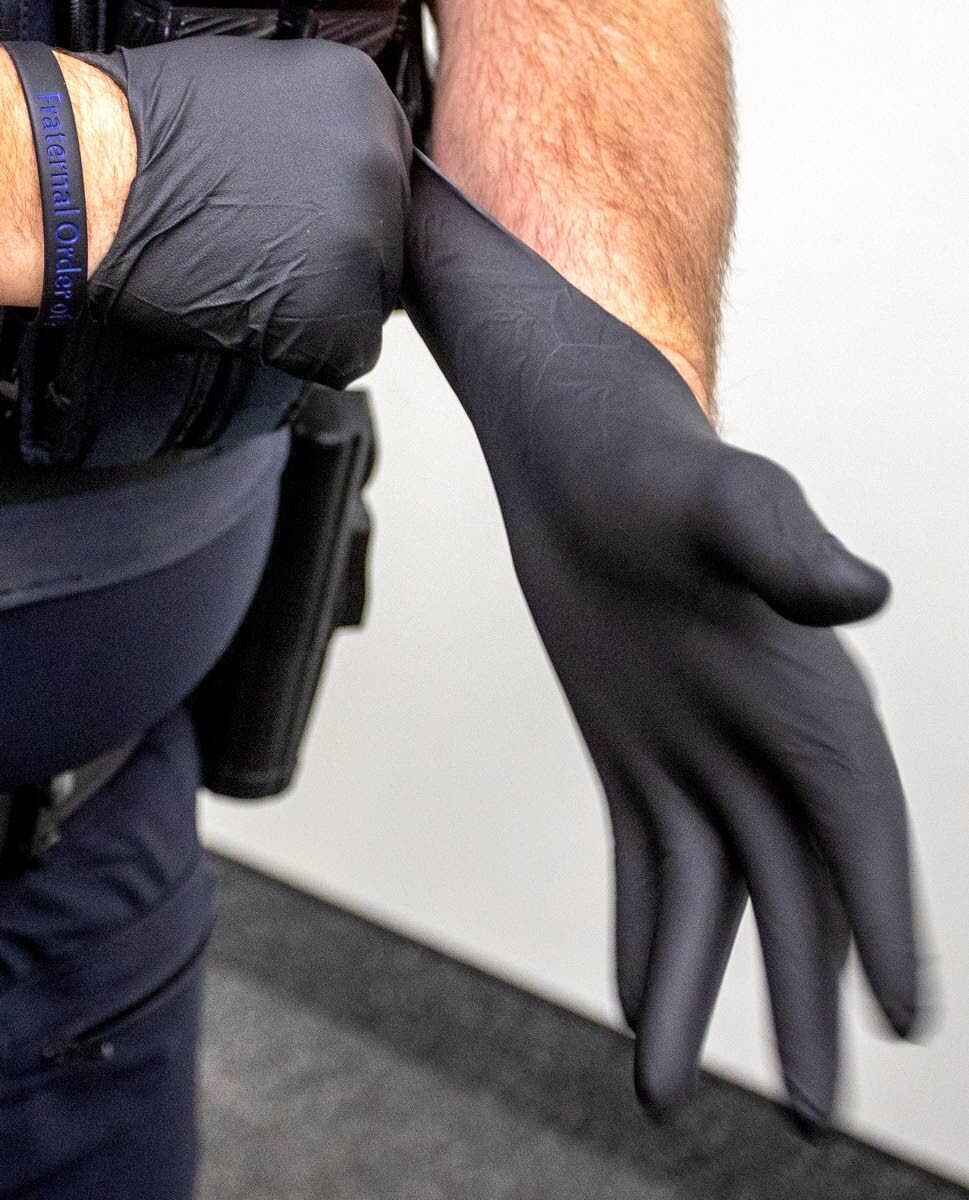 Sgt. Chris Reese puts on gloves before handling a sealed sample of fentanyl last week at the Lewiston Police Department. 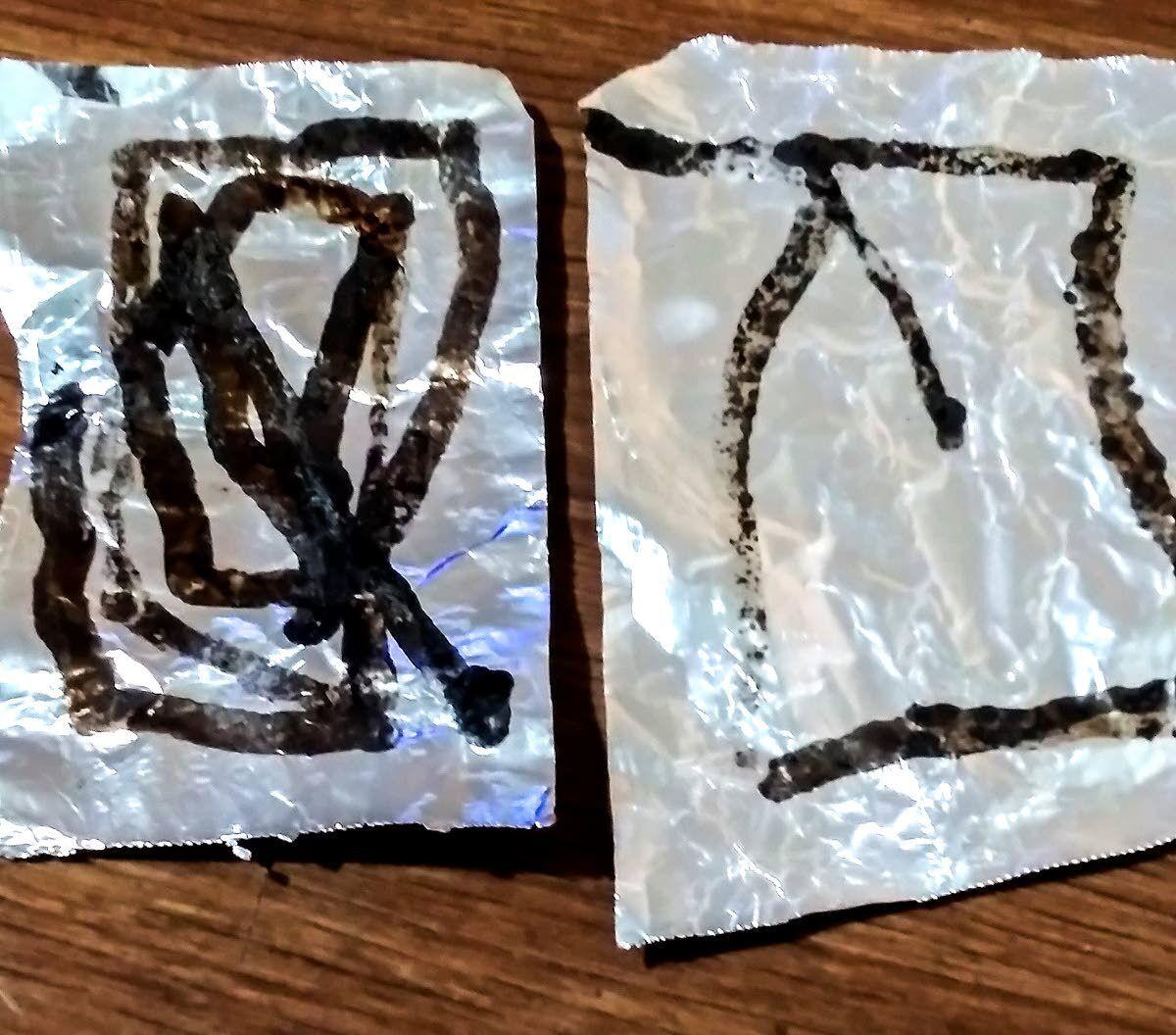 Foil with burn marks, from which fentanyl is smoked, is seen in a photo provided by Nez Perce Tribal Police Department. 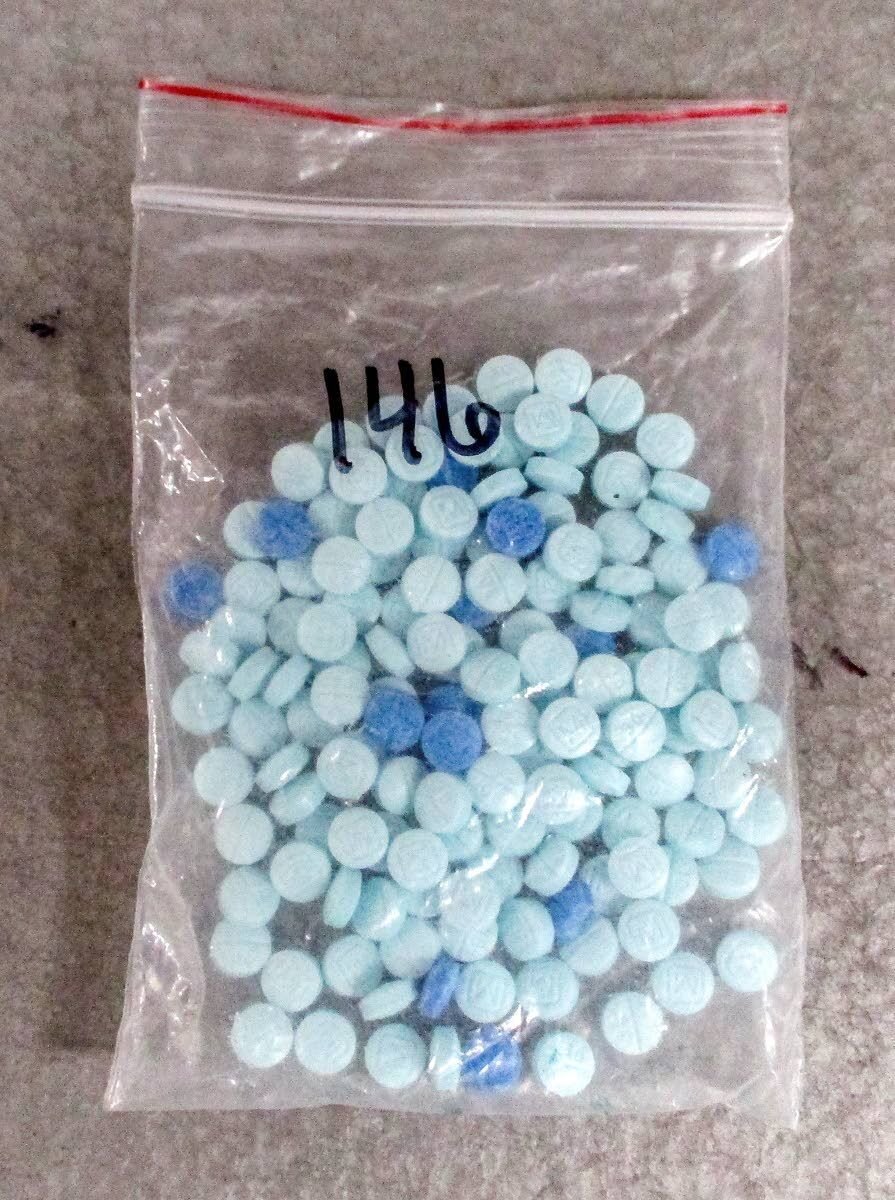 A bag of fentanyl pills taken as evidence is seen in a photo provided by Whitman County Sheriff's Office.

Sgt. Chris Reese holds a sealed sample of fentanyl last week at the Lewiston Police Department. Use of the powerful drug has become more commonly seen by first responders in recent months.

Sgt. Chris Reese puts on gloves before handling a sealed sample of fentanyl last week at the Lewiston Police Department.

Foil with burn marks, from which fentanyl is smoked, is seen in a photo provided by Nez Perce Tribal Police Department.

A bag of fentanyl pills taken as evidence is seen in a photo provided by Whitman County Sheriff's Office.

Daniel Taylor has seen a grim parade of illegal narcotics wreak havoc on local communities during his 17-year career in law enforcement.

First there was crack cocaine. Then methamphetamines and the opioid epidemic came along to steal the show. But nothing could have prepared him for the recent arrival of the most powerful opioid on the block, fentanyl.

“I’ve worked a lot of different drugs,” said Taylor, a lieutenant with the Nez Perce Tribe’s police force. “And this one scares the heck out of me. It’s crack cocaine times 100.”

Fentanyl is extremely powerful, about 80 to 100 times stronger than morphine. Many people have only heard of it because of celebrity overdose deaths like musicians Prince and Tom Petty and the actor Michael K. Williams. And while other areas of the country have been grappling with the synthetic opiate for a few years now, it only recently arrived on the scene in north central Idaho and southeastern Washington, according to Taylor and other agencies involved in drug interdiction.

Hundreds of doses of fentanyl have been seized over the last several months by various departments. Most of them come in the form of counterfeit blue oxycodone pills with a letter “M” stamped on one side and “30” on the other. They originate from clandestine labs in Mexico, earning them nicknames like Mexis, Mexi 30s or simply “blues.”

The problem has already become so bad on the Nez Perce Reservation that officials recently issued a public health alert to educate people about what the drugs and their associated paraphernalia look like. The tribe has also established a task force to get ahead of the coming wave.

“I’ve seen what crack cocaine does to people and to a community, and I know it’s coming with these blues,” Taylor said. “I know it’s coming because I’ve been doing this for so long. We’re in for it. Definitely.”

Taylor said his numbers are probably low, however, because police only recently asked hospitals to begin testing overdose victims for fentanyl.

Arrests are also up, with three cases pending in Nez Perce County. One involves a young woman from the Tri-Cities who police allegedly caught this summer with 200 fentanyl pills.

‘All it took was that one hit’

Tribal police have taken a different tack with the arrival of fentanyl, mainly since it is so easy to overdose and die on blues because of the wide variability in their dosages. So instead of just hauling offenders off to jail, officers have been working hard to get users into rehab before it is too late.

One example is a young woman whom Taylor has been working with personally, with intensive support from her mother. The Lewiston Tribune agreed to keep their names confidential because of fears of reprisal for speaking publicly about the drug trade.

The woman said she started using fentanyl about a year ago, almost on a whim.

“My first thing was doing heroin,” she said. “I guess that wasn’t enough for me.”

A friend suggested she try fentanyl.

“They said it would knock me on my ass,” she said. “All it took was that one hit, and I’ve never injected heroin again.”

Soon, her mother didn’t even recognize her.

“She wasn’t really my daughter,” she said. “There’s my daughter, and there’s this other person. It was bad. I didn’t like that person.”

The woman suffered through at least three overdoses, sometimes requiring the use of Narcan.

“Every pill is different,” the woman said, noting that she partook in the common practice of smoking the pills off a piece of aluminum foil. “You never know how much fentanyl you’re going to get in there. You never know when you’re going to take that last hit with the pills. But once you get addicted, especially to the blue pills, you don’t care as long as you’re getting high or feeling that rush.”

As little as 2 milligrams of fentanyl can be a lethal dose. According to a U.S. Drug Enforcement Administration analysis, blue pills seized from Mexico had between 0.62 and 5.1 milligrams, with almost a quarter of the pills carrying a potentially lethal dose.

The woman said one of her main concerns now is warning children to stay away from the pills, since they look like a piece of candy.

“All it takes is for a little kid to get a pill, and they’re gone.”

Several law enforcement agencies in the region, including the Lewiston Police Department, issue Narcan to officers so they can save lives when they encounter an overdose victim. Sgt. Chris Reese, who has been the Lewiston department’s K9 handler since 2009, said he has started to see users carry their own Narcan.

“They know there’s a high probability they could overdose, and so they take the necessary steps to carry Narcan with them because they know the risk factor,” Reese said. “But because of their addiction, they don’t care. They still want to get their high, even if it means they could possibly overdose and die off them.”

Officers have tried to warn users that they are basically playing a game of Russian roulette when they use fentanyl.

“I have no doubt about it,” Reese said. “It’s just a matter of time before they get the wrong dosage, and they’re going to cash out.”

The tribe’s task force has launched a multipronged approach to combat the rise in fentanyl abuse. Taylor said its main thrust is to keep people from dying. Tribal health officials started a public education campaign that includes the distribution of Narcan doses, and the training of community members on how and when to use them.

The social media alerts and flyers all over the reservation — including in schools — prominently feature pictures of the blue pills so people know what to look for. Detectives with the police force have also been tasked with training every division in the tribe on drug identification, including staff at the Clearwater River Casino outside Lewiston. There is a special focus on the blue pills, the soot-streaked patches of foil used to smoke them and the telltale smell of burnt marshmallows from the high sugar content in the pills.

Finally, there has been a change in how the tribal police approach users who are not trafficking in the pills, Taylor said. Tribal leadership, police, prosecutors, treatment providers and other members of the justice system are now working together toward a therapeutic, problem-solving approach.

“This is new territory for our police officers,” Taylor said. “I think it is important for people to understand that change is needed, and it will take this type of group effort to slow down the damage that this drug will inflict on a community.”

He said the shift in policy has actually been refreshing.

“Tribal police officers have a closer connection to the people we serve,” he said. “It feels good to do it that way. And I’ve been doing this long enough to know that we’re not arresting our way out of this problem.”

As the commander of the Quad Cities Drug Task Force, Whitman County Sheriff Brett Myers is intimately familiar with the illegal narcotic trade in the region. And like Taylor, he said a storm is brewing.

“I think we’re just seeing the first wave of this,” Myers said. “We saw maybe one or two cases two years ago, three or four last year, and then about once a month around the start of this year. But starting in May or June, it’s become a weekly occurrence.”

Overdoses have been up, he said, and there was one fatality this summer in Whitman County when a young woman died in Tekoa after using the blue pills.

The Inland Northwest is typically a year or two behind the drug trends of more populated areas of the country, so it makes sense that the region has been spared the fentanyl epidemic for a time. But Myers said a steady rise in heroin use over the last few years, fueled by the wider opioid epidemic, has led users to turn to fentanyl for a more convenient, more intense high.

Recent moves to decriminalize simple possession have made enforcement and investigations more difficult, however. Those caught with only pills can face lesser misdemeanor charges, taking leverage away from drug cops hunting for bigger fish.

“If a person just wants to go down on a possession of a controlled substance charge in Washington right now, it’s hard to get people to tell us where the drugs are coming from,” Myers said. “And quite frankly, if they say they don’t want to work with us, we have to figure out other ways to get there.”

He said investigators have been able to develop other methods to work cases back up the chain. But the combination of what Myers called lax drug policy with the wide availability of fentanyl is creating a perfect storm that is about to engulf the region.

Tackling the issue from all fronts

The Nez Perce Tribe isn’t the only entity bracing for the fentanyl wave. Last week Idaho Gov. Brad Little visited the southern U.S. border to highlight his concerns about the surge in overdoses from methamphetamine and fentanyl coming from Mexico. Last summer, Little sent a team of Idaho State Police troopers to the border to help with intelligence gathering and investigative work to stop drugs from coming across the border, according to the Associated Press.

And last month the Moscow City Council funded police Chief James Fry’s request for a drug dog to help aid his department in its increasing encounters with methamphetamine, heroin and fentanyl, substances that have led to overdoses within the city.

“It’s not a Native problem, and it’s not a white problem,” Taylor said. “It’s just an everything problem. We call it shoveling sand with a fork. We’ll take off a trafficker, and maybe even an organization, and within two weeks or three weeks there’s another one in place.”