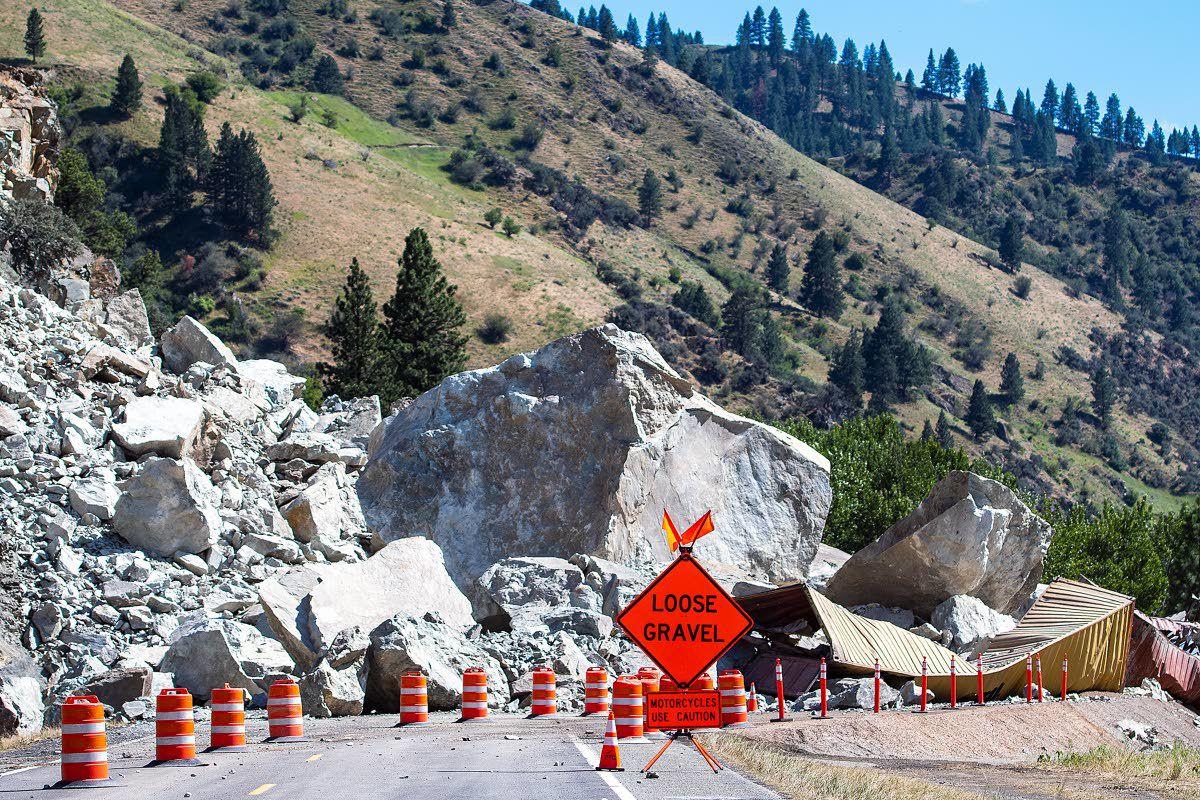 A sign warning people about loose gravel stands in front of a 25-foot-tall boulder that fell off the hillside adjacent to U.S. Highway 95 at milepost 188 on Thursday night about 6 miles south of Riggins. 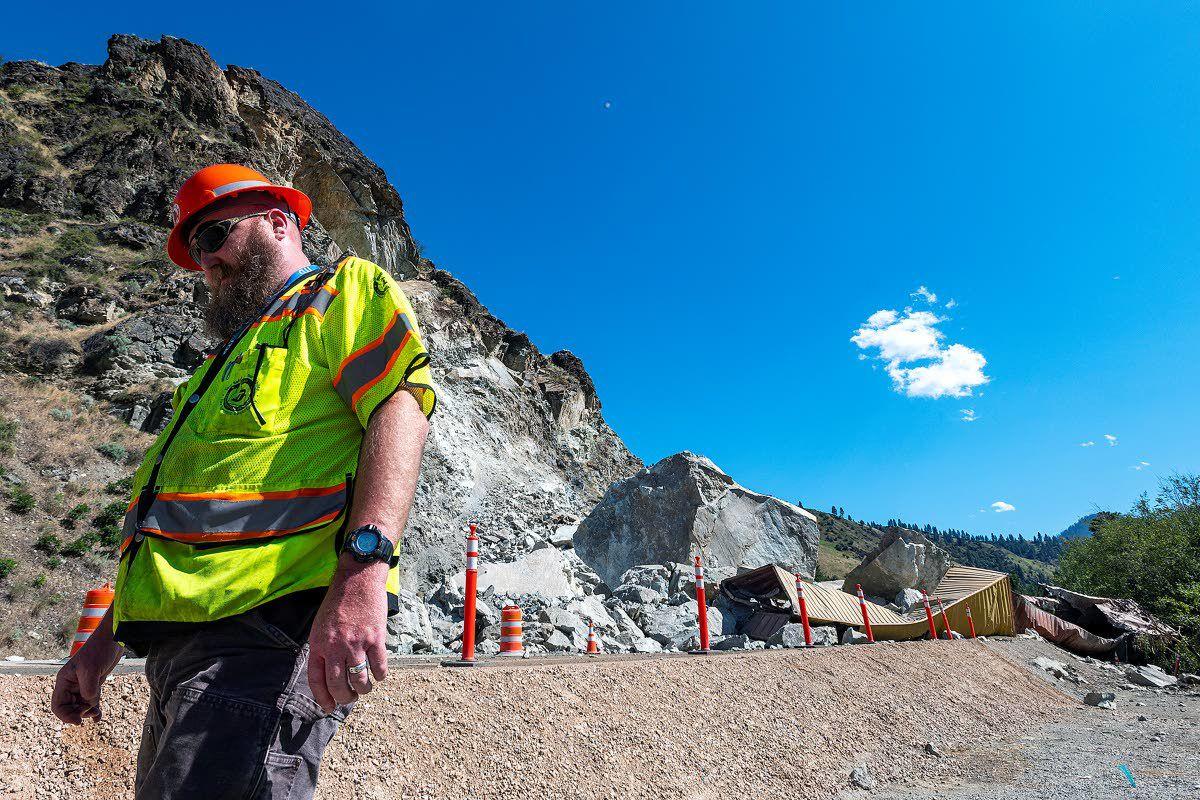 Bill Foust, a district records inspector with the Idaho Transportation Department tasked with helping the traffic flow around the rockslide on U.S. Highway 95, walks near the scene Friday afternoon. 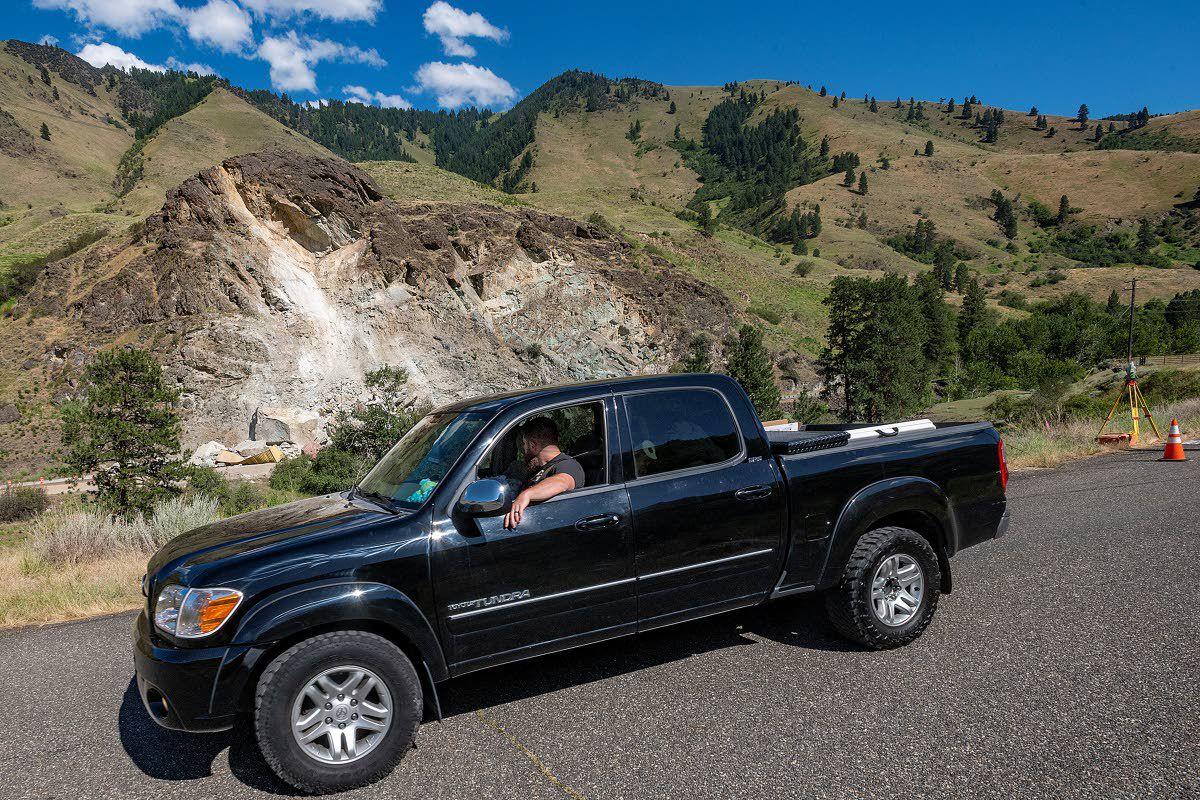 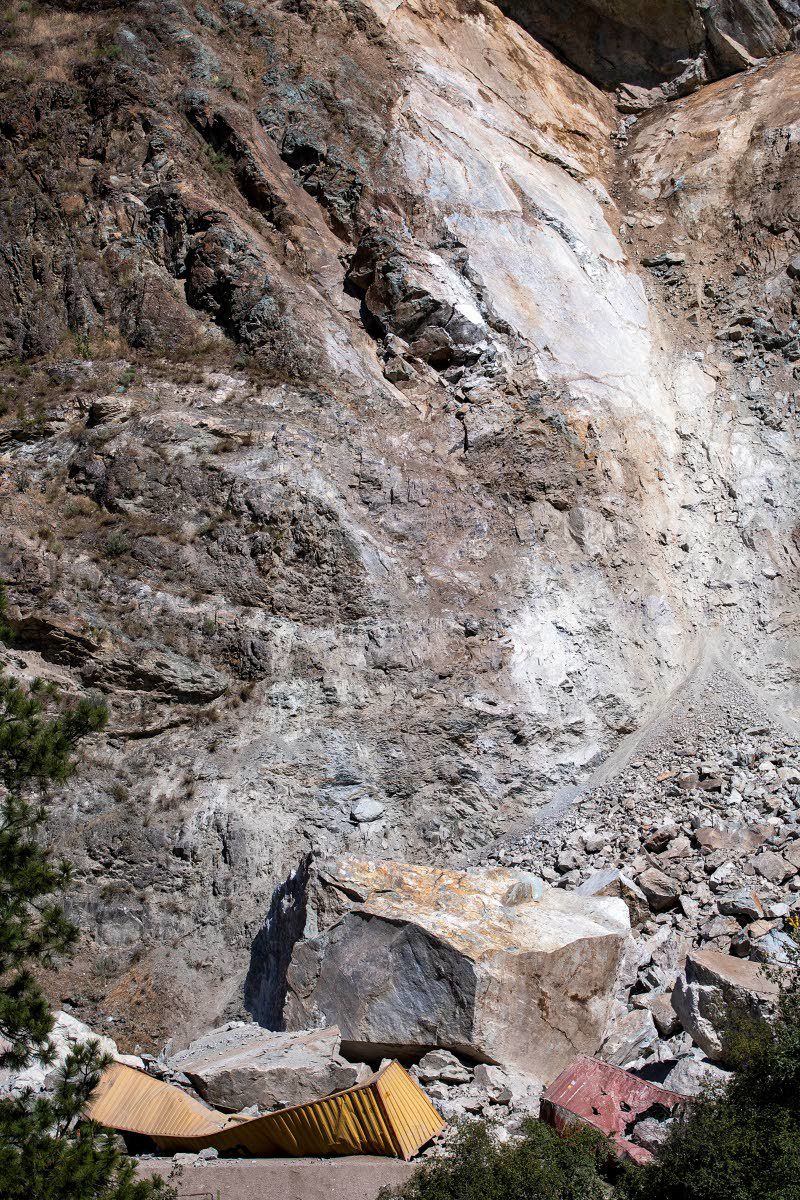 A path a large boulder took down the hillside can be made out at the site of a rockslide on U.S. Highway 95.

A sign warning people about loose gravel stands in front of a 25-foot-tall boulder that fell off the hillside adjacent to U.S. Highway 95 at milepost 188 on Thursday night about 6 miles south of Riggins.

Bill Foust, a district records inspector with the Idaho Transportation Department tasked with helping the traffic flow around the rockslide on U.S. Highway 95, walks near the scene Friday afternoon.

A path a large boulder took down the hillside can be made out at the site of a rockslide on U.S. Highway 95.

U.S. Highway 95 is expected to remain closed 6 miles south of Riggins until at least next week, officials from the Idaho Transportation Department said Friday.

Although the department had hoped to have at least one lane of traffic near milepost 188 open intermittently for one-lane traffic, continued rockfall from the cliff above the roadway makes that impossible. Massive boulders continued to roll down the hillside Thursday night, adding to the blockage that inundated the roadway July 3.

Jared Hopkins, operations engineer for the department, said the highway will remain closed “until we are able to evaluate this new development and determine the best option to safely stabilize the slope.”

Road crews built a temporary gravel road to detour traffic around the base of the rockslide, which was opened briefly this week. But significant movement of the rocks above continued, which prompted officials to close the road again Wednesday.

“The extensive rockfall that occurred (Thursday) night confirmed that we had made the right decision to completely close that portion of U.S. 95 to traffic,” Hopkins said.

Crews will begin again early next week to scale the slope and survey the area.

“Currently there are a lot of overhanging boulders and ledges,” Hopkins said. “We don’t yet know how stable these are and until we are able to further evaluate the area, crews will not be able to engage in rock removal operations.”

The department has made some upgrades to the Old Pollock Road on the opposite side of the Little Salmon River to be used as a detour while the main highway is being cleared. That route will be open from 6 a.m. to 8 p.m. and will remain closed at night to allow crews to perform maintenance on the roadway. It is an Idaho County road that had been closed to traffic for more than a year because of pavement sloughing. The county has estimated the fix at around $1.5 million.

The U.S. Forest Service also issued a news release Friday warning motorists not to rely on the French Creek Road that climbs the mountain from the Salmon River and extends to Warren as an alternate route.

“French Creek Road is a high clearance road (not for two wheel drive vehicles) that is not recommended for travel by inexperienced mountain road drivers,” the news release said. “Many drivers have had a difficult time traversing this road and have placed themselves in peril. Many vehicles have been driven off the road, and fortunately have been able to be recovered before a serious accident took place.

“The road is rough with drop offs of (more than) 1000 feet. If you do not have experience driving high mountain roads, or are an inexperienced driver, the Forest Service advises you to not use this road.”

The transportation department also warned that the slope and area around the slide at milepost 188 is considered “extremely hazardous” and citizens are asked to stay away from the area for their safety. The department also asks drivers who use the detour on Old Pollock Road to drive attentively to keep traffic flowing.

“The proven unpredictability of this slide requires that we remain flexible,” Hopkins said. “While our goal is to safely reopen the highway as soon as possible, we are very thankful that no one has been injured and will focus our efforts to ensure that it remains that way.”

RIGGINS — The detour around the rockslide on U.S. Highway 95 that opened Wednesday will be closed today following the discovery of “significan…