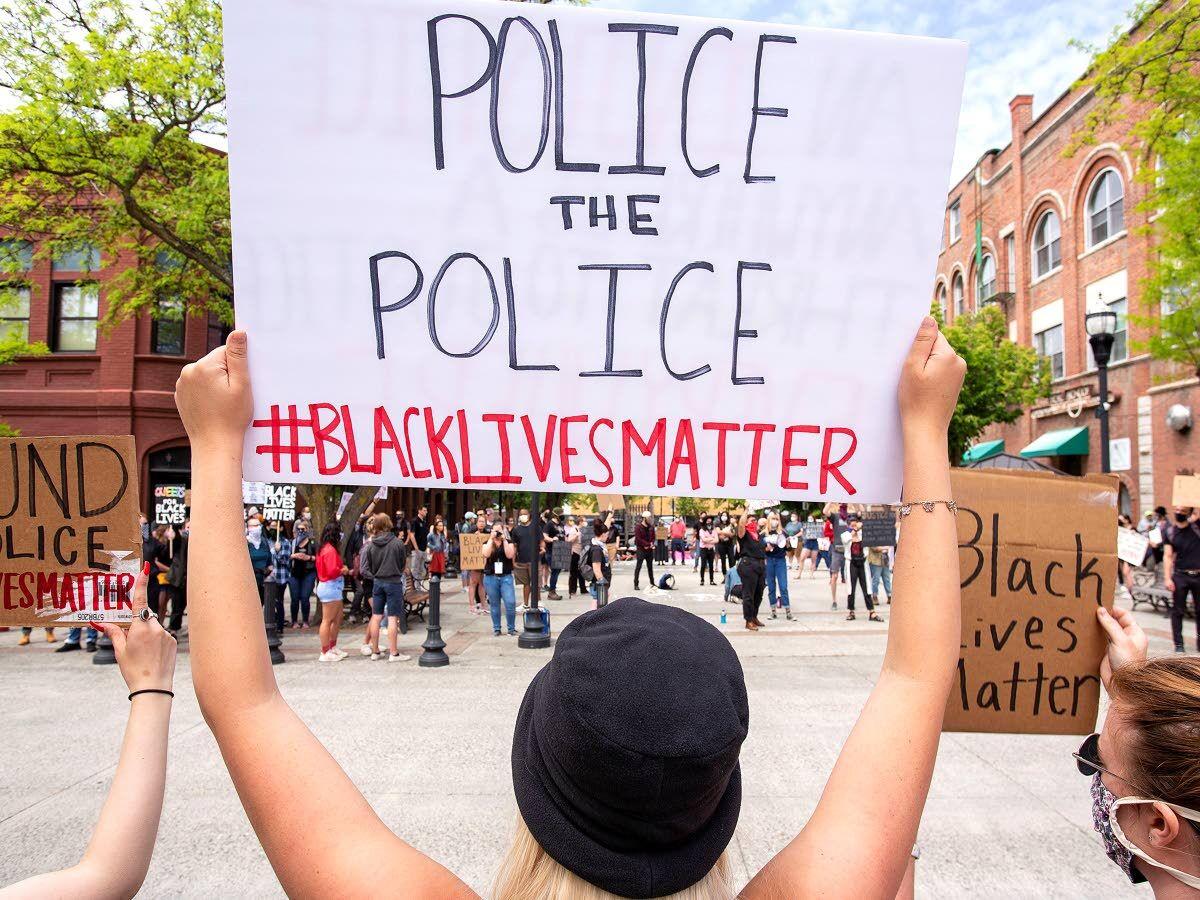 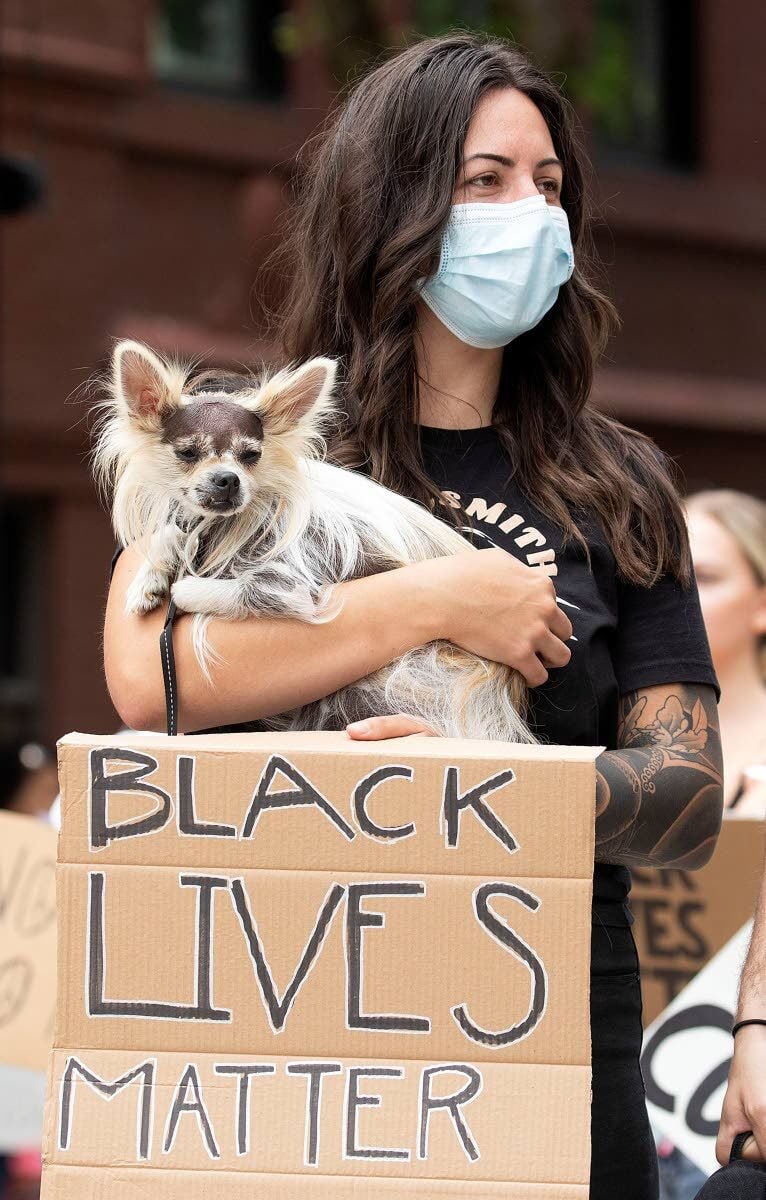 Sophie Campbell, of Moscow, and her dog, Frits, participate in a Black Lives Matter solidarity vigil. 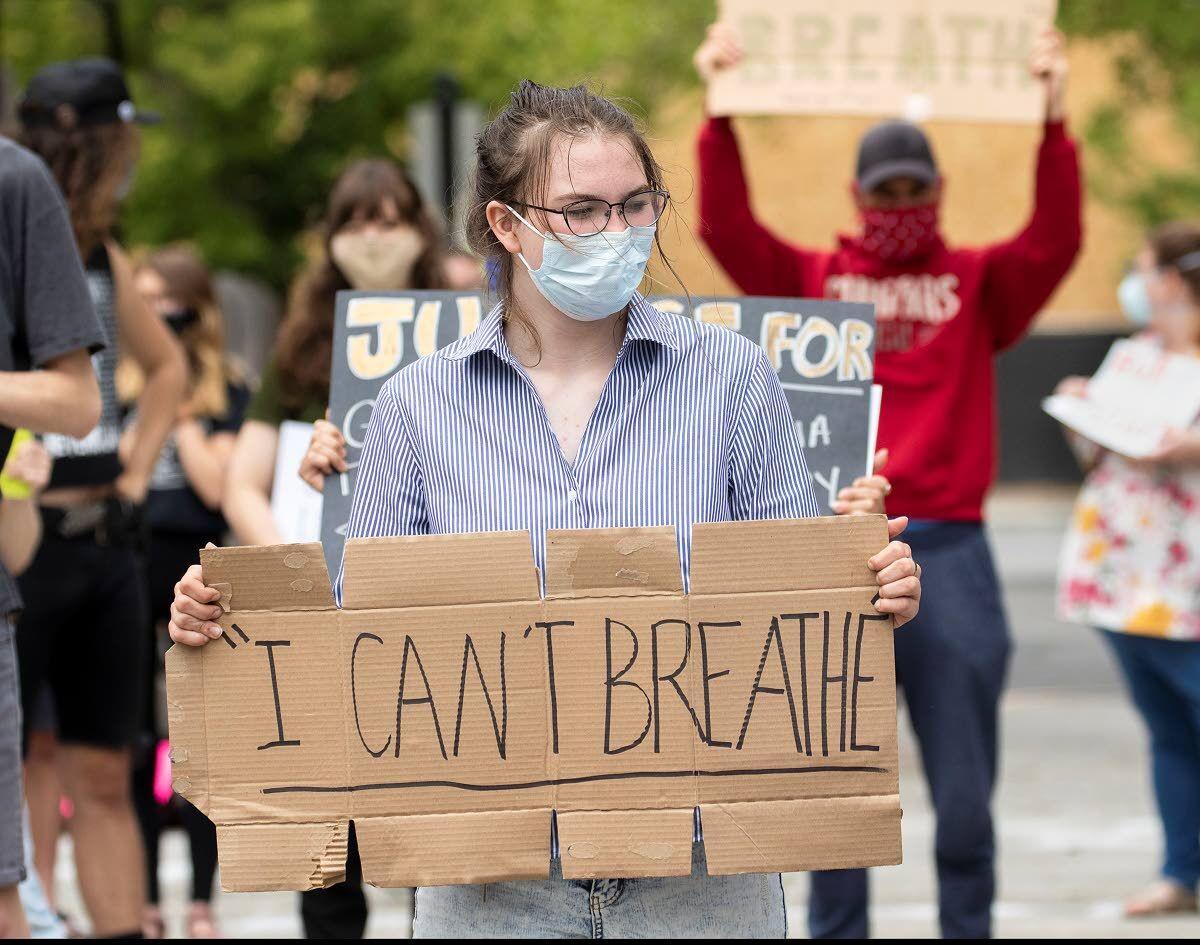 Protesters participate in a Blacks Lives Matter solidarity vigil on Wednesday at Friendship Square in Moscow. 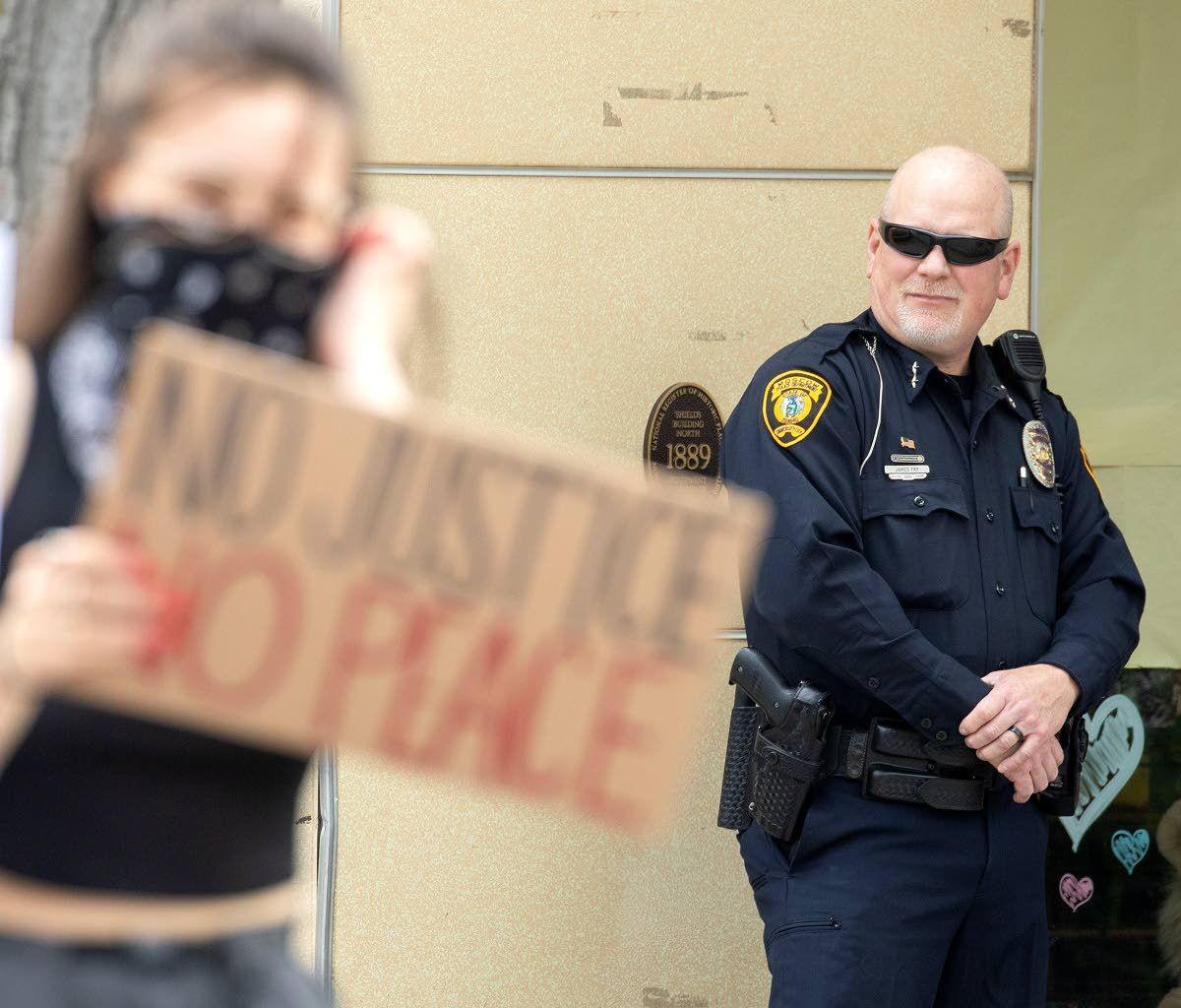 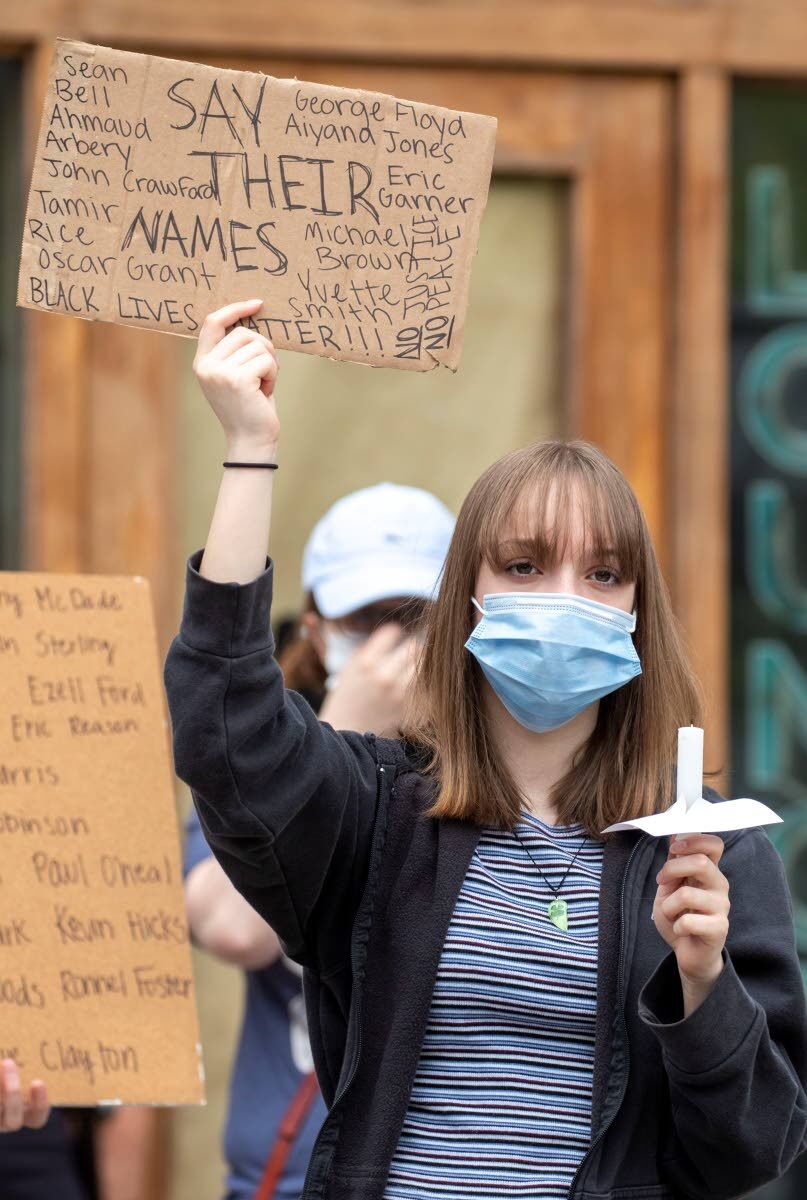 Kalia Baltzell of Moscow participates in a Blacks Lives Matter solidarity vigil on Wednesday at Friendship Square in Moscow. 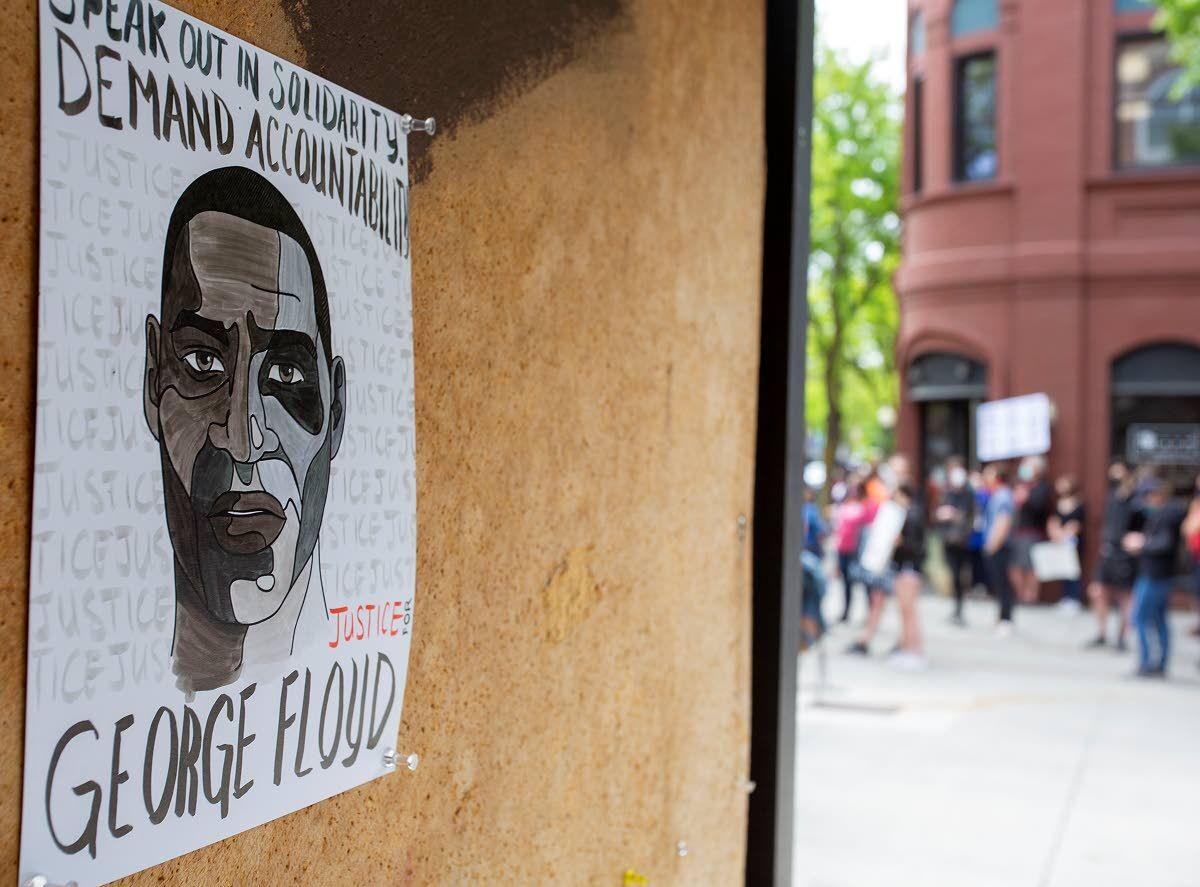 A sign remembering George Floyd hangs on a bulletin board during a Blacks Lives Matter protest on Wednesday at Friendship Square in Moscow.

Sophie Campbell, of Moscow, and her dog, Frits, participate in a Black Lives Matter solidarity vigil.

Protesters participate in a Blacks Lives Matter solidarity vigil on Wednesday at Friendship Square in Moscow.

Kalia Baltzell of Moscow participates in a Blacks Lives Matter solidarity vigil on Wednesday at Friendship Square in Moscow.

A sign remembering George Floyd hangs on a bulletin board during a Blacks Lives Matter protest on Wednesday at Friendship Square in Moscow.

“BLACK LIVES MATTER” signs, chants of “no justice, no peace, no racist police” and supportive horn honking from passing motorists were seen and heard at the Palouse Demands Justice solidarity vigil Wednesday at Friendship Square in downtown Moscow.

Protesters filled portions of Friendship Square for the vigil, which started at 11 a.m. and lasted until shortly after 5 p.m. More than 100 were in attendance around noon.

The event was intended to protest “racial, state-sanctioned police violence and white supremacy” in the wake of the murder of George Floyd last week in Minneapolis, according to the event’s Facebook page. The post asked that attendees wear facemasks and keep safe distancing while standing together.

A long moment of silence was held as a woman, using a megaphone, read off several names of black people who were killed by police in recent years. During the silence, some attendees held lit, white candles distributed by organizers.

Protesters cheered when a woman announced over the megaphone that Derek Chauvin, the white Minneapolis police officer who knelt on Floyd’s neck and killed him, now faces an upgraded charge of second-degree murder and that three other officers at the scene have been charged.

Nelson, a Moscow Democrat, said in a news release that the vigil is a peaceful, safe event that allows Idahoans a place to mourn the loss of others and imagine a “better, less violent future.”

“George Floyd’s death is unacceptable and we cannot tolerate the excessive use of force by the police,” Nelson wrote in the release. “I deeply appreciate that our community has come together to demand justice for black communities in every part of the country. Idahoans across the state, including myself, are taking time to acknowledge the systemic, institutionalized racism that exists in our communities. During this vigil, I am reflecting on my own privilege and examining the racism that exists at all levels of society.”

Nelson told the Daily News that court rulings have evolved over the years and have given police more freedom to use deadly force.

A UPS driver appeared to agree with Nelson as he stopped his vehicle a few minutes before the vigil started, yelled “you guys are awesome” to Fry, then continued driving.

Fry said in a City of Moscow Facebook post Wednesday that the Moscow Police Department is committed to its community policing philosophy. By 5:45 p.m. Wednesday, the post garnered 576 likes and heart emojis, 77 shares and nearly every single one of the 63 comments were positive.

“I do not and will not tolerate any use of excessive force,” Fry said.

He said the Moscow Police Department will continue to educate first, use enforcement when needed, and use legal force only when necessary. A letter from Fry to the community appears on today’s Daily News Opinion page.

“Our department values the cultural diversity of our community and we will continue to stand in the gap for all cultures,” Fry said. “As fellow human beings as well as law enforcement officers, we deplore the events which occurred in Minneapolis, which resulted in the loss of life. As I have always asked, please do not judge the Moscow Police Department by the standards of other police departments across the nation.”

“BLACK LIVES MATTER” signs were among the most popular held by attendees Wednesday. Most on hand were young people. A few other signs asked to defund police.

McDade was a 38-year-old black transgender man who was shot and killed by a police officer in Tallahassee, Fla., two days after Floyd’s death.

The Tallahassee Police Department said an officer was responding to a deadly stabbing incident May 27 when they came across McDade, who matched the description of the stabbing suspect. McDade allegedly pointed a gun at the officer, and the officer fatally shot him.

Williams said she attended Wednesday’s vigil because black lives matter and police need to be defunded and reformed.

She said people need to educate themselves and that white people, especially, need to identify their internal biases and work on them to help eliminate racism.

“(Racism) is so ingrained in the system,” Williams said. “It is horrifying.”

Johnson said he wanted to support his friends, noting his girlfriend and several of his friends are people of color.

He said calling out racism when they see it, educating others and simply being kind to everyone are steps to combat racism in the U.S.

While riots, looting and tear gas marked some protests in large cities across the country, the Moscow protest was peaceful.

Williams said protesters across the country have been peaceful but police have escalated the situations and caused the riots.

“Spraying tear gas into people who are shouting is going to cause people to panic,” she said.

Johnson said the rioting and looting are not justified and that people often mistake the looters and rioters with peaceful protesters.

“They’re standing for violence and they are taking advantage of the situation that we’re in now, using the unrest and discomfort kind of as a shadow to hide in while they commit horrible crimes,” Johnson said.