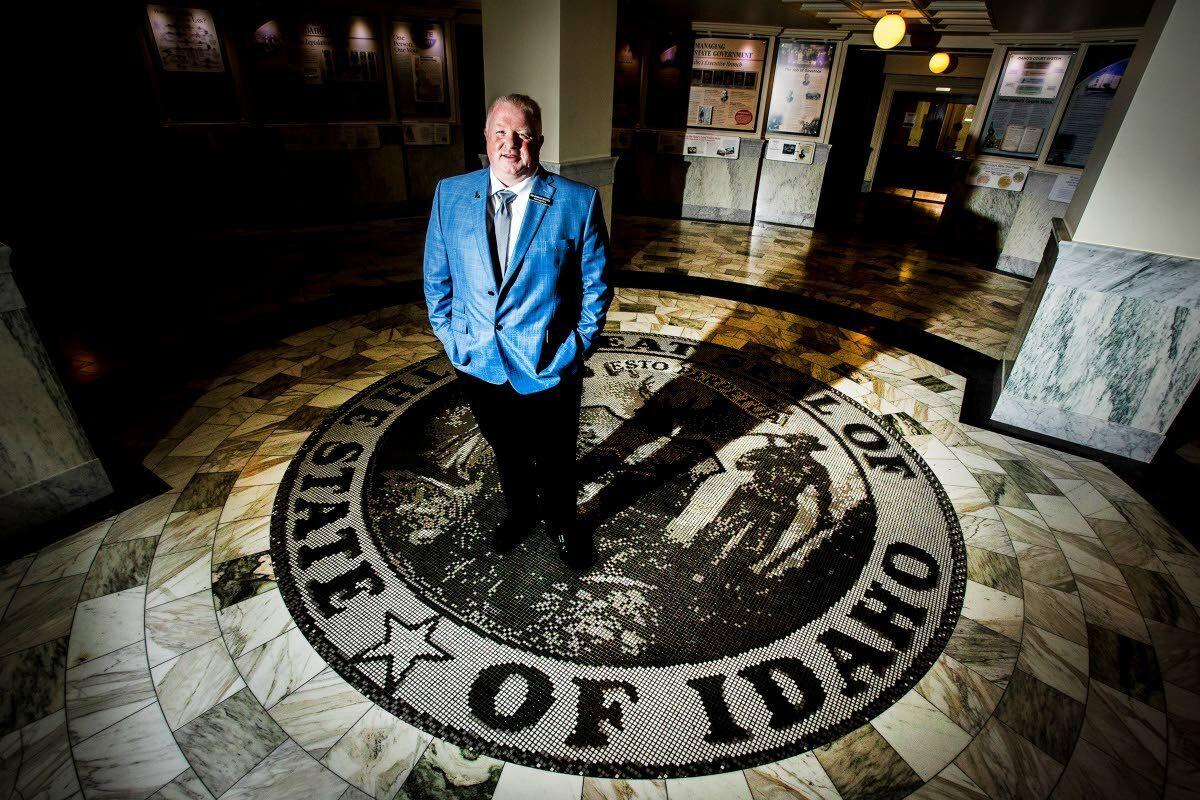 Rep. Brandon Mitchell, R-Moscow, stands atop the Idaho state seal on the garden level of the Idaho State Capitol. Mitchell said his childhood shaped his determination to make his life better. 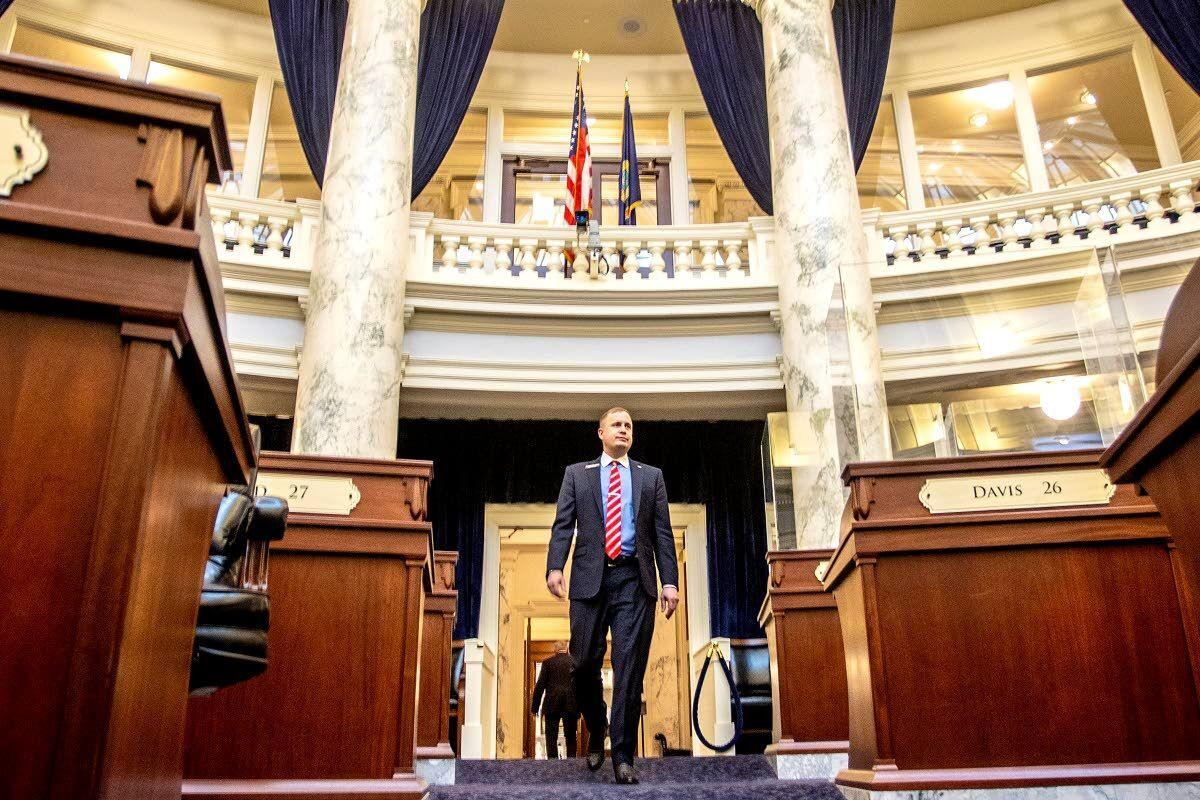 Rep. Aaron von Ehlinger, R-Lewiston, enters the house floor before the day’s session in Boise. Von Ehlinger’s U.S. Army unit was the first conventional infantry in Afghanistan after 9/11, an experience he says shaped who he is today. 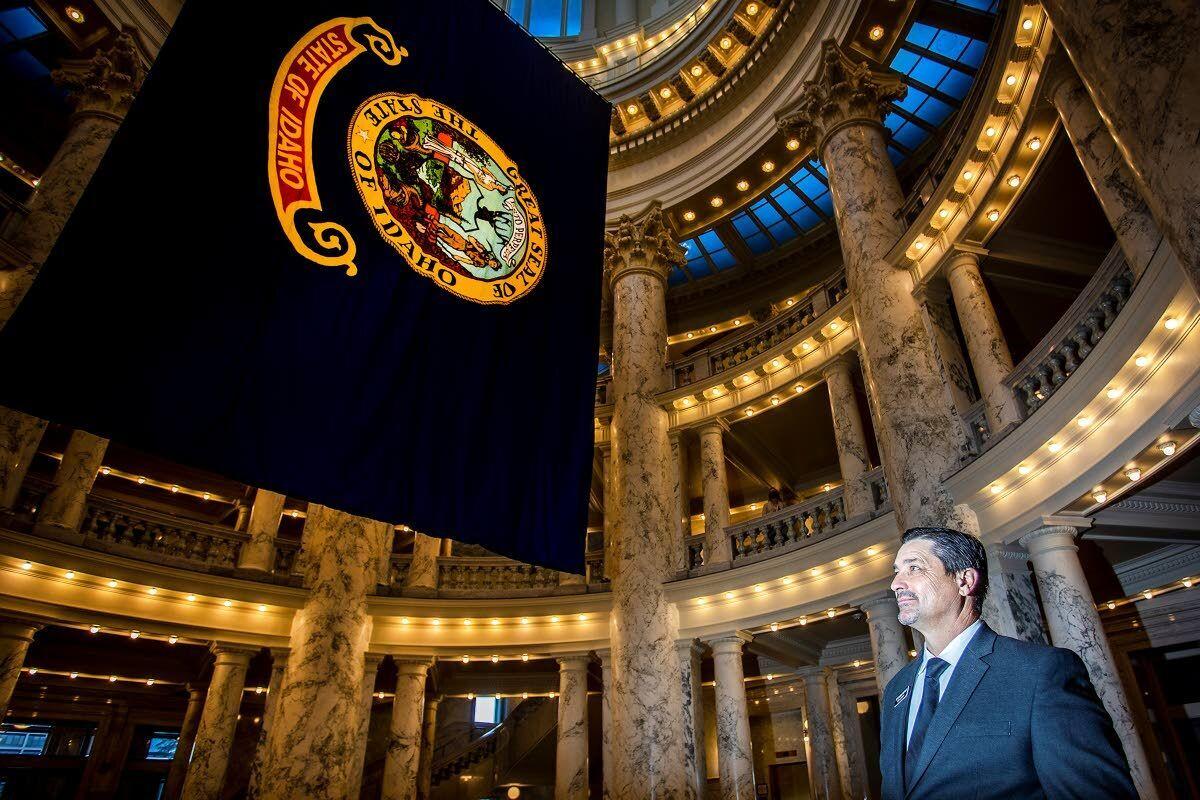 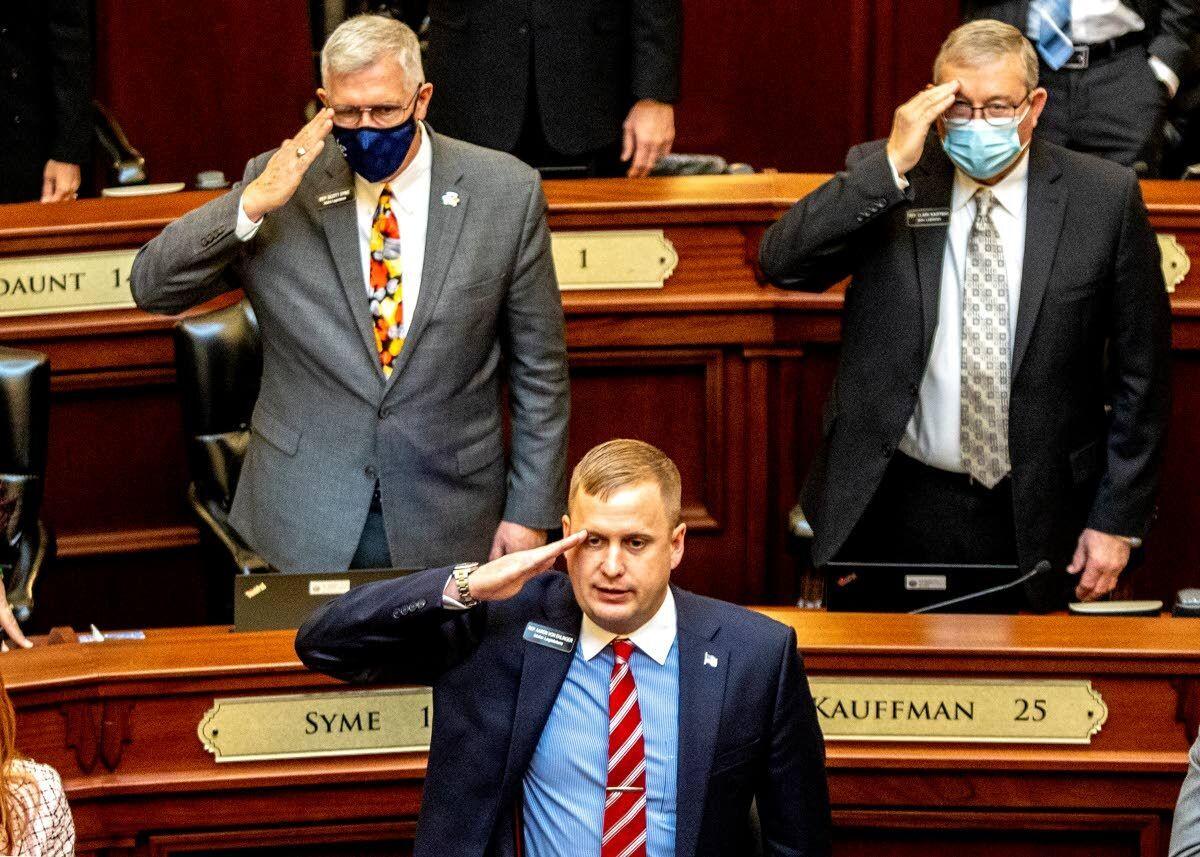 Rep. Aaron von Ehlinger, R-Lewiston, salutes during the pledge of allegiance on the House floor. 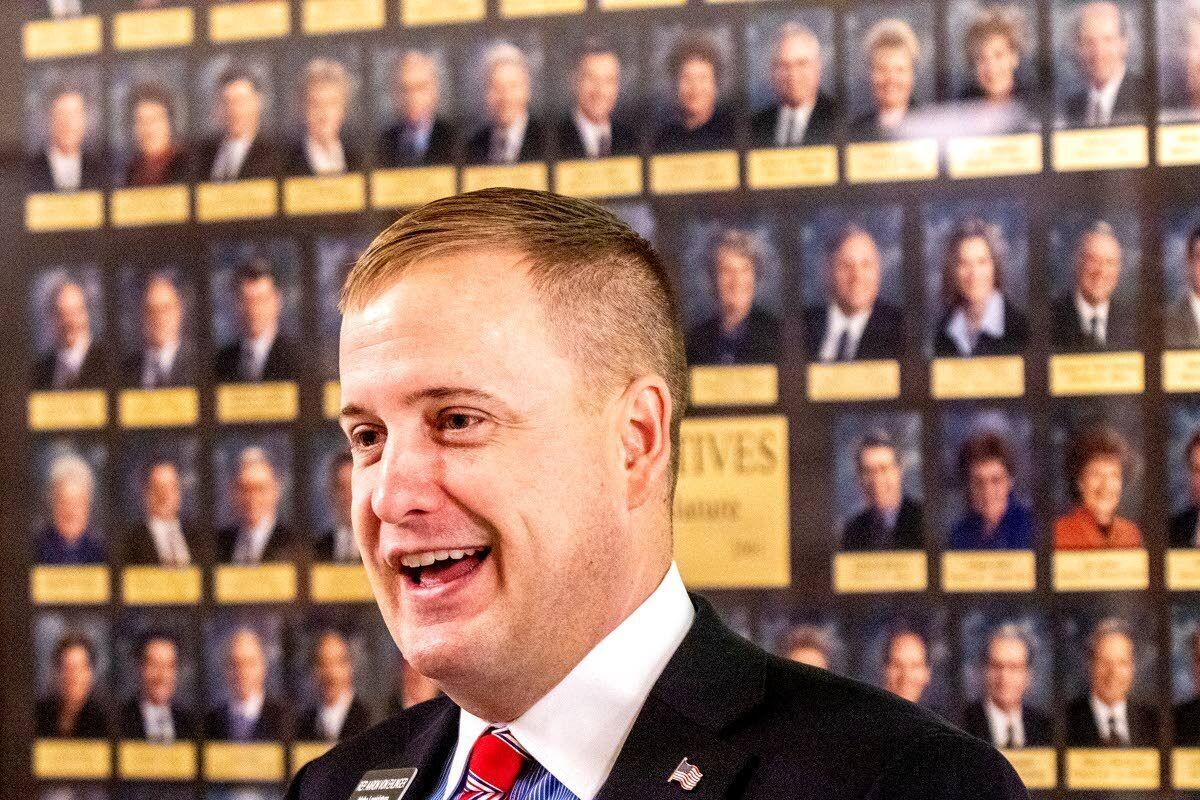 Rep. Aaron von Ehlinger, R-Lewiston, talks with colleagues in the East Wing last week, next to picture of past legislatures. 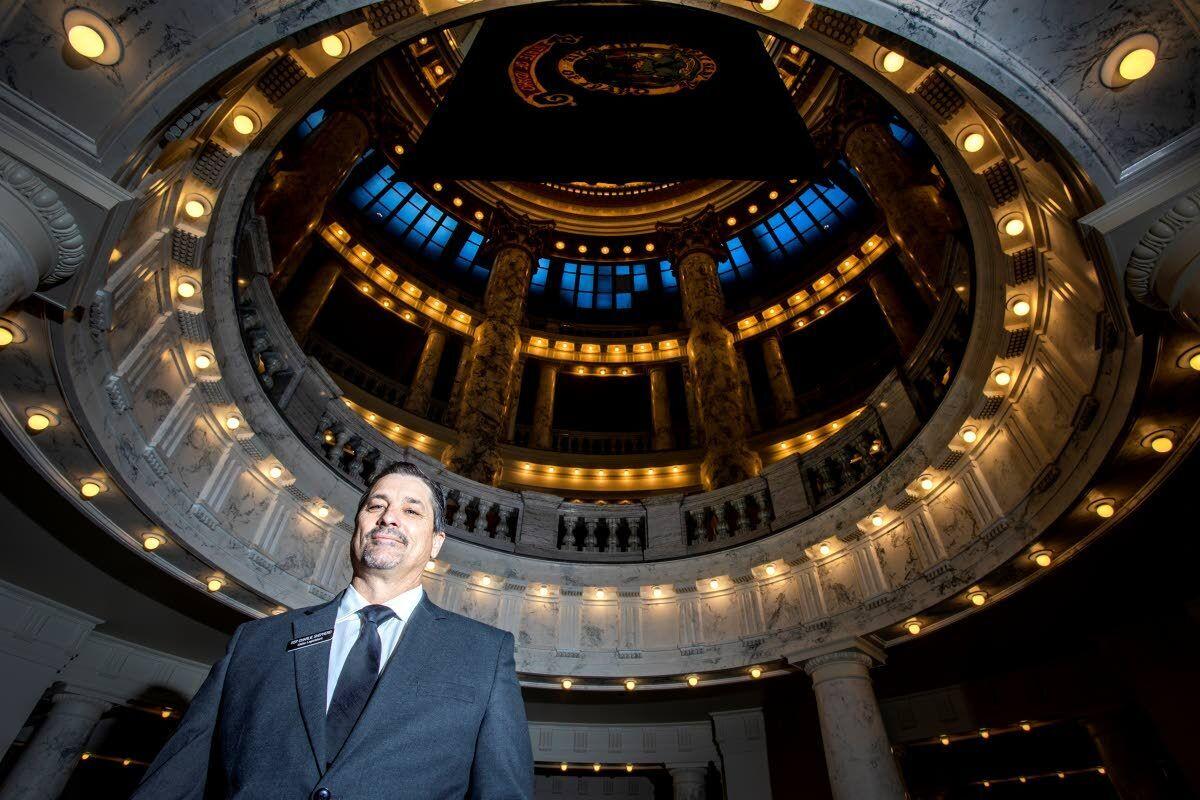 Rep. Charlie Shepherd, R-Riggins, stands under the rotunda and Idaho state flag for a portrait at the Idaho State Capitol. 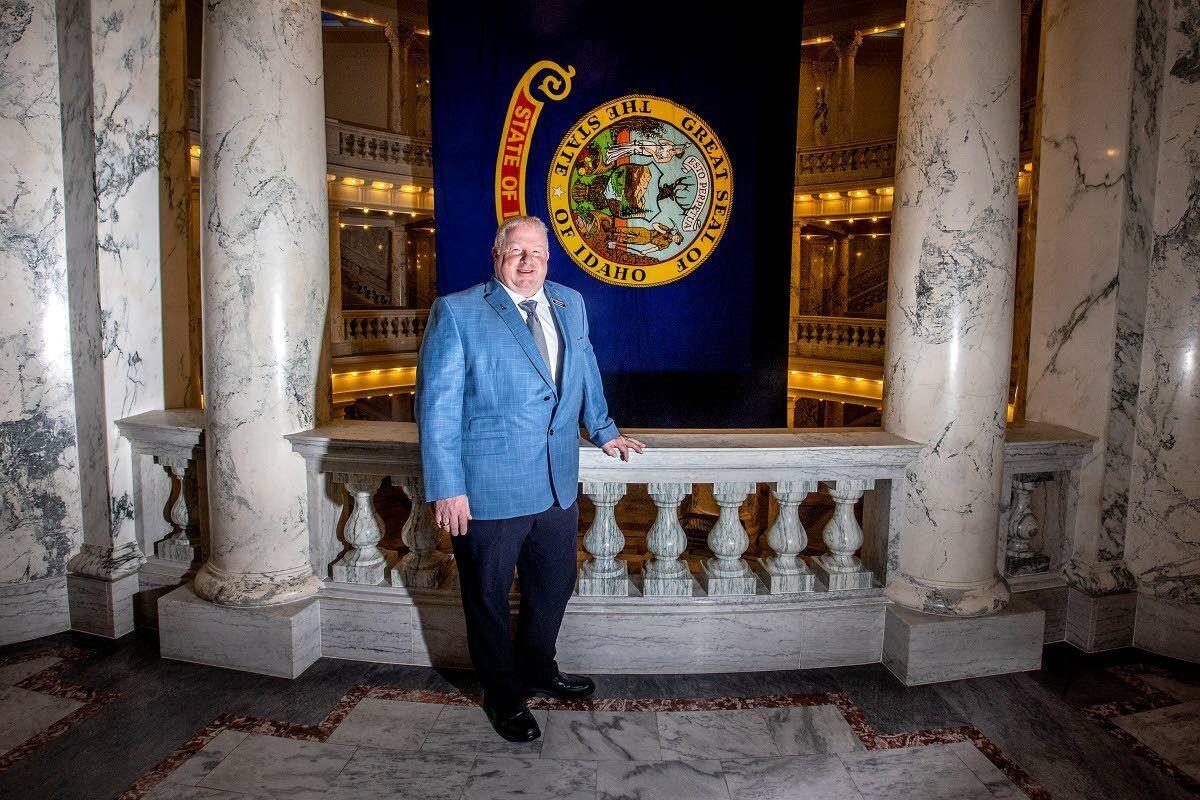 Rep. Brandon Mitchell, R-Moscow, stands in the rotunda of the Idaho State Capitol. 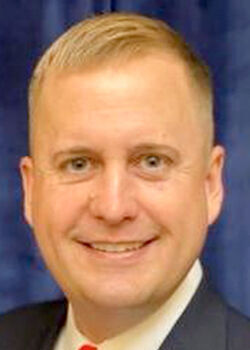 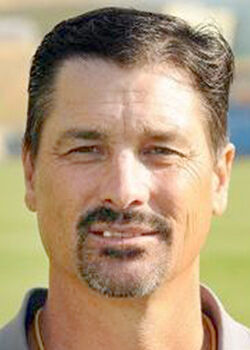 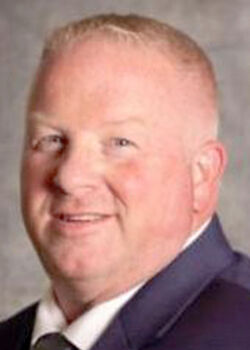 Rep. Brandon Mitchell, R-Moscow, stands atop the Idaho state seal on the garden level of the Idaho State Capitol. Mitchell said his childhood shaped his determination to make his life better.

Rep. Aaron von Ehlinger, R-Lewiston, enters the house floor before the day’s session in Boise. Von Ehlinger’s U.S. Army unit was the first conventional infantry in Afghanistan after 9/11, an experience he says shaped who he is today.

Rep. Aaron von Ehlinger, R-Lewiston, salutes during the pledge of allegiance on the House floor.

Rep. Aaron von Ehlinger, R-Lewiston, talks with colleagues in the East Wing last week, next to picture of past legislatures.

Rep. Charlie Shepherd, R-Riggins, stands under the rotunda and Idaho state flag for a portrait at the Idaho State Capitol.

Rep. Brandon Mitchell, R-Moscow, stands in the rotunda of the Idaho State Capitol.

BOISE — People often try to avoid painful experiences in life, but the bad times have been a source of inspiration for three freshmen lawmakers from north central Idaho.

Rep. Charlie Shepherd, R-Riggins, said he’s been “blessed” to have a number of unpleasant experiences in life.

“They gave me insights and gave me the strength to go on,” he said. “If you learn from adversity and use it as a tool, rather than a crutch, it can be extremely helpful in the future.”

Adversity was pretty much a childhood constant for Rep. Brandon Mitchell, R-Moscow. He grew up poor, with a single mom who he said sometimes resorted to violence.

“I wrote her a letter thanking her, because those experiences drove me,” Mitchell said. “I was kind of a wild kid, but as a senior in high school it hit me. I needed to make a change and go in a different direction.”

Rep. Aaron von Ehlinger, R-Lewiston, began his new direction in life by enlisting in the U.S. Army. He left for boot camp two weeks after graduating from high school.

“When you talk about formative experiences, it’s hard to beat the military,” von Ehlinger said. “If I’d had to do (boot camp) alone, I’m not sure I would have made it. Knowing that 60 other brave souls had signed up for the same thing was a vital part of getting through it. That camaraderie and team spirit, putting our differences aside to work together — it was a beautiful experience.”

In recent interviews, all three lawmakers shared lessons from their youth:

Shepherd has been to plenty of state championship games as a coach for Salmon River High School, but he only made it to one as a player.

Losing that game, he said, taught him how to win.

“I have zero doubt, if I hadn’t lost that game, I wouldn’t have been as successful as a coach,” he said. “I went five-for-five (in state championships) in football. If you add basketball, I was seven-for-seven.”

Shepherd was a 120-pound safety on Garden Valley’s eight-man football team when they met Council in the state championship his sophomore year in high school. They’d beaten the Lumberjacks in the semifinals the previous year, and expected to win it all this time around. But Council had a different outcome in mind.

“They put a whooping on us,” Shepherd said. “In my opinion, our coach played not to lose. He stayed in his comfort zone and used the same game plan as the year before. The other mistake we made was underestimating our opponent. We lost 40-8.”

Years later, when he became a head coach himself, that experience directly influenced his take-no-prisoners approach to the game.

“I remembered that playing it safe didn’t work out so good for me as a player,” Shepherd said. “My philosophy (as a coach) was that I wasn’t going to punt; I wasn’t going to voluntarily give the ball to the other team. The safe play, the conventional play, it’s not in my DNA.”

A star in his own movie

Ask Mitchell about the formative experiences in his life and the first thing he mentions is being a business owner.

He also talks about being a father and foster parent, about helping kids become successful in life.

The backdrop for all that is his own childhood, growing up in a small town in Utah. It was pretty much the antithesis of his life now — the rags from which he created richness.

Mitchell’s parents divorced when he was 2 years old, so he was raised by a single mom on public assistance. He can’t point to a single event that made him so determined to find a path out of that life, but by the time he graduated from high school he knew things had to change.

The business world wasn’t his first solution, though. Initially what he wanted was to be a movie star.

“I wanted to get into martial arts movies,” said Mitchell, who has a second-degree black belt in taekwondo.

During his sophomore year in high school he found an agent and started getting bit parts in movies and TV series. For example, he sat at an ice cream bar in the “Teen Angel Returns” series, and had a couple of scenes in the movie “Incident at Dark River.”

He was also a face in the crowd in the movie “Mr. Holland’s Opus,” a story about a high school music teacher and aspiring composer whose real life’s work ended up being his son and students.

That was Mitchell’s experience, as well. He got married out of high school and put aside his uncertain acting career to take care of his family. Now he owns six Jiffy Lube franchises, has an adopted and a foster daughter and a son who serves as his district manager.

While he can’t point to a specific incident that made him pursue a different path in life, Mitchell can point to the day when he realized he’d put his past behind him.

“It was the moment my wife and I decided to get sealed in the Temple,” he said.

Unlike “till death do us part,” getting sealed within the Mormon faith means the couple is wed for eternity. It means they’ve accepted their place in God’s plan.

“It’s a decision that you want your family to last forever,” Mitchell said.

Staying out of the kitchen

Von Ehlinger didn’t necessarily want to be a movie star when he was a kid, but his interest in action movies certainly influenced his path in life.

“I was a child of the ‘80s and ‘90s,” he said. “War movies were popular, and learning about all the different wars, I thought the greatest thing a man could do is serve his country in a serious way. For me, that meant volunteering for the airborne infantry.”

Von Ehlinger enlisted in the U.S. Army’s delayed entry program when he was 17, and left for Fort Benning, Ga., right out of high school.

“I originally wanted to be a Marine, but they wouldn’t guarantee you a job,” he said. “I didn’t want to end up as a cook, so I joined the Army. They guaranteed me airborne school. That was the real deal.”

Von Ehlinger, who grew up in Orofino, arrived at Fort Benning and immediately began to sweat — both from the heat and humidity and from the intense physical activity.

“There was no A/C in the barracks, and the first few weeks I’d wake up in a pool of sweat,” he said. “We’d get up at 5 a.m. and go running, do pushups, go on long road marches.”

“We were the first conventional infantry in Afghanistan after 9/11,” he said. “That experience changed my life forever. Being at war was the most alive I’ve ever felt. Your life is on the line; you aren’t protected by any laws. That just switched a gear in my head. After I got out of the military, I started paying more attention. It was really a catalyst for me to get involved in politics.”

Although von Ehlinger still misses the military, he was wounded in Afghanistan, which precluded him from reenlisting. After getting an honorable discharge, he earned a degree from the University of Alabama before returning to Idaho.

“Now I serve people in a very different uniform,” he said.

The new class of lawmakers

The freshman class for the 2021 legislative session includes 18 first-time lawmakers, plus seven others who either moved from the House to Senate or who returned to office after an absence.