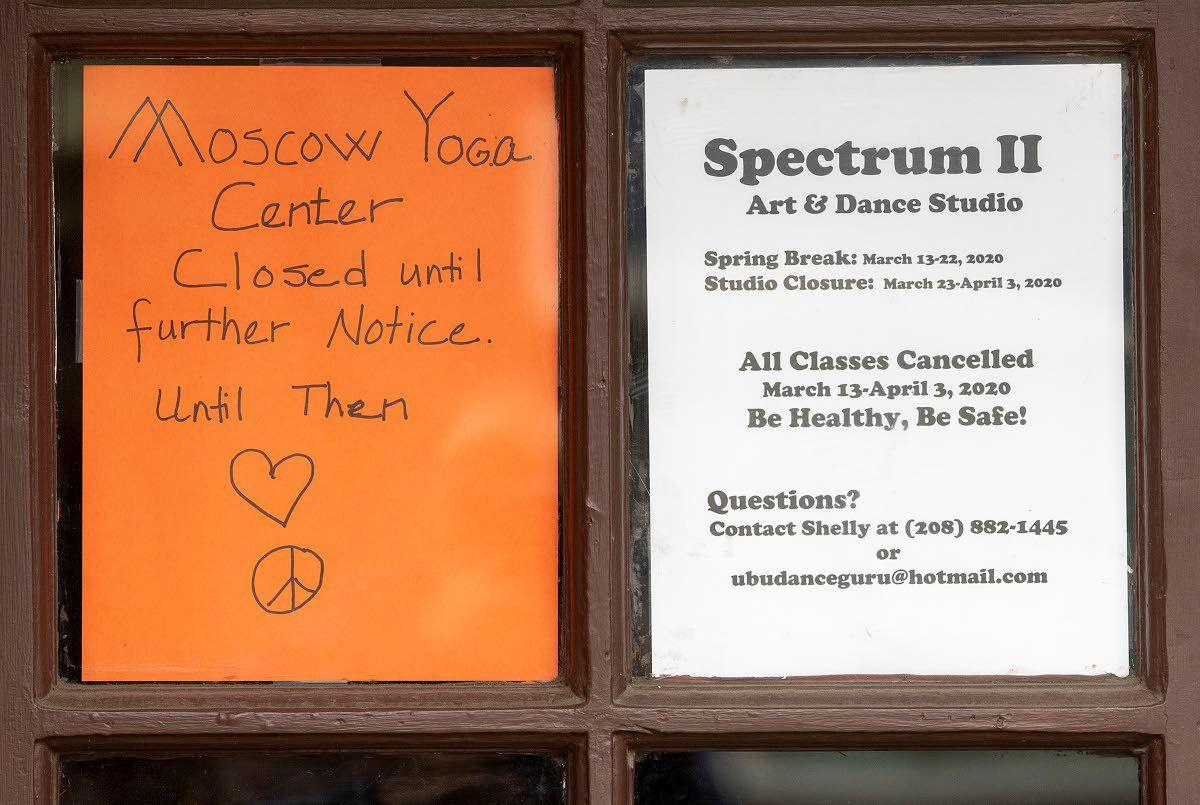 Geoff Crimmins/Daily NewsABOVE: Moscow Kula Yoga teacher Karen Faunce sits quietly during an online yoga class on Friday from her home. Classes are being taught online because of the COVID-19 coronavirus. BELOW: A sign outside the Moscow Yoga Center on Friday states that business is closed until further notice because of the coronavirus. 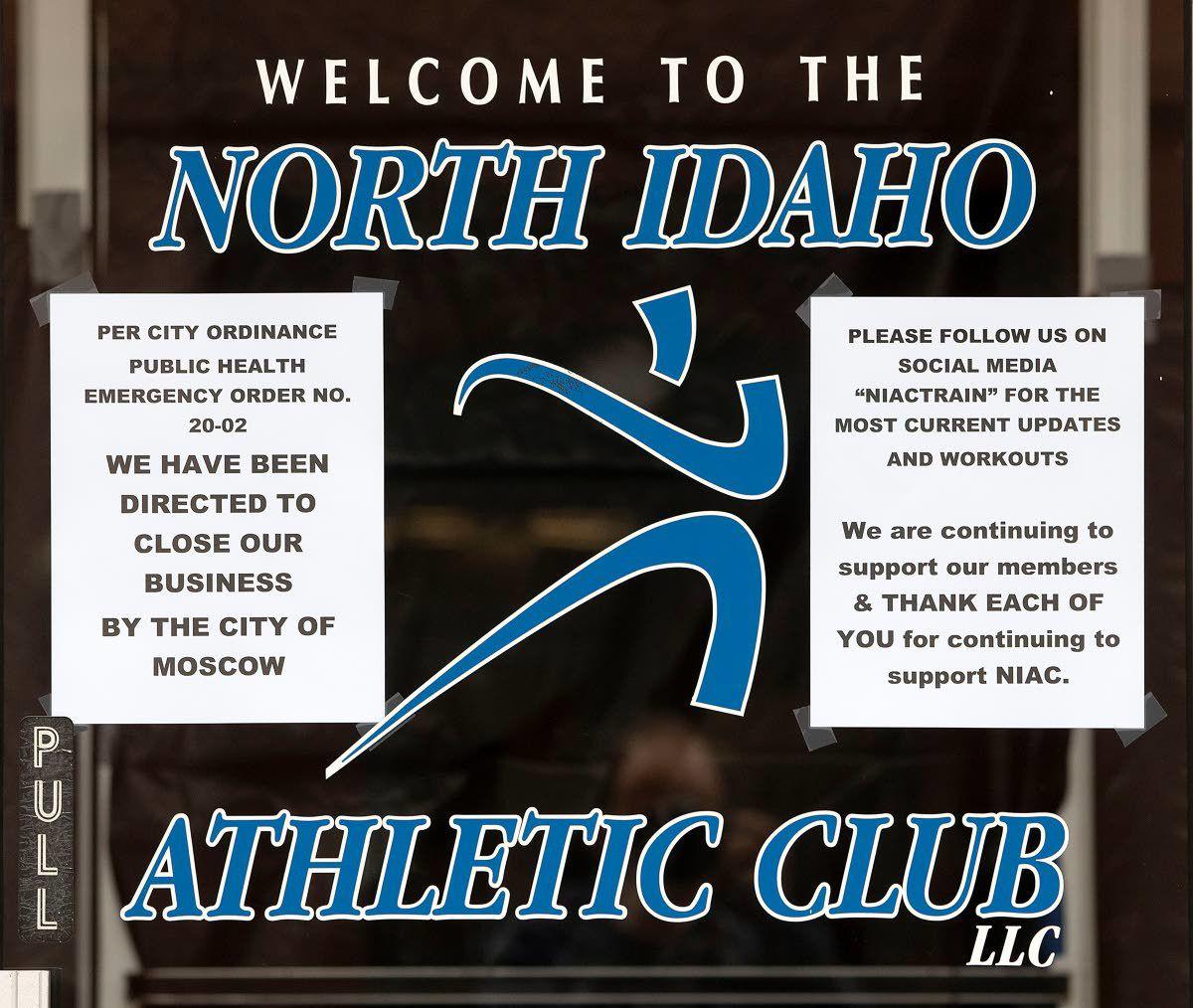 A sign on the door of the North Idaho Athletic Club explains that the business is temporarily closed.Geoff Crimmins Daily News 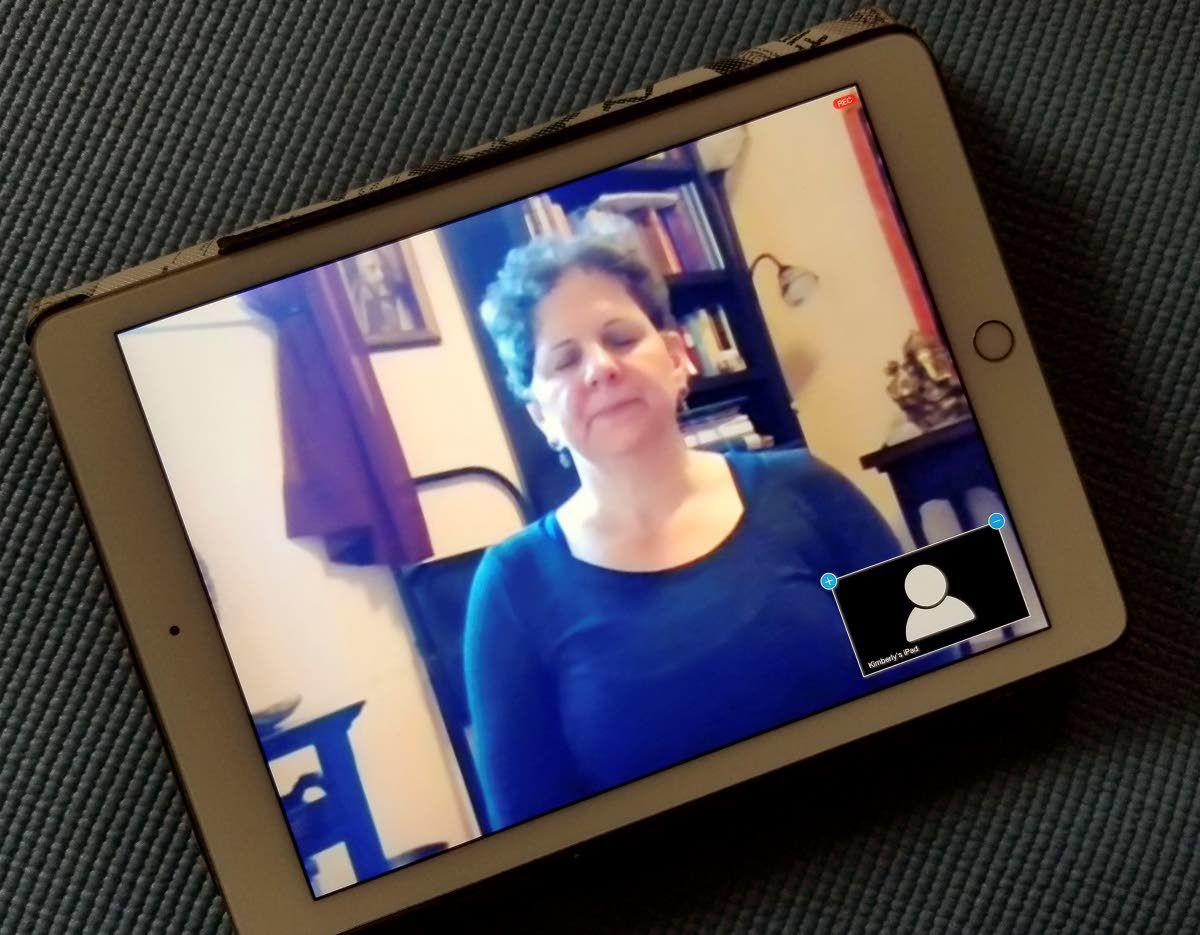 Geoff Crimmins/Daily NewsABOVE: Moscow Kula Yoga teacher Karen Faunce sits quietly during an online yoga class on Friday from her home. Classes are being taught online because of the COVID-19 coronavirus. BELOW: A sign outside the Moscow Yoga Center on Friday states that business is closed until further notice because of the coronavirus.

A sign on the door of the North Idaho Athletic Club explains that the business is temporarily closed.Geoff Crimmins Daily News

With municipal and state orders shuttering all nonessential businesses in Idaho in a bid to curb the spread of the new coronavirus, affected Moscow businesses are diving into ways to deliver at least some of their services online.

On Wednesday, Gov. Brad Little issued a statewide stay-at-home order and told businesses not deemed as essential to shut their doors for at least 21 days, though that could be extended. The closures are also required across the state line in Washington.

Nonessential businesses include recreation facilities, entertainment venues, most retail stores and even barbers and nail salons. With news on the virus and closures changing by the day — and at times by the hour — local businesses said they had to move quickly to adapt.

Madi Hull, owner of Kula Yoga on Moscow’s Main Street, said at first they were just thoroughly sanitizing their space, but in a short amount of time it became apparent they would have to move instruction online.

“We did it pretty fast and I’m grateful that, with my business, all my teachers were willing to do everything online. The transition has been pretty seamless considering what’s going on right now,” Hull said. “We definitely have less people who are attending our online classes but I know a lot of small business owners in the community who are doing a lot worse than I am.”

Nearby, at Northwest Wado-ryu Karate dojo, owner Chris Schwartz said he’s actually busier than ever. He said in addition to moving all of their regular classes online, his dojo also is offering free, online classes with a live instructor every day in a series called the Kicking Boredom training sessions.

“The classes are a full hour long although we are looking at possibly shrinking that and adding more classes because we’ve had a lot of requests,” Schwartz said. “The kicking boredom program is three classes a day Monday through Friday and then on top of that, we have four classes every evening for our regular student population.”

While the physical location is closed, Keeney Bros Music Center has begun offering music classes via teleconference as well. Sara Ziemann, who works at Keeney Bros and teaches piano, saxophone and flute lessons, said what started out as a strategy to maintain instruction for existing students is now being offered to anyone in the community who would like to brush up on their musical skill.

“It’s a little weird not to be in person with the students. I think there’s a lot less dialogue — video conferencing with somebody in general is just a little awkward,” Ziemann said. “But then we also got a lot done — I was actually surprised, It was really pretty effective.”

Even with online classes, the music store expects to take a financial hit during the closure. Hull said Kula is also anticipating a drop in revenues but she hopes the community will rally to support their local businesses however they can.

“Definitely we will take a little hit — it’ll be tough to make ends meet for a few months and the summer is usually pretty rough for the studio anyway,” she said. “But I have a ton of community support and I started a GoFundMe at the same time that I started our (online classes).”

Schwartz said when they first started delivering online classes he expected to see parents in the background. However, once they got started, it became apparent the classes gave moms and dads some well-earned free time while their child participates in coordinated physical activity under the supervision of an adult.

They also burn a lot of energy, Schwartz pointed out, which is essential for children when they have a lot of down time but not a lot of physical activity in their day. As Schwartz puts it, “Kids pent up inside all day are springs that are pinched all the way down.”

Hull said yoga also has benefits for its quarantined participants — for one, it’s just an objectively healthy activity for both the body and the mind. She said something as seemingly simple as breathing exercises can help people keep calm while they contend with the crisis

Even online music classes can be a chance for a little catharsis in trying times, Ziemann said.

“It’s something that I legitimately believe in, that this will make your life better and help you through this time,” she said. “Some of my students have told me playing music is the only time that they feel in the flow and disconnected from their inner dialogue and able just to go and play.”

Those who wish to know more about online classes or how to lend their support can find out more at each business’s individual Facebook page.