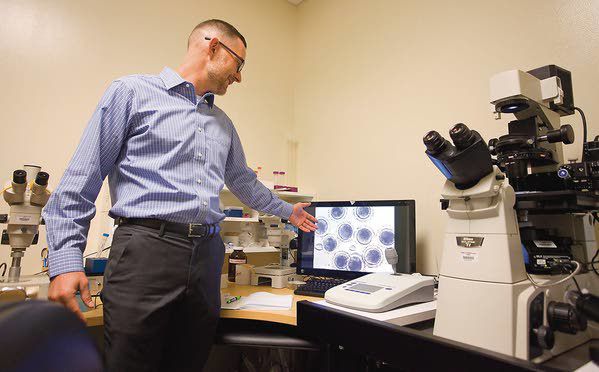 Professor of Molecular Biosciences Jon Oatley talks about a microscopic image of pig zygotes that are being genetically modified in a laboratory on Thursday at Washington State University in Pullman. 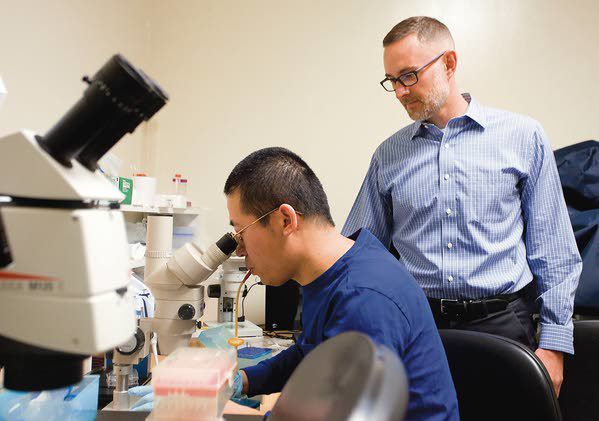 Professor of Molecular Biosciences Jon Oatley talks about a microscopic image of pig zygotes that are being genetically modified in a laboratory on Thursday at Washington State University in Pullman.

After spending 10 years in Thailand as a child, Jon Oatley, director of the Center for Reproductive Biology at Washington State University, developed a passion for ending food insecurity around the world.

Originally from Utah, Oately returned to the states as a teenager, moving to a tiny ranching town in Nevada called Gardnerville.

"There, the big culture was agriculture, as you can imagine - rural Nevada, lots of cattle ranching and other livestock," Oatley said. "I decided that I wanted to be involved in that, and I think my father also wanted me to learn about hard work."

Through friends and other avenues, Oatley said he landed a summer job handling cattle for local ranchers.

"That piqued my interest in animals and how to make animals through reproductive processes," he said.

Oatley later turned that passion into a bachelor's degree in animal science from the University of Nevada at Reno. After hearing about WSU's graduate program researching reproductive function in cattle, Oatley came to Pullman, earning a doctorate in animal reproduction and later a postdoctoral degree in stem cell biology and genetic engineering - much to his surprise.

Oatley said his time in Thailand opened his eyes to the far-reaching effects of hunger and poverty.

"It was ingrained in me, a little bit, in that experience of living in Southeast Asia, that I wanted to be part of, 'How do we make food better for people? How do we produce enough of it so that everybody has access to cheap, safe, nutritious food?' " Oatley said. "I think I saw cattle ranching as one way to do that."

While much of Oatley's research is focused on ending hunger in impoverished regions of the world, it has applications even along the Palouse.

"We're trying to improve through genetic processes the efficiency by which animals grow and produce products so that we can put less water into them, we can put less amount of feed whether that's grasses, hays, grain, whatever it is," Oatley said. "For thousands of years, we haven't been able to tap into the genetics in a really precise and unique way that we can now."

One method Oatley and his team of researchers use to improve the genetics of food-producing cattle is through gene modification rather than more traditional methods, like selective breeding.

"What we can do now is we can use sophisticated tools, molecular tools, to really refine and enhance the genetics of an animal for them to have the traits that we want," Oatley said. "We can make leaps in improving the health, growth and well-being of animals, compared to the baby steps that we've been taking for thousands of years."

"We are going to have 10 billion people on Earth before the year 2050. In the next 30, 40 years, we will double the number of people we have on Earth. And we don't have the resources to double the amount of food that we produce right now," Oatley said. "We have to find a way to do things differently, more efficiently, so we can provide food to the increasing world population at today's nutritional standards. I'm hoping that our research is one of the ways we can do that."

The use of GMOs for food production remains a hotly debated topic in America, but Oatley said it's one subject many consumers simply don't have enough information on.

"A lot of people are scared of things they don't know," Oatley said. "Part of the reason that people are uninformed or lack in understanding what we do from a genetic modification standpoint is because as academic scientists, we've been really bad at helping to educate the public."

That's why Oatley volunteers as a presenter for WSU and Palouse Discovery Science Center's Science Pub, a series of talks hosted by scientists on an array of topics with the goal of educating the public. The series is hosted monthly at Paradise Creek Brewery in Pullman.

Oatley said he hopes public outreach will help give Americans the necessary tools to make decisions for their families based on factual information instead of scare tactics.

"I'm not on a mission to change people's opinions," Oatley said. "I just want to make sure they have accurate, true, valid information."

The lab's goal is to reduce the number of people who have an empty stomach, Oatley said, and he aims to make that easier for Americans to understand.

"In the United States, particularly North America, people are developing their opinions about genetic modification with a full stomach," Oatley said. "People sometimes need to take a step back and realize that they're making their opinions in a very different context than somebody else in a different region of the world."