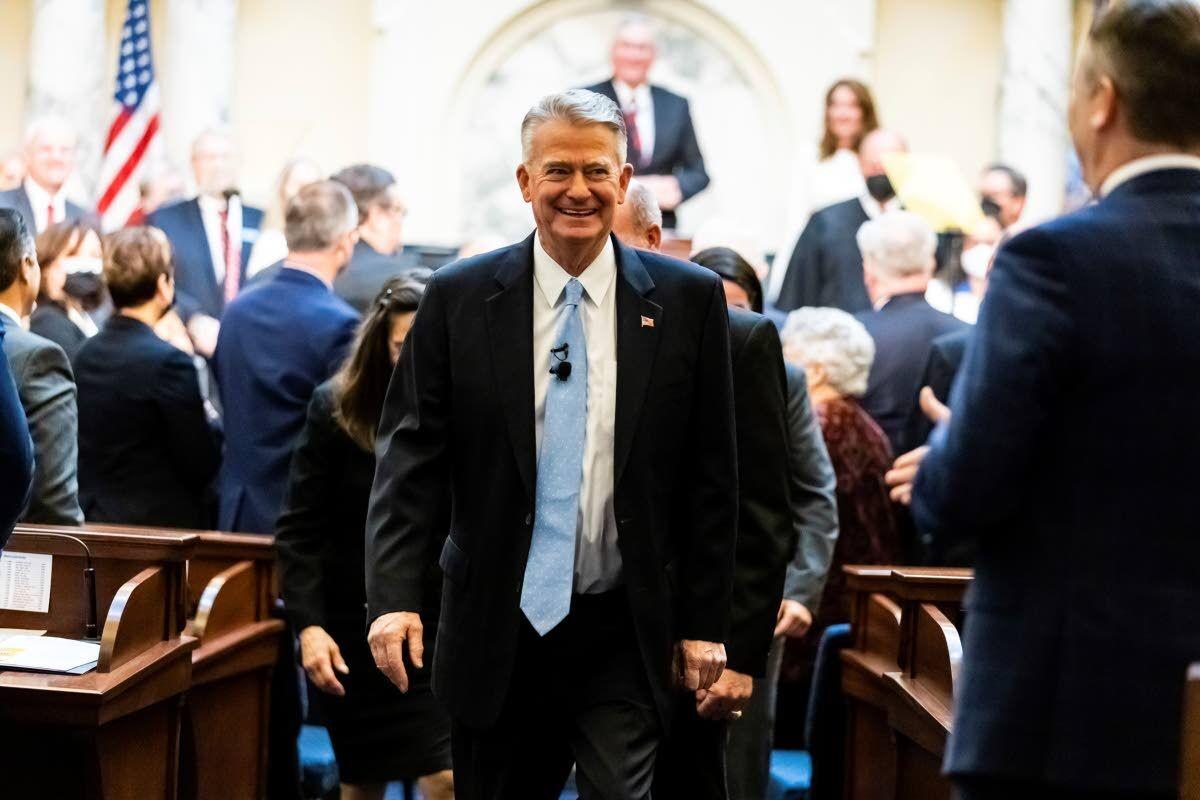 Courtesy Otto KitsingerIdaho Gov. Brad Little leaves the house chambers Monday after he delivers his State of the State address at the state Capitol in Boise. 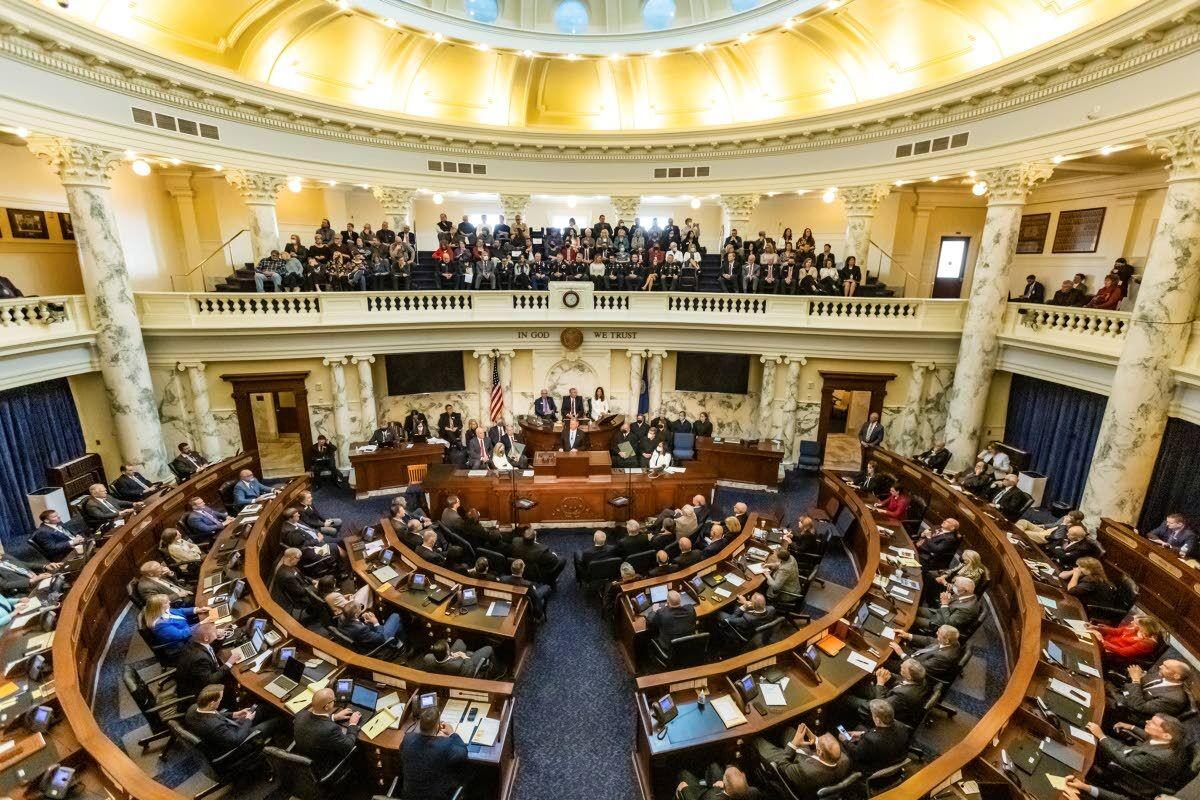 Idaho Gov. Brad Little delivers his State of the State address Monday inside the house chambers at the state Capitol building in Boise, Idaho. 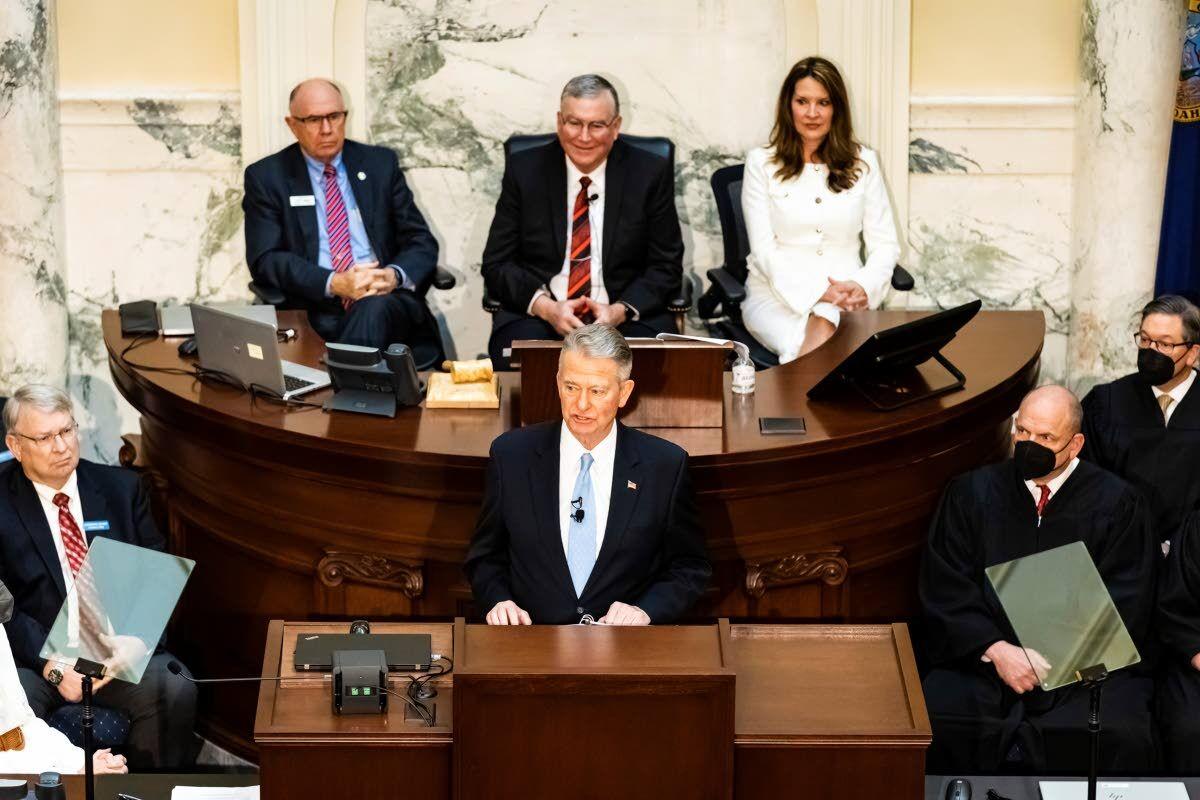 Idaho Gov. Brad Little delivers his State of the State address inside the house chambers Monday at the state Capitol building in Boise, Idaho. Behind him are Senate Majority Leader Chuck Winder, R-Boise, Speaker of the House Scott Bedke, R-Oakley, and Lt. Gov. Janice McGeachin.

Courtesy Otto KitsingerIdaho Gov. Brad Little leaves the house chambers Monday after he delivers his State of the State address at the state Capitol in Boise.

Idaho Gov. Brad Little delivers his State of the State address Monday inside the house chambers at the state Capitol building in Boise, Idaho.

Idaho Gov. Brad Little delivers his State of the State address inside the house chambers Monday at the state Capitol building in Boise, Idaho. Behind him are Senate Majority Leader Chuck Winder, R-Boise, Speaker of the House Scott Bedke, R-Oakley, and Lt. Gov. Janice McGeachin.

BOISE — Gov. Brad Little wants to use a historic budget surplus to make record investments in Idaho’s K-12 education system, as well as its transportation and water infrastructure.

That would be an ambitious agenda for any legislative session, at least in a normal year.

However, with an updated revenue forecast showing a possible $1.9 billion surplus in fiscal 2022, Little thinks there’s room to do more. On top of everything else, he’s proposing the largest tax cut in state history.

“My friends, I stand before you today with great optimism and excitement about the once-in-a-lifetime opportunity before us,” he said Monday, during his State of the State address. “My budget pays off state building debt, saving taxpayers tens of millions of dollars in interest payments. My budget also puts us on a path to pay off all known deferred maintenance needs … over the next 10 years. And my budget bolsters our rainy-day (savings) to record levels, putting more than $1 billion in the bank to guard against future downturns.”

The State of the State address marks the beginning of the 2022 legislative session. The governor will now spend the next few months meeting with lawmakers behind the scenes, trying to shepherd his recommendations through a Legislature that has its own budget and policy priorities.

“The governor has given us his recommendation,” said House Speaker Scott Bedke, R-Oakley. “Basically he’s said, ‘Tag, you’re it’ to the Legislature.”

In his revised 2022 and new 2023 budget proposals, Little recommends the Legislature allocate nearly $1.7 billion of the projected $1.9 billion surplus.

Some of that money comes from one-time savings. Much of it, though, reflects growth in general fund revenue collections that should be ongoing.

The governor wants to use the one-time funding in fiscal 2022, which ends June 30, for things like deferred maintenance projects, paying down debt and boosting state savings accounts. The ongoing revenue would be spent in fiscal 2023, primarily to boost education funding.

Details on his budget proposals include:

More than 130 years ago, Little said, the founders of Idaho “recognized that the stability and endurance of our republican form of government depends mainly on ‘the intelligence of the people.’ ”

To advance that goal, he’s recommending the largest investment in K-12 education in state history — $1.1 billion over the next five years.

In fiscal 2023 alone, the governor is proposing a $300 million, 11% increase in public school support. That includes a $104 million, 10% pay raise for teachers. Classified staff would receive a 5% increase.

The governor is also recommending a $1,000 bonus for all teachers this year, to reflect increased workloads during the pandemic.

The 2023 budget includes an additional $47 million for literacy programs. Alex Adams, the governor’s budget director, said school districts would have the flexibility to use those dollars to provide optional all-day kindergarten services, or to pay for alternative literacy programs.

Another $105 million would go toward boosting state funding for health insurance premiums for teachers and classified staff. Given that some districts use supplemental levies to cover those premium costs, this move could result in some local property tax relief.

Little is proposing a 7.1% increase in state support for colleges and universities, as well as a 4.8% increase for community colleges.

Instead, he proposes $200 million in ongoing general fund support to address state and local deferred maintenance needs. Local governments would get 40% of that, or $80 million, with the remainder going toward state projects.

Simultaneously, local governments would receive another $200 million in one-time funds to upgrade their aging bridge infrastructure. The governor estimates this would allow them to address about a third of their bridge maintenance backlog.

The state dollars would be augmented by an additional $117 million in highway and bridge funds from the federal Infrastructure Investment and Jobs Act.

Noting that the cumulative tax burden has already been cut by nearly $1 billion during the first three years of his term, Little said he now wants to “double down” on that by approving another $600 million cut this year and next.

His proposal combines a one-time tax rebate worth $350 million this year with an ongoing $251 million reduction in income tax rates that would take effect next year.

If approved, Little said, this would save Idaho taxpayers another $1.5 billion through fiscal 2026.

“There’s no better feeling than giving back to hardworking Idahoans more of what they earned,” he said. “Some say we shouldn’t cut taxes, that we have to choose between cutting taxes and meeting important needs. This is false. My budget shows we can do both. We can spend less than we bring in, offer tax relief and fund the top priorities — education and infrastructure.”

Almost as an after-thought, the governor mentioned he wants to freeze the base rate for unemployment taxes, which would save Idaho businesses $64 million over the next two years.

Overall, Little recommends the original 2022 budget be increased from $4.22 billion to $4.53 billion. There would be some one-time transfers on top of that, both to decrease state debt and to augment state savings accounts.

For fiscal 2023, the governor is proposing $4.56 billion in total general fund expenditures. That would be an 8.1% increase over the original ’22 budget.

The Legislature’s joint budget committee will take Little’s recommendations into consideration as it begins to craft its own budget bills in February.

BOISE — It must have felt like “Home on the Range” for Idaho Gov. Brad Little on Monday, for nary was heard a discouraging word.