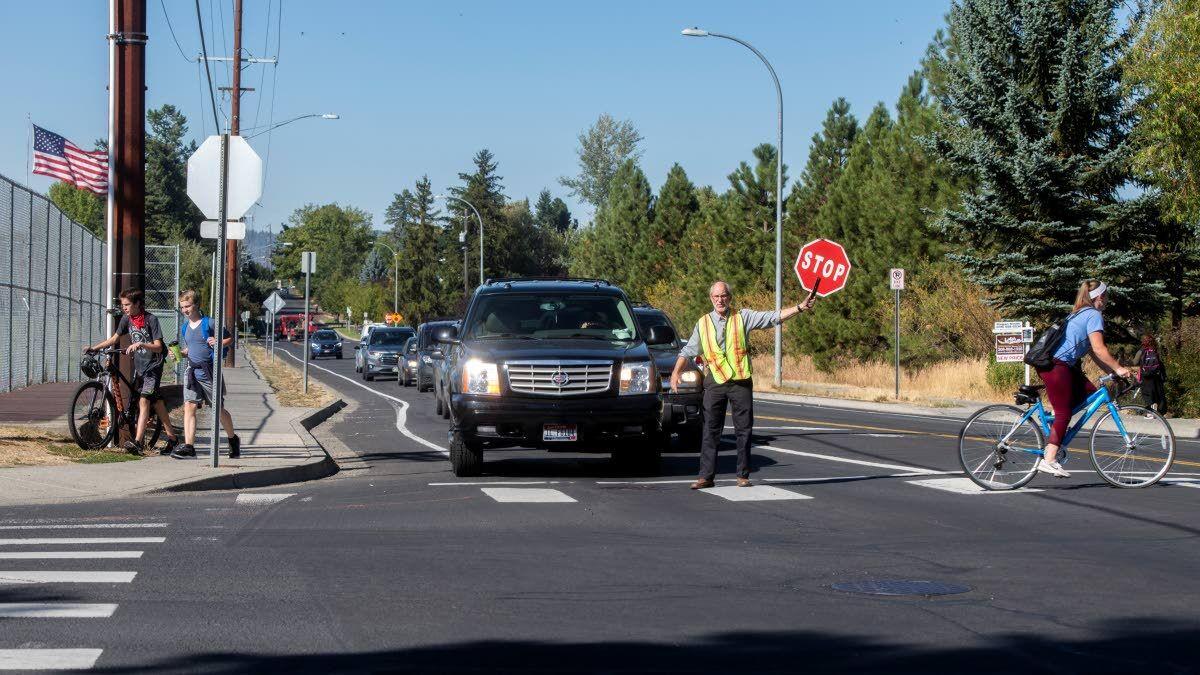 Charlie Gerke helps young students cross the intersection of D Street and Mountain View Road as traffic begins to pile up Tuesday afternoon in Moscow. When asked about the daily surge of traffic at the intersection, Gerke said, “There’s too many cars going in too many directions. We’ve all had close calls.” 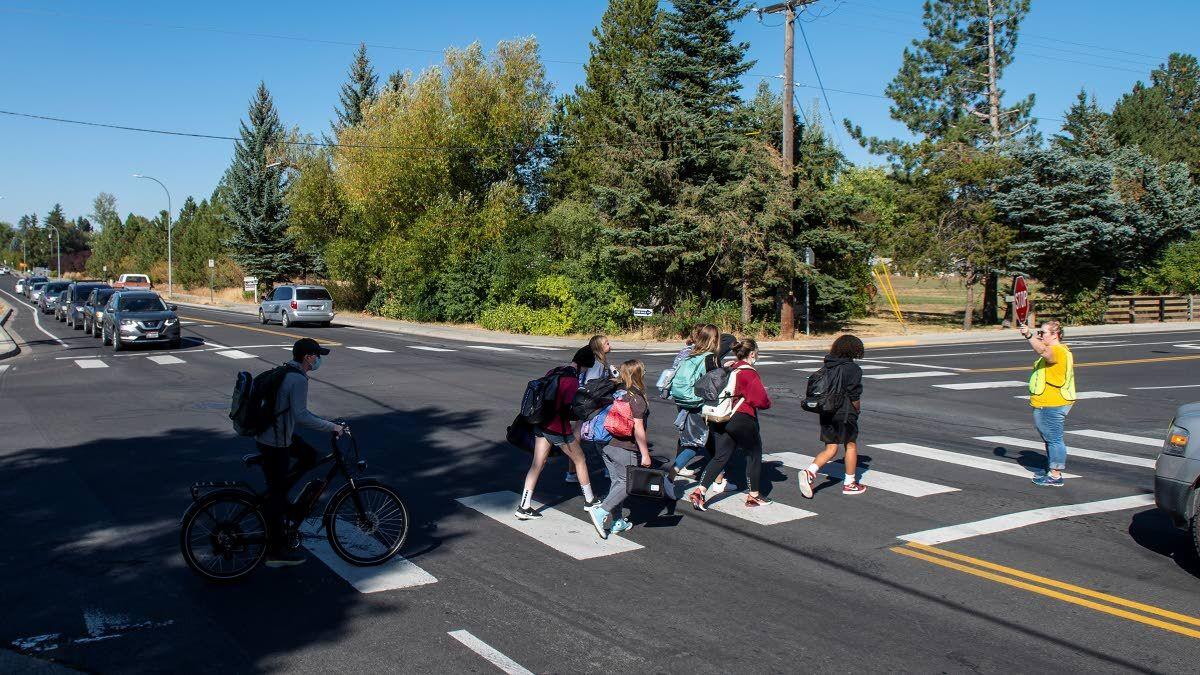 Erin Bacon, the program coordinator for Safe Routes to School, helps young students cross the intersection of D Street and Mountain View Road as traffic begins to pile up on Tuesday afternoon in Moscow. “I want this intersection to be safe for everyone,” said Bacon.

Charlie Gerke helps young students cross the intersection of D Street and Mountain View Road as traffic begins to pile up Tuesday afternoon in Moscow. When asked about the daily surge of traffic at the intersection, Gerke said, “There’s too many cars going in too many directions. We’ve all had close calls.”

Erin Bacon, the program coordinator for Safe Routes to School, helps young students cross the intersection of D Street and Mountain View Road as traffic begins to pile up on Tuesday afternoon in Moscow. “I want this intersection to be safe for everyone,” said Bacon.

The city of Moscow will temporarily close left-turn lanes at the intersection of D Street and Mountain View Road next week in a bid to increase pedestrian safety in an area many children use to walk to school.

The shift, being made at the request of the Moscow School District, will last 90 days and transportation officials said they plan to monitor the effectiveness of the measure as a potential long-term remedy to the dangerous pedestrian crossing. The intersection is bordered by Moscow Middle School and Eggan Youth Center, and within blocks of the Hamilton-Lowe Aquatics Center and McDonald Elementary School.

Safe Routes To School Program Coordinator Erin Bacon said the four-way stop, with a left-turn lane on each side of the intersection, has always been problematic during the peak times in mornings and afternoons when students are walking or biking to and from school. She said her organization did a parent perception survey of the crossing in 2017 and parents said a major barrier keeping parents from allowing their children to walk to school that came up again and again was the intersection of D and Mountain View.

“There have been a lot of close calls out there at that intersection, for the crossing guards in particular, and it really results from eight cars being ready to go at that intersection,” Bacon said. “Nobody knows whose turn it is, half the people are waving other people on, because it’s Moscow and everybody’s nice, and it just gets really confusing and it compounds because then people start getting antsy (and) they start getting frustrated.”

Moscow Superintendent Greg Bailey said he has personally seen some close calls at the intersection, and while crossing guards do what they can, it’s difficult to manage so many vehicles and the left-turn lanes only exacerbate the confusion. He noted a student was struck by a vehicle in a crosswalk at D and Mountain View a few years ago, and while the student was unhurt, the danger to other pedestrians remains.

“What I’ve seen down there is extremely long lines of cars in the mornings, as well as people not being as careful as they possibly can, with not only our crossing guards, but the young kids,” Bailey said. “We just want to make sure that that crossway is safe for our students.”

Deputy City Supervisor Bill Belknap said the elimination of left-turn lanes is a cost effective and relatively easy-to-implement solution to the problem. He said while the intersection works well the majority of the day, he said there is a huge increase in pedestrian and vehicular traffic at peak times before and after school.

Belknap said more costly solutions include installing a traffic light or roundabout at the intersection, but reducing the number of lanes in need of management at the stop from eight to four would be much cheaper to implement, and easier to remove if it is ineffective.

He said city employees will monitor the stop before and after installation of the measure to see if the change really does help quell some of the risk, and will interview crossing guards, and others about their perception of the change.

Bacon said the hope is that the move will not increase stress on traffic, but will actually allow traffic to move more smoothly because it will be less confusing.

Belknap said while it’s possible removing the turn lanes will result in longer lines of cars stretching down Mountain View Road and other nearby thoroughfares during peak traffic hours, he said it’s likely that traffic will move through just as quickly as if they were there.

“You don’t get a lot of additional throughput capacity (from turn lanes) and traditionally, turn lanes are trying to pull people out of the through lane of travel,” he said. “It’s not that it’s unusual to see those at a four-way stop, but I don’t know that they provide the capacity increases that you would traditionally see and they do potentially introduce additional confusion with perspective to who has the right of way.”

Jackson can be reached by email to sjackson@dnews.com.

Her View: Safety of children is worth the added wait