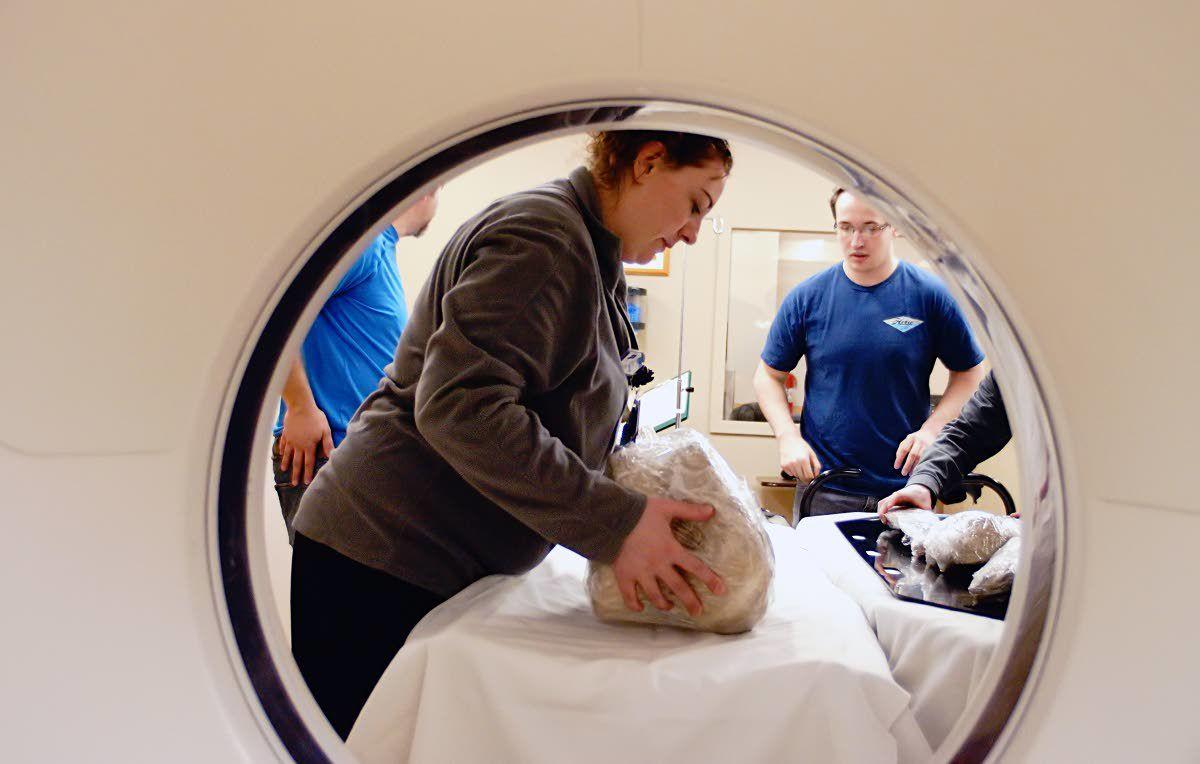 Amy Penney adjusts a wooly mammoth femur bone on the bed of a CT scanner March 23 at Gritman Medical Center. 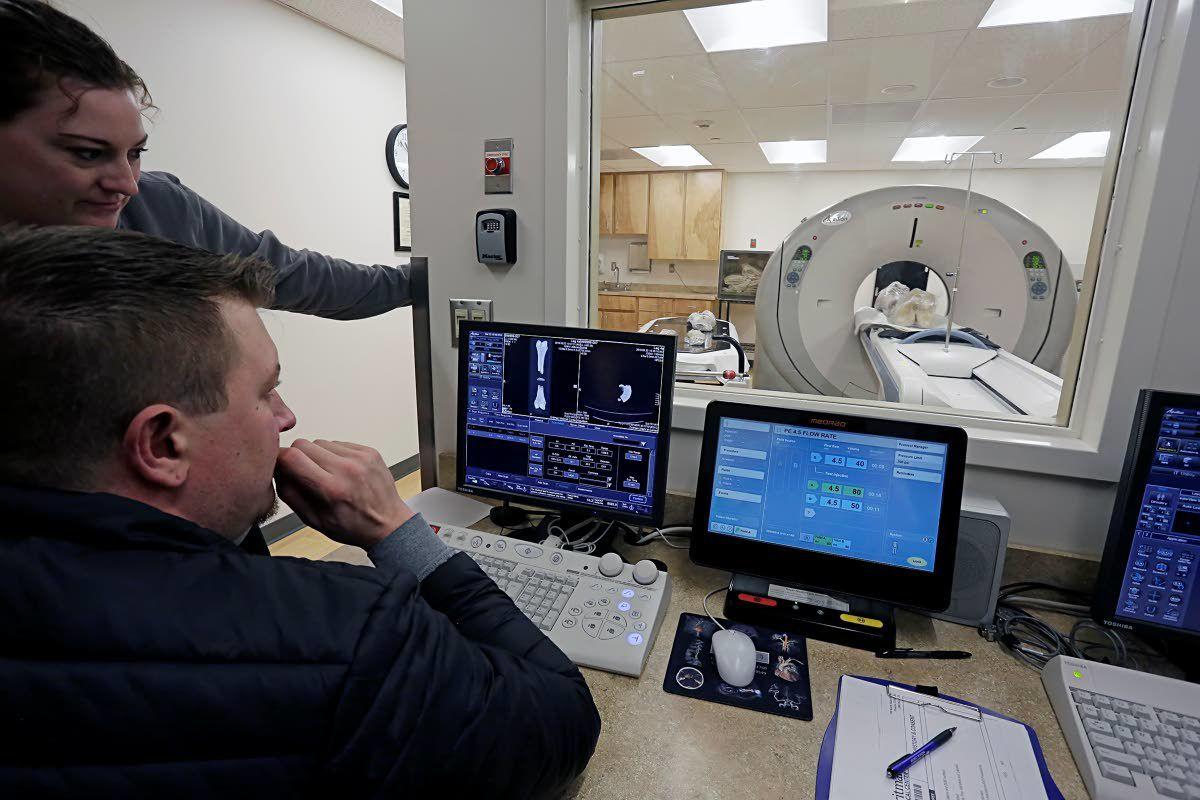 Amy Penney and Ben Anderson watch a monitor while running a mammoth femur through a CT scanner March 23 at Gritman Medical Center.

Amy Penney adjusts a wooly mammoth femur bone on the bed of a CT scanner March 23 at Gritman Medical Center.

Amy Penney and Ben Anderson watch a monitor while running a mammoth femur through a CT scanner March 23 at Gritman Medical Center.

After almost a year of studying a near-complete set of mammoth bones, one University of Idaho paleontologist has invited education majors to take part in the next phase of research.

Last year, Renee Love, an instructor and paleontologist with UI’s Department of Geological Sciences, led a “mammoth studies” class investigating the life and death of a mammoth that was unearthed in southeastern Idaho.

In the class, Love said, she directed a group of about 16 undergraduate students as they attempted to answer questions about the extinct mammal’s gender, age and cause of death — among other things. Part of that research included a trip to Moscow’s Gritman Medical Center, where students watched as hospital staff used a CT scanner to scan images of each bone.

This year, she said she’d like to bring in education students to help develop instructional curriculum surrounding the old bones.

“We’re kind of on phase two of the study,” Love said. “What I’d really like to see now is use what we learned from last semester and continue some of the work from last semester — but include education majors so we can make interactive exercises for elementary-age classrooms.”

Nicknamed “Cola,” Love said the mammoth was found near Soda Springs, Idaho, in the 1960s. Even though it has been almost 50 years since its discovery, she said Cola had undergone little study before it was loaned to the Palouse Discovery Science Center about 15 to 20 years ago. She said when the skeleton was returned to UI last year, she immediately launched a directed study of the bones, allowing undergraduates to cut their teeth on real research in a supervised environment.

She said since “Mammoth Studies” began, they have been able to determine Cola was, at most, 12 years old when it died around 11,700 years ago. As a juvenile mammoth, she said, Cola would have stood about 7 feet tall, or about half the height of an adult mammoth. She said other questions, including Cola’s gender, still linger, but she hopes to find some answers in this year’s “Mammoth Studies 2.0.”

“We just recently got a few more boxes of bones from the science center that they’d forgotten to give us initially and there’s actually tool marks on some of the ribs,” Love said. “We’d like to ask the question even more of early humans — what sort of interaction did they have with this particular mammoth, and what would that tell us about what early humans did in North America?”

While it is an exciting sight to behold, Love said mammoth bones aren’t necessarily rare. Having gone extinct between 11,000 and 13,000 years ago — a far cry from the 66 million years since dinosaurs roamed the earth — it makes sense that their remains would be more numerous. Additionally, she said, Idaho was an attractive environment for mammoth species and was a part of a migratory range that extended as far south as the U.S.-Mexico border.

While the bones themselves are not an unusual find, Love said, it is much less common to find a full mammoth skeleton. With 80 percent of its bones present, Cola is one of the most complete set of mammoth remains ever found in the state. She said the near-full skeleton is an impressive sight to behold and could be a potent resource in instructing the next generation of scientists.

“There’s a really neat story here and just being able to relate to such a large animal and to tell the story — I think that’s a really good opportunity for exciting young kids in the sciences,” Love said. “(We can) show them science can be cool — you can discover really amazing things about how our world was not too long ago based on the fossil evidence.”