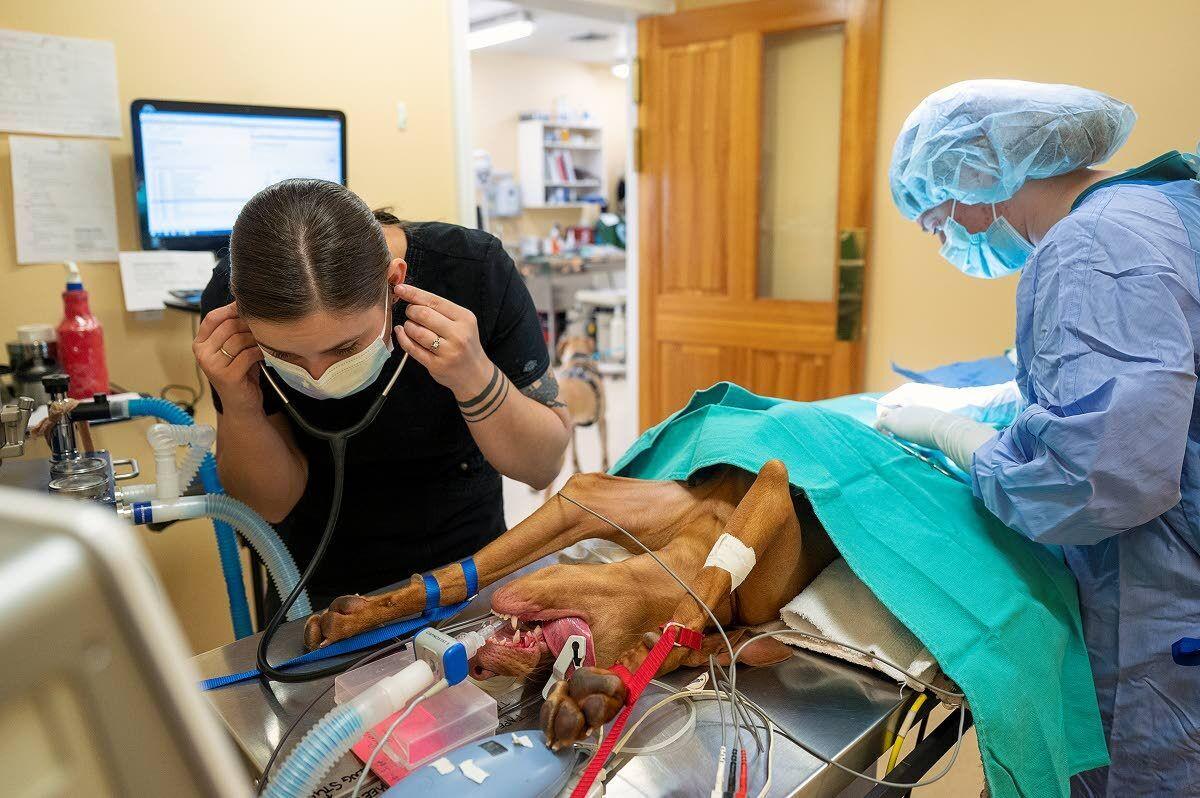 Brittney Spencer, an assistant, checks the heartbeat of a young dog getting spayed as Dr. Brooke Ogorodnikova performs the surgery Thursday at Rustebakke Veterinary Service in Clarkston. 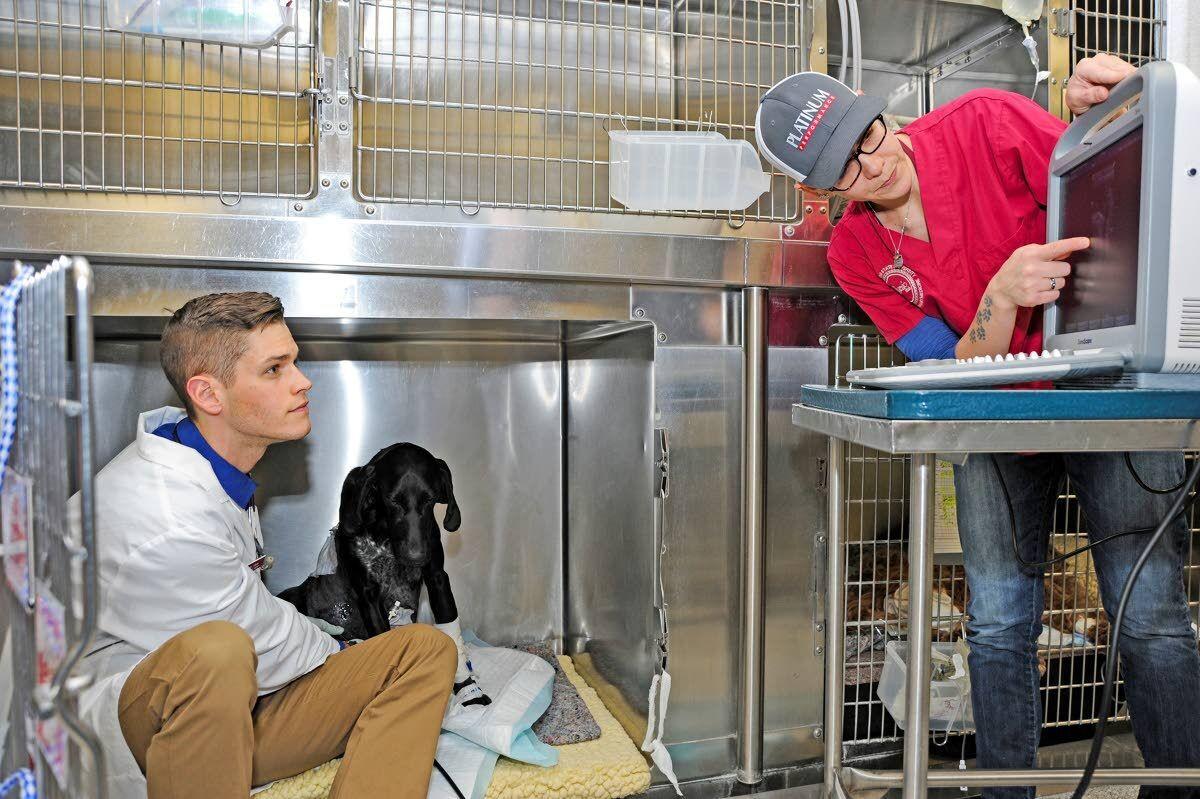 A Washington State University veterinary student and veterinary technician perform a postoperative ultrasound to ensure fluid is not collecting in the chest of a dog in this undated photo provided by the university. Several veterinary practices in the Lewiston-Clarkston Valley are referring pet owners to WSU’s teaching hospital for emergency after-hours care because of a shortage of vets in the valley. 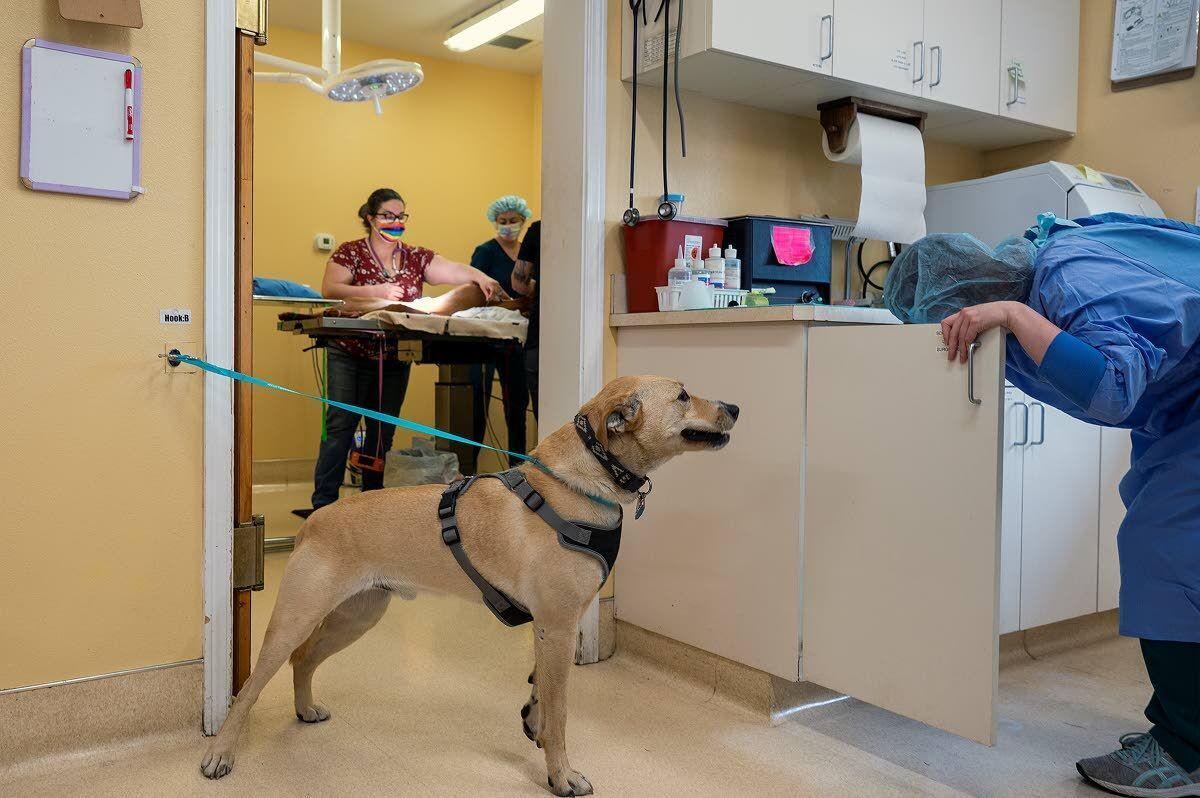 Dude, a dog waiting to be cared for, looks over as a veterinarian peers into a cabinet while Dr. Kaytlyn Schultz and Dr. Brooke Ogorodnikova perform surgery on a young dog Thursday at Rustebakke Veterinary Service in Clarkston. 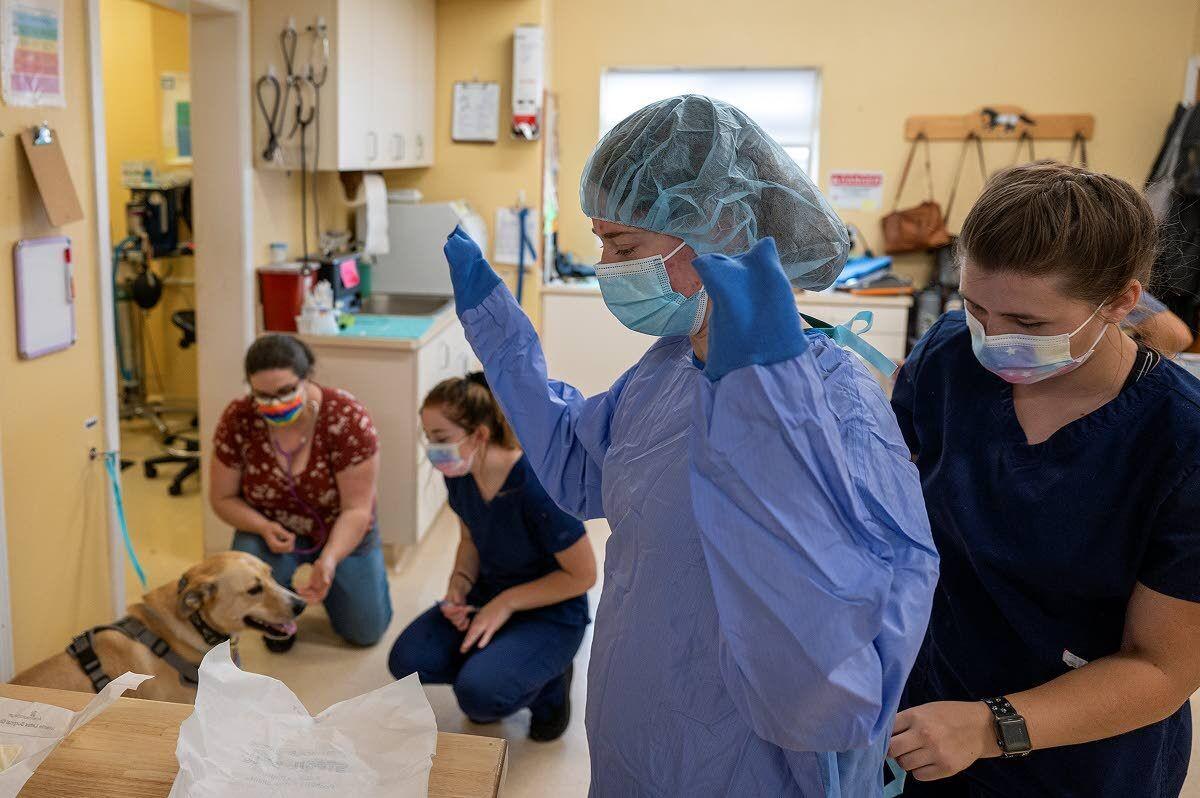 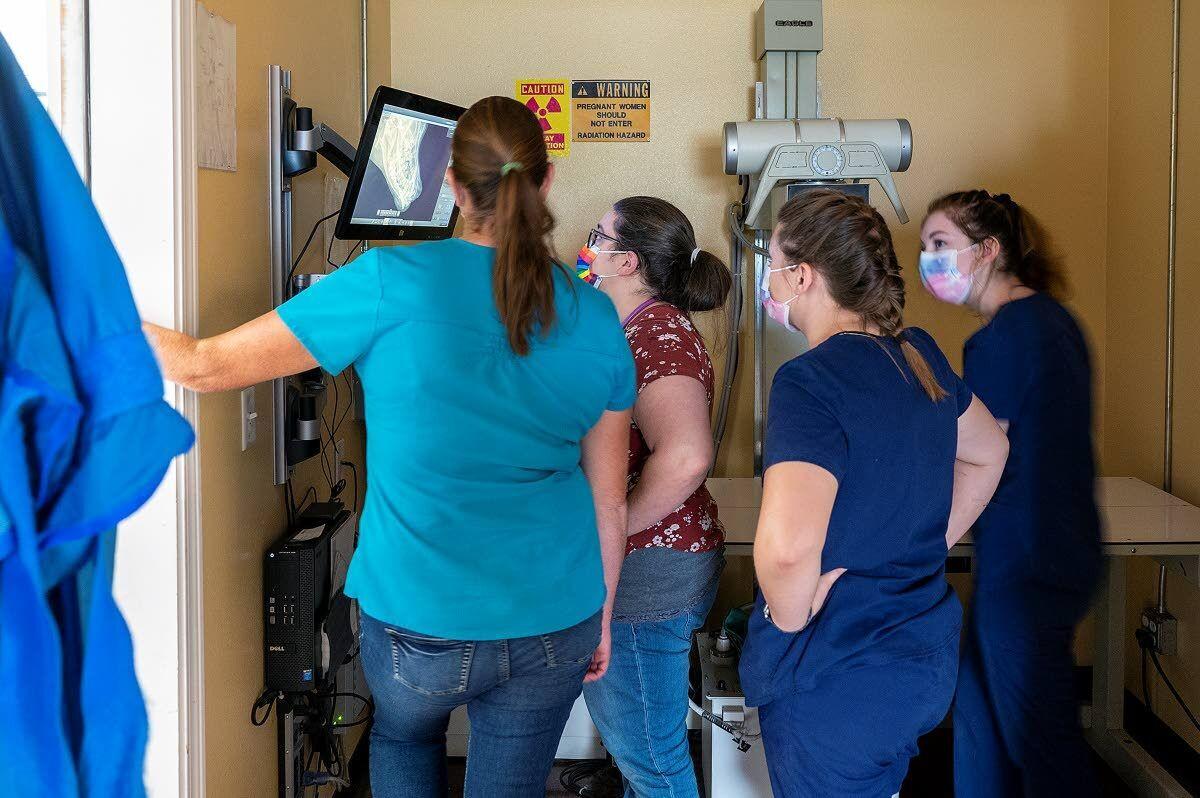 Staff at Rustebakke Veterinary Service look at X-rays of a dog’s teeth. 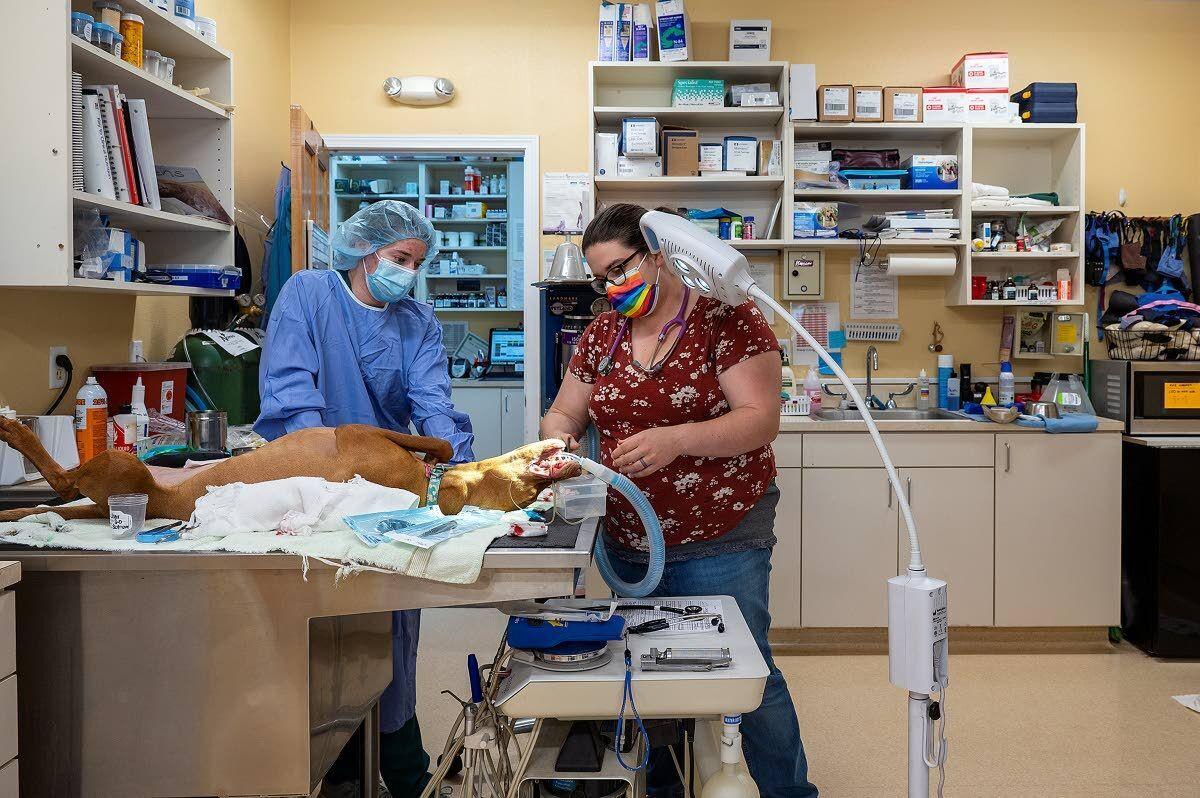 Brittney Spencer, an assistant, checks the heartbeat of a young dog getting spayed as Dr. Brooke Ogorodnikova performs the surgery Thursday at Rustebakke Veterinary Service in Clarkston.

A Washington State University veterinary student and veterinary technician perform a postoperative ultrasound to ensure fluid is not collecting in the chest of a dog in this undated photo provided by the university. Several veterinary practices in the Lewiston-Clarkston Valley are referring pet owners to WSU’s teaching hospital for emergency after-hours care because of a shortage of vets in the valley.

Dude, a dog waiting to be cared for, looks over as a veterinarian peers into a cabinet while Dr. Kaytlyn Schultz and Dr. Brooke Ogorodnikova perform surgery on a young dog Thursday at Rustebakke Veterinary Service in Clarkston.

Staff at Rustebakke Veterinary Service look at X-rays of a dog’s teeth.

Pet owners were warned last Sunday at Washington State University’s Veterinary Teaching Hospital in Pullman that it could take as many as six hours to be seen unless their animal was suffering a life-threatening crisis.

The facility’s medical staff was dealing with several unstable respiratory cases that came in back to back, said Charlie Powell, a spokesman for WSU’s College of Veterinary Medicine that runs the hospital.

The less-than-ideal situation played out better than the staff thought it might.

The most any pet owner had to wait on site to be seen was 2½ to three hours, and the animal in line the longest was a puppy with a minor wound. Some animals were left at the hospital and staff worked them in when time was available.

Escalating demand for services at the hospital is playing an increasingly important role in the availability of medical treatment for dogs, cats and other small animals in the Lewiston-Clarkston Valley.

Veterinarians in the valley are sending more cases to the WSU hospital after a cooperative of four clinics here ceased being available 24 hours a day for after-hours emergencies because the participants were overtaxed.

That decision is putting more pressure on WSU’s facility at a time when it was already getting busier.

Orchards Pet Hospital in Lewiston sees established patients for emergencies at all hours as much as possible, practice manager Wendy Vilgos said. Rustebakke Veterinary Service in Clarkston responds to large-animal calls after hours.

The change made by the cooperative was based on several factors, according to veterinarians interviewed for this story.

The number of veterinarians participating in the arrangement dropped from 14 in 2019 to seven, starting next month, they said. That leaves the remaining veterinarians on call more weeknights and Saturdays after staffing their own clinics, stretching themselves to see as many animals as possible, said Dr. Kariann Ruff, owner of Southway Animal Clinic in Lewiston.

“We’re leaps and bounds busier during the day than we ever were in 2019,” Ruff said.

Most days, she misses dinner with her three young children and is home to put them to bed before completing charts and other tasks between 9 p.m. and midnight if she isn’t on call.

Her clinic opens its telephones at 7:45 a.m. every day. Typically by 7:48 a.m., they fill the three appointments they purposely leave open in each day’s schedule for pets with needs that can’t wait.

“We are drowning, and we want to let the community know,” she said. “It’s really challenging.”

Reducing the hours Lewiston-Clarkston Valley veterinarians are available for emergencies is anticipated to help them provide quality service when they are on duty, Ruff said.

If veterinarians are in bed by midnight, they can still get enough sleep to be refreshed when it’s time to wake up the next morning to diagnose and treat animals booked for regular appointments, said Dr. Bill Meyers Jr., a veterinarian and owner of Riverview Animal Clinic in Clarkston.

It’s also expected to help prevent burnout among the veterinarians who remain, something that is critical because it can be hard to recruit new ones to the community.

For every veterinarian seeking work, there are usually more than 10 positions for them to choose from, Ruff said.

Given that it’s not uncommon for veterinarians who are recent graduates to be carrying $250,000 in student loan debt, they will usually pick an urban area with higher compensation over the Lewiston-Clarkston Valley, said Dr. David Rustebakke, owner of Rustebakke Veterinary Service.

The expectation to be on call after hours is another barrier to attracting veterinarians.

Rustebakke and another veterinarian in his practice take turns handling the after-hours call for large animals. But on the small animal side, he had to drop the on-call requirement to succeed in recruiting a highly skilled staff of two full-time veterinarians and one part-time veterinarian.

Ruff experienced something similar. Her clinic stopped accepting new clients because it is going from three to two veterinarians at the end of this month when Dr. David Ard, another veterinarian in the clinic, retires.

She came very close to finding a new veterinarian, but the applicant ultimately took a different position because she didn’t want to handle after-hours emergencies.

“We’re getting overwhelmed,” Meyers said. “(Veterinarian school) graduates want a life that is not all work.”

The situation in big cities is different because they have 24-hour-a-day emergency centers staffed by veterinarians who rotate through in eight-hour shifts as opposed to doing the work on top of duties at their own clinics, Rustebakke said.

Veterinarians in the Lewiston-Clarkston Valley evaluated that option, but determined the caseload here isn’t high enough to support such a venture, Meyers and Rustebakke said.

The issues in the valley are happening at a time when the WSU hospital is navigating its own labor shortages as its caseload climbs steadily, said the hospital’s director, Dr. Raelynn Farnsworth.

People from throughout Washington and other states bring their pets to the hospital if they need to see specialists, such as cardiologists, that aren’t available in other places, if animals need an intensive care unit or if emergency care isn’t available elsewhere, Farnsworth said.

The hospital has struggled to fill spots for veterinary technicians who do the types of tasks nurses would looking after human patients.

“We are trying to do the best we can to meet the needs of the area, but there are times we are going to have to triage things,” Farnsworth said.

Many people don’t understand that payment is typically expected upfront at veterinary clinics. While veterinarians want to help sick or hurt animals, Farnsworth said, they can’t afford to treat pets at no charge.

That’s different from what happens at human emergency rooms for a variety of reasons, including the fact that, unlike human hospitals, veterinary clinics don’t get reimbursed through government programs like Medicare, even though veterinary medicines and equipment are generally the same as those used for people and every bit as expensive.

That reality is even tougher than it has been in previous generations because the emotional ties people develop with their animals have gotten stronger, Meyers said.

“Pets are now in people’s beds as opposed to their backyards,” Ruff said. “They’re highly bonded with their animals.”

Especially considering the limitations in the present environment, Rustebakke, Meyers and Ruff said, one of the best approaches is for pet owners to make as many preparations as possible for emergencies before they happen.

Two of the most important steps are establishing care at a veterinarian’s office with routine wellness exams and setting money aside for when things go wrong, Ruff said. (See accompanying information.)

Many emergencies, Rustebakke said, involve animals that have never seen a veterinarian.

Be prepared for a pet emergency

No matter how well you care for your pet, almost all animals need emergency care at some point. Here are a few tips from area veterinarians about how to limit those instances and be ready for them: