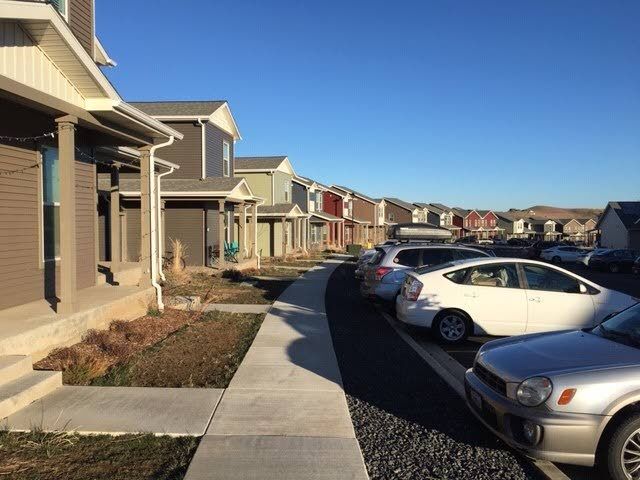 The Hills on Grand development in Pullman.

If you look up on your way out of Pullman, toward the town of Palouse, you’ll see a new colorful student housing development to the left. It goes by the name “Hills on Grand” and it sits high on a bluff, perched as if on a temple mound. To get to it you’ll need to make a U turn and drive up.

It takes its planning cues from a movement called “New Urbanism,” dating back to the 1980s, when suburban sprawl was out of control and no plan was in place to reverse course. Those behind the movement called for a return to the horse and buggy era, less because they liked it and more because they found in it the one solution that could at once correct the suburban problem and appeal to the American taste for historic architecture.

Americans may be modern in the way they use technology and do business, but they are less so when it comes to place and space, forever yearning for the physical history they either never quite had or had but which was quickly replaced with bland and cold commercial enterprises.

About the old too, the new urbanists liked the fact that it held a community together by virtue of the fact that there was no car yet. Whatever distance the individual had to traverse, he or she had to do on foot, nicely and naturally connecting with neighbors and random pedestrians alike. From that ethic evolved features such as the porch and the front yard, simple in one sense but socially and psychologically complex in another.

But there were problems with the new urbanist model as well. In its return to history, it had also returned to a colonial past that was problematic to say the least, not least because it was associated with slavery, subjugation of women, desecration of native land and more. For all the cute references to steep pitched roof motifs, colonnades, porches and the like, there was also embedded in the quotations the memory of awful racial and social practices.

Nowhere is this better visually expressed than in the movie “The Truman Show.” Filmed on the site of one of the more iconic “New Urbanist” productions called “Seaside,” it, at one point, makes the argument that between the colonial lie leveled on the modern white American and that on his African American brethren there is moral equivalent. Both are prisoners of a false colonial narrative of allegiance and community.

The “Hills on Grand” is, too, copy and paste and indeed physically and intellectually thin to recall any of that history. As one resident said of the houses, they are “tin cans” and of the construction “uneven and flimsy.”

But ignorance of history and reference does not excuse blind and mindless creations. To quote from the past is fine and sometimes necessary but the practice should also come with a careful critique of the meanings and values associated with it. A mere image lifted from one era and dropped unto another won’t do, not least because it can be culturally damaging and indeed economically wasteful.

Consider the porches for instance, a topic already touched on. Meant as social connectors with members of the community, here at the Hills they are barely wide enough to pull a chair and stretch a leg, making them, really, mere decoration slapped on the face of a building. To be sure, some porches are wider than others and potentially more useful; but on the whole, they are cold and cheap, made all the more so by the lumber yard posts holding up the roof.

The porches are especially weird when evaluated next to the clientele of the place. Had this been a mixed community-a mix of old and young, students and professional, families and single individuals-the porches would have made sense, building lasting relations over time. And indeed keeping the community active and protected by having “eyes on the street,” to quote the late urbanist Jane Jacobs on that note.

But to limit the residents to students is to cancel their need and impact. Students are here one day, gone the next, and rarely with the kind of time to sit on a porch and conduct lengthy conversations with neighbors. Naturally there are exceptions.

Other mixed messages lie in the strange dichotomy between community center, on the one hand, and “resort” pool setting right next door, on the other. The first suggests shared ground and economy, the other wealth and entitlement. For whom is this place anyway?

Not sure how a development like this finds the light of day, but future ones should be vetted on grounds beyond the market. The market is important but more so is the culture we live by and promote. Otherwise, that class that Samantha took in American history will have evaporated by the time she gets home.

Ayad Rahmani has been with Washington State University since 1997 and is an associate associate professor in the School of Design and Construction.