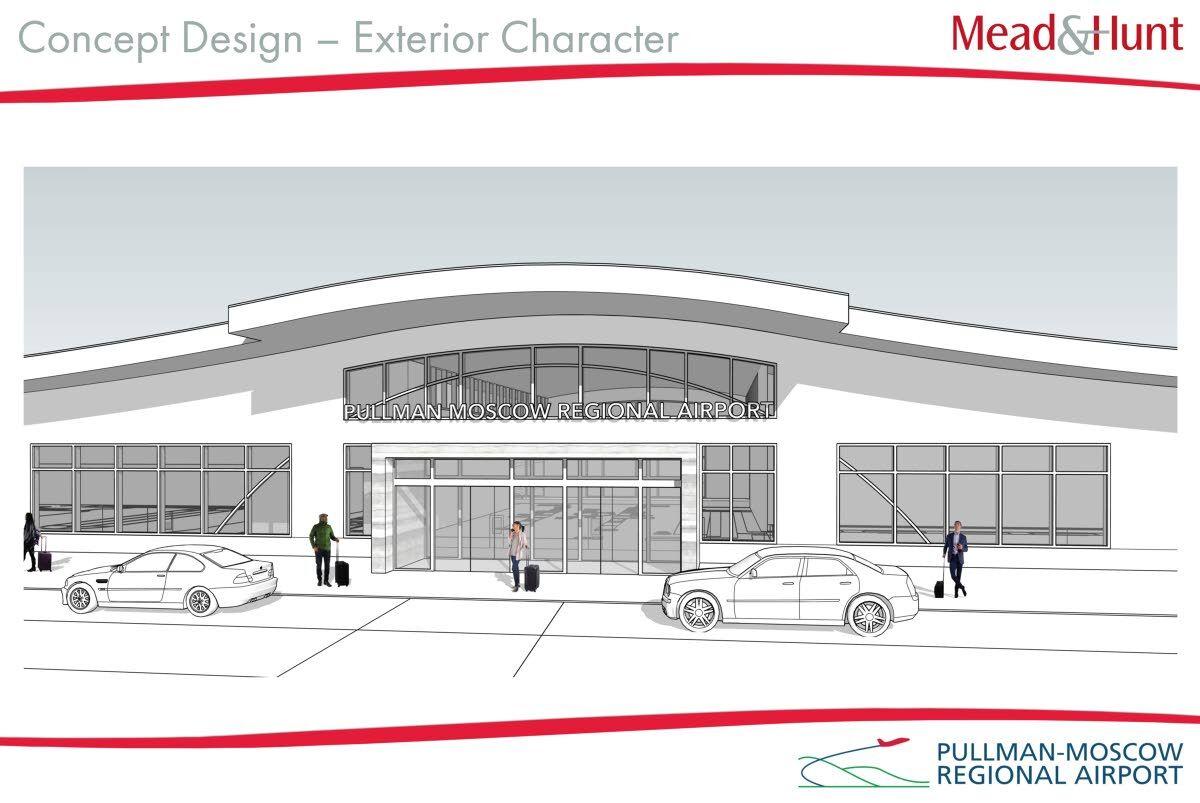 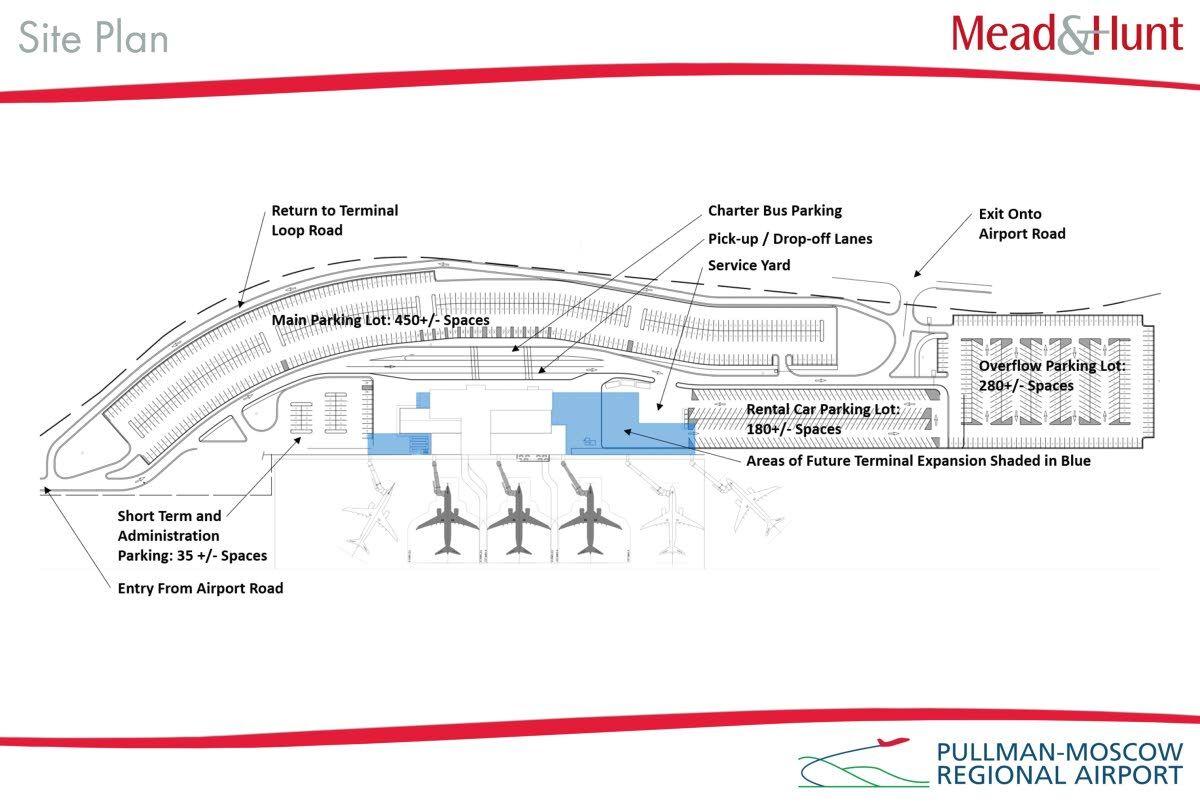 Last week, images of the future Moscow-Pullman airport were twice on display for public review and comments. They showed plans, perspectives, or what the firm behind them calls “exterior character,” and other information related to airport data. That was very nice and well appreciated. Less nice was the design itself, a mere functional diagram extruded into a building with little or no consideration for what happens between floor and ceiling, inside and outside.

The design is painfully blah, more responsive to parking numbers than the excitement but also fears associated with travel. One quick look at the site plan and you can see that, the arrival drowned in a sea of stalls, marching relentlessly across the site without a modicum of break in landscape, or some other feature sensitive to the fact that between home and plane the psyche is riddled with mixed emotions, anxiety and joy.

Why not use this transitional space to put the mind at ease, not least by featuring designs that speak to the virtues of the area, its history, innovations, artwork and more. In this day and age, this might mean the provision of biophilic environments, where plant life, animal life and humans can coexist seamlessly. Imagine arriving at the parking lot and instead of asphalt you are greeted with pavers, tessellated in such a way so as to allow grass to break up the hard surface along the way. Or if not grass then some other material to soften the ground and artfully celebrate the joy of walking and viewing the hills nearby.

Imagine, if instead of the relentless repetition of stalls marked by nothing but paint lines, the walk between car and door was laced with wooden benches, grassy islands, overhangs-all featuring native plant species, sustainable harvesting methods, bird habitats, shade. The parking lot would turn into a stage on which lessons in conservation, environmental stewardship, social justice-are on display. Lessons that are already underway in more than one class and more than one discipline at the two universities left and right.

Each moment along the way could become an interdisciplinary opportunity between classes, fostering collaborations otherwise either too dormant or too farfetched to become reality. Where explorations between, say, horticulture, architecture and engineering may remain little more than a nice thought back on campus, now they can mature into a visible contribution to society. Or Native American history, African American culture, science, art and so on.

The airport as shown in the pictures is seriously out of touch, accommodating security issues and offices just fine, but otherwise tone deaf to where we are in time. Responses to climate change are mentioned but nowhere integrated into the design, and certainly never surface as contributions to aesthetic expression. We see a curved roof but nothing on it to suggest a particular effort to harvest solar, rain and wind energy.

Dining experiences are reduced to concession stands with few tables pushed to the corner in shame. Waiting is similarly shoved to the side, as if the whole experience of travel was little more than a sordid and meaningless function of pushing people through, like tomato paste in a tube.

Windows are mere cutout in the walls, lifeless zones, squandering the opportunity to articulate a special conception for sitting, working and looking out, and through it a unique look for the building. Nothing seems to have been learned from our pandemic restrictions, some of it leading to creative and artful spatial solutions.

Mead and Hunt, the firm behind the images, is a company known for its excellence in work on engineering projects. It dates back to 1900, when “Daniel W. Mead, an internationally recognized expert in hydroelectric and hydraulic engineering, established this consulting firm.”

They have won many awards for their achievements in engineering across the country, most recently in South Carolina, honoring their commitment to “innovation, public perception, economic and sustainable considerations, among other” attributes.

Indeed, they are model engineers, but architects they are not. Or not primarily. What architecture they bring to the table is fine but largely a pretext to paving the way for engineering work. There is nothing wrong with it per se, but inspiration and aspiration is not its aim. It lacks cultural, philosophic and poetic conception, which in most schools, certainly Idaho and WSU, wouldn’t pass muster beyond the first year level.

Airports are august works of engineering, demanding not only robust structural and environmental analysis, but responses to stringent FAA and now TSA requirements, among others. But they are also sites of tremendous cultural value. This is where great memories are shaped, knowledge advanced, relations fomented. The list of emotive and intangible associations can go on and on.

It should behoove us to meld sophisticated engineering with thoughtful architecture. Ideally, the two come already synonymous, fusing in one fell swoop the mind that calculated the beam with the hand that drew it.

But that rarely happens, triggering creative collaborations between the two, two or more individuals or groups of professionals, often leading to life-long healthy and meaningful working relations.

Either way, we must urge the powers to be to design and build an airport befitting the history, geography, innovation, and generally great work daily underway in the area. This is a unique opportunity, let’s not squander it.

Rahmani has been with Washington State University since 1997 and is an associate professor in the School of Design and Construction.