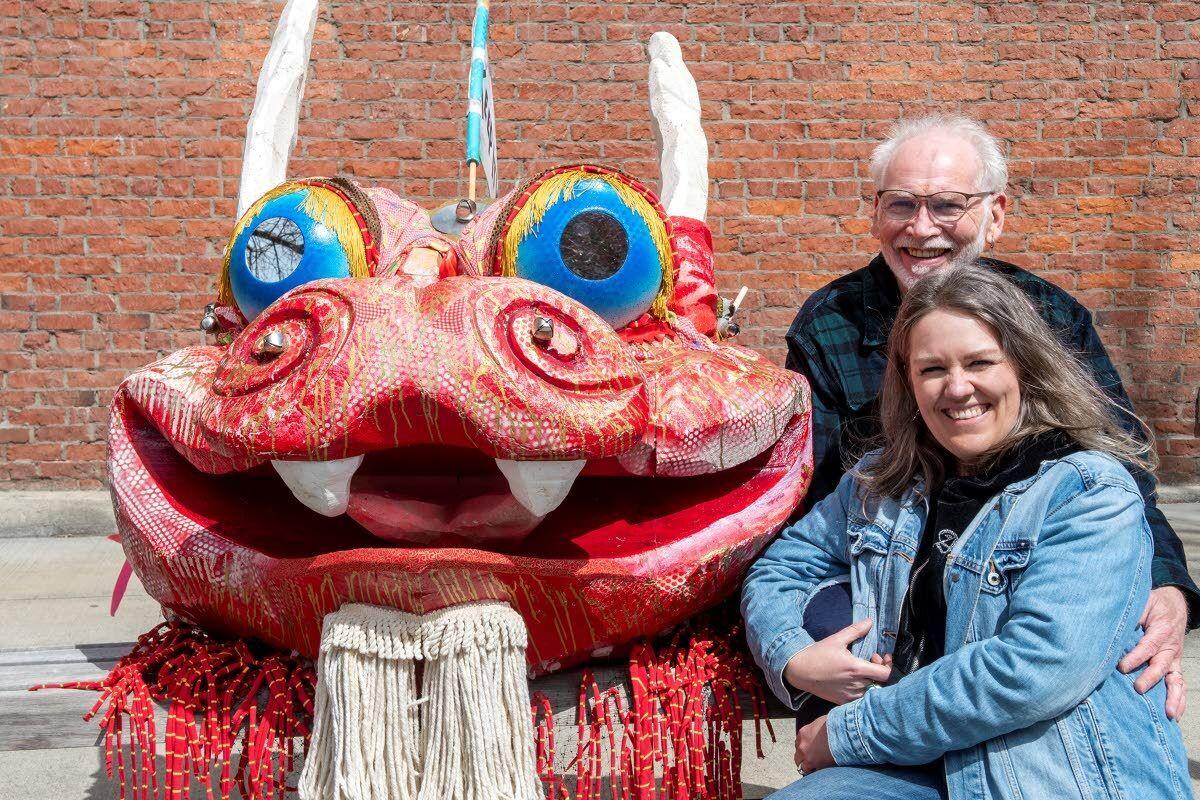 Marc Lawrence and his wife, Jill Lawrence, pose next to the Wild Thang dragon in Friendship Square in Moscow. 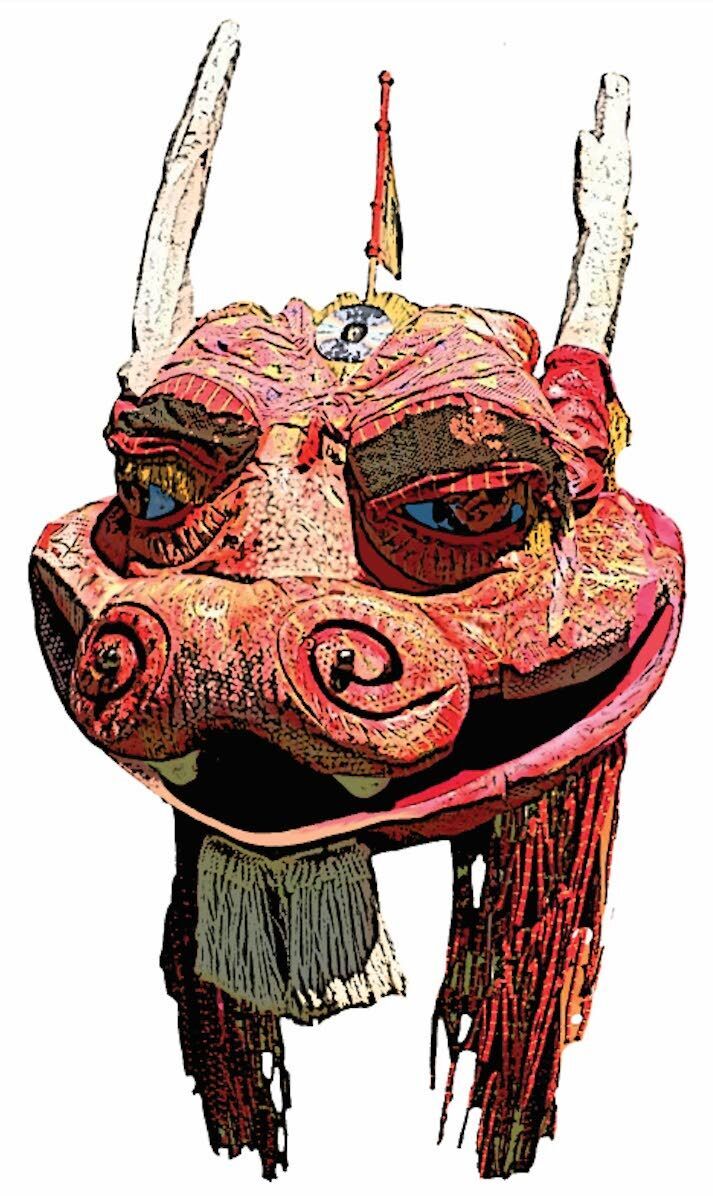 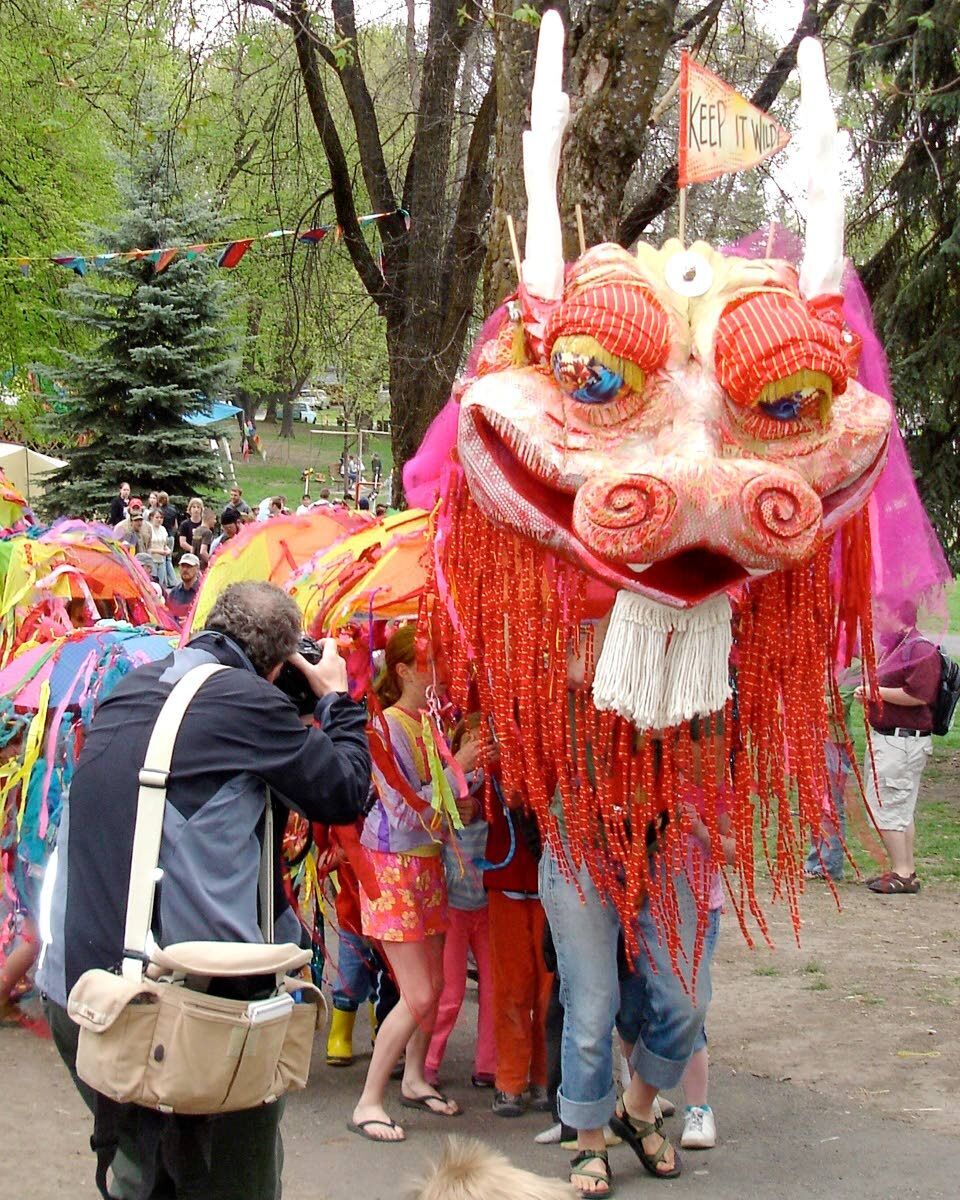 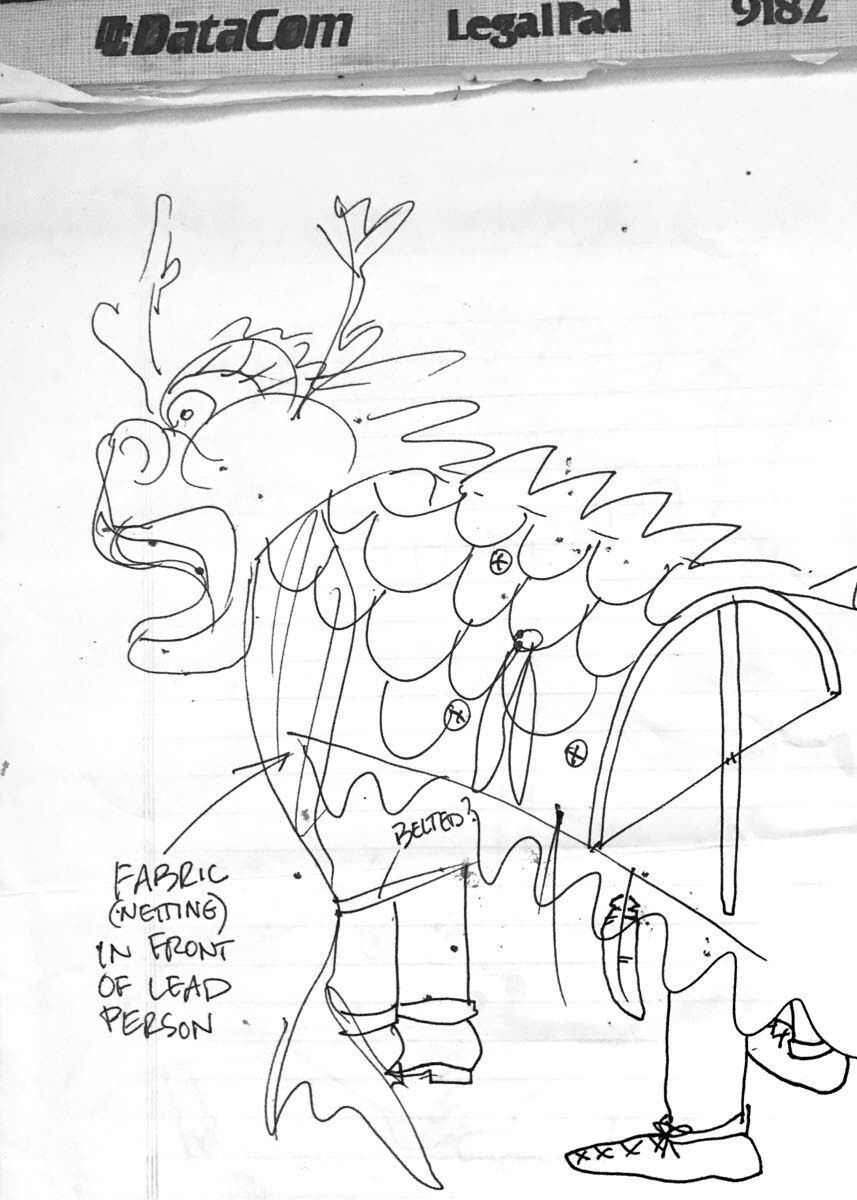 An original sketch by Lawrence.

Marc Lawrence and his wife, Jill Lawrence, pose next to the Wild Thang dragon in Friendship Square in Moscow.

An original sketch by Lawrence.

The dragon born on Earth Day in 2000 in Moscow’s Friendship Square didn’t hatch from an egg. It was born with a purpose: to draw people’s attention to the need to keep nature wild and free.

That may have been forgotten by some, or never known by others as, over the years, people took thousands of photos of the dragon during its annual appearance at the Moscow Renaissance Fair.

The dragon named Wild Thang is set to return to Main Street on Saturday for an alternate version of Moscow’s annual Renaissance Fair.

When fully assembled, the dragon is 10 feet long. It smiles over a beard made of mop yarn. Its head is made of carved and painted foam; its body is composed of “miles” of colorful streamers.

“It would reach from here to Seattle if you arranged them from end to end,” said Lawrence, 64.

Lawrence set up the dragon’s head in Friendship Square last week for a photo. Its mirrored, bowling ball-sized, blue eyes captured his reflection as he and his wife, Jill, attached its removable antlers. Its eyes were replaced four times over the last 21 years. This set is brand new, Lawrence said. The dragon’s body was rolled up in a box in his Subaru.

“We were all here wondering if it would work or be a terrible embarrassment,” Lawrence said, about the day Wild Thang made its public debut at this spot.

He spent his 30-year career handcrafting things from foam board as a self-employed industrial designer. His clients included Apple, Staples and Hewlett-Packard, and he created everything from computers to bike helmets. Now retired, he’s always enjoyed using his foam crafting skills for creative purposes. At the moment, he is creating a life-sized statue of the tallest recorded man in history, Robert Pershing Wadlow. Wadlow, who stood 8-foot-11, was born and raised in Alton, Ill., Lawrence’s hometown. When the statue is done, Lawrence plans to erect it outside his Potlatch home as a tourist attraction.

Lawrence headed West in an old truck after graduating from college in the 1970s. He stopped to visit a friend in Pullman but was too broke to go any further, so he rented a farmhouse in Garfield and fell in love with the region. He left for a time to work in the San Francisco Bay Area, but in the 1990s he took advantage of FedEx and the growth of the internet to move to Idaho and work remotely. Today, machines have taken over his profession, he said. “I was on an extinction path that I jumped off of through retirement.”

Not long after he’d returned in the early ’90s, Lawrence was shopping at the Moscow Food Co-op and met someone from the nonprofit environmental group Friends of the Clearwater. He started going to meetings. The group was working to build public support for the passage of the Roadless Area Conservation Policy, a plan to federally protect 58 million acres of the wildest remaining national forest lands. Brainstorming ways to attract attention to the cause, he sketched out a plan for a giant dragon that would be the group’s entry in the 2000 Earth Day parade. He toyed with the idea of making giant native animals, he said, but there were only eight people available to help that day.

“I was just trying to think of a big, impactful way to attract people to the cause of what Friends of the Clearwater was trying to do,” he said.

The triangle flag mounted on the back of the dragon’s head speaks of its original mission with the words: “Keep it Wild.”

The dragon earned its name from a newspaper story about it with the word “thing” misspelled as “thang.” They thought it was funny and kept it, he said.

He thinks Wild Thang made its first appearance at the Renaissance Fair around 2003. Since then, it’s always been assumed it was going to be there, he said. Each year, it leads the parade and is set up in the park where people can see and photograph it.

“To see the kids running through it just gives me a bump and holds me until the next year,” said Lawrence, who always takes a moment to sit in the grass nearby and watch them play. “I don’t know how I got so lucky to create something so special.”

Keeping wild lands wild and free is a never-ending fight, he said, and he suspects the dragon will emerge in support during future hearings over dam removal.

“When a Republican believes dam removal is the only way to save salmon and taxpayer dollars, maybe there is hope,” he said, referring to U.S. Congressman Mike Simpson’s proposed plan to breach the lower Snake River dams to recover critically endangered salmon populations while reshaping the Northwest energy network.

Whenever the dragon appears, Lawrence hopes people will think about why it came to be.

“He’s happy to be a part of the playground, but that’s not why he’s here. The very kids running through the dragon are the ones we want to save those lands for.”