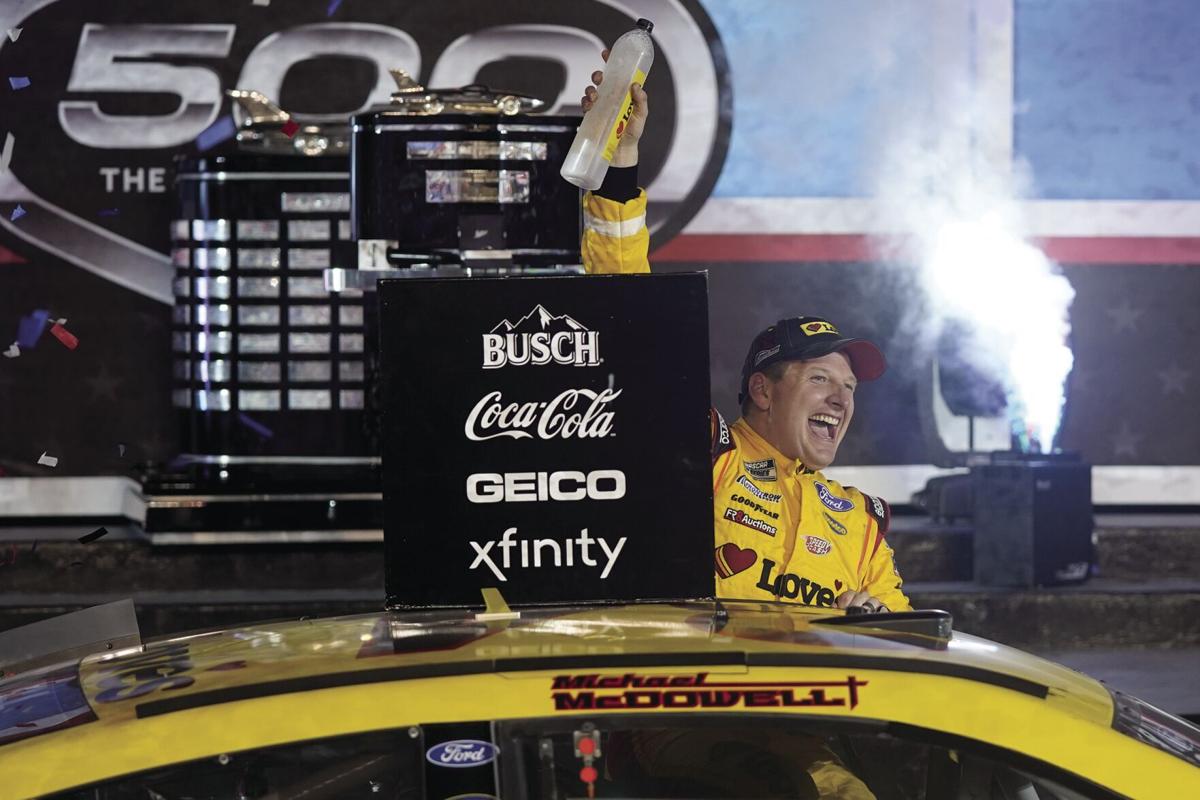 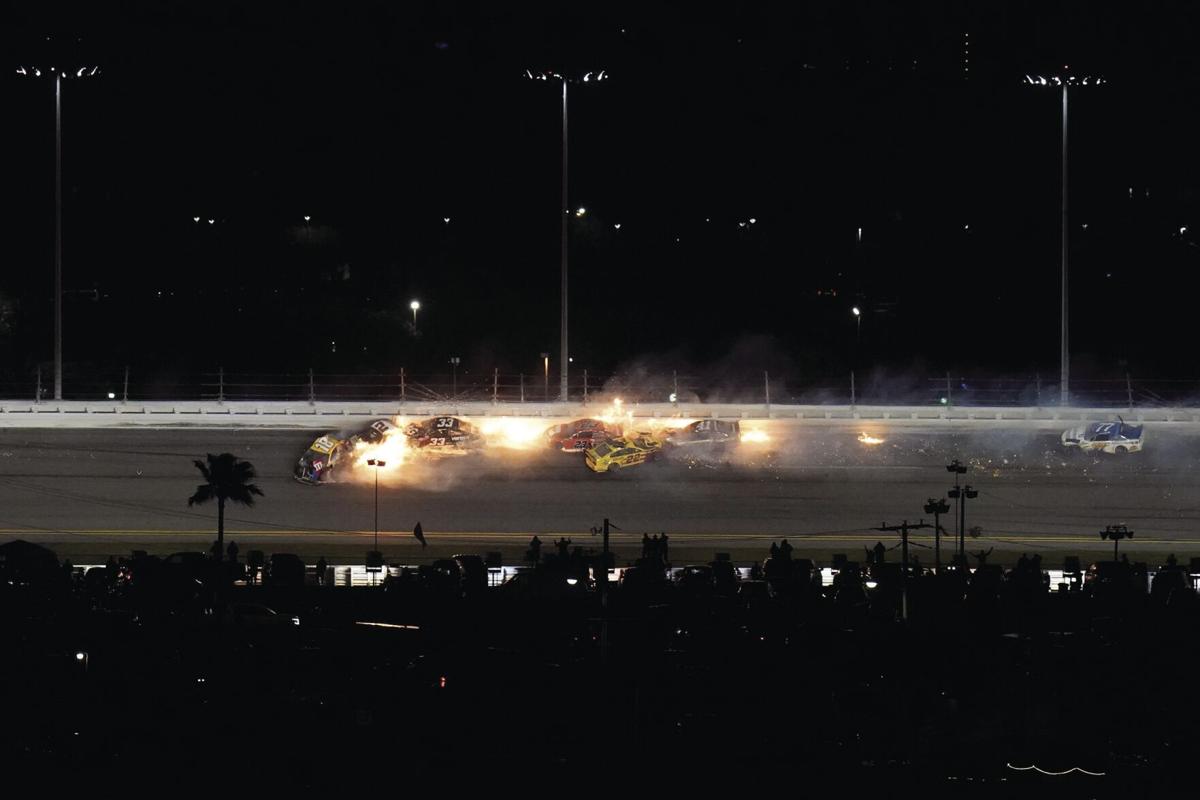 Racers crash during the last lap in the Daytona 500. Among the driver involved were Kyle Busch (18); Brad Keselowski (2), who was in second before the crash; Joey Logano (22), who was leading; and Bubba Wallace (23).

Racers crash during the last lap in the Daytona 500. Among the driver involved were Kyle Busch (18); Brad Keselowski (2), who was in second before the crash; Joey Logano (22), who was leading; and Bubba Wallace (23).

DAYTONA BEACH, Fla. — Michael McDowell was glued to Brad Keselowski's bumper, watching and waiting for his chance to win the Daytona 500.

Joey Logano was the leader, the laps were winding down and no one had the nerve to pull out of traffic. McDowell was certain Keselowski would go for it eventually, and when he did, McDowell would play his hand.

On the final lap, Keselowski attempted to dart around Logano, but Logano threw a block on his teammate that crashed them both. McDowell stayed right where he was, foot on the gas, and drove through a crash scene for a stunning upset.

“I knew he would go for a race-winning move and my plan was to let him make that move,” McDowell said. "I knew I didn’t want to make my move too early, so I was committed to the (Keselowski) bumper and when he made the move, the hole opened up."

A 100-1 underdog when the race began Sunday, McDowell won for the first time in 358 Cup starts when the checkered flag finally flew about 15 minutes after midnight Eastern. The race was stopped by rain for almost six hours and ended nine hours after the green flag waved at Daytona International Speedway.

“There’s been lots of years where I was wondering what the heck am I doing and why am I doing it?" McDowell said. “I always knew if I just kept grinding that one day everything will line up and go right.”

NASCAR's season opener was stacked with storylines. Denny Hamlin was trying for a record third consecutive Daytona 500 victory, and the team he started with Michael Jordan was debuting with driver Bubba Wallace.

Kyle Larson was back after almost a year in exile for using a racial slur, and reigning Cup champion Chase Elliott was going for his first Daytona 500 win.

All the way at the back of the field, 1990 Daytona 500 winner Derrike Cope made what he said would be his final NASCAR start. At 62 he was the oldest driver in the field, and his upset victory 31 years ago was considered the biggest in race history.

McDowell didn't take that title from Cope, partly because McDowell is a strong superspeedway racer capable of mixing it up with the usual suspects. If he could ever find himself in the right place at the right time, McDowell figured he could steal a win.

“It's been a tough road for me. I've had to spend a lot of years grinding it out,” McDowell said. His career has been stabilized by four seasons driving for Front Row Motorsports, a tiny team in the Ford family that can hold its own at Daytona.

McDowell was in the mix before the two Penske cars derailed the finish. His Ford was strong enough to push Keselowski, and McDowell figured with the checkered flag in sight, he'd try to pass Keselowski as they exited the final turn.

Logano's block of Keselowski — it seemed late, Keselowski already had started to pull alongside his teammate — triggered a fiery multi-car pileup that was in McDowell's rearview mirror.

“Brad was turning right, Joey was turning left and I went right through the middle,” McDowell said. “It's just kind of a blur from there.”

“I wanted to make the pass to win the Daytona 500 and it ended up really bad,” Keselowski said. “I don’t feel like I made a mistake, but I can’t drive everybody else’s car. So frustrating.”

Logano had no explanation for the ending.

”Pandemonium, I guess. Chaos struck," said Logano, who then praised McDowell. “It’s a real bummer that none of the Penske cars won, but at least a Ford won and I’m really happy for McDowell.

“If we couldn’t win, I’m really happy to see McDowell win this thing.”

McDowell, who led less than half of a lap, drag-raced Elliott and Austin Dillon until NASCAR finally called a caution.

A batch of solid contenders were knocked from the race just 15 laps in by a 16-car accident that began at the front of the field. It thinned the pack and set up a showdown between Kevin Harvick and Hamlin.

Hamlin and Harvick had the two best cars but pit strategy ended Hamlin's shot at winning a record third consecutive Daytona 500. The Ford drivers pitted first as a group, followed by the Chevrolets a lap later and finally the Toyotas.

But the Toyota group has just five cars and they couldn't group back together to reclaim control of the race. It put Logano, Keselowski and the Ford drivers out front, and Logano led the final 25 laps until Keselowski made his move.

McDowell held off Elliott and Dillon. Harvick finished fourth, and Hamlin was fifth after leading a race-high 98 laps.

Only 11 cars finished on the lead lap.