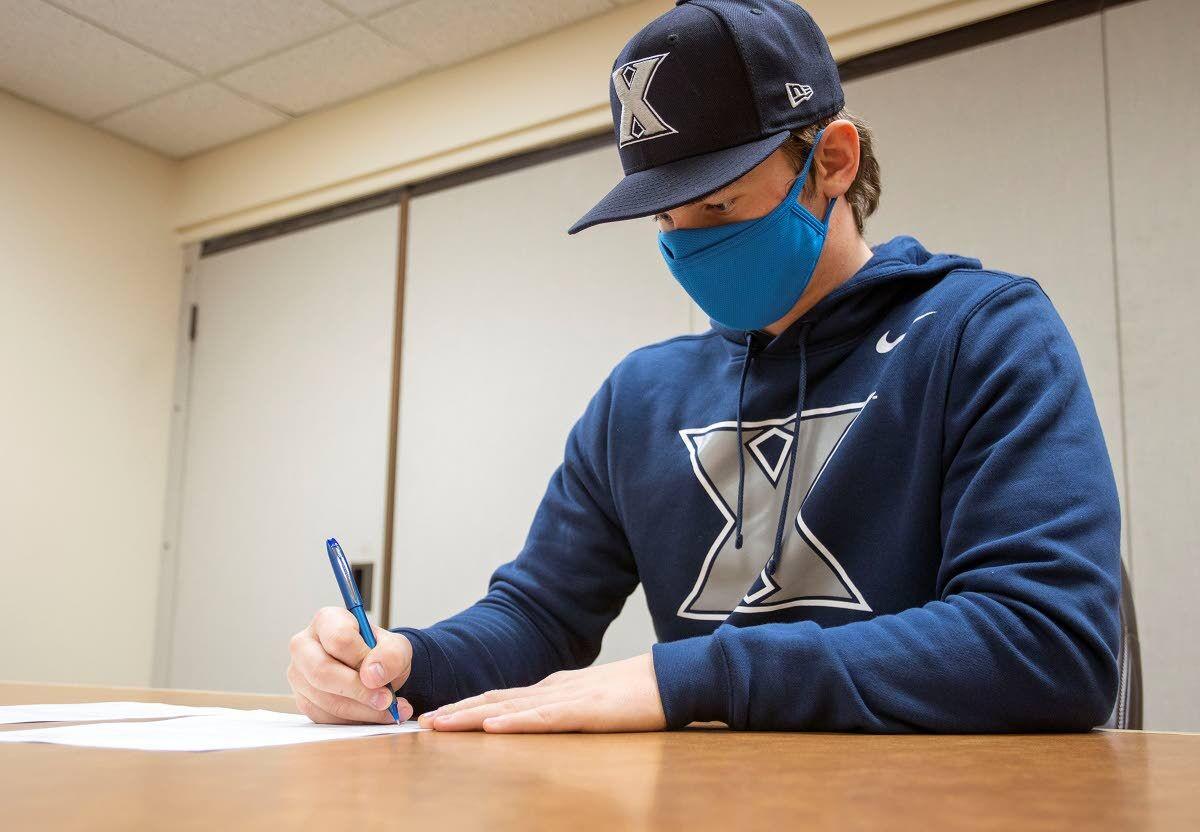 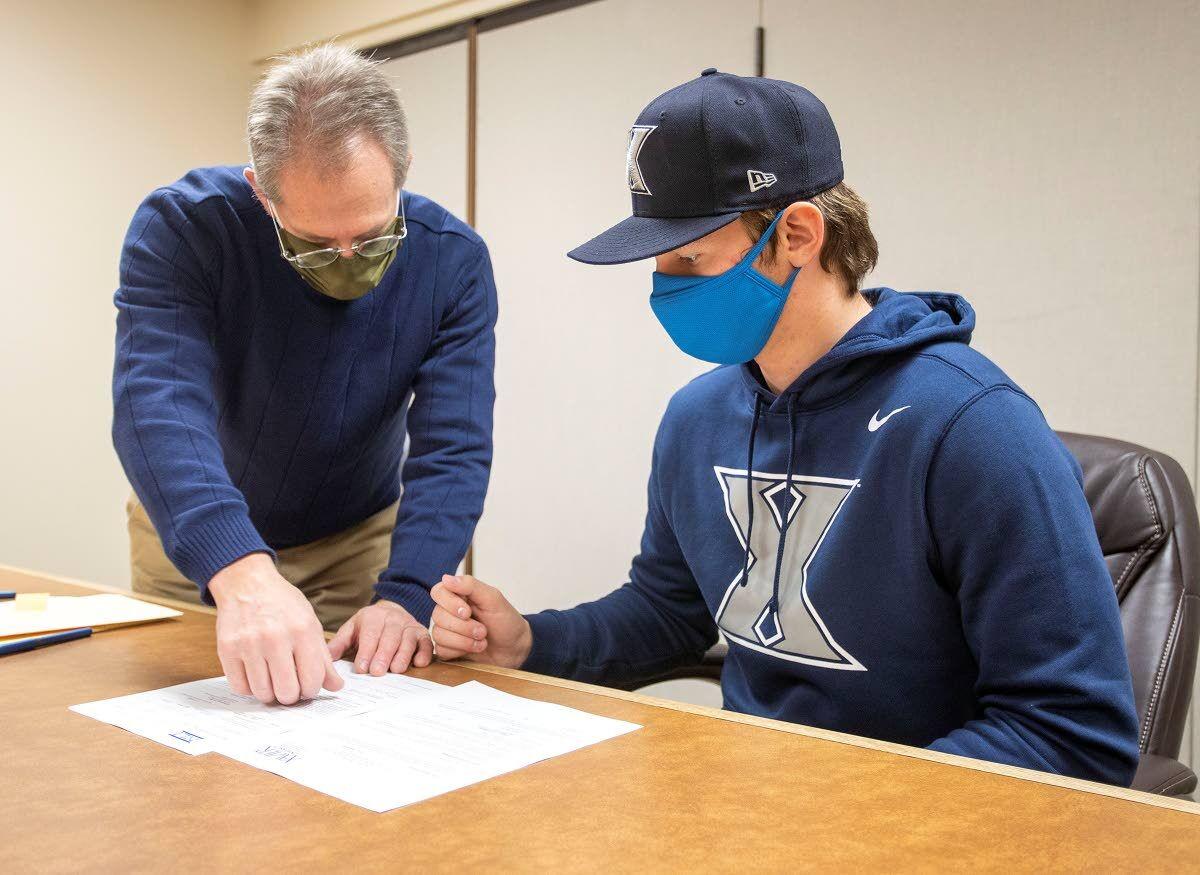 Pullman High School senior Hyatt Utzman reviews the documents with his father, Howard Utzman, before signing a national letter of intent to play baseball at Xavier University on Wednesday in Pullman. 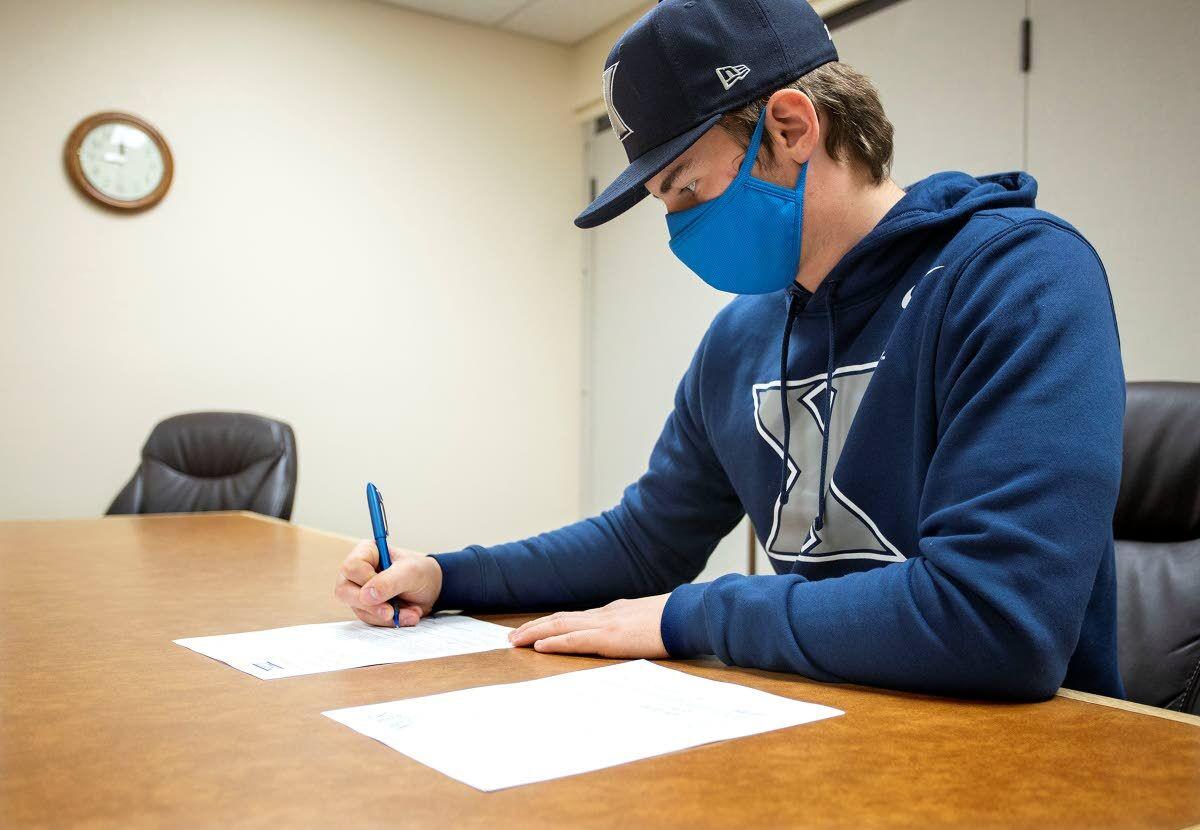 Pullman High School senior Hyatt Utzman reviews the documents with his father, Howard Utzman, before signing a national letter of intent to play baseball at Xavier University on Wednesday in Pullman.

Hyatt Utzman always has had one of the strongest arms on the baseball diamond.

That was apparent in 2015 when a then-12-year-old Utzman took part in a Golden Arm competition at a 12U tournament in Cooperstown, N.Y. — home of the National Baseball Hall of Fame.

He somehow launched a baseball 150 feet through an approximately 6-inch hole. His reward? A glossy, 3-foot-tall trophy that could put the Commissioner’s Trophy to shame.

Five years later, the Pullman High School senior pitcher and infielder used his “golden arm” to sign his national letter of intent to play for the Xavier Musketeers, an NCAA Division I school in Cincinnati, Ohio.

“I’ve been verbally committed there for close to a year now, so I’ve kind of known for a bit of time that I’m going there,” Utzman said, “but it’s kind of a relief knowing it’s a done deal.”

Utzman first caught the eye of Xavier coach Billy O’Conner playing a travel tournament in Seattle, where the coach was watching another recruit. Three months later, O’Conner saw Utzman again at an Arizona tournament and offered the then-15-year-old a scholarship.

Utzman — who also had DI offers from Santa Clara, Columbia, Boise State and Air Force — verbally committed to Xavier in November 2019. He’s glad he pulled the trigger when he did.

“(Xavier) still seemed like the best fit for me, so I verballed, and then a few months down the line we hear about the coronavirus,” Utzman said. “Looking back at it, that was the best decision because pretty much for a lot of players this summer, baseball coaches weren’t able to go watch a lot of the other recruits.

“If I didn’t make that decision, then I don’t know how this summer would’ve shaped out.”

Utzman said he and his teammates were heartbroken when their spring high school season was axed because of the pandemic. After earning first-team all-league honors in the infield as a freshman and on the mound as a sophomore, Utzman’s goal was Great Northern League MVP his junior season.

He and the Greyhounds also had high hopes of winning the conference title.

Instead, Utzman had to settle for an abbreviated summer season. He split time between the Seattle Sweets and Palouse Coyotes of Pullman, playing in only about 20 games.

Utzman said he was thankful for the short time he had with the Sweets, because the team mostly was made up of fellow Division I recruits, so he got a glimpse of what he’ll see at the next level.

Travel ball has been a big part of Utzman’s baseball career going back to his Little League days. He played with the Pullman Pilots until eighth grade, and later with TBuck Training out of the Tri-Cities and Chaffey Baseball out of Seattle.

He’s also a mainstay for Pullman’s usual American Legion team, the Palouse Patriots, and of course the Greyhounds.

It was during one of his travel ball tournaments in Arizona that Utzman experienced his biggest baseball moment to date: the first time he clocked a 90 mph fastball.

Utzman was recovering from a minor arm injury, so he didn’t have much time to prepare for the tournament, but he knew he needed to do well to increase his recruiting chances.

He still remembers how he felt when he looked at the radar gun and saw the big “9-0.”

Utzman said his strength on the mound always was his velocity, but as he got older and the competition got tougher, he had to develop more pitches.

He started throwing a two-seam fastball more than the standard four-seam for additional movement, mixed in a slider and added a change-up.

“As I grew up, it was more my selection of pitches, being able to (get) movement on pitches,” Utzman said. “... Then, the change-up becomes one of the most important pitches you can throw, especially when you start facing higher competition.”

With the spring baseball season months away, it’s unknown what the sports landscape will look like when Utzman’s senior season rolls around. Pullman is conducting classes online and sports are stuck in an uncertain future.

But Utzman said Greyhounds coach Kevin Agnew keeps in close contact with the team. They’re keeping hope that they’ll be playing at Martin J. Quann Field in the spring.

“Usually, about once or twice a week, he’ll start a Google Meet with the seniors, ’cause we’re supposed to be like the captains of the team,” Utzman said. “He does a good job of trying to keep us together.

“I feel like he kind of gives us hope that we’ll have a shot to play this year and to just look forward to something.”