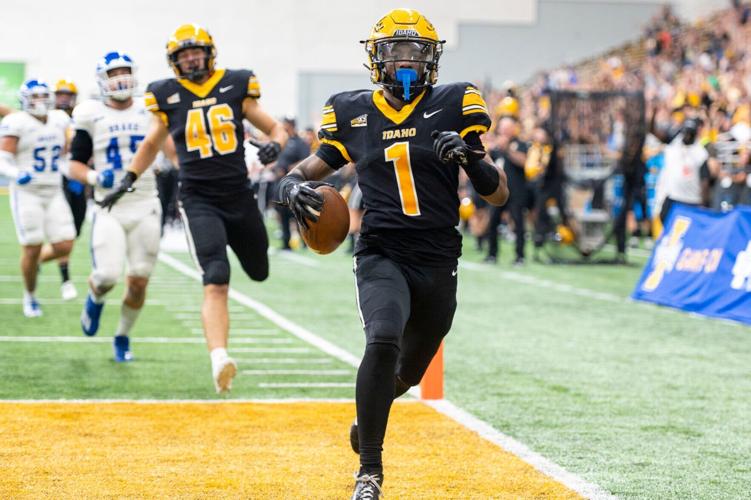 Idaho receiver Jermaine Jackson runs into the end zone after returning a punt 75 yards for a score during the third quarter of Saturday’s nonconference game against Drake. 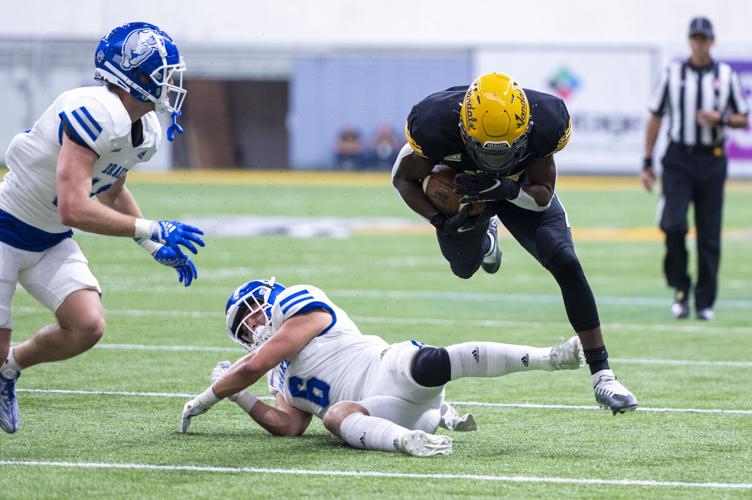 Idaho running back Anthony Woods jumps over Drake defensive back Tyler Radocha during the second quarter of Saturday’s nonconference game at the Kibbie Dome.

Idaho receiver Jermaine Jackson runs into the end zone after returning a punt 75 yards for a score during the third quarter of Saturday’s nonconference game against Drake.

Idaho running back Anthony Woods jumps over Drake defensive back Tyler Radocha during the second quarter of Saturday’s nonconference game at the Kibbie Dome.

No more questioning what is and what isn’t a moral victory — the Vandals officially have one in the win column as they beat Drake 42-14 in a nonconference game Saturday before 5,804 fans at the Kibbie Dome.

“That was a good win for us,” Idaho coach Jason Eck said. “The boys from Drake, the way we think of Indiana and Washington State, is how they look at us. They don’t play a Power Five team. We’re the big team that they play.”

Idaho did give fans a bit of a scare by putting itself in a 14-10 hole in the second quarter. The Vandals responded by scoring 32 answered points en route to the victory.

“I think we really responded well in the second quarter,” Eck said. “The guys really kicked it into gear and put us in a good position to respond.”

Here are some takeaways from the win:

Eck has preached the importance of special teams since he arrived. The unit had its best game of the season.

Ricardo Chavez went 4-for-4 on field goals, the unit notched a blocked punt and Jermaine Jackson returned a punt 75 yards for a touchdown.

“Today, special teams had a huge impact,” Eck said. “That was a great return by (Jackson) and (Chavez) has been outstanding.”

Jackson had his best outing to date, leading the Vandals with 92 receiving yards and catching his first touchdown of the season.

McCoy found Jackson for a 22-yard score to put the Vandals up 7-0 in the early stages.

“It was time to show everybody what we could do,” Jackson said. “We wanted to just go out there and have fun out there.”

He almost added another score in the fourth quarter after a 64-yard shovel pass from freshman quarterback Jack Layne.

Idaho had 177 yards rushing, and freshman Anthony Woods had his best outing of the season, rushing 11 times for 82 yards.

“He was good today, man,” Eck said, chuckling. “When you look at playing time, I feel like players make decisions on playing time. We just watch the tape and evaluate what we see and if you keep making plays, your role is going to expand.”

Almost all of Idaho’s backs got in on the action, with Roshaun Johnson, Elisha Cummings, Zach Borisch and Trent Elstad all receiving carries.

The run game was complemented by excellent play from the line. Idaho’s hogs reached the second level successfully, allowing Woods and Co. to break off chunk runs to extend drives.

“When everyone does their job, we’ve had pretty good success,” Eck said. “It’s a battle between ourselves not to be perfect but to play as best as we can.”

No controversy at QB

Layne took some snaps at quarterback during the second quarter as the Vandals were down, but also finished the game under center.

But Eck assured the fan base McCoy still is QB1.

“We planned all week to start using guys that we plan to redshirt and use that four-game rule to develop them,” Eck said. “We had five freshmen play in the first half that we had designated for this game. You want to use those games to help develop those guys. We have no quarterback controversy. (Gevani) is our starter.”

Once again, the defense forced turnovers.

Paul Moala notched an interception in the second quarter off a tipped pass, and Murvin Kenion III picked one off in the fourth to bring Idaho’s season total to seven. The Vandals have a plus-5 turnover margin.

The new “reimagined” entrance at the Dome lived up to expectations, as well as the hype video.

As the team prepared to run onto the field, Eck was front and center. Once the team charged out, he had to break his stride a bit, clearly in an attempt not to embarrass his players.

JERMAINE JACKSON led the Vandals with three catches for 92 yards and a score. He also returned a punt for a touchdown.

ANTHONY WOODS was Idaho’s bellcow on the ground, racking up 83 yards on 11 carries.

RICARDO CHAVEZ went 4-for-4 on field goals and had one punt downed inside the 20 yard line.

Gevani McCoy hooked up with Jermaine Jackson for a 22-yard score in the first quarter, the first time the duo connected for a touchdown, the first score of the game.

Jackson took a 60-yard shovel pass from freshman quarterback Jack Layne to the 15-yard line leading to an Elisha Cummings touchdown for the final margin.