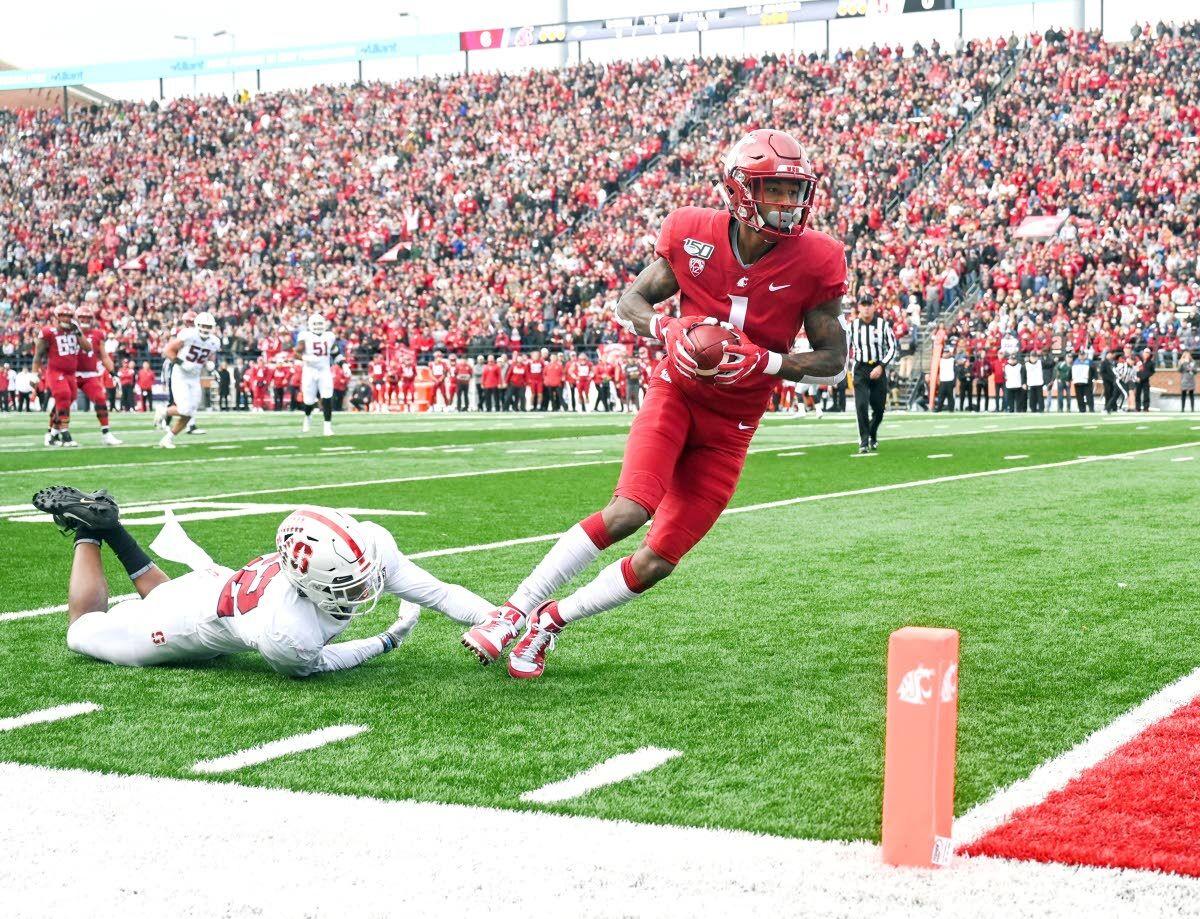 Pete Caster/Daily NewsTay Martin scores a touchdown against Stanford in this photo taken Nov. 16, 2019, at Martin Stadium in Pullman. Martin has since taken his talents to Oklahoma State via the NCAA’s transfer portal. 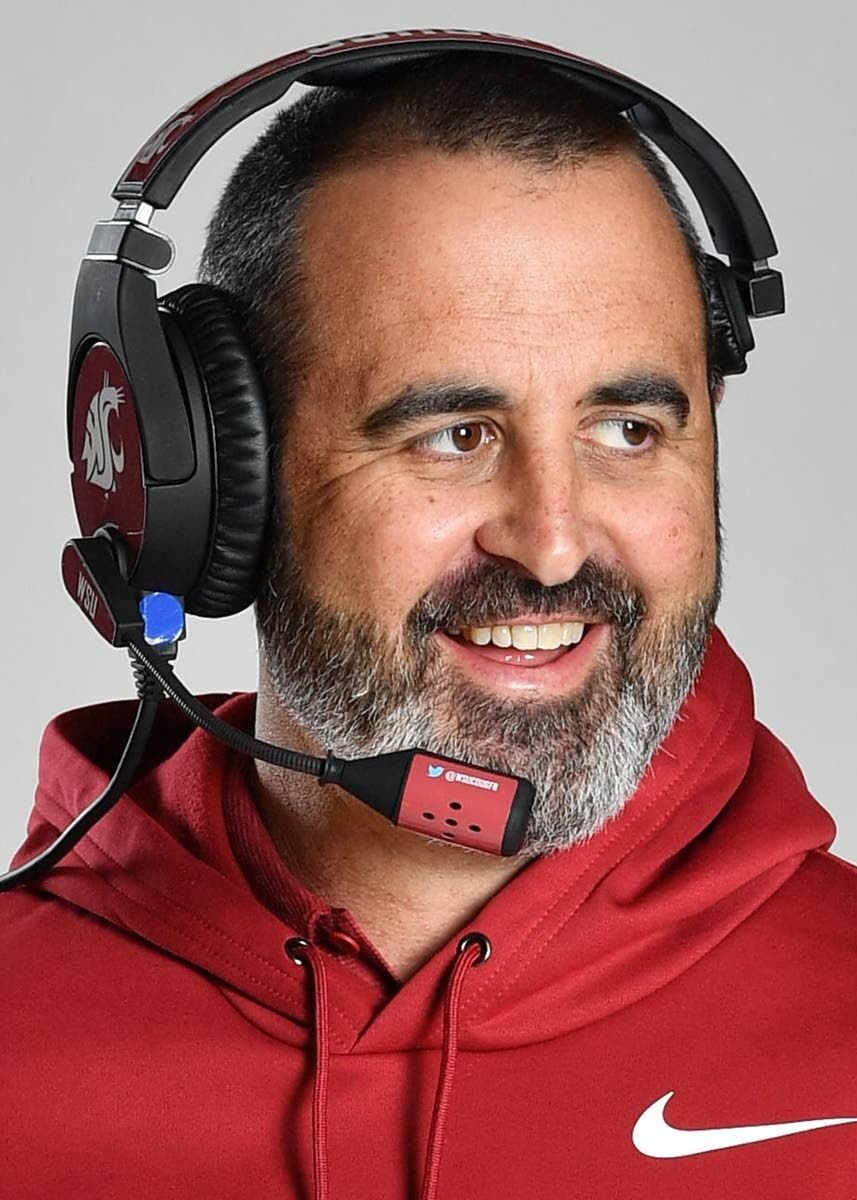 For Washington State during the past 15 months, those and other factors have led, yes, to an unusual amount of traffic in the NCAA transfer portal.

To date, 14 Cougars have entered the portal since Nick Rolovich was hired in January 2020, and only five have joined his program by the same means.

But in terms of the caliber of the roster, it’s difficult to read any kind of the bottom line in the numbers. Of the 14 departees, six have yet to hook up with other schools. And if you look strictly at exchanges between Power Five conference programs, the Cougars have gained five players and lost only two.

Rolovich himself doesn’t necessarily talk about the numbers.

“I feel that if someone doesn’t want to be here, then they should go,” he said recently, “and I don’t want want to force anyone to come here as a recruit.

“I went through a little bit of this at Hawaii,” he said of his previous school, “which was, to be honest, harder on me personally just because it was the first time. And that thing worked out all right. The guys that left, if that’s the best thing for them, that’s what they need to do.”

At this point, the most significant loss appears to have been outside receiver Tay Martin, who transferred to Oklahoma State in August. The move put him closer to his home in Louisiana, and it came a week after WSU’s conference, the Pac-12, had scrapped athletic competition for the rest of the year because of the coronavirus pandemic.

The conference later changed its mind and played a limited season, but Martin’s jump to the Big 12 meant he got a chance to practice and play sooner and longer than Wazzu players did. Still, it took him a while to adjust to a new system. He made 15 catches for the Cowboys, including six in their win against Miami in the Cheez-It Bowl — a bit of redemption after he’d been held to one reception for WSU in a loss to Air Force in the same bowl in 2019.

In any case, the Cougs could have used him in 2020. They lacked experience and production at outside receiver during a difficult 1-3 season.

But only one other of the 14 ex-Cougars has found a home in the Power Five — quarterback Gunner Cruz at Arizona — and only two wound up in the Group of Five: placekicker Blake Mazza at SMU and defensive lineman Will Rodgers III at Temple.

Of the rest, only one other made a Football Bowl Subdivision roster: safety Skyler Thomas at Liberty.

Three others stepped down to the Football Championship Division. They include receiver Kassidy Woods, who entered the portal in September after an awkward phone conversation with Rolovich drew national attention (of the 14 departed Cougars, he’s the only one who publicly expressed disgruntlement when leaving) and ended up at Northern Colorado. The others were defensive lineman Cosmas Kwete, who joined his twin brother at Northern Arizona, and receiver Mike Pettway, who went to Jacksonville State.

On the other side of the ledger, all five new Cougars from the portal came from Power Five programs, and four of them are participating in spring drills, whose Crimson and Gray scrimmage is set for 2 p.m. Saturday in Pullman.

Those four are Jarrett Guarantano, a 32-game starter for Tennessee who’s competing for a No. 1 quarterback role as a graduate transfer; junior cornerback Chris Jackson, who’s drawing plenty of buzz this spring after tranferring from Michigan State; senior linebacker Ben Wilson from Texas Christian; and junior outside receiver CJ Moore, who’s essentially a swap for Martin from Oklahoma State.

The latest portal dweller to commit to WSU is sophomore running back Nakia Watson, who rushed for 191 yards last year for Wisconsin and will join the Cougars in the fall.

If that 2021 season marks a return to normalcy in college sports, it might become easier to assess Wazzu’s portal adventures of the past few months. But they’ve clearly made an impression on the Cougars, who in February became the first college football progam to hire a coach designated as “director of transfer recruiting.” It was handed to Josh Omura, who’d been part of Rolovich’s recruiting team at Hawaii.

In the meantime, Rolovich has his own criteria for assessing the recent comings and goings.

“I feel like our team right now is as close as it’s been ever since I’ve been here,” he said. “I know I haven’t been here very long, but I know it’s a different team than we had in the fall, just energy-wise and the camaraderie side of things. I’m not going to say everybody, because you never know, but I think the majority of people have got both feet in and are excited to get a season going in the fall.”