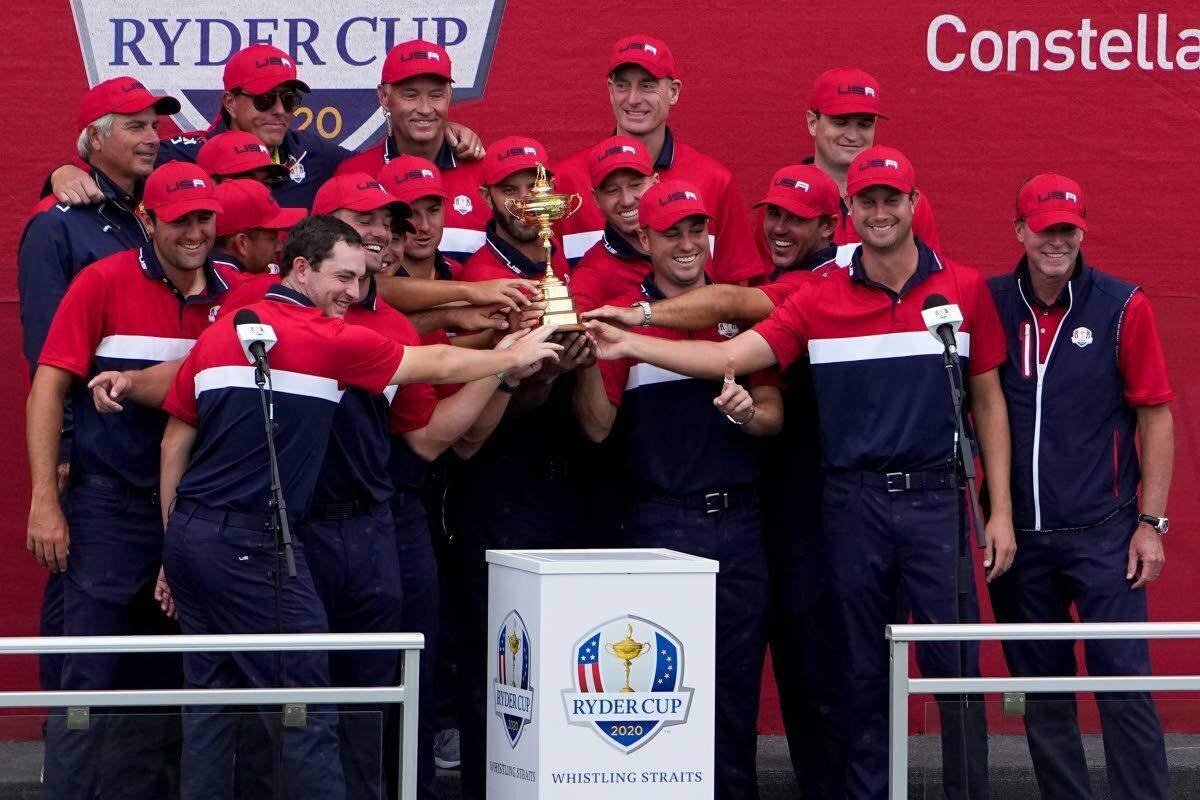 Team USA poses with the trophy at the closing ceremony after the Ryder Cup matches at the Whistling Straits Golf Course Sunday, Sept. 26, 2021, in Sheboygan, Wis. (AP Photo/Jeff Roberson) 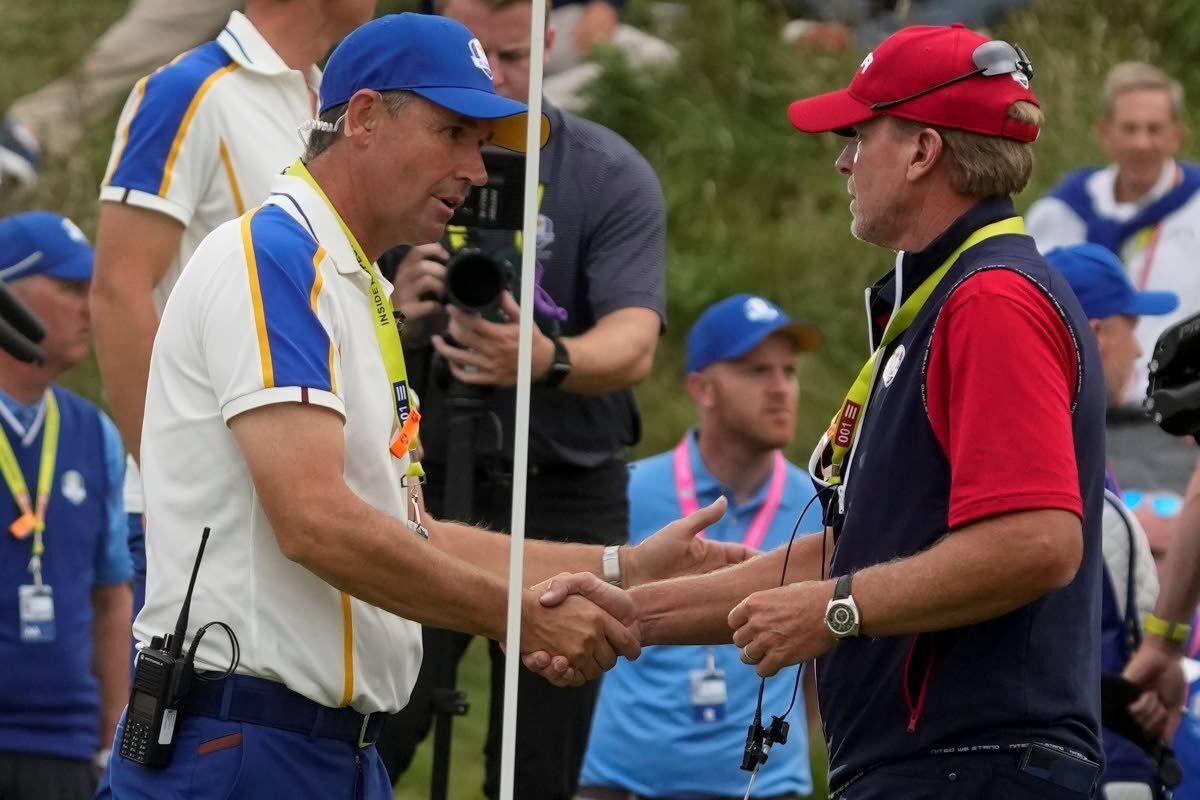 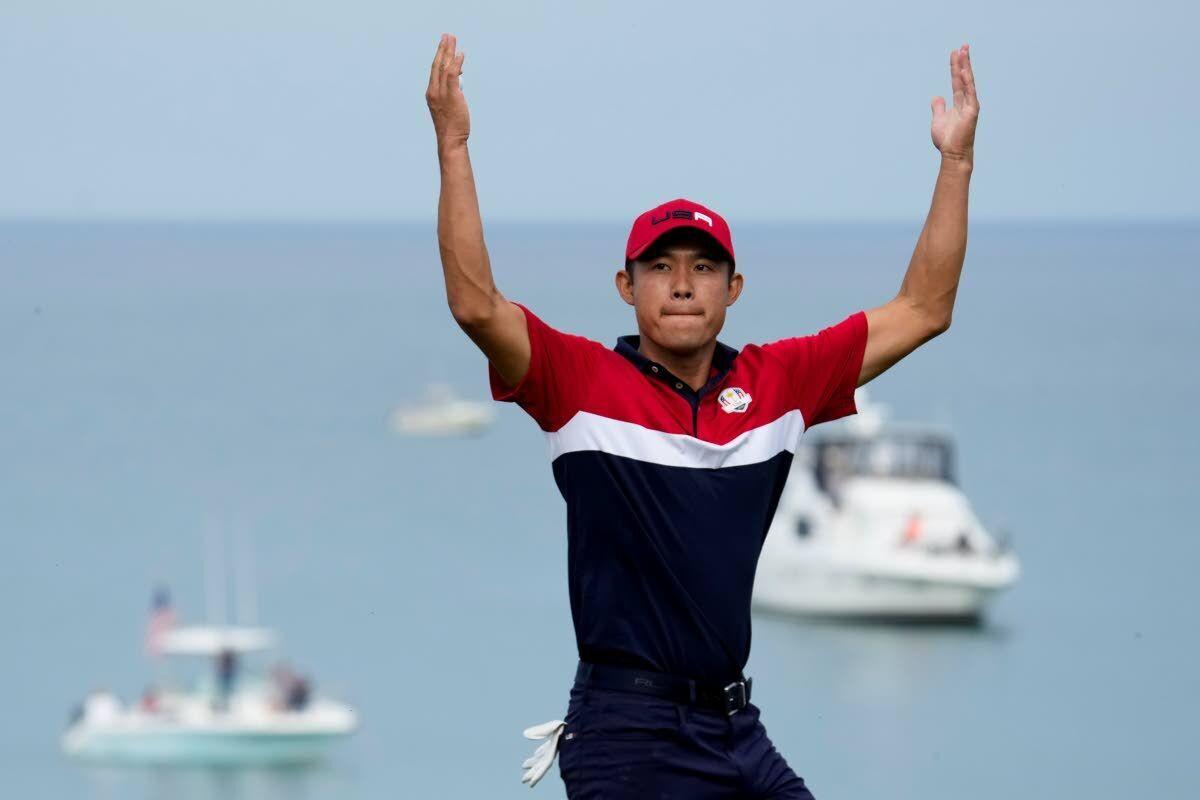 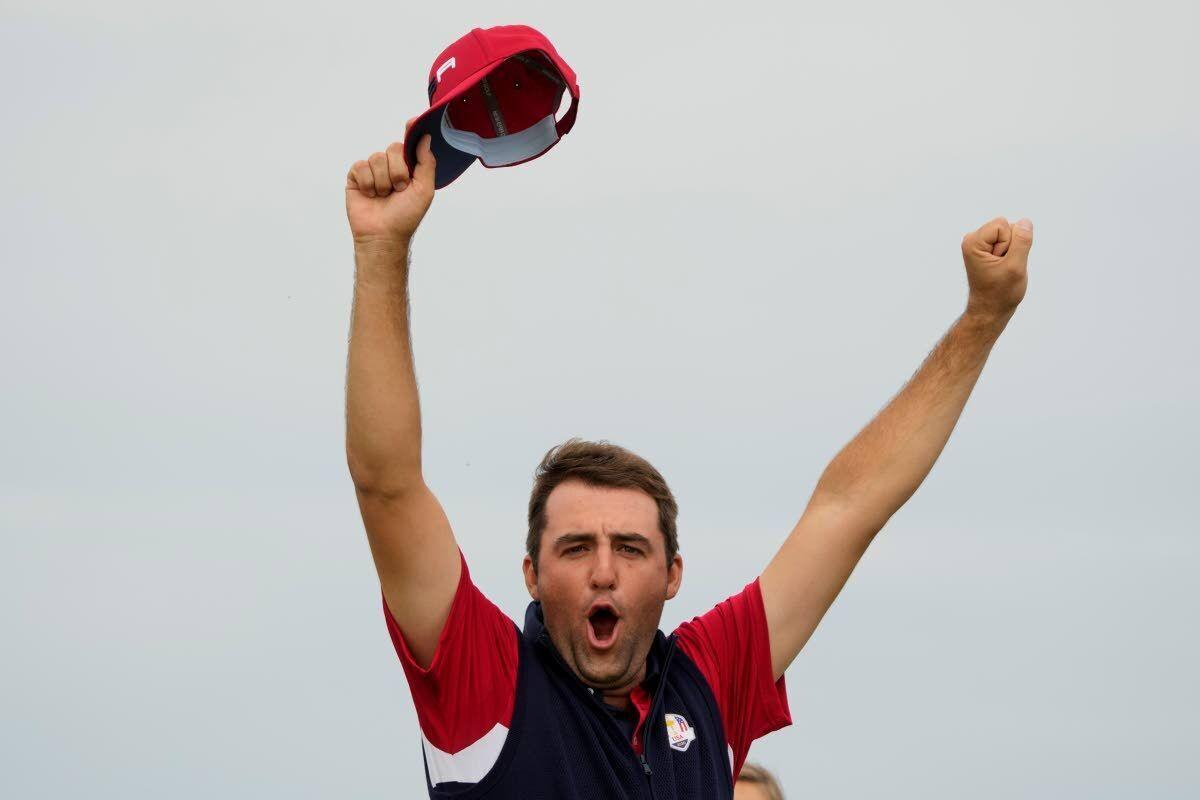 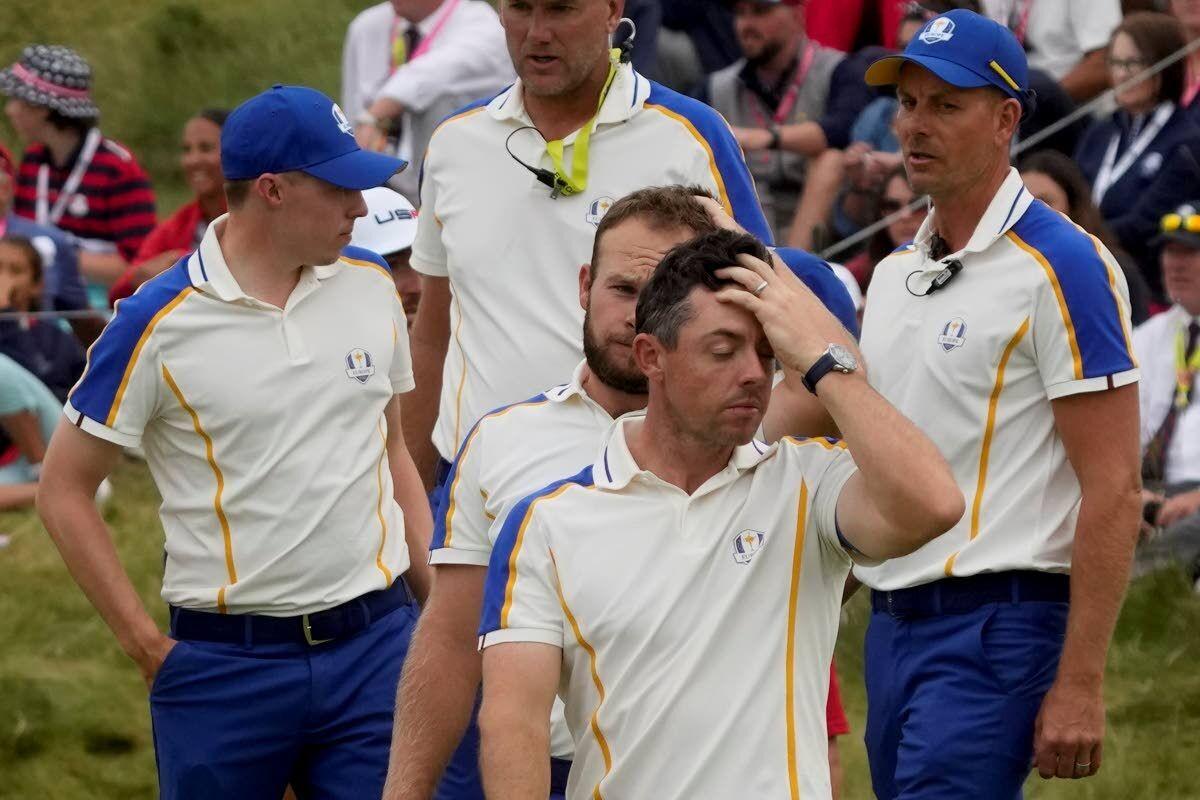 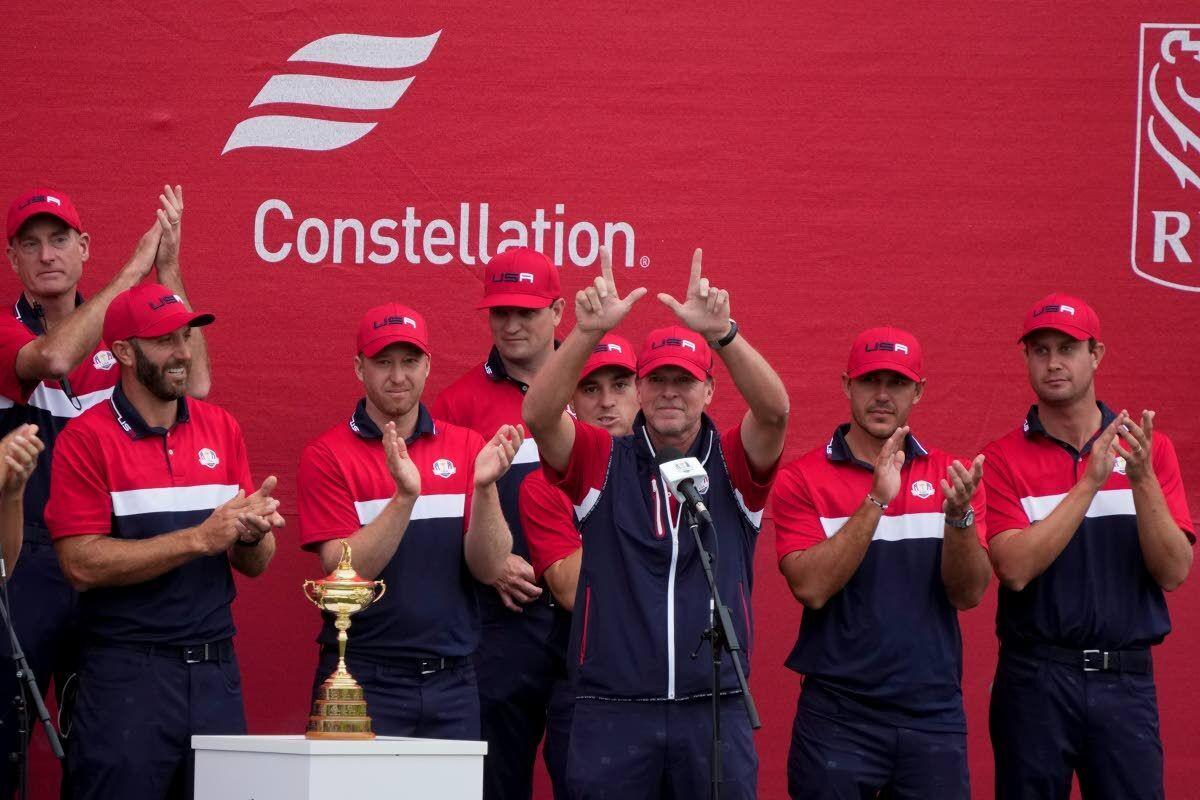 Team USA poses with the trophy at the closing ceremony after the Ryder Cup matches at the Whistling Straits Golf Course Sunday, Sept. 26, 2021, in Sheboygan, Wis. (AP Photo/Jeff Roberson)

SHEBOYGAN, Wis. — Steve Stricker hoisted the Ryder Cup, gold and glorious, for all to see. Then, he quickly huddled his young American team together to make sure all 12 players had their hands on it.

Nine of them had never touched the 17-inch trophy in a moment of celebration.

They don't expect it to be the last time, either.

More than just winning back the Ryder Cup on Sunday, the youngest U.S. team in history handed Europe its worst loss and delivered a strong message about how serious it is about changing the tone of these matches.

Daniel Berger won the final hole in the final match for the final point in a 19-9 victory, breaking by a half-point the record margin since Europe became part of the Ryder Cup in 1979.

“This is a new era,” Stricker said. “These guys are young. They want it. They’re motivated. They came here determined to win. I could see it in their eyes.”

The six U.S. Ryder Cup rookies scored more points than all of Europe, combining for a 14-4-3 record. The Americans didn't lose a session for the first time in 44 years. Dustin Johnson became the first American to go 5-0 since 1979.

They had the best team on paper. They played better on grass.

“It’s not just the strongest U.S. team I’ve seen, but they all played well this week,” Lee Westwood said. “Everybody performed and turned up this week. Looks like they are a team.”

The Americans finally looked like Europe, which has dominated the Ryder Cup by winning nine of the past 12 until getting routed along the shores of Lake Michigan.

Staked to a six-point lead — no team has rallied from more than four points going into the final day — the Americans quickly filled the scoreboards with their red numbers.

Scottie Scheffler took down the No. 1 player in the world with a 4-and-3 victory against Jon Rahm. Scheffler won the opening four holes and birdied five of the first six. He was among three rookies who were unbeaten this week.

Bryson DeChambeau smashed his tee shot on the 373-yard opening hole onto the green, then holed the 40-foot eagle putt to start his win against Sergio Garcia.

The clinching blow came from Collin Morikawa, at 24 the youngest player on the team and already a two-time major champion. He made a 3-foot birdie putt on No. 17 that assured the Americans at least the 14 1/2 points they needed.

“I woke up this morning and I was trying to tell the guys, ‘Let’s get to 20 points,’ because this is going to be the next era of Ryder Cup team for the U.S. side," Patrick Cantlay said after he completed an unbeaten week with a win against Shane Lowry.

"We’ve got a lot of young guys. I think they’re going to be on teams for a long time, and I wanted to send a message.”

Tony Finau had said on the eve of these matches that this was “the big one." The Americans had so many fresh faces without any lasting scars from watching Europe celebrate so much through the years. It was a chance to change the culture, and this was a massive step.

The gallery saved one of its loudest cheers for Stricker, the Wisconsin native who has been at the helm of two blowouts. He guided the U.S. team to a 19-11 victory in the Presidents Cup in 2017 and added his signature piece at Whistling Straits.

Johnson became the first American since Larry Nelson in 1979 to win all five matches, completing his perfect week by beating Paul Casey in a match he never trailed.

Casey, Matt Fitzpatrick and Bernd Wiesberger all failed to win a point. Rory McIlroy and Ian Poulter, part of the backbone of European experience, didn't win a match until singles, and by then it was too late.

The Americans were young, yes, and good, with four of the top five in the world ranking. They finally played like it. Those four players — Johnson, Morikawa, Cantlay and Xander Schauffele — combined for a 14-1-2 record.

Stricker wasn't the only one in tears.

McIlroy led off again for Europe and gave Schauffele his first loss of the week. It wasn't enough. All day along the shores of Lake Michigan, the outcome was inevitable.

McIlroy teared up in his interview when talking about how much the Ryder Cup means to him.

“I've never really cried or got emotional over what I've done as an individual. I couldn't give a (expletive)," he said on NBC. "But this team ... to see Sergio break records, to see Jon Rahm come into his own this week, to see one of my best friends, Shane Lowry, make his Ryder Cup debut, all that. It's phenomenal.

“I'm disappointed that I didn't contribute more this week. But in two years' time, we'll go again and give it another go. Sorry for swearing, as well.”

As much as this was about a new generation of Americans, this looked to be an aging team of Europeans. They brought winning experience but not enough form.

Garcia set the Ryder Cup record with 25 matches won in his career. Rahm was the star for Europe, living up to his billing as the No. 1 player by making so many big putts.

Each lost in singles.

There was little Europe could have done. This U.S. team was loaded and played like it.

“The U.S. were very strong," European captain Padraig Harrington said. “Whatever their plan was, they got it right this week. A strong team, played well. Kept the momentum. And they would have been tough to beat at the best of times, let alone when they are at top form. It’s a great win for them.”

The Americans won consecutive home matches for the first time since 1983. The next step is winning on the road, which the Americans haven’t done since 1993.

The Ryder Cup goes to Marco Simone in Italy in 2023.

“If we play like we did this week," Jordan Spieth said, “the score will look the same over there.”