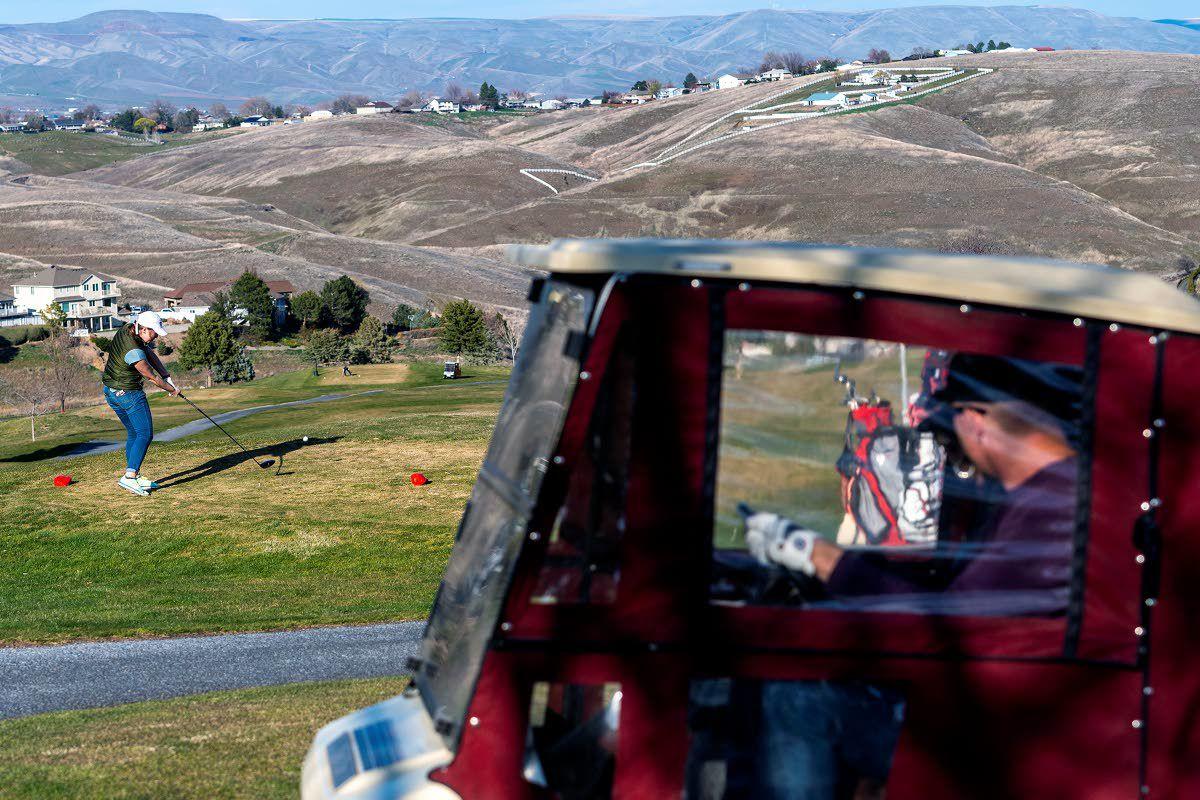 With part of her four-some looking on from their cart, Kristen Carey, of Coeur d’Alene, tees off on the third hole Friday at Quail Ridge Golf Course in Clarkston. 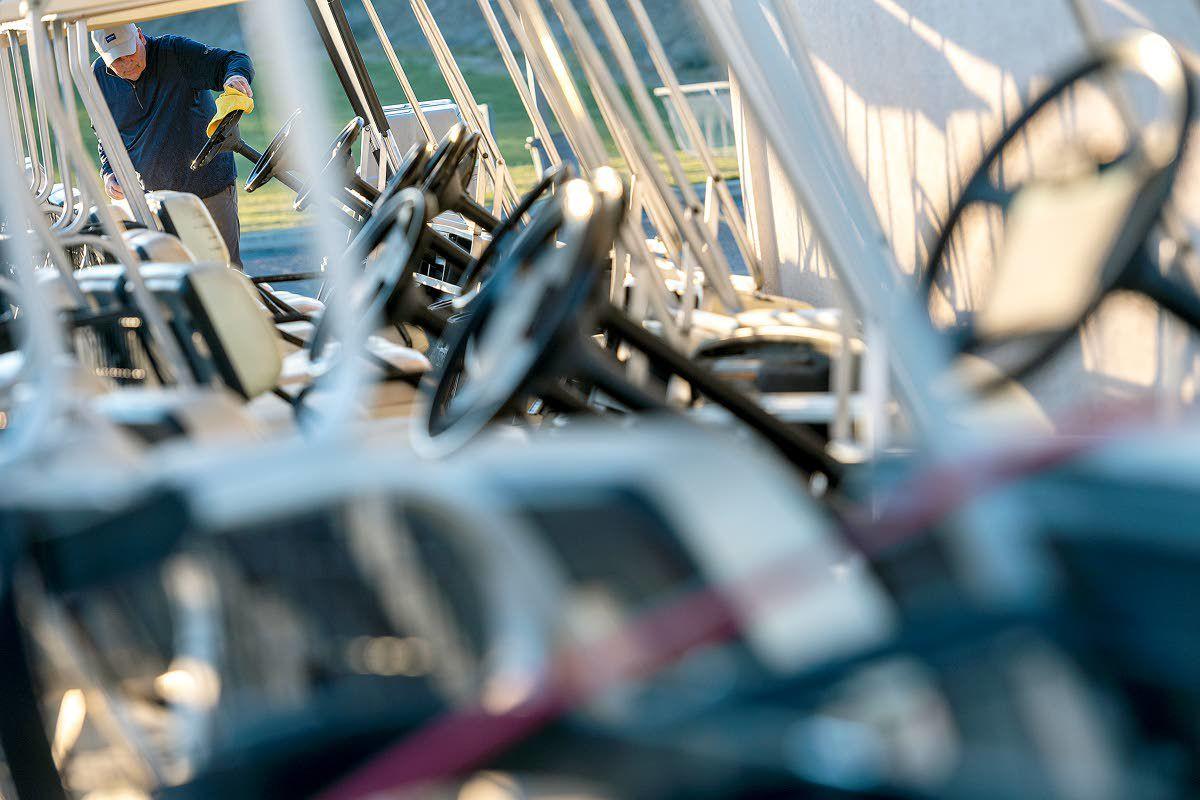 Rod Carlson, the golf pro and co-owner of Quail Ridge Golf Course in Clarkston, cleans off one of the golf carts after being used on Friday evening. Carlson wipes down every cart used on the course once it’s returned.

With part of her four-some looking on from their cart, Kristen Carey, of Coeur d’Alene, tees off on the third hole Friday at Quail Ridge Golf Course in Clarkston.

Rod Carlson, the golf pro and co-owner of Quail Ridge Golf Course in Clarkston, cleans off one of the golf carts after being used on Friday evening. Carlson wipes down every cart used on the course once it’s returned.

The concept of the 19th hole might be placed on hold, but otherwise golf courses in north central Idaho and southeastern Washington are in full swing despite the coronavirus pandemic.

The emphasis is on the game itself, not the socializing that often goes hand-in-hand with it.

“Gyms are shut down, and a lot of hobbies are shut down, so we’re seeing a lot of casual golfers — people you might not normally see this time of year,” said Andrew Elaimy, head golf professional at the University of Idaho Golf Course, which opened for the season Thursday in Moscow.

Business could be worse, officials for several courses said.

With much of the sports world in hibernation to lessen the risk of spreading the virus, and with many people developing cabin-fever while working from home, golf pros and officials are characterizing their sport as a relatively safe physical outlet. It’s contested outdoors, where the risk of contagion is lower, and it’s an individual sport that chimes with the idea of social distancing that health experts are recommending.

“It’s actually been good,” said Carolyn Manfull, clubhouse manager at Orofino Golf and Country Club, which opened its season March 1. “I think it’s been good for people to get out in the fresh air. They’ve enjoyed being outside.”

Palouse Ridge Golf Club in Pullman is also open with limitations, such as allowing one guest at a time in the pro shop and one guest per golf cart.

Some cities across the nation have forced golf courses to close temporarily, but the United States Golf Association has given its blessings to those that remain open.

“We all love the game for the escape it provides, and it is our great hope that we will all be able to play it, watch it and enjoy it together soon,” the USGA said in a statement Friday. “We continue to urge everyone to follow the guidelines from health and government officials to keep you and those around you safe, and to minimize any possible exposure to coronavirus.”

A priority is being placed not only on social distancing but on maintaining a clean environment, officials said. Objects are being removed that generally are touched by multiple users, such as sand-bunker rakes, putting-green pins and coffee machines. Counters are being sanitized after every use, officials said, and in some cases modified to maintain a 6-foot distance from clients. Also sanitized repeatedly are course-owned golf carts.

“It’s a real nuisance but it’s necessary,” Carlson said. “We’re taking every precaution, and following the guidelines that everyone is following that has a business.”

Quail Ridge, according to Carlson, is being especially vigilant about cleanliness because of its prevalence of older clients, who are more vulnerable to the harshest symptoms associated with the coronavirus.

As for social distancing, golfers are being discouraged from congregating in clubhouses or elsewhere. Restroom use is limited to one person at a time. There’s less of an effort to combine groups of golfers to fill out foursomes.

Although several courses are allowing their weekly men’s and women’s clubs to compete as usual, some of them have canceled tournaments involving nonmembers or nonregulars.

“So far, we haven’t (had) any problems, and we’re just hoping that will continue,” Manfull said “We’re also trying to be very careful. We aren’t going to do any big tournaments or gatherings where people would be in the clubhouse. We’re taking every measure possible, so hopefully we’ll be able to stay open. But if things get worse, it could happen that we close.”

Golf courses that serve food are facing particular challenges, especially in Washington, where sit-down dining is being disallowed.

A spokesman for Lewiston Golf and Country Club said Thursday its restaurant remains open, as does the course itself. Briney said Bryden Canyon also has continued to serve food in a sit-down setting. Most of the food served at the Orofino course is takeout anyway.

Across the border, Clarkston Golf and Country Club is open for golf but has closed its clubhouse and isn’t offering food, an official said. A spokesman for Palouse Ridge Golf Club, which is maintaining normal golf hours, said the course doesn’t serve food, and a nearby food truck only serves takeout.

Quail Ridge is going strictly takeout with its snack bar.

“If they’re playing, they can call in an order,” Carlson said. “They can come in and take it with them. You can’t congregate or anything. We definitely see a hit in our food sales. The number of people on the course, it’s probably not as busy as normal, but it’s OK. Our bottom line is going to be affected but we’re going to survive.”

Compared with many other businesses in the area, he said, “We’re one of the lucky ones. We can keep operating.”