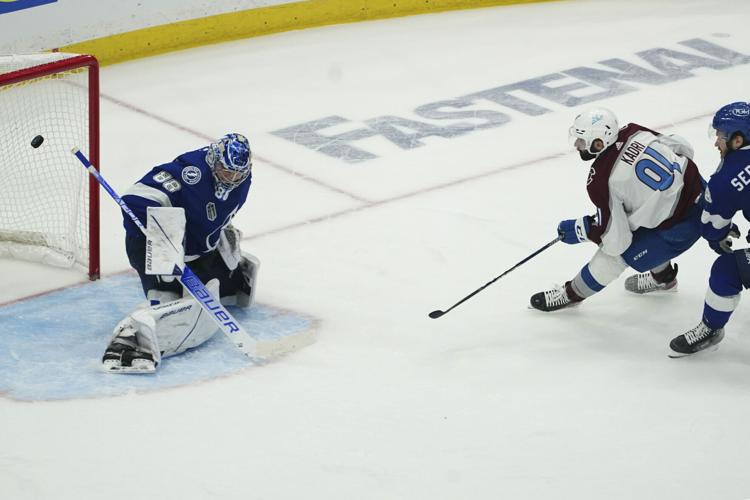 Colorado Avalanche center Nazem Kadri (91) shoots the puck past Tampa Bay Lightning goaltender Andrei Vasilevskiy (88) for a goal during overtime of Game 4 of the Stanley Cup Final on Wednesday in Tampa, Fla. 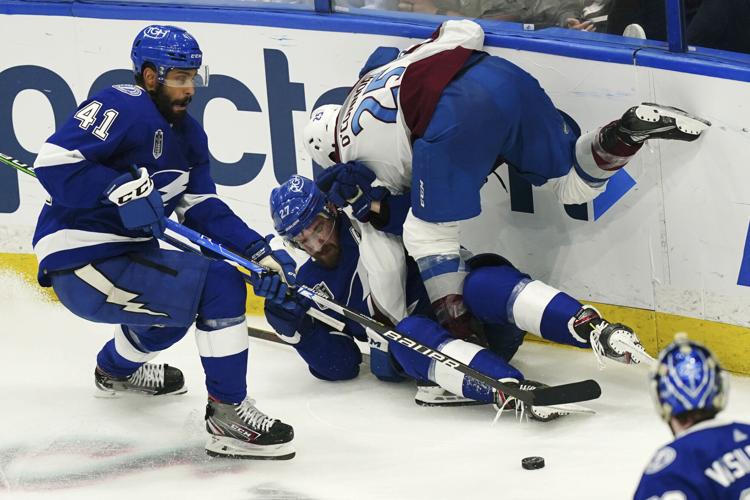 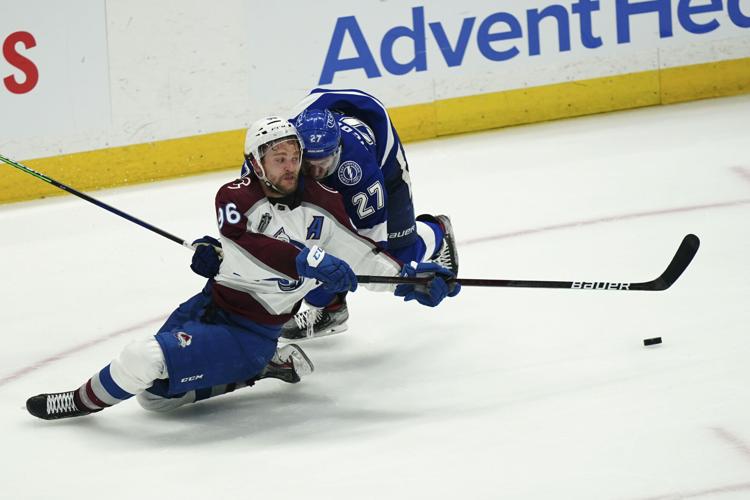 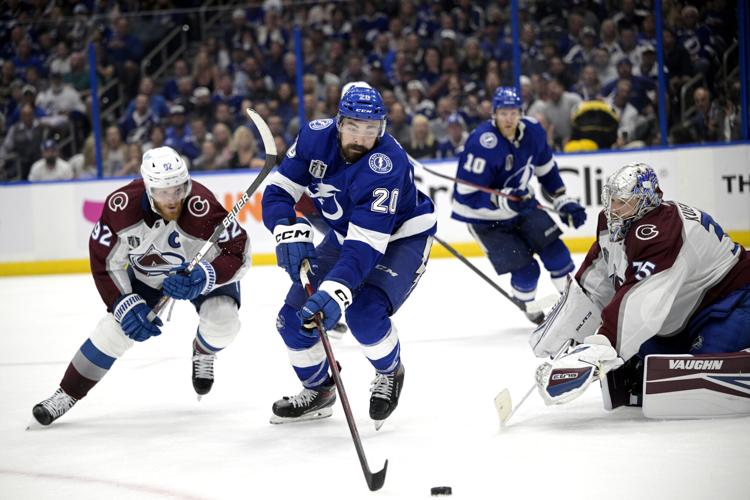 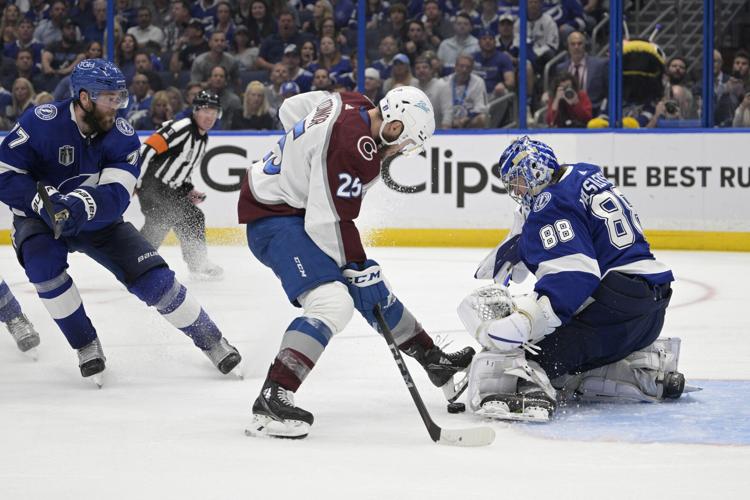 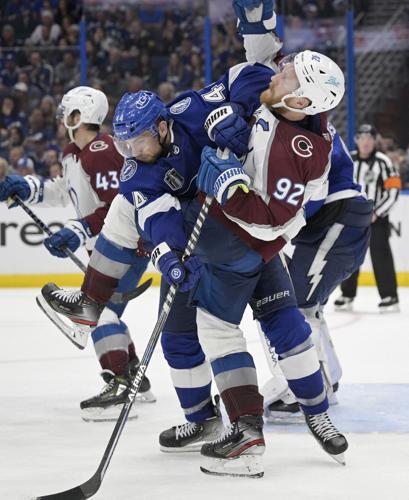 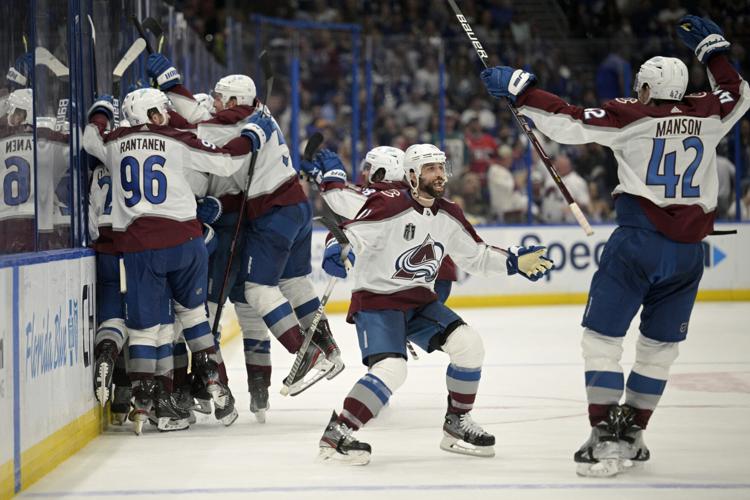 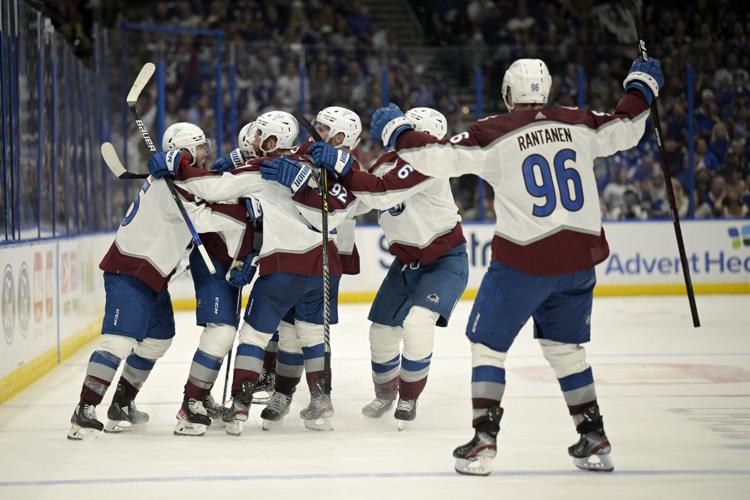 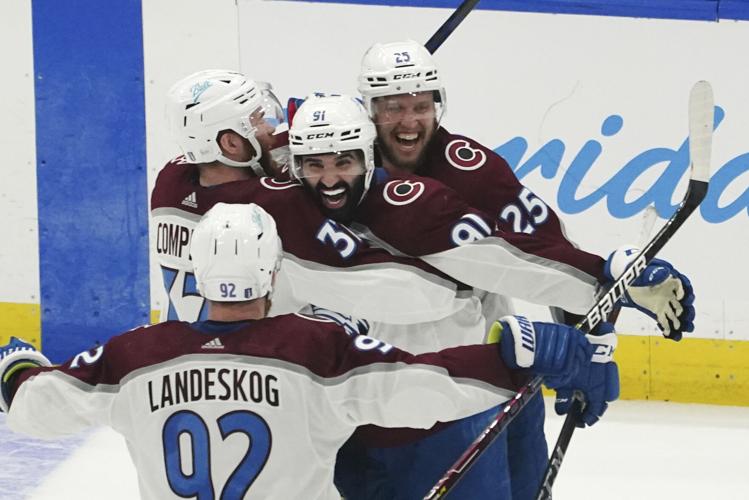 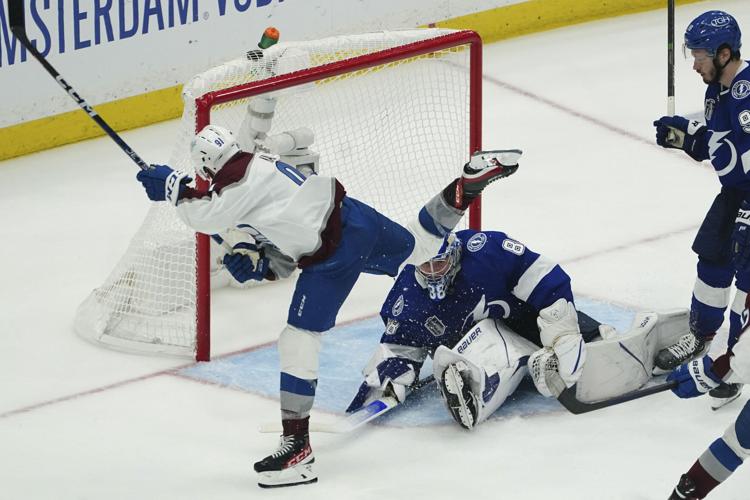 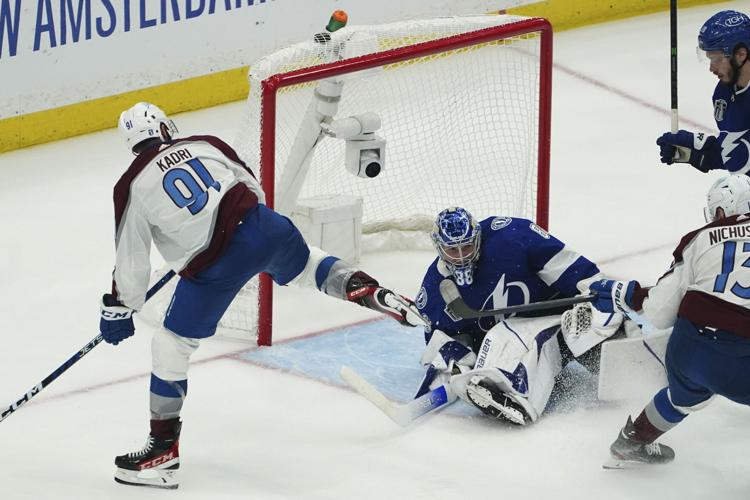 Colorado Avalanche center Nazem Kadri shoots the puck into the top of the goal past Tampa Bay Lightning goaltender Andrei Vasilevskiy (88) for a goal during overtime of Game 4 of the NHL hockey Stanley Cup Finals on Wednesday, June 22, 2022, in Tampa, Fla. (AP Photo/John Bazemore)

Colorado Avalanche center Nazem Kadri (91) shoots the puck past Tampa Bay Lightning goaltender Andrei Vasilevskiy (88) for a goal during overtime of Game 4 of the Stanley Cup Final on Wednesday in Tampa, Fla.

Colorado Avalanche center Nazem Kadri shoots the puck into the top of the goal past Tampa Bay Lightning goaltender Andrei Vasilevskiy (88) for a goal during overtime of Game 4 of the NHL hockey Stanley Cup Finals on Wednesday, June 22, 2022, in Tampa, Fla. (AP Photo/John Bazemore)

TAMPA, Fla. — The Colorado Avalanche are on the brink of their first Stanley Cup title since 2001, thanks to Nazem Kadri’s overtime goal.

Even if the two-time defending champion Tampa Bay Lightning don’t believe it should have counted.

Kadri scored at 12:02 of the extra period to give Colorado a 3-2 victory in Game 4 of the Stanley Cup Final and move the Avalanche within a win of their first championship in over two decades.

Without specifically saying Tampa Bay felt Colorado had too many men on the ice for the winning goal, Lightning coach Jon Cooper suggested the goal should not have been allowed.

“We’re all in this together. Players, coaches, refs, everybody. But this one is going to sting much more than others,” Cooper said.

“It’s going to be hard for me to speak. ... I’ll speak with you (today). You’re going to see what I mean when you see the winning goal,” Cooper added. “And my heart breaks for the players. Because we probably still should be playing.”

The NHL didn’t immediately respond to a request for comment.

Back in the lineup after being sidelined since June 4 with a thumb injury, Kadri skated in on Andrei Vasilevskiy and slipped a shot under the goaltender’s right arm to give Colorado a 3-1 series lead.

“That was a huge win. A resilient win,” said Kadri, who had been sidelined since being injured during Game 3 of the Western Conference final against Edmonton.

“I’ve been waiting for this my whole life,” the Colorado center added. “I figured it was time to join the party.”

The Avalanche outshot the Lightning 11-3 in the extra period. Vasilevskiy stopped Logan O’Connor on a breakaway, and Colorado had a shot clang off the post and another hit the crossbar before Kadri ended it.

Game 5 is Friday night in Denver, where Colorado won the first two games of the series and is 7-2 this postseason.

Anthony Cirelli scored 36 seconds into the game and Victor Hedman also scored in regulation for the Lightning. They took a 2-1 lead into the third period.

Nathan MacKinnon scored on a second-period power play for Colorado, and Andrew Cogliano tied it early in the third.

Darcy Kuemper, pulled from Game 3 after giving up five goals in a 6-2 loss, stopped 37 shots and had an assist of the winning goal for the Avalanche.

Vasilevskiy finished with 35 saves. He has rebounded from allowing 11 goals in Games 1 and 2 to limit the high-scoring Avalanche to five the past two games.

The Lightning are trying to become the first team to win at least three straight Stanley Cup titles since the New York Islanders won four in a row from 1980-83. The Avalanche last hoisted the Cup in 2001.

The Lightning have rebounded from playing poorly in Games 1 and 2 to make it interesting by neutralizing Colorado’s speed, limiting the Avalanche’s scoring opportunities and turning up the pressure on Kuemper, who was barely tested when he faced just 16 shots in a 7-0 blowout in Game 2.

Cirelli’s goal was the fastest in a Stanley Cup Final since 2006, and the Lightning set the tone for another busy night for Kuemper by outshooting the Avalanche 17-4 in the opening period. Two of Colorado’s shots came while skating short-handed, killing off Tampa Bay’s first power play of the night.

MacKinnon’s first goal of the series — 12th of the playoffs — erased Colorado’s early deficit at 5:17 of the second period. The Avalanche pulled even again when Cogliano, assisted by Nico Sturm and Darren Helm, scored on a deflection less than three minutes into the third.

Kadri returned to the lineup after missing four games. He had been out since injuring his thumb when he was boarded by Evander Kane in Game 3 of Colorado’s sweep of Edmonton in the Western Conference final.

Kane received a major penalty and was suspended a game.

Mikko Rantanen and Cale Maker assisted on MacKinnon’s goal, giving both of them 20 this postseason — a franchise record for a single playoff year. Peter Stastny had 19 with Quebec in 1985.