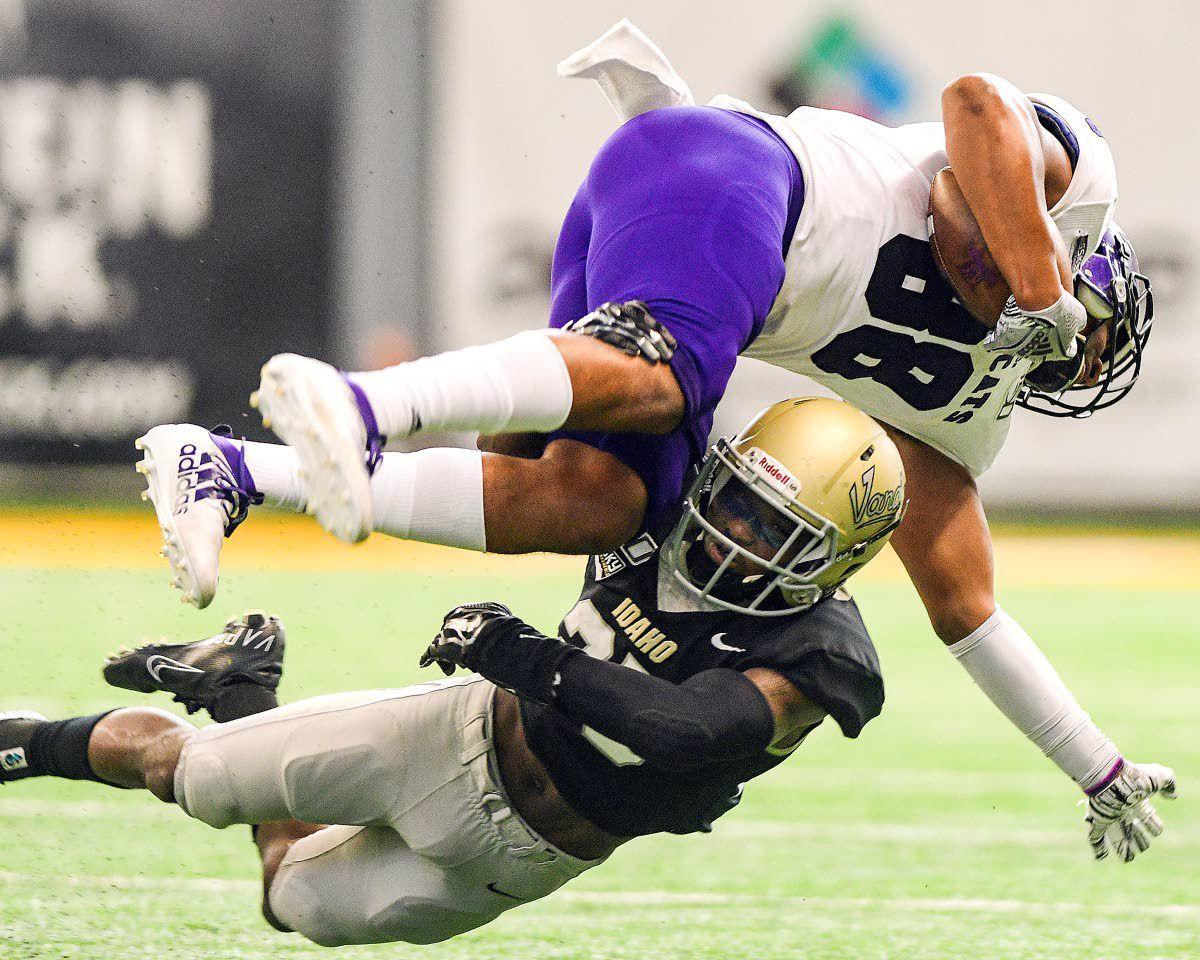 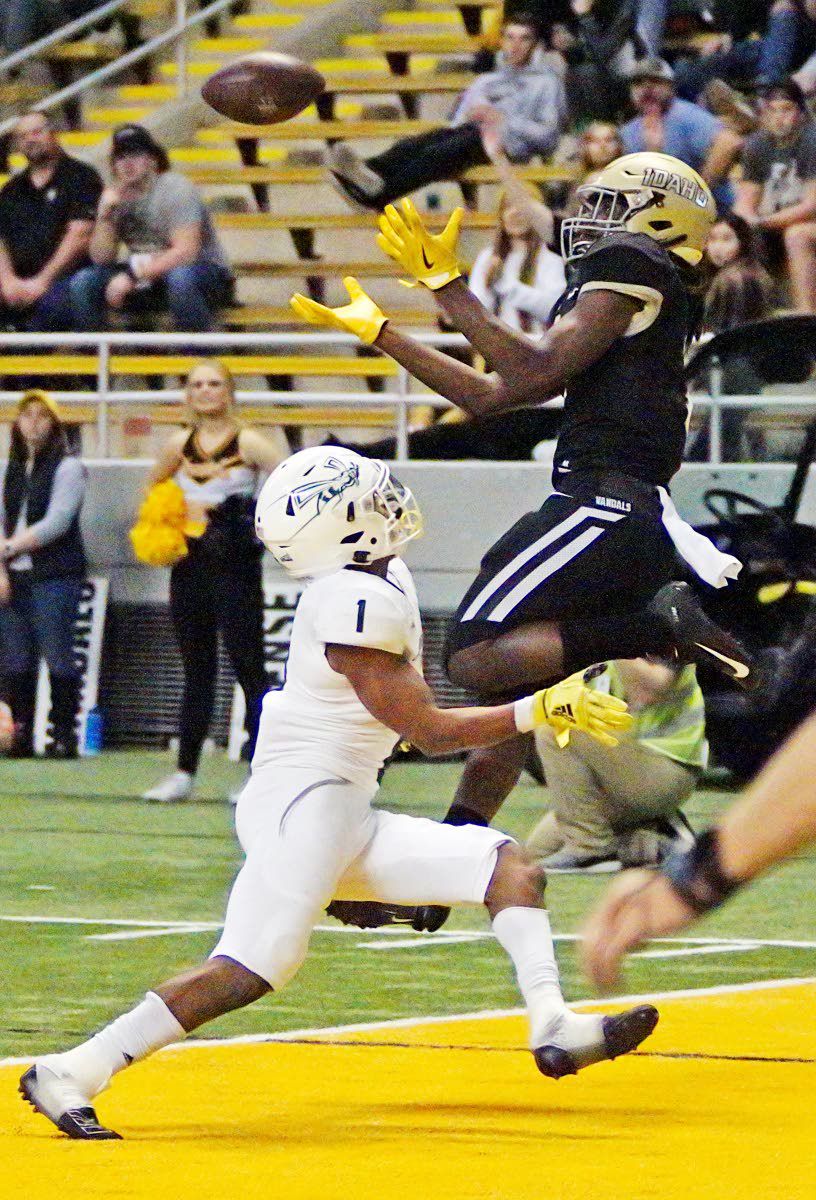 Editor’s note: The second part of a position-preview package on Idaho’s football team examines position battles at spring camp, provided the Vandals even hit the turf.

Amid concerns about the spread of the coronavirus, the Big Sky Conference announced Wednesday that spring competitions have been canceled and practices postponed until at least late in the first week of April, when the conference and campus administrators will reconvene.

In terms of the product UI hopes will see the field before fall: The secondary, offensive line and group of receivers feature the most questions.

With all-leaguer Lloyd Hightower’s graduation and the sudden transfer of breakout sophomore Christian Nash, UI’s cornerbacks are thin in the spring.

Former safety Jalen Hoover — a starter since he was a rookie — surely will start at corner after a commendable junior year (and first year) at the position, in which he showed dexterity in reading receivers’ eyes and knocking away balls at the last second.

Hyped-up sophomore David Eppinger, senior Tevin Duke, Seattleite sophomore Jaxon Woodward and lengthy junior Wyryor Noil have time under their belts, but it’s not too extensive. Eppinger played the final few games of 2019 at safety because of depth issues.

Montana transfer Dareon Nash will provide some relief to the group in the fall. The senior, who saw action in 36 games with the Griz in three years, most likely will take Hightower’s old post. The four aforementioned players might be the ones to fight it out for the third cornerback position. There is the possibillity Eppinger just might stay at safety, where coaches said he looked more comfortable late last year.

Safety Sedrick Thomas graduated, so the Vandals must find a new compatriot in the back for locked-in starter Tyrese Dedmon, who materialized as a turnover-forcing ballhawk as 2019 went on. The 6-foot-1, 185-pounder forced four takeaways in UI’s final three games.

The spring could see competition between Boise State transfers. Sophomore Mujeeb Rufai earned time as a backup last year for his football IQ, while junior Eagle High School grad Ryan Swanson worked through an injury that kept him out all season.

On national signing day, Petrino said a couple of defensive backs arriving this fall have a crack at playing time, including Tarynce Antolin, the 4A Greater Spokane League’s defensive MVP out of Ferris High School.

The pass-catchers, too, lost their top guy, and must make up the deficit.

Jeff Cotton, a legitimate professional prospect, capped his two-season UI career with an Associated Press All-American selection and a season in which he tallied 1,076 yards receiving. His 8.8 catches per game ranked first in the Football Championship Subdivision. Cotton was responsible for 54 percent of all yardage among UI receivers.

Standout Cutrell Haywood (512 yards, six TDs), a proficient cutter who’s deadly on quick routes, will be banked on to lead the pass-catchers. Otherwise, there’s work to do. DJ Lee has been relatively quiet for two years, but feels poised for a breakout. Sophomores Mike Noil and Sean McCormick, and Pullman product Jed Byers got a little time.

Former two-year University of Miami track athlete Chauncy Smart should be able to step in and provide immediate, fleet-footed support. The 5-8, 165-pound former South Florida receiver and one of the nation’s top prep sprinters is on campus, and will have two full seasons as a Vandal, during which he’ll be put to use all around the field, Petrino said.

The eighth-year coach is champing at the bit to get some youngsters into the action.

“Last year’s class was really good,” he said, referring to Daseau Puffer, Kaleb Covington, Kyrin Beachem, Bryson Lee and Hayden Hatten, who appears to have been moved from tight end. “We redshirted almost all of them. They really gotta make good strides this spring.”

What Petrino likes about this receiving corps: The mix of sizes and skill sets, from wiry jump-ball players and deep threats, to skitterbugs and do-it-all receivers, like Haywood.

The offensive line became UI’s most depleted group, losing three seniors — including star Noah Johnson — from a hit-and-miss group, which erred with penalties last year, and has struggled to contain pressure the past two seasons.

The Vandals inked five in recruiting, but the only one on campus is Sierra College (Calif.) transfer Chad Bagwell.

Petrino acknowledged the class of linemen is one of his best as UI coach.

In spring, a handful of returners — including senior center/guard Conner Vrba, junior two-year starting guard Matthew Faupusa and Coeur d’Alene tackle Noah Gunn, an Air Force transfer — will seek to earn roles beside junior sure-fire center (or tackle) Logan Floyd, a third-year starter. They’ll be pushed in the fall by a few freshmen with four-year-contributor potential, whom Petrino has lofty expectations for.